Background: Anastomotic failure is one of the most frequent complications in rectal surgery. The present study aims to elucidate the effect of intraoperative lavage with short chain fatty acids (SCFAs) on rectal anastomosis of rats receiving corticosteroids.

Results: Kruskal-Wallis variance analysis showed statistically significant differences between the groups (p<0.001). The bursting pressure of the anastomosis was lower in groups B and D, while it was higher in group C. TNF-a values displayed differences between group D and groups A, C, E.

In management of rectal cancers, very low anterior resection and deep pelvic colorectal anastomosis is practiced more commonly in recent years1. Disruption of the colorectal anastomosis is a difficult complication that leads to significant morbidity and mortality at high cost to patient, the health care system, and society2,3. Anastomotic leaks occur in approximately 3 to 15% of patients undergoing colorectal surgery. Anastomotic dehiscence can appear as a clinically silent radiological finding or cause severe sepsis, associated with abscesses or peritonitis. Its mortality ranges between 10 and 50%4,5. Clinically significant leak occurs in 1.2-10.7% of extra peritoneal rectal anastomosis. Notably, corticosteroids seem to play a very negative role to anastomotic healing6-8.

Controversial opinions exist in the clinical practice concerning preoperative bowel preparation. During the last years however, several articles tend to support that standard preoperative bowel preparation offer no advantage in the postoperative outcome of the patient9. However, several experimental studies insinuate that bowel lavage with short chain fatty acids (SCFAs) improve the healing procedure and increase the bursting pressure of the anastomosis10-13.

The present experimental study aims to elucidate the effect of intraoperative lavage with SCFAs on rectal anastomosis in rats, receiving corticosteroid medication.

Ethical approval to the present study was granted by the General Assembly of the Medical School, of Aristotle University of Thessaloniki (decision No 7571/7-10-02), and also permission was obtained to carry out experiments on rats for the certain study by the Department of Veterinary Services of Thessaloniki (decision No 13/14151/12-20-02). The experimental arm of the study was conducted in the experimental surgical laboratory of A.H.E.P.A. Hospital (consent No 3057/8-20-2004 from the Scientific Council of the A.H.E.P.A. University Hospital).

The animals were anaesthetised with an intramuscular infusion of 2ml of a solution containing 2ml of fentanyl (0.05mg/ml fentanyl citrate, Fentanyl, Janssen, USA), 2ml midazolam (5mg/ml midazolam, Dormicum, Roche, France) and 6 ml of normal Saline 0.9%. Each animal was then cautiously shaved and the abdomen was accessed through a midline incision 4 cm long. The same surgeon performed all the operations. Before the creation of the anastomosis, a lavage was performed (except for the control group) through a purse-string suture at the caecum, created with a 6/0 non-absorbable monofilament polypropylene suture (Prolene, Ethicon, UK). Then, each animal had a 1 cm-long segment of rectum removed, and the continuity of the gastrointestinal tract was restored with one layer end-to-end inverted anastomoses. In order to achieve technically a uniform anastomosis in all animals, an intraluminal probe was inserted through the rectum and then the anastomosis was safely conducted over this metal probe. We used 7/0 interrupted sutures non-absorbable monofilament polypropylene (Prolene, Ethicon, UK), which were passed at a distance of 0.2 cm from the anastomotic line (Figure 1). The abdominal incisions were closed in one layer with 3/0 non-absorbable monofilament polypropylene suture (Prolene, Ethicon, UK) and the animals were left to recover. They were then put in separate cages with free access to water and food until the 4th postoperative day.

Figure 1: One layer end-to-end colorectal anastomosis (b) after intraluminal metal probe insertion through the rectum (a).

On the 4th postoperative day the animals were sacrificed in order to measure the bursting pressure of the anastomosis. For that reason, a 5cm segment of the bowel, which included in its middle the anastomosis, was carefully excised and cleaned from any content. At the one side of this segment a continuous infusion pump with Ringer’s solution was fixed without leaks. At the other end a transducer was fixed measuring the intraluminal pressure at every moment of the experiment. We infused Ringer’s solution with the use of a pump, at a rate of 5ml/min until the burst of the anastomosis. The exact burst pressure was noted and recorded by a monitor.

Upon sacrifice, on the 4th postoperative day, blood was taken directly from the abdominal aorta. It was centrifuged and plasma was prelavated and stored at -80oC until biochemical analysis. By the use of enzyme-linked immunosorbent assay (ELISA), the C-reactive protein (CRP) was measured (CardioPhase HsCRP, DADE Behring, USA), Interleukin (IL)-6 (Quantikine IL-6, R&D Systems, USA) and tumour necrosis factor alpha (TNF-a) (Quantikine TNFa/TNFSF1A, R&D Systems, USA).

Continuous variable were presented as mean ± standard deviation, medians and ranges. Kruskal-Wallis variance analysis was employed for the initial detection of differences between groups. When the pvalues of the variance analyses showed statistically significant, differences between groups then they were analysed with the Mann-Whitney Utest. Statistical analyses were performed with the Statistical Package for the Social Sciences (SPSS), version 13.0 for Windows (SPSS Inc., Chicago, IL, USA). p< 0.05 was considered to be statistically significant.

The results concerning the anastomotic rupture pressure are displayed in Table 2. Kruskal-Wallis variance analysis showed statistically significant differences between the groups (p<0.001). Mann-Whitney Utest was performed displaying statistically significant differences between group A and groups B (p=0.048) and D (p=0.004). The burst pressure was significantly lower in groups B and D (Table 2, Figure 2). Additionally, differences were also observed between group C and group B and D with p=0.006 and p<0.001 respectively. Group C had higher anastomotic rupture pressure from all the other groups. 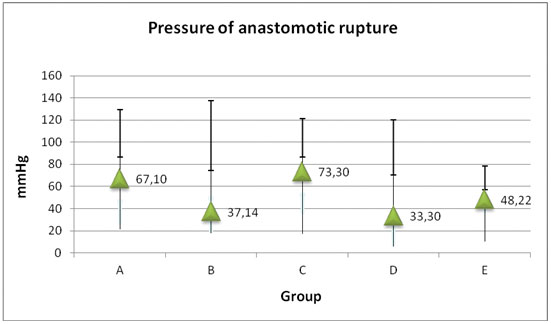 Figure 2: The mean pressure of anastomotic rupture in all experimental groups.

Concerning biochemical analysis both IL-6 values and CRP values were below the detection limit for all groups (IL-6 <0,0148 pg/ml, CRP<0,0145mg/dl) . On the contrary, TNF-a values were detectable. Those results are displayed in Table 3 and Figure 3. Kruskal-Wallis variance analysis showed statistically significant differences between the groups (p<0.001). Mann-Whitney Utest was performed displaying differences between Group D and groups A, C, E (p<0.001, p<0.001, p<0.001 respectively). No differences were observed between all other groups. 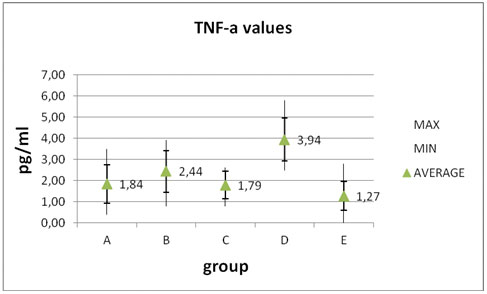 On the first days after colorectal anastomosis, collagen degradation exceeds collagen synthesis, which is due to rapid metabolism of insoluble collagen. Resistance to traction is thus lower until the third and fourth days after surgery, and increases around the seventh day, when collagen synthesis exceeds degradation14,15. In the present study, the effects of SCFAs by intraoperative lavage on colonic anastomosis on the 4th day were checked, in order to maximize the probability of anastomotic rupture. In that way the possible role of SCFAs would be more obvious.

Luminal nutrients in the colon contribute 70% of the energy supply for the mucosa16. Nutrient solutions containing SCFAs and hypertonic glucose have been associated with improved experimental anastomotic healing12. SCFAs, the main fuel used by the colonocytes, are associated with an immediate trophic effect on the colonic mucosa16. Acetate, propionate, and butyrate, the principal SCFAs, are produced by bacterial fermentation from carbohydrates. Polysaccharides such as cellulose, pectins, and hemicelluloses are their major energy substrate17. Sugar may stimulate granulation tissue formation and, besides its bactericidal properties, can also acidify the intraluminal contents by its low pH and reduce edema by its osmotic power18. Although glucose is minimally used as a nutrient by the colonocyte, it could be used as a substrate by bacteria to produce SCFAs. By performing intraoperative lavage, with dextrose or with SCFAs we provide fuel requirements. In that way, we can explain the increased strength of the anastomosis observed when SCFAs were used in the lavage. On the other hand, this mechanism can also explain the decreased strength of the anastomosis observed in the groups lavaged with the saline solution. This solution not only does not contain any nutricient value, since it contains neither sugars nor SCFAs, but additionally it washes out all the nutrients found in the bowel juice before the lavage. In that way, the luminal nutrients are not available to the colonocytes, which leads them to starvation. Starvation leads to impaired anastomotic healing and to decreased bursting pressure.

Medication is a major factor that interferes with healing after trauma. Cortisone is a widely used medication for a variety of diseases; it reduces the initial inflammatory process and delays its subsequent stages. Cortisone also reduces the formation of granulation tissue and inhibits fibroblastic proliferation19. However, the literature presents contradictory data about the effects of cortisone on wound healing8,19-22. Some studies have suggested that wound healing and integrity of the anastomosis are unaffected by steroids, while previous studies have demonstrated that betamethasone retards fibroplasias22,23 and dexamethasone retards the healing process of anastomosis in rats23. In the present study, group D rats, which were treated with methylprednizolone and saline lavage, had lower bursting pressures than the control groups. This is coherent with the majority of the literature that supports that methylprednizolone weakens anastomotic strength. However, in group E rats, which were treated with methylprednizolone and SCFAs lavage, the bursting pressure was higher than in group D rats. This indicates that the intraoperative SCFAs lavage of the colon reverses the effect induced by the methylprednisolone. This is also very coherent to the fact that simple SCFAs lavage increases the anastomotic bursting pressure (group C). The multifactorial action of SCFAs on the colonic mucosa, as analysed in the previous paragraphs, seems to exert a stronger influence on the anastomotic healing than the action of the methylprednizolone.

TNF-α constitutes a proinflammatory cytokine that is produced immediately postoperatively, locally on the site of the anastomosis. TNF-α is reduced after the first 24 hours and is normally zeroed after the end of the healing process. The sustaining high levels of TNF-α after the first 24 hours seems to correlate with retardation of the healing process24,25. The present study seems to perfectly correlate with the previous data since the only group that presented high levels of TNF-α is group D. Prolonged healing time, as proved by high levels of TNF-α, explains easily the lower bursting pressure presented in that group.

The potential systemic effects of steroids are heterogeneous and in a retrospective study was investigated the impact of systemic steroid therapy on surgical outcome after elective left-sided colorectal resection with rectal anastomosis. Although that steroid and nonsteroid patients were not matched perfectly, there were no significant differences in this respect between the 2 groups, especially for the reported risk factors for anastomotic leakage26.

In a recent qualitative systematic review concerning which is the best animal species to mimic clinical colon anastomotic leakage in humans the author concludes that mouse and the pig are considered the best suited animals27. However, the mouse may be preferred for various reasons. Validated models, such as the mouse model, should be used by researchers across centers to allow reproduction and comparison of results27,28.

Authors state that there is no conflict of interest.