Background/aim: The potential association of acute renal infarction with multiple thrombophilic gene polymorphisms and the experience of treatment with tenecteplase are described for the first time in the international literature.
Description of the case: The case of a 50-year old male with segmental acute renal infarction potentially associated with multiple thrombophilic gene polymorphisms is presented. He was thrombolysed with a single intravenous bolus of tenecteplase in a weight-adjusted dose (0.53mg/Kg bodyweight). Within 30 minutes after drug administration, the patient’s symptoms were completely relieved. Patient’s clinical course was uneventful with an acceptable renal function outcome eight weeks post-treatment. The following gene polymorphisms were identified: G455A (b-fibrinogen); C677T; A1298C (methylenetetrahydropholate reductase); T196C (platelet glycoprotein ΙΙΙa); 4G/5G (plasminogen activator inhibitor-1).
Conclusion: Tenecteplase is a safe and simple to use thrombolytic, with favourable pharmacokinetic profile, which might be useful if administered early, especially when local thrombolysis is impossible or unavailable and therefore warrants further investigation in clinical trials.

Acute renal infarction (ARI) is easily overlooked due to non-specific presentation and rarity. Estimated incidence is 0.004% among the emergency department census1. Delayed diagnosis and treatment may lead to loss of renal function. Renal artery occlusion may be iatrogenic or spontaneous due to several underlying conditions that predispose to embolism/thrombosis such as cardiovascular diseases (atrial fibrillation, myocardial infarction [MI], valvular diseases), autoimmune diseases (systemic lupus erythematosus, polyarteritis nodosa), hypercoagulable states (antiphospholipid syndrome, inherited thrombophilia), fibromuscular dysplasia, polycythemia vera and drug (cocaine) abuse2. Inherited thrombophilia is a rare cause. Reports of ARI associated with sporadic thrombophilic gene polymorphisms (TGPs) are scarce3-6. The management of spontaneous ARI remains controversial. Medical management includes anticoagulants and thrombolytics administered systemically or locally1. Tenecteplase is a triple mutant variant of the recombinant human tissue plasminogen activator (alteplase), intended for fibrinolytic treatment in the acute phase of ΜΙ7. However, there are early reports to support non-coronary applications such as in acute lower leg ischaemia8 and pulmonary embolism9. This is the first description of ARI a) potentially associated with multiple TGPs and b) treated with tenecteplase.

ARI was not suspected until radiological studies were performed, leading to a 10-hour diagnostic delay. Abdominal computed tomography (CT) scan revealed segmental left renal infarction (Figure 1a). A single subcutaneous injection of enoxaparin (0.6 IU/ml) was immediately administered and the possibility of emergency systemic thrombolysis with tenecteplase was discussed with the patient, as an off-label potential option, in the absence of any other alternative treatment options such as local thrombolysis. The rational was to avoid further delay resulting from his referral to a distant tertiary centre. 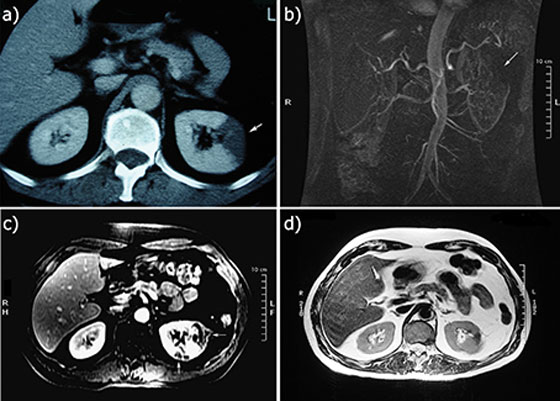 Tenecteplase was administered as an intravenous bolus in a weight-adjusted dose (0.53 mg/Kg) after informed patient’s consent was received, five hours later, leading to a further delay. During this period of time clinical course (pain) deteriorated. Within 30 minutes after the administration of tenecteplase patient’s symptoms resolved completely. No side-effects were observed. Enoxaparin (0.6 IU/ml twice daily subcutaneously) was administered for 15 more days and acenocoumarol thereafter as a life-long treatment [international normalized ratio target (INR): 2.5-3.5].

There was no history of trauma, operation or cocaine abuse. Full cardiologic and rheumatologic evaluation did not provide evidence of an underlying cause such as atrial fibrillation, MI, valvular diseases, autoimmune diseases, antiphospholipid syndrome. Prothrombin time, activated partial thromboplastin time, INR, D-dimer, protein C, protein S, antithrombin III, homocystein serum levels were all within normal range, while there was an increase in fibrinogen level (761 mg/dl). Interestingly, there was a positive family history for early ΜΙs (father, two brothers and one niece). The niece had experienced ΜΙ at her 30s. Both she and her unaffected sister were heterozygotes for factor V Leiden gene polymorphism (G1691A). Based on these, the patient was submitted to genetic analysis for inherited thrombophilia in an outpatient basis.

Diagnosis of ARI may be significantly delayed or even missed1. In the present case, the diagnosis was initially obscured given the cause of admission. However, the fact that the event took place during patient’s admission, led to a relatively early diagnosis, since it is reported that the median time for the patient to visit the emergency department is around 30 hours from the initiation of symptoms1 .

Since arterial thrombosis is usually associated with classical risk factors (smoking, hypertension, dislipidemia, diabetes etc.), routine TGPs screening is not usually warranted in cases of acute arterial thrombotic events11. The overall association among TGPs and the three main arterial complications (MI, ischemic stroke, peripheral arterial disease) is modest. However, if the event occurs at an early age TGPs may play a role, particularly if associated with arterial thrombosis risk factors, (as in the present case: smoking, hypercholesterolemia, cardiovascular disease family history) and screening may be justified11. ARI has been associated with sporadic TGPs such as G1691A3, 4, C677T5,6 and A1298C6 of the MTHFR gene. There is only one report of ARI associated with two TGPs in the same patient (C677T/A1298C; double heterozygote)6. A total of five different TGPs (three newly reported) were detected in the present study (Table 1) and are potentially associated with the appearance of segmental ARI in this case. Although the detection of isolated TGPs might slightly increase the arterial thrombosis risk, their accumulation may act synergically, particularly when associated with risk factors for cardiovascular diseases. It should be acknowledged however, that the evidence based on a single case (although plausible here, as explained above) is strictly speaking not strong enough to establish the hypothesis of such an association.

Guidelines have not yet been established for spontaneous ARI treatment. Generally, medical management is preferred in unilateral cases. In a solitary kidney, bilateral involvement and failure of medical management, percutaneous/surgical interventions have been suggested. Early medical management seems to be beneficial, including thrombolytics (urokinase, streptokinase, alteplase) administered systemically or locally, with or without anticoagulants (unfractionated heparin or low-molecular-weight heparin, followed by coumadin or antiplatelet agents for maintenance)1.

Tenecteplase converts plasminogen to plasmin, primarily in the presence of fibrin. It also binds to fibrin in a thrombus initiating local proteolysis of the thrombus fibrin matrix. It has a 15-fold higher fibrin specificity, 80-fold higher resistance to PAI-1, 6-fold longer half-life in plasma and a higher safety profile compared to alteplase7. These pharmacokinetic properties allow effective administration as an intravenous bolus in a weight-adjusted dose7.

The administration of tenecteplase was based on the necessity for offering the quickest treatment available. Since local thrombolysis was unavailable at the regional hospital, an effort was put to avoid further delay resulting from referring the patient to a distant tertiary centre. On the other hand, this agent has been widely used in the cardiology setting of the hospital.

The observed radiological disease progression three days post-treatment sets the effectiveness of the drug under doubt, since the possibility that the second smaller, posterior, left renal infarction developed after the bolus use of tenecteplase cannot be ruled out. However, it should be noted that it cannot exclude drug efficiency because a) it is in contrast to the fact that the patient was abruptly and permanently relieved 30 minutes post-treatment (strong clinical criterion), b) it may well have happened ante-treatment since patient’s informed consent was delayed five hours after the diagnosis, during which the clinical course (pain) deteriorated; therefore, the possibility that the disease progressed during this period cannot be excluded, c) renal functional outcome is acceptable at eight weeks post-treatment.

On the other hand, the detection of the functional TGP 4G/5G in PAI-1 gene promoter could justify a possible post-treatment radiological disease progression, taking into account that 4G allele is associated with increased serum PAI-1 activity12 and therefore higher incidence of unsuccessful reperfusion after thrombolytic therapy. However, even in that case, final result with tenecteplase would have theoretically been better due to its increased resistance to PAI-1 compared to alteplase7.

It is generally accepted that renal tissue tolerates ischemia for 60-90 minutes in normal temperatures13. However; animal and retrospective human studies have shown that renal function is retained for longer periods of ischemia, due to the existence of collateral circulation. Possible existence of collateral circulation in this patient could have attributed to the final acceptable outcome2,14,15.

The current case represents the first description of the experience with tenecteplase application in ARI. The evidence provided by this case report is not sufficient enough to come into final conclusions regarding the role of tenecteplase in the treatment. Furthermore, studies revealing the relationship between the drug and the gene polymorphisms are still lacking. Based on the current findings, tenecteplase is a safe and simple to use thrombolytic, with a favourable pharmacokinetic profile, which might be useful if administered early, especially when local thrombolysis is impossible or unavailable. Therefore, its value as an alternative agent in the treatment of such cases warrants further investigation in clinical trials.

Authors report no conflict of interest.

The authors would like to thank Mrs D. Pantartzi, Scientific Secretary of the Clinical Trial Office at the Department of Urology, University of Crete Medical School, for the administrative and technical support.