The prevalence of tortuous carotid arteries amounts to 1.9 % in healthy subjects but may rise up to 30 % in patients with cerebrovascular symptoms1,2. A thromboembolic or hemodynamic mechanism is suspected in nearly all symptomatic cases1,2.

A 70-year-old woman was referred to the hospital, due to recurrent incidents of syncope in sitting position. No prodromal symptoms, tonic, clonic movements or amnesia after recovery were experienced. She mentioned the presence of a progressively enlarging pulsating mass in the right side of her neck (Figure 1 A). Her blood pressure was 130/80 mmHg and the electrocardiogram was normal. The physical examination did not unveil any focal neurological defect. Cardiac biomarkers (troponin I: 0.05 ng/mL, D-Dimer: 240 ng/mL) and thyroid-stimulating hormone (2.7 mU/L), were within normal range.

Echocardiogram, brain computed tomography (CT), contrast-enhanced thoracic CT angiogram and Doppler ultrasonography of the carotid arteries did not reveal specific defects, apart from a tortuous course of the right common carotid artery and an enlargement of the right thyroid gland (Figure 1 A, B, C). Moreover, rhythm monitoring (24 hours) revealed an R-R pause of four seconds associated with a new pre-syncope episode. Eventually, a dual-chamber, rate-modulated pacemaker was implanted. In a month’s follow up, the patient remained asymptomatic.

Coiling is an exaggerated elongation of the carotid artery causing the formation of a loop, while an S- or U-shaped dilatation with an angle of < 90 degrees is known as kinking1,2. The sharper the internal angle of the carotid artery, the more reduced the cerebral blood flow. Moreover, the turbulent flow may induce carotid intimal ulceration/rapture, platelet activation, and subsequent cerebral thrombus embolism1,2. In the presented case, there was no sharp bend of the carotid artery, and a hemodynamic mechanism of the syncope may be precluded (Figure 1 B). The proposed thromboembolic mechanism is also unlikely as brain CT findings did not show any relevant signs. On the contrary, a rapid carotid artery elongation following a rapid thyroid gland enlargement must have played a key pathophysiological role (Figure 1 B-G). Neck extension movements and pressure forces from the surrounding tissues may have exerted stress forces on the right carotid artery. Consequently, carotid sinus baroreceptors could be stimulated and a cardioinhibitory reflex could be induced. Finally, all symptoms seem to have completely disappeared, following the pacemaker implantation. 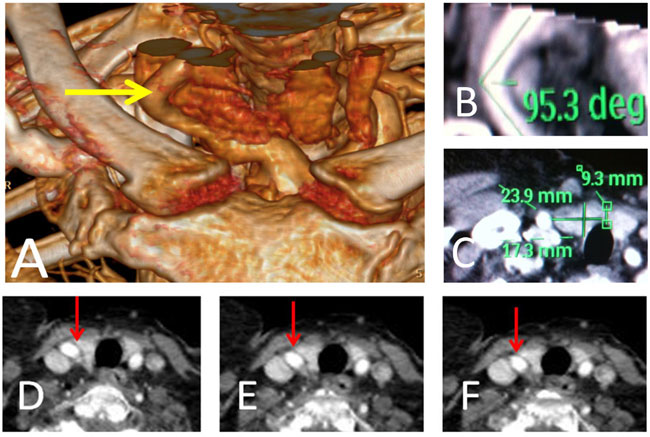 The combination of an anomalous course of the common carotid artery with a concomitant enlarged thyroid gland differentiates this case from all previous reports of neck space-occupying masses and offers further insight into the possible mechanisms of neural mediated syncope.