Skip to content
hippokratia.gr > Volume 18 (2014) - Issue 2 > Syncope in a patient with spontaneous hemorrhage into a thyroid nodule

Background: Spontaneous hemorrhage into a thyroid nodule occurs exceedingly rare and rarely a neck hematoma can develop. We report a case of syncope due to spontaneous hemorrhage into a thyroid nodule during anticoagulant and antithrombotic therapy.
Case presentation: A 64-year-old man was transferred to the emergency department of our hospital because of syncope. His physical examination revealed a 7 x 5 cm hard and painless mass at the left neck region. The neck MRI confirmed a heterogeneous, hyperintense mass in the left lobe of thyroid compressing the trachea and left common carotid artery, internal jugular vein, and vagus nerve bundle. He did not require a surgery in the follow-up. As the hematoma underwent subtotal shrinkage, he remained well without syncope.
Conclusion: Hemorrhage into a thyroid nodule should always be considered in patients presenting with neurally mediated syncope.

We describe a case of syncope due to spontaneous hemorrhage into a thyroid nodule during anticoagulant and antithrombotic therapy.

A 64-year-old man was transferred to the emergency department of our hospital because of syncope. The patient had the complaints of nausea and vomiting after dinner while sitting at home and lost consciousness for a few minutes. A day before admission, he reported feeling a hard swelling on his left side of neck about 5-6 cm in diameter. The patient denied any history of trauma. The medical history was remarkable for hypertension, diabetes mellitus and coronary artery disease, but he did not have a history of nodular goiter. The patient was taking clopidogrel (75 mg once daily), acetylsalicylic acid (300 mg once daily) and low molecular weight heparin (60 mg enoxaparin once daily).

On arrival at the emergency room, his physical examination revealed a 7 x 5 cm hard and painless mass at the left neck region. He did not have respiratory distress. His blood pressure was 90/60 mmHg and his pulse rate was 100 beats per minute and regular. The remainder of the examination was normal.

The patient underwent sonography of the neck revealing a large hemorrhagic thyroid nodule in the left lobe of thyroid measuring 73 x 54.5 x 59.5 mm which leads to displacing of the left lobe to medial and superior side (Figure 1). The neck MRI confirmed a heterogeneous, hyperintens mass in the left lobe of thyroid compressing the trachea and left common carotid artery, internal jugular vein, and vagus nerve bundle (Figure 2). These findings suggested neurally mediated syncope due to the spontaneous hemorrhage into the thyroid nodule. 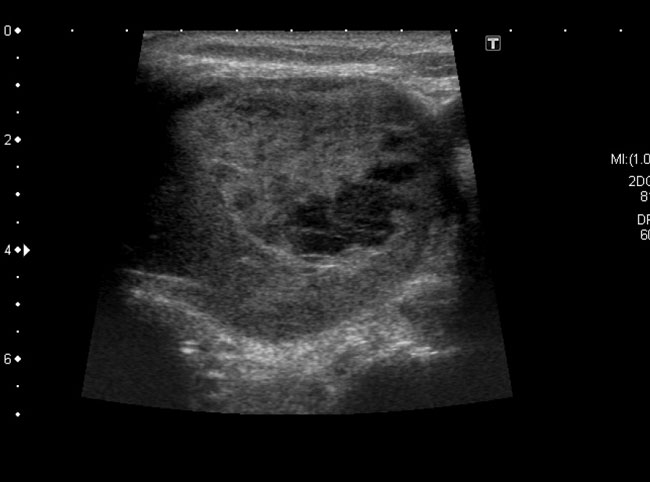 Figure 1: Neck sonography showing a large hemorrhagic nodule in the left lobe of thyroid measuring 73 x 54.5 x 59.5 mm which leads to displacing of the left lobe to medial and superior side. 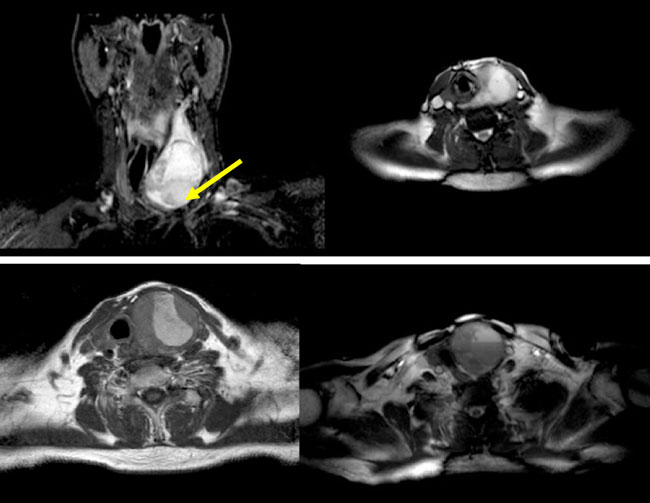 Anticoagulant and antithrombotic therapy were discontinued. The patient was followed closely by repeated sonographic examinations and he did not require a surgery in the follow-up. As the hematoma underwent subtotal shrinkage, he remained well without syncope. One month later, neck sonography demonstrated the total resorption of thyroid hematoma (Figure 3). 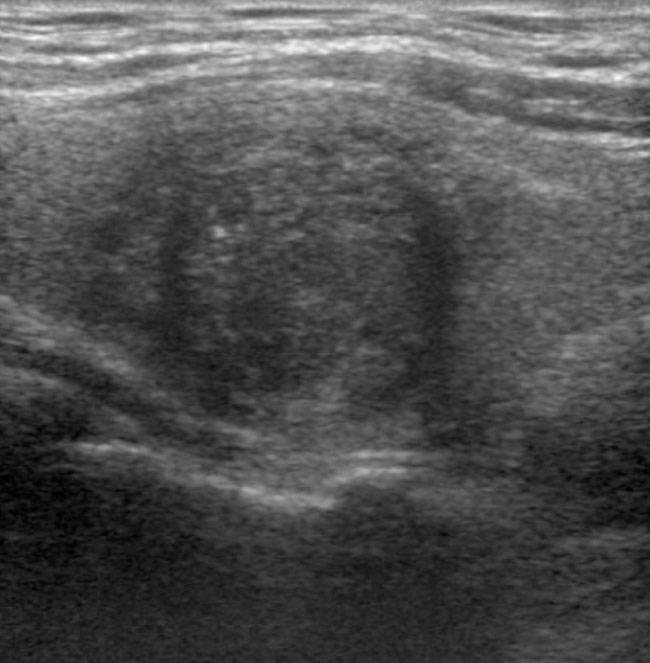 The syncope caused by spontaneous bleeding into a thyroid nodule is not a common clinical finding, but can be a reason of admission as a life-threatening symptom and the diagnosis can be challenging. To the best of our knowledge, this is the first case in the literature.

Four cases of neck hematoma following FNA have been reported to date. Two of them presented with acute respiratory distress and only one of them was receiving 325 mg aspirin/daily at the time of biopsy5-8.

Spontaneous hemorrhage into a thyroid nodule is also rarely reported in the literature. One of them who was taking aspirin presented with acute airway obstruction and an emergency subtotal thyroidectomy was performed2. Another case presented with a large neck mass causing dyspnea9. Two cases who were receiving anticoagulant therapy presented with thyrotoxicosis due to the hemorrhage into a thyroid nodule and did not require surgery3,4. Recently, thyroid hemorrhage causing airway obstruction has been reported after intravenous thrombolysis with recombinant tissue plasminogen activator administered for acute ischemic stroke10. Because of the tracheal and vascular compression, total thyroidectomy was performed.

Thyroid hemorrhage would be due to abnormal vessel anatomy with resultant weakening of the veins and arterio-venous shunts into the nodule that may divert blood with high pressure to these fragile veins, causing in extravasation of blood into the nodule11. It is reported mainly in patients under anticoagulant therapy8. In our patient, we think that aspirin, clopidogrel and low molecular weight heparin contributed to the hemorrhage into the thyroid nodule.

In our patient, hemorrhage into the nodule in left lobe of thyroid compressed the left common carotid artery, internal jugular vein, and vagus nerve bundle and further precipitated a syncope. We consider that the cause of syncope in the present case was neurally mediated syncope12. We thought that the mechanism linking syncope and the neck mass in the present patient was the overstimulation of the carotid sinus due to the pressure on. Syncope is common in the general population and neurally mediated syncope is the most frequent cause13. It is usually preceded by prodromal symptoms of autonomic activation such as sweating, pallor and nause. Syncope due to the orthostatic hypotension occurs upon standing and is defined as an abnormal decrease in systolic blood pressure upon standing. In our case, syncope occured while sitting at home after dinner. Therefore we thought that orthostatic hypotension was not the cause of syncope. Arrhythmias and structural cardiovascular diseases can also cause syncope. Cardiovascular syncope must be considered in the presence of definite structural heart disease, family history of unexplained sudden death, sudden onset palpitation immediately followed by syncope and ECG findings suggesting arrhythmic syncope. Our patient had findings of previous anterior myocardial infarction on the electrocardiogram and we did not observe arrhythmia at the admission and follow-up period. Additionally, echocardiography revealed normal findings. European Society of Cardiology also recommends neurological evaluation in patients in whom loss of consciousness is suspected to be epilepsy13. Our patient had no neurological deficits on examination.

Conservative management was reported to be useful in patients with hemorrhage into the thyroid nodule14. Emergency surgery on the day of admission was not indicated for our patient, because he showed no signs of dyspnea or stridor. Increasing size or compromise of airway integrity should be indications for early intubation and neck exploration. He was followed closely by repeated sonographic examinations and observed no increase in the size of hematoma. Therefore, we think that if the patients do not have any life-threatening symptoms like airway obstruction because of hemorrhage into a thyroid nodule, they may be safely observed. Early surgical decompression should be considered in acute airway compromise2.

The present case is the first report of spontaneous hemorrhage into a thyroid nodule presenting with neurally mediated syncope. Careful history taking and physical examination (i.e., mass at the left neck region) led us to the diagnosis without delay.