Background: Vascular complications of cardiac catheterization have increased in line with increasing number of percutaneous interventions. Open repair is the standard method of treatment for true and false aneurysms of femoral artery. We report results of patients operated due to femoral artery pseudoaneurysm after cardiac catheterization.
Methods: Data from 12,261 patients who underwent percutaneous intervention for cardiac catheterization between January 2003 and January 2013 were evaluated. Diagnosis of pseudoaneurysm was established mainly by doppler ultrasonography in patients with complaints of pain and hematoma at the intervention site. Pseudoaneurysms less than 2 cm in diameter were treated non-operatively and were followed up by regular ultrasonographic examination at the outpatient clinic. Pseudoaneurysms with a diameter of 2 cm or more underwent primary repair. All patients were followed up for one year.
Results: We detected 55 (0.44%) patients with femoral artery pseudoaneurysm and 42 of them were operated. The mean age was 60.7 ± 6.3 years. Thirty nine (94.5%) patients underwent elective surgery, three (5.5%) patients were operated on under emergency conditions. Operation was performed under local anesthesia in 32 patients, under local anesthesia and sedation in eight patients, and under general anesthesia in three patients. Location of the pseudoaneurysm was the superficial femoral artery in 29 (69%), the common femoral artery in nine (21.4%), and the deep femoral artery in four (9.6%) patients. No limb loss occurred, no patient died and no recurrence was detected during the follow up.
Conclusions: Performing vascular reconstruction before the rupture of pseudoaneurysm is important in terms of morbidity and mortality. We concluded that surgical repair in pseudoaneurysms larger than 20 mm is safe and essential.

Since the femoral artery is used for percutaneous cardiac interventions in general, most of the complications are associated with the femoral artery2,3. These complications include bleeding, haematoma, pseudoaneurysm, arteriovenous fistula, and arterial occlusions. Among these, pseudoaneurysms are of particular importance due to the facts that they are the most frequent complications and that they may be overlooked because they do not cause any complaints in more than half of the patients.

The aim of this retrospective study was to evaluate cases undergoing surgery in our clinic due to femoral artery pseudoaneurysm (FAP) following cardiac catheterization in accordance with the literature data.

Data of 12,261 patients who underwent percutaneous cardiac catheterization between January 2003 and January 2012 were evaluated retrospectively. Diagnosis of FAP was established by doppler ultrasonography performed in patients with complaints of pain and haematoma at the intervention site. While doppler ultrasonography was adequate in establishing the diagnosis of many patients, the diagnosis was also verified by magnetic resonance (MR) angiography in seven patients (Figure 1). Pseudoaneurysms less than 2 cm in diameter were treated non-operatively and were followed up by regular ultrasonographic examination at the outpatient clinic. Pseudoaneurysms with a diameter of 2 cm or more underwent primary repair. All patients were followed up for one year. 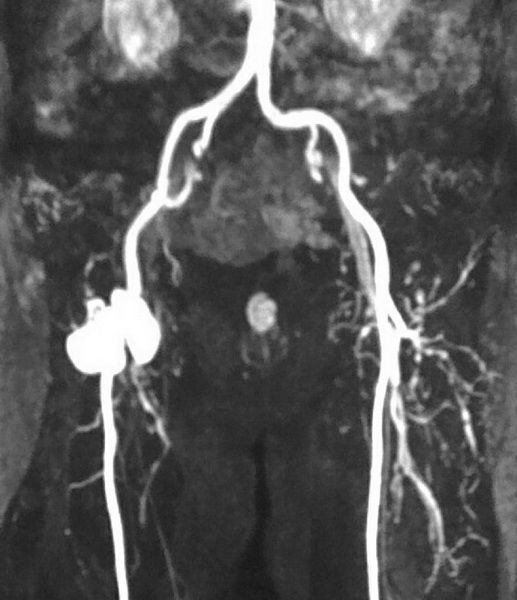 Following appropriate anesthesia, the patients were placed in the supine position. The common, deep, and superficial femoral arteries were explored through a vertical incision in the femoral region, encircled with silastic loops and controlled. Heparinization was performed with 5,000 U standard heparin intravenously by maintaining the activated clotting time (ACT) of over 200 seconds in case when it is necessary to clamp the artery in order to repair the arterial defect. Pseudoaneurysm pouch was accessed through a place close to the possible intervention site, and the bleeding focus was detected. Intervention site on the artery was primarily repaired with 5-6/0 polypropylene suture. After bleeding control and a small hemovac drain was placed, tissues were closed in layers and the procedure was ended.

Among 12,261 patients who underwent percutaneous intervention for cardiac catheterization, pseudoaneurysm was detected in 55 (0.44%) patients. While surgical procedure was performed on 42 (76%) of these patients, local compression therapy was performed on 13 (24%) patients with pseudoaneurysms less than 2 cm in diameter and they were followed by regular ultrasonographic examination. None of the patients with a femoral artery pseudoaneurysm less than 2 cm required further intervention at the follow up. The mean age of these 55 patients [39 (70.9%) females and 16 (29.1%) males] was 60.7 ± 6.3 years (23-84 years). Of them, 21 had pulsatile mass, 19 had pain, four had extremity ischemia, and three had rupture during admission. The extremity ischemia resolved in all four patients after operation, since the pseudoaneurysm sac was compressing the superficial femoral artery and symptoms were due to mass effect. Infection due to Escherichia coli (E. coli) was observed in one of the ruptured pseudoaneurysms. Appropriate antibiotic treatment was commenced according to tissue culture results. This patient healed after antibiotic treatment without any problem. While 39 (94.5%) patients underwent elective surgery, three (5.5%) were operated on under emergency conditions. Forty-two (76.4%) of 55 patients developed pseudoaneurysm following coronary stent implantation, whereas 13 (23.6%) developed pseudoaneurysm after coronary angiography. Operation was performed under local anesthesia in 32 patients, under local anesthesia and sedation in eight patients, and under general anesthesia in three patients (Table 1). In five patients, repair was performed by clamping the common femoral artery under heparinization.

Complaint of the patient is the most important sign for the diagnosis of FAP. A patient complaining about pain and swelling at the intervention site should be paid attention and evaluated by a careful physical examination and Doppler ultrasonography. The indications for operative treatment are ruptured aneurysm, limb ischemia, vein, artery or nerve compression signs, infection, cutaneous ischaemia over an aneurysm, large aneurysm diameter and failed conservative management12. Although pain and swelling are the most common findings, signs secondary to pseudoaneurysm such as neuropathy due to local nerve injury, thrombosis, extremity ischaemia due to embolization, pulsatile mass, rupture, and skin necrosis and associated infection may also be frequently encountered. In the present study, the most common complaints were pain and pulsatile mass. In four patients, the pseudoaneurysm sac was compressing the superficial femoral artery and symptoms were due to mass effect. Moreover, three patients presented to the emergency service with bleeding due to pseudoaneurysm rupture in the early period after hospital discharge and were operated on under emergency conditions. Additionally, one patient had pseudoaneurysm infection of which E. coli was the causative agent.

Timing of elective surgery and decision-making for emergency surgery in pseudoaneurysms are of great importance. Since these patients have an underlying coronary artery disease, repair of pseudoaneurysm before its rupture or before causing distal embolization play an important role on the morbidity and mortality rates. In the present study, 39 (94.5%) patients underwent elective surgery, whereas three (5.5%) required surgery under emergency conditions. One of these patients was in hypovolemic shock caused by rupture on the 22nd day after hospital discharge. No mortality or limb loss were observed in the present study; this might have resulted from early diagnosis and surgical intervention performed for pseudoaneurysms.

Open repair is the standard method of treatment for true and false aneurysms of femoral artery13. Current treatment of FAP also includes non-surgical treatment approaches such as ultrasound-guided thrombin injection, ultrasound-guided compression, biodegradable collagen injection, coated stents, coil embolization, and use of various vascular closure devices3,7,14-16. There are situations in which these methods may be either advantageous or disadvantageous. There are several complications of thrombin injection: femoral artery thrombosis or embolism, femoral vein thrombosis, infection within aneurysm sack, allergic reactions including anaphylactic shock12. Ultrasound guided compression is also another treatment of choice, but it has major limitations such as patient intolerance despite sedation and operator’s ability to maintain adequate pressure12. Predictors of negative outcome also include large pseudoaneurysm, obese patients and patients who are receiving anticoagulants3,12. Nevertheless, the most important factors of treatment approach are the diameter of pseudoaneurysm and co-morbidities. The patients of the present study were mostly obese with a mean body mass index of 33.7 ± 6.3 kg/m2. Moreover, the mean diameter of the pseudoaneurysms was 36.8 mm. Preferential surgery was planned due to the fact that success of non-surgical treatment approaches is generally low in such patients, the diameter of pseudoaneurysm was large, and three patients developed rupture. Small pseudoaneurysms with less than 20 mm in diameter arising from arterial puncture disappear within 4 weeks via spontaneous thrombosis17-19. We as well performed local compression in the pseudoaneurysms that were detected in the early period and had a diameter smaller than 20 mm, and observed pseudoaneurysm thrombosis on ultrasonography performed during follow-up in all patients. These patients had no complication at follow-up.

In conclusion, femoral arteries are the most common sites of complications such as pseudoaneurysm and haematoma developed after diagnostic or therapeutic interventions. Pseudoaneurysms are important complications that may cause important morbidity and mortality such as potential local pressure, rupture, bleeding, infection and thrombosis, which may be threatening to the related extremity, and even to the patient’s life. Although pseudoaneurysms can be treated by a simple surgical technique under local anesthesia, they may increase duration of hospital stay, morbidity and mortality. Our opinion is that performing surgical therapy under elective conditions, without any delay in the period when the patient’s general status is available, would not only increase the success of surgery, but also minimize perioperative complications.

The authors did not received any financial support for the research or authorship.

Institutional ethical approval has been taken for the study from the local ethics committee of Trakya University.