External beam radiotherapy with high doses provokes many acute skin reactions, such as erythema and moist desquamation. Many topical preparations are used in radiation oncology departments in the skin care. Sucralfate humid gel, a colloidal physical form of the anti-ulcer drug sucralfate, promotes epithelial regeneration and activates cell proliferation. Based on this knowledge, we performed a non-randomized clinical trial to evaluate the efficacy of topical su-cralfate gel in 30 breast cancer patients receiving postoperative accelerated hypofractionated photon beam therapy. The comparison was performed with 30 patients as historical controls. The acute reaction of the skin was significantly lower in the group receiving the sucralfate gel (p<0.05, Mann Whitney test), while 90% of the patients had no evidence of radiation induced skin toxicity. There was no sucralfate gel related toxicity reported by any patient in this study. More patients in a randomized way are needed for more definite results

The common side-effect of radiotherapy of breast cancer patients is the acute radiation injury of the skin. It is ranging from redness-erythema to dry or wet desquamation. On rare occasions, it may progress to deep ulceration1. The severity of the reaction depends on the energy, the type of radiation and the type of the skin2. The concomitant use of chemotherapy it may worsen the reaction. As erythema is not usually experienced until radiation doses of around 2,000 cGy3, patients having palliative treatment at low doses will likely not exhibit any skin reaction and may therefore, not need any specialized skin care instructions. However, in breast cancer irradiation, skin care is one of the main aspects of radiation oncologists for their patients, since prescribed dose is high up to 50-60 Gy especially in hypofractionated schedules4.

In accelerated radiotherapy treatment, the acute skin reactions may limit the total dose or causing breaks of radiotherapy.

Sucralfate is effective in the treatment of gastric and duodenal ulcers. Sucralfate, a non-absorbable substance, is the basic aluminium salt of sucrose octasulphate that acts directly on prostaglandin synthesis; it promotes angiogenesis and binds epidermal growth factor to tissues5,6. Also, it has an anti-inflammatory effect by inhibiting gamma interferon and interleukin-2. In particular, an original colloidal form of sucralfate, known as sucralfate humid gel, has been proposed for more effective ulcer treatments, opening also to the dermal applications. In fact, topical administration of sucralfate humid gel has been shown to be effective in epithelial wound healing and other skin diseases7.

Therefore, we conducted a non-randomized clinical trial aimed to evaluate the efficacy of a sucralfate humid gel topical preparation on the skin irritation during radiotherapy.

Thirty patients with breast carcinomawho were treated with breast conservation surgery and chemotherapy underwent adjuvant radiotherapy for the breast and in some cases for the supraclavicular area. Patient characteristics and the irradiation schedules are shown in Table 1. The contouring was performed by the Prosoma system while the treatment planning system used was the ECLIPSE (Varian Medical, USA). Irradiation was given with a 6MV LINAC 600C Varian. We used the accelerated hypofractionation scheme based on the Whelan et al. trial with 2.66 Gy per fraction8.

Each patient underwent a virtual CT-simulation, in supine position, using dedicated devices. The patient’s arms were raised above the head using an arm support in carbon fiber (Sinmed©, Reeuwijk, The Netherlands). For treatment planning, a CT scan covering a region from the 6th cervical vertebra to the middle part of the abdomen was obtained for each patient. The patients were scanned with 5 mm slice thickness in simulation CT scan and the CT datasets were transferred to the Prosoma® System through the DICOM network. All contouring of target volumes and normal structures – organs at risk (OARs) were performed in the Prosoma System. According to ICRU9, the following structures were delineated: clinical target volume (CTV), planning target volume (PTV), ipsilateral lung, heart (if left sided) and spinal cord.

In order to account for setup uncertainties, one adds a setup margin to the ITV to generate a PTV.

The CTV, PTV and OARs were outlined on all CT slices. The CTV was expanded to a PTV with 5 mm, with a constraint reverse expansion of 4 mm to the skin surface to avoid potential skin toxicity10. The PTV provided a margin around the CTV to compensate for the variability of treatment setup and motion of the breast or chest with breathing10.

Thirty patients from our department receiving the same irradiation schedule in terms of hypofractionated radiotherapy with the same technique9,10, who received only humidifier creams, were randomly selected with a pseudo-random method12,13 and finally entered into the analysis for a non-randomized comparison as historical control (Table 1). The inclusion criteria were: patients with breast conservative surgery after chemotherapy, stage T1,2N0,1M0, without any ulcerative disease in the breast or front chest wall or either in the supraclavicular area. The body mass index (BMI) of all patients in both groups is shown in Table 1.

The equivalent14 dose (EQd) to the breast was calculated by using the L-Q radiobiological model. In all cases the EQd at the breast was not exceeding 58Gy at the skin. The prescribed dose was given according to the boost vs no boost trial of EORTC15.

The statistical analysis, assessing differences between the two Groups concerning the occurrence of skin reactions, was performed with the SPSS ver 10. software. The non-parametric comparison was done with the Mann-Whitney test. Any incidental difference between the two groups was done by the chi-square test. In all cases, statistical significance was set at the level of 0.05.

There was no statistical significance between the two groups (p>0.05), in terms of patients’ characteristics at entry.

The distribution of the EORTC/RTOG acute toxicity grading scale in the two Groups in our study showed a highly significant difference in favor of Sucralfate gel (Table 2): 90% of the 30 patients treated with Sucralfate gel were symptoms-free, against 53% of the 30 controls (p<0.001). In group A, only one woman presented grade-2 of toxicity; we increased the dose of the gel from one- to three-times per day, and in 5 days the toxicity grading was reduced to zero. It is important to mention that this patient did not follow all safety instructions, since she was exposed to sun during the radiotherapy.

There was a significant difference in terms of mean EORTC/RTOG acute toxicity grading score between the two groups (p<0.05, Mann-Whitney test), as shown in Figure 1. 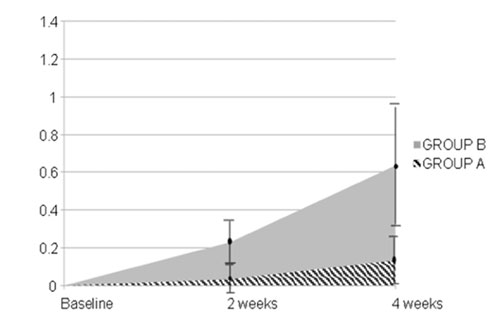 There was no gel-related toxicity reported by any patient in this study. A typical image with a mild erythema (grade I) at the completion of radiotherapy, is shown in Figure 2. 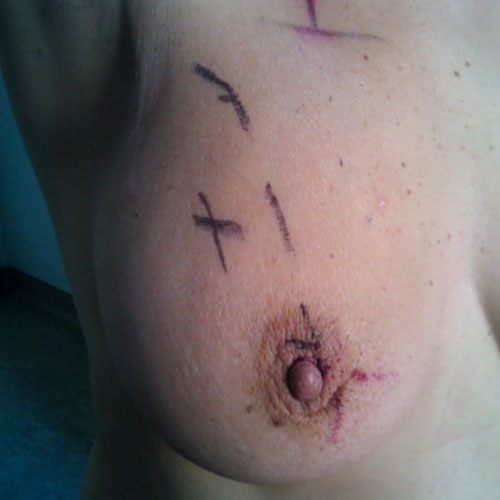 Figure 2: Mild erythema in a woman after the completion of radiotherapy, with an application of sulfacrate gel once per day during breast irradiation.

Studies investigating sucralfate have included both prevention and management trials as well as oral and topical routes of administration16. Sucralfate has been shown to stimulate cell growth in rats and has been reported to have an anti-inflammatory effect on gastrointestinal mucosa6,17. Two intra individual prevention trials were conducted using patients as their own controls18,19. Evensen et al. In a previous report dedicated to the organic sucralfate component, skin reactions in patients with head and neck cancer, randomized to receive either sodium sucrose octasulfate (Na SOS) or a placebo, were assessed by Evensen et al18. These authors reported no difference in erythema, but the placebo group had less moist desquamation resulting. Maiche et al19 on randomized women with breast cancer receiving the application of sucralfate cream or a base cream twice daily during 5 weeks of radiation reported a significant reduction in the development of grade-2 skin reactions with more rapid healing with the sucralfate cream. The conflicting results between these two trials may be related to the different patient groups and treatment doses and the different forms of sucralfate used.

A later study by Wells et al20 randomized 357 patients with head and neck, breast, or anorectal cancer to receive either aqueous cream, sucralfate cream, or no cream from the start of treatment. Outcome measures included the measurement of acute skin toxicity or grade (modified RTOG score), erythema readings using reflectance spectrophotometry, a quality-of-life score, and symptoms including pain, itching, burning, and sleep disturbance. No significant differences were found between the treatment arms. The researchers concluded that there was no benefit from a prophylactic application of a cream to the treatment area. More significantly, the authors identified several risk factors related to more severe skin reactions, suggesting the need for further study in patients at higher risk. Two studies assessing the effectiveness of oral sucralfate found no benefit of the prophylactic use of sucralfate in reducing the degree of skin reactions in patients receiving head and neck cancer or in reducing any late toxicity on the rectum in patients receiving radiation for prostate cancer21,22. Delaney et al23 stratified patients by cancer diagnosis and randomized patients to receive 10% sucralfate in sorbolene cream or sorbolene alone for the management of greater than grade 3 (RTOG criteria) moist desquamation. Sorbolene is a cream composed of water and oils often containing 10% glycerin. No differences were found in the measurement of pain or in time to healing between the two products, although the study was closed early because of limited accrual. The researchers also identified that significant heterogeneity existed between the two treatment groups.

In our study, the sucralfate preparation was made by a peculiar physical form of sucralfate, named sucralfate humid gel. Sucralfate humid gel is a colloidal form of the sucralfate drug characterized by a very low size of particles that possess the characteristic to be bioadhesive and to give rise to a aqueous gel topical formulation simply by dispersing the substance in water at 25% w/v. These characteristics favor the deposition of a thin layer of topical product on the skin and the persistent coverage of the treated site and a deep contact between product and skin. Using this topical product, the mean value of radiation-induced toxicity was significantly lower in the sucralfate gel group. Surprisingly 27 out of 30 patients presented no radiation induced toxicity. The maximum toxicity was presented in both groups at the end of the treatment while in the sucralfate gel group no grade-3 toxicity was noted. In another hypofractionated study by Deantonio et al24, the incidence of acute toxicity was 60% for grade-1 and 22% for grade-2, while in our study the incidence of acute toxicity was 7% and 3%, respectively. In our study almost half of the patient underwent postoperative chemotherapy, fact that might have affected the radiation induced dermatitis. However, Hijal et al. in a previous hypofractionated study reported no impact of adjuvant chemotherapy in the skin toxicity25.

In conclusion, sucralfate humid gel, as a skin radioprotector, managed to reduce the radiation-induced skin toxicity as low as 10% in our patients even under a hypofractionated irradiation schedule. However, the small number of patients and the non-randomized study did not allow to draw definite conclusions for the radioprotection effect of sucralfate gel against radio-dermatitis. Further randomized studies with more patients stand in need to confirm our good results in women under hypofractionated radiotherapy for breast carcinoma.