Background: Struma ovarii is the presence of thyroid tissue as a major cellular component in an ovarian teratoma.
Case report: A 46-year-old old woman, with a palpable mass at the anatomical position of the right adnexa known for the preceding 3 years underwent a total abdominal hysterectomy and bilateral salpingo-oophorectomy. Histology reported struma ovarii.
Conclusion: Struma ovarii is a rare tumor of the ovaries and its clinical appearance may vary: it may be asymptomatic, mimic malignant ovarian tumor, or present with symptoms of hyperthyroidism and, in rare cases, it can even be a malignant tumor.

Struma ovarii is the presence of thyroid tissue as a major cellular component in an ovarian tumor, nearly always a teratoma. Malignant struma ovarii is very rare. Struma ovarii is mostly common between the ages of 40 and 60 years and accounts for approximately 3% of ovarian teratomas and 0.3% of all ovarian tumors1. Women with struma ovarii usually present with a pelvic mass or, less frequently, with hyperthyroidism or ascites. Due to its ultrasound morphology, which is quite similar to that of malignant ovarian carcinoma, most struma ovarii cases are often operated on with laparotomy2. The physician should be very cautious consulting the patient since the proper treatment and the prognosis of this rare neoplasm is not well defined.

A 46-year-old woman gravida 5, para 3, was admitted to our clinic for further investigation and treatment of a palpable mass at the anatomical position of the right adnexa, known for the preceding 3 years. Her past medical and family history were unremarkable, with the exception of a psychotic syndrome and 3 cesarean sections. At the time of admission, physical and pelvic examination were normal, apart from a humped mass extending from the right adnexa which had the size of a tangerine. Transvaginal ultrasound revealed a right ovarian tumor 7 x 6 cm. Prior to surgery the patient didn’t show any symptoms of hyperthyroidism. Laboratory results were unremarkable.

The patient underwent a total abdominal hysterectomy and bilateral salpingo-oophorectomy (TAH/BSO). Intraoperatively, the uterus, left ovary and the fallopian tubes appeared normal, while there was an irregular humped mass of the right ovary, the size of a tangerine, with cystic elements. Its texture appeared smooth and there were no palpable regional lymph nodes. Intraoperative frozen section biopsy reported struma ovarii.

Microscopically, the tumor displayed a lobular growth pattern and was composed of thyroid follicles that resembled normal thyroid tissue. The cells were cuboidal to columnar and displayed a prominent component of cells with oxyphilic cytoplasm. The follicles contained dense colloid with birefringent calcium oxalate crystals. The nuclei were typically round to oval with minimal cytologic atypia and rare mitotic figures. The intervening stroma was scant, with extensive edema (Figure 1). 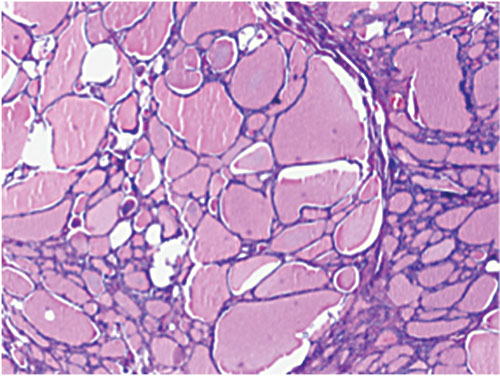 Postoperative course was uneventful and the patient was discharged from the hospital on the seventh post-operative day. During the patient’s four year follow up no complications occurred.

Differential diagnosis between struma ovarii and malignant tumor is difficult due to their morphological similarities combined with the rarity of struma ovarii. The patient reported was asymptomatic. Preoperatively, the clinical diagnosis of struma ovarii is possible in patients having hyperthyroidism, but only 8 % of patients with struma ovarii present with clinical hyperthyroidism3. In case of a definite preoperative diagnosis laparoscopic surgery can be implemented, but the surgeon must be careful not to rapture the tumor intra-abdominally to avoid dissemination, which could lead to malignancy. Laparoscopic approach involves either oophorectomy, which is recommended, or enucleation of the tumor, which is a fertility-preserving procedure that could be performed in selected cases1. When laparoscopy is performed and malignant struma ovarii is confirmed postoperatively, a second staging procedure should be performed either via laparotomy or laparoscopically4.

Benign struma ovarii might present with ascites mimicking ovarian malignancy5,6; however, in rare cases this tumor could be malignant7. In selected cases of malignancy, fertility preserving treatment could be taken under consideration8. After completion of childbearing, though, TAH/BSO is recommended with sampling of pelvic and para-aortic lymph nodes, peritoneal cytologic washing and partial or total omentectomy2. Additionally, it is proposed that thyroidectomy is necessary in order to exclude a primary carcinoma of the thyroid gland presenting with ovarian metastasis and to facilitate follow up with thyroglobulin measurements and Iodine-131 whole body scan9,10.

Follow up for malignant struma ovarii is not well defined due to the fact that the disease is very rare, and it is based on the follow up for ovarian cancer and thyroid cancer guidelines4.

In conclusion, the appropriate course of treatment has to be selected bearing in mind the possibility of misdiagnosed malignancy and in most cases it should be an explorative laparotomy and removal of the mass. Fertility sparing treatment is an option but patients should be selected carefully.