Symptoms and signs of female urethral diverticulum are diverse, resulting most of the times in delayed diagnosis and mismanagement1. We hereby report a rare clinical manifestation of the disorder presenting with stress urinary incontinence (SUI).

A 39-year-old woman presented to our department with a history of stress urinary incontinence for 2 years. There was no history of pelvic radiation, trauma or previous vaginal or urologic surgery. A thorough physical examination was consistent with a large urethral diverticulum prolapsing into the vagina. She had noticed this mass occasionally coming out of vagina on straining. Cystourethroscopy revealed the orifice in the left posterolateral urethral wall. A tiny fistula of the diverticulum wall was also noticed. Injection of blue de methylene revealed that this fistula opening into the vagina was the cause of urinary incontinence during stressful events, due to elevation of the pressure within the diverticulum (Figure 1). Trans-vaginal excision of diverticulum was performed using a 2-layer closure of the urethra. Postoperatively, the patient. reported resolution of symptoms. No recurrence was detected at 6 months’ follow-up. 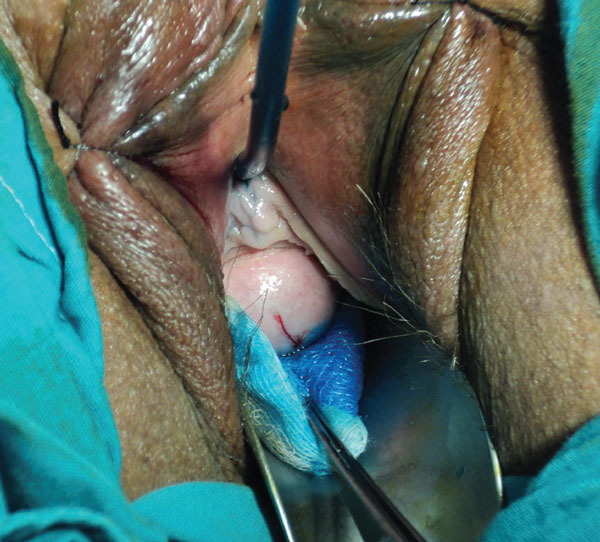 Figure 1: The external view of the diverticulum and presence of blue de methylene into the vagina during cough test.

The classical triad of dysuria, dyspareunia and dribble, historically described as the “three Ds”, are present in only 23% of female urethral diverticulum cases2. Urinary incontinence is not a common symptom and all the three types of total, urge or stress urinary incontinence have been previously described1-3. The latter seems to be related either with big diverticula or with de novo SUI after surgical correction of the disease1.

The tiny fistula in the urethral diverticulum of our patient, may explain a different mechanism for the coexisting stress incontinence. A possible valve mechanism in the diverticula wall, although could act protectively against permanent leakage, was not able to prevent urine from flowing when intra – diverticulum pressure was increased. Therefore, there was no need for simultaneous anti-incontinence surgery due to the fact that there was not true SUI but inducible by the fistula. Finally, as previous surgery, trauma and radiation was not present in patient’s history, other potential factors like vaginal atrophy, skin ulceration from immediate contact to clothing or diapers, vaginal intercourse and pessary use, could be reasons for this result.

Authors would also like to thank Stefania Lymperi and Ioannis Perdikis for their invaluable help.