We report two cases of Klebsiella oxytoca bacteremia.
Case 1 was a 56-year-old man who was transferred to our hospital by ambulance due to diarrhea and general fatigue. On arrival, he was clearly conscious. However he was in septic shock. We injected broad spectrum antibacterial agents and started intensive care. Though intensive care included continuous hemodiafiltration (CHDF), he died 22 hours after admission.
Case 2 was a 69-year-old man with a history of gastrectomy for gastric cancer. He had been admitted to a previous hospital due to ileus. His ileus tube was removed on the eighth day, and he then developed a fever of 38 ºC on the fol-lowing day. He went into shock and became unconscious; he was therefore transferred to our hospital. We diagnosed septic shock and disseminated intravascular coagulation (DIC). We injected broad spectrum antibacterial agents, and recombinant thrombomodulin alpha (rTM). Although he was started in intensive care, his hemodynamics were unsta-ble on the day following admission. Extracorporeal membrane oxygenation (ECMO) and intra-aortic balloon pumping (IABP) were started to maintain his hemodynamics. His condition gradually improved, and he was transferred to the previous hospital for rehabilitation on the 28th day.
ECMO for septic shock in adults is unusual; however ECMO can be introduced even in patients with severe sepsis under careful monitoring. The new anti-DIC agent rTM is useful for safe driving of ECMO in patients with DIC.

Klebsiellae are opportunistic pathogens that cause a wide spectrum of severe diseases such as pneumonia, urinary tract infection, soft tissue infection, and septicemia1. However, Klebsiella oxytoca has been isolated from human clinical specimens to a much lesser degree, and bacteremia due to Klebsiella oxytoca remains relatively uncommon. We herein describe two cases of septic shock caused by Klebsiella oxytoca.

A 56-year-old male, who attended our hospital for treatment of alcohol-induced chronic pancreatitis, was transferred to our emergency room because of complaints of diarrhea, back pain and general fatigue. On arrival to our hospital, he was conscious and alert. His blood pressure and heart rate were 78/53 mmHg and 150 beats per minute (bpm), respectively. Body temperature was 39.5ºC, and respiratory rate was 28/min. His abdomen was soft and flat; however, purpura was found in his periumbilical region. Initial laboratory studies revealed the following values; white blood cell (WBC) count, 5,600/μl; platelet count, 21.8×104/μl; C-reactive protein (CRP), 8.62 mg/dl; creatinine (Cr), 2.3 mg/dl; prothrombin time international ratio, 1.57; fibrin degradation products (FDP), 93.8 μg/ml; D-dimer, 49.2μg/dl; amylase, 5,050 IU/ml; creatine phosphokinase (CPK), 10,808 IU/ml; and endotoxin, 4,768.5 pg/ml. We concluded that the patient was in septic shock with disseminated intravascular coagulation (DIC) caused by acute exacerbation of chronic pancreatitis or of unknown origin. However, computed tomography (CT) performed on arrival showed that there was no change compared with previous images, and there was no lesion requiring surgical procedures. He was moved to the intensive care unit (ICU) and treated in conformity with surviving sepsis campaign guidelines (SSCG)2. Although sufficient quantities of intravenous fluids, vasopressor agents, antibiotics (3g/day of meropenem) and anti-DIC agents (gabexate mesylate and antithrombin III agent) were administered, his condition rapidly deteriorated and purpura extended through the whole body. Despite the introduction of mechanical ventilation and continuous hemodiafiltration (CHDF) for anuria, his condition became uncontrollable, and he died 22h following presentation.

The isolates from his blood later revealed Klebsiella oxytoca. An autopsy was performed. A postmortem examination showed the following: thrombi in many organs such as kidney, lung and small intestine, adrenal hemorrhage, and no evidence of acute pancreatitis and hepatobiliary infection. The pathologists’ diagnosis was DIC, Waterhouse-Friderichsen syndrome, and fulminant purpura; it was suggested that the cause was invasion of bacteria from the intestine, since other viscera were free from infection.

A 69 year-old male with a history of gastrectomy due to gastric cancer was admitted to a previous hospital due to adhesive ileus. An ileus tube was inserted for treatment of the ileus. His condition gradually improved and the ileus tube was removed on the eighth day after admission to the previous hospital. However, his body temperature suddenly increased to > 38ºC on the day following removal of the ileus tube. His body temperature then further increased to 40ºC and he became unconscious on the second day after removal of the ileus tube. He was then transferred to our hospital.

At presentation in our department, his level of consciousness improved (E4V4M6 on the Glasgow coma scale). His blood pressure and heart rate were 94/50 mmHg and 115 bpm, respectively, on administration of catecholamine (10 μg/kg/min dobutamine). Body temperature was 38.8ºC, and respiration rate was 28/min. His abdomen was soft and flat, and no tenderness was found in the abdomen. Initial laboratory studies revealed the following values; WBC count, 13,400/μl; platelet count, 8.0×104/μl; CRP, 10.34 mg/dl, Cr, 3.11 mg/dl; FDP, 42.8 μg/ml; D-dimer, 19.0 μg/dl; CPK, 6,179 IU/ml; and procalcitonin, 877.4 ng/ml. The CT scan showed only slight intestinal edema. We concluded that he was in septic shock with DIC of unknown origin, and intensive management in conformity with SSCG2 was undertaken in our ICU. We administered sufficient amounts of fluid and catecholamines such as dopamine and noradrenalin for maintenance of hemodynamics, antibiotics (meropenem and vancomycin) for the treatment of infection, and recombinant thrombomodulin alpha (rTM) for the treatment of DIC (Figure 1). Mechanical ventilation and CHDF were induced on the second day after admission to our hospital because he developed respiratory and renal dysfunction. In addition, his hemodynamics became too unstable for control by administration of fluid and catecholamine. Transesophageal echocardiography showed deterioration of left ventricular function with less than 20% ejection fraction (there were no findings of congestion). We therefore decided on the same day to introduce intra-aortic balloon pumping (IABP) and extra-corporeal membrane oxygenation (ECMO) to maintain his hemodynamics. Gradual improvement of hemodynamics occurred. ECMO was removed on the fourth day. On the fifth day, IABP was also removed. His condition improved, his tracheal tube was removed and he was transferred to the normal ward on the eighth day. Examination of his blood culture obtained on admission revealed the presence of Klebsiella oxytoca (Antibacterial agent was changed to cefotaxime based on these results). Finally, he was transferred to the previous hospital for rehabilitation on the twenty-eighth day. 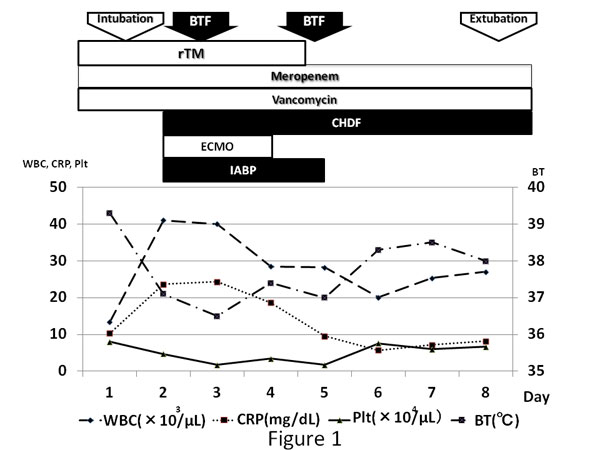 Figure 1:Treatment and course from the admission to 8th day. From the first day, meropenem (3g/day), vancomycin (2g/day), and rTM were started (rTM was finished on the 5th day). On the second day, he was intubated and mechanical ventilation was started. CHDF, IABP, and ECMO were also started. On both 3rd and 5th days, platelet and fresh frozen plasma were infused. On the 4th day, ECMO was removed. IABP was removed on the 5th day. On the 8th day, he was extubated and moved to the general ward.

Lin and co-workers4 reviewed 43 patients with an episode of Klebsiella oxytoca bacteremia, while Kim and colleagues1 studied 125 sporadic cases. Lin et al reported that Klebsiella oxytoca bacteremia was associated with a lower mortality rate (9%). On the other hand, Kim et al showed a mortality rate of 24%. In our study, one of two cases died. It is thought that differing antimicrobial susceptibility was responsible for the differences among these reports and that resistance to extended-spectrum cephalosporins could be a surrogate marker for severity of presenting illness in patients with Klebsiella oxytoca bacteremia1. In addition, Kim et al insisted that fatal outcome was strongly associated with septic shock, acute renal failure, polymicrobial bacteremia and presence of solid tumor1.

We tried to treat case 1 patient in conformity with SSCG2. However, his blood pressure could not be controlled with large amounts of fluid and catecholamines. Hori and colleagues reported a similar case with adrenal hemorrhage associated with Klebsiella oxytoca bacteremia5.

In case 2, ECMO was induced to maintain hemodynamics. ECMO is an effective tool for the management of hemodynamics in severe heart disease6 and cardiopulmonary arrest caused by deep hypothermia7. However, ECMO is not usually used for hypotension caused by septic shock8. Historically, sepsis was considered a contraindication to ECMO because of concerns that infecting organs would seed through the ECMO circuit. In addition, bleeding was concerned if DIC was complicated. SSCG does not recommend the introduction of ECMO for adult patients with sepsis2. However, we had no option but to introduce ECMO to rescue case 2 in that situation. In this case, because his recovery was slow, he underwent rehabilitation more than twenty-eight days. The reasons for this slow recovery might be exhaustion by septic shock and/or ECMO-related systemic inflammatory response syndrome9. Case 2 was complicated with DIC when ECMO was introduced. We administered recombinant thrombomodulin (rTM), which is a new agent for treatment of DIC10 and it was useful for safe driving of ECMO in the DIC situation.

In summary, we have reported two cases of septic shock caused by Klebsiella oxytoca. Septic shock caused by Klebsiella oxytoca is life-threatening and may be complicated with severe heart failure. It is concluded that ECMO is useful for maintenance of hemodynamics in such a situation and ECMO may safely be used with the administration of rTM even if the patient is complicated with DIC.