Background/aim: Respiratory syncytial virus (RSV) is one of the main causes of bronchiolitis and pneumonia in in-fants and young children. The aims of the present study were to evaluate the role of RSV in children >2 years old hos-pitalized with community-acquired pneumonia (CAP) and to type the circulating RSV strains.
Materials and Methods: Serum and throat swab samples were taken upon admission from Greek children aged > 2 years, hospitalized with atypical CAP, and when possible, a second serum sample was also taken. RSV IgG and IgM antibodies were determined by Enzyme Linked Immunosorbent Assay (ELISA), while throat swab samples were test-ed by nested RT-PCR. Additional serological testing was performed to find out probable co-infections.
Results: A total of 101 children with atypical CAP were included in the study, aged 2.5-14 years (median 8.25). RSV IgM antibodies were detected in 21 (20.7%) cases, either in the first or/and in the second serum sample, while RSV genome was detected in 11 out of 15 (73%) IgM-positive patients, which were further tested by PCR. PCR-positive results were obtained up to the 7th day of illness. Among the 11 cases, one was of type B, and all the rest were of type A. The median age of the RSV-positive children was 4 years (range 3-13 years). Although RSV was detected in all seasons, the majority of cases (31%) were detected in winter. Co-infection was detected in 3 cases (two with Myco-plasma pneumoniae and one with adenovirus).
Conclusions: Apart from the known role of RSV as the most important pathogen causing acute respiratory disease in infants and young children, it is also a significant viral pathogen in older children hospitalized because of CAP. Genet-ic typing provides further insight into the epidemiology of the disease.

Community-acquired pneumonia (CAP) is a common respiratory illness among patients of all ages. Especially among children, CAP is a significant cause for morbidity, and it is caused mainly by viral pathogens, often by more than one, since co-infections occur in approximately 30% of cases1. Although the knowledge on the prevalence of viral infections in children with CAP is limited, respiratory syncytial virus (RSV) is usually the most frequently detected virus followed by rhinoviruses and human bocavirus1,2. In general, RSV is well recognized as the most important pathogen causing acute respiratory disease in infants and young children, mainly in the form of bronchiolitis and pneumonia3.

Two antigenic RSV subtypes (A and B) are known, with low-scale cross protection4. It is unclear why some children experience severe RSV disease and others develop milder disease. It may be due to host factors, maternal immunity, or differences in the virus itself. Genotypes show complex circulation patterns probably facilitated by herd immunity to certain genotypes which might influence disease severity5.

Given the development of large-throughput screening techniques and improvement of clinical data management, there is increasing potential for studies to identify the cause of the disease to inform diagnostic and therapeutic decision making6. In addition, the new diagnostic techniques are used to evaluate the epidemiology of respiratory tract infections utilizing specimens obtained prospectively1 and/or retrospectively7. In a recent study carried in children (<14 years) with CAP, RSV was the most frequently detected virus1. The aims of the present study were to investigate the role of RSV in Greek children older than 2 years hospitalized with CAP, to determine the type of the virus strain and to find out any relation with the severity of the disease.

During a 13-month period (May 2003 to May 2004) serum and throat swab samples were collected prospectively from Greek children older than 2 years, hospitalized with CAP in the Fourth Department of Paediatrics, in the University General Hospital AHEPA in Thessaloniki (Northern Greece). The present study included only children with symptoms, signs and/or chest radiography findings consistent with atypical pneumonia. In atypical pneumonia, X-ray showed hilar adenopathy and unilateral or bilateral infiltrates, and/or patient looking worse than the symptoms suggest, and/or not showing response to treatment with b-lactam antibiotics8-10. Patients were excluded from the study when there was evidence of bacterial infection or chronic respiratory illness, and those with other underlying diseases that might predispose patients to pneumonia.

On patient’s admission, pediatricians were completing a questionnaire regarding the age of the patient, the date of onset of the disease, the clinical symptoms (malaise, fever ≥ 38◦C, tachypnea, cough, sputum production, abdominal complains), the laboratory findings, and the potential presence of underlying disease. Diagnosis of pneumonia was based on the presence of new infiltrates on chest radiography (single or multiple infiltrates, opacities or consolidations), symptoms (like chills and chest pain), and physical examination findings (rales or crackles, wheezes on auscultation of bronchial breathing)9. All children included in the study were hospitalized for at least 2 days.

A serum and a throat swab specimens were taken upon patient’s admission, while a second serum sample was taken 9 -24 days after onset of the illness (when possible). The throat swab specimen (viscose swab) was placed in 2 ml of transport medium11. All specimens were stored at -20◦C. The serial serum samples were serologically tested at the same run.

The study protocol was approved by the Ethics Committee of the hospital, while informed parental consent was obtained for each patient.

Serum RSV IgG and IgM antibodies were determined using ELISA (Virion/Serion, Germany), following the manufacturer’s instructions. Serologic diagnosis of infection was established when IgM was above the cut off value, or a fourfold increase in the IgG antibody titers in paired serum specimens was observed.

Molecular methods were applied on throat swab specimens from the RSV IgM-positive and few RSV IgM-negative patients for whom an acute throat swab sample was available. RNA was extracted by a boiling method according to Waring et al.11, and a nested RT-PCR, which amplifies a partial fragment of the RSV fusion protein was performed12. PCR products were detected by 1.5% agarose gel electrophoresis with ethidium bromide staining.

For each patient white blood cells (WBC) count was measured in an automated cell counter and the erythrocyte sedimentation rate (ESR) was measured in a period of one hour; C-reactive protein (CRP) was estimated by nephelometry (Image Beckmann). ESR <10 mm/hour and CRP < 0.5 mg/dl were considered at normal levels, while normal WBC range in the various age groups was considered according to Camitta13.

The present study included 101 children older than 2 years (2.5-14 years, median 8.25) hospitalized with CAP. RSV IgM antibodies were detected in 21 (20.7%) children, with 3 of them presenting also a fourfold increase in the RSV IgG antibodies in the two serial serum samples.

Among the 21 patients with RSV infection, 9 were males and 12 females (p=0.129). The median age of the children with and without RSV infection was 4 and 5 years, respectively. The frequency of RSV infection among children 2-5 years (21%) did not differ from that among children 6-14 years (20.5%) (p=0.941). Figure 1 shows the seasonal distribution of RSVinfection in children during one year. Cases were detected during all seasons of the year; although they were more frequent during winter (31%), the seasonal differences were not statistically significant. 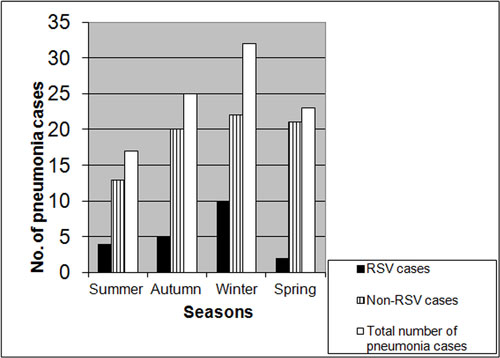 Figure 1: Seasonal distribution of RSV infection in children during one year.

In the present study, 21 among 101 (20.7%) Greek children older than 2 years hospitalized because of CAP, were diagnosed with RSV infection. Similar results (17%) were reported in a previous study in which the diagnosis was also based on serology14. A higher rate (52.7%) was reported in another study in which real-time PCR was used; however in that study the children were less than 5 years old and they were hospitalized with various respiratory tract infections (not only CAP)15.

In temperate climate, RSV activity increases in the winter months16. In the present study most (31%) of the RSV infections were observed during winter. In a recent study carried in Korea during 2003-2008, RSV infection was detected predominantly in the fall and winter17. Kim et al17 diagnosed RSV infection in 25.5% of children (1 month to 12.5 years) hospitalized with acute respiratory tract infection. However, in that study the mean age of patients was 15 months (SD=27) with predominance in infants less than 1 year. The children of present study were older than 2 years, and there was no significant difference in the RSV infection rates between the two age groups studied (2-5 and 6-14 years; 21.1% and 20.5 %, respectively, p= 0.941).

Variations in RSV detection rates and the predominant types are not unexpected, due to differences in inclusion criteria, applied diagnostic methods, and probable community outbreaks during the study period. Inter-country differences are also expected due to the diversity of the climatic conditions and the human activities. RSV genotyping has never been performed previously in Northern Greece, thus, the present study can serve as threshold for future studies. It was found that RSV type A and B co-circulated in 2003, with clear predominance of type A, while in 2004 only type A was detected. In a study in UK during 1995–96, RSV type A and B co-circulated, after which RSV B was not detected; in 1996–97 and 1997–98, RSV types A and B co-circulated, and in each of the three winters, RSV type A was the predominant circulating type18. It seems that there are continuous changes in the predominant RSV subtypes. Such data and continuous monitoring of the circulating RSV strains provide important information for the epidemiology of the disease and for vaccine development.

The present study shows the limitation of the clinical and laboratory findings for the diagnosis of RSV infection in CAP cases19,20. The presence of high fever and cough in 95% of our cases and the increased ESR and CRP in 90% of the patients are suggestive of severe form of the disease. Since only one of the cases was caused by RSV type B, any relation with the severity of the disease was not possible. However, a previous study in Greece showed that RSV-A-induced bronchiolitis was more severe than RSV-B-induced one, in agreement with the majority of previously published studies21.

During the study period, M. pneumoniae was the most often (22%) detected pathogen, followed by RSV (21%). Woodhead et al22 reported that Chlamydia pneumoniae was the most frequent (17%) causative pathogen of CAP in Europe. RSV co-infection was detected in 3 cases (two with M. pneumoniae and one with adenovirus). RSV in mixed infections has been often reported in previous studies6,23. The detection of mixed infections is important for the proper treatment of the patients. In a recent study in Greece it was shown that viral co-infections were associated with increased probability for hospitalization24.

In conclusion, RSV was detected in 20.7% of pediatric CAP patients older than 2 years, suggesting that its role in older children has not to be underestimated. Concerning RSV subtyping, type A predominated during the study period; further studies are needed to get a better insight into the circulation patterns of the RSV types and find out their probable relation with disease severity.

Dr Motasem Almasri was supported by a grant from the State Scholarships Foundation (IKY), Greece.