Background:Pulmonary hamartomas are rare benign tumors of the lung with an incidence of 0.025%-0.32%. Endobronchial benign lesions can cause bronchial obstruction and recurrent respiratory infections or obstructive pneumonia and recurrent hemopthysis.

Case report: A 66-year-old male with recurrent hemoptysis and pneumonias for a year, was referred to our department for an endoscopic resection of an endobronchial hamartoma. Initially he refused any intervention but, as he suffered additional episodes of hemoptysis and chest infections during a year on follow up, he finally underwent interventional bronchoscopy and the lesion was cauterized using snare electrocautery probe and removed with cryoextraction. The patient has been followed for two years in our outpatient clinic, with no further problems.

Conclusion: Endoscopic treatment with flexible bronchoscope, electrocautery and cryotherapy provides an excellent outcome. Surgical therapy, should be reserved for the hamartomas that cannot be approached through endoscopy.

Benign lung tumors represent less than 1%, and among these, hamartomas, with an incidence between 0,025%-0,32%, are the most common¹. In the largest published series of pulmonary hamartomas, Gjevre et al analyzed 215 cases of hamartoma, of which only 1.4% were located endobronchially². The majority of patients were, at presentation, between the sixth and seventh decades of age, as has been found in previous series, with male predominance³.

A 66-year- old male with recurrent hemoptysis and pneumonias for the last year, was referred to us for an endoscopic resection of an endobronchial hamartoma (EH). His past medical history included chronic obstructive lung disease (COPD) and coronary artery disease. Chest computed tomography (CT) scan showed loss of the volume of the middle lobe and a polypoid density mass of few millimetres in the right middle lobe bronchus (Figure 1). A polypoid, fragile, endobronchial lesion obstructing middle lobe bronchus was detected on fiberoptic bronchoscopy (Figure 2). At that time the patient refused any further diagnostic or therapeutic intervention. During a year on follow up, the patient suffered two additional episodes of hemoptysis and chest infections and he was offered an interventional bronchoscopy. During the bronchoscopy the lesion was cauterized with 20 Watt Argon Plasma Coagulation (ERBOTOM ICC 200 APC, Erbe, Germany) and removed with cryoextraction. A rigid APC probe, 2.3 mm in diameter and 50 cm length, was used. On re-evaluation immediately after the endobronchial therapy, the middle lobe bronchus was found to be entirely patent (Figure 3). The post intervention period was uneventful and the patient was discharged after two days. Histopathological examination showed the excised speciment to be an endobronchial hamartoma (Figure 4). The patient has been followed, with chest X-ray and pulmonary function tests, in our outpatient clinic for two years, with no further problems. 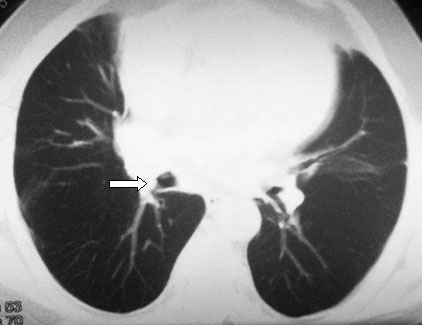 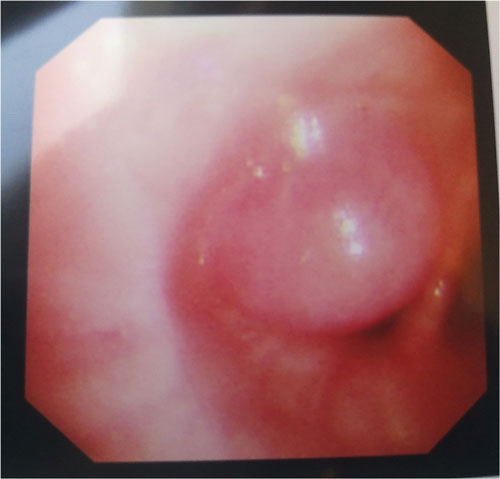 Figure 2: Visualization by fiberoptic bronchoscope of the polypoid endobronchial lesion obstructing the middle lobe bronchus, before the endobronchial therapy with Argon Plasma Coagulator and cryoextraction. 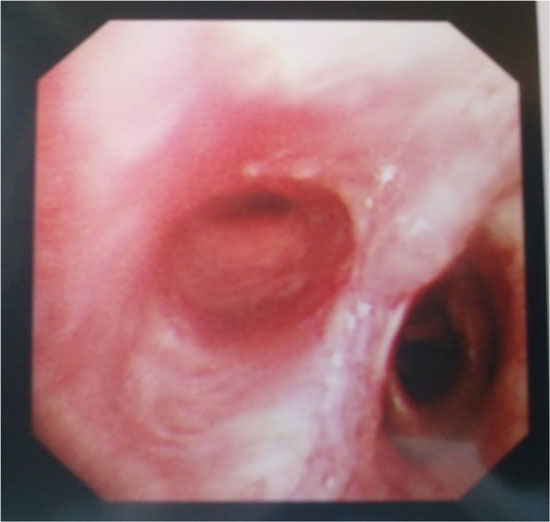 Figure 3: Re-evaluation by fiberoptic bronchoscope after the endobronchial therapy with Argon Plasma Coagulator and cryoextraction. Note the recanalization of the lumen of the middle lobe bronchus. 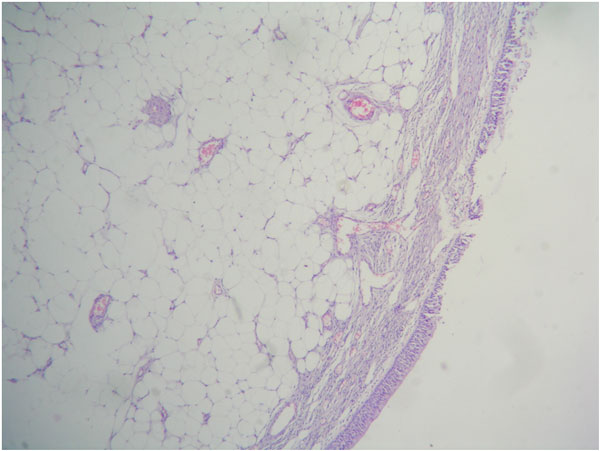 Endobronchial hamartomas have been succesfully removed both endoscopically and surgically. Endobronchial laser resection has an important role, especially in patients who either refuse to have an operation or are not good surgical candidates. Another effective and easily performed technique is cryotherapy5-6. Surgical therapy, by bronchotomy or resection, should be reserved only for cases where the hamartomas cannot be approached through endoscopy.

We herein reported a succesfully treated endobronchial hamartoma by resection using a snare electrocautery probe and cryoablation. Surgical therapy, by bronchotomy or resection, should be reserved only for cases where the hamartomas cannot be approached through endoscopy7.

In conclusion, endobronchial hamartomas are benign neoplasms of the tracheobronchial tree that potentially can cause morbidity due to bleeding or bronchial obstruction and recurrent pneumonias. Endoscopic treatment with flexible bronchoscope, electrocautery and cryotherapy provides an excellent outcome in those patients.