The evaluation of balance in children with cerebral palsy (CP) is an extremely difficult and complex procedure. The purpose of the present study was the evaluation of three balance tests: Berg Balance Scale (BBS), time up and go (TUG) and Bruininks-Oseretsky Test of Motor Proficiency (BOTMP) and their reliability in children with CP. The control of the reliability of the tests was based on the successive application to twenty children with CP within a short period in order to substantiate their ability to give the same results in a stable sample. No difference was found according to scores between the measures but important statistical differences were found of the scores of the children in all tests. The tests BBS, TUG and BOTMP are considered to be reliable and valid tests, able to objectively define the quantitative mutation of the balance of the child in test with CP.

For the objective balance assessment in children with locomotion impairments and the change of their movement pattern which is observed following an intervention, a definition of the most reliable and valid functional tests of balance control for the specific population of cerebral palsy is necessary.

From the total functional tests which have been planned up to this day most of these tests don’t fulfil the necessary criteria of reliability and validity1. However, Berg Balance Scale (BBS)2, the balance unit (Balance Sub-Scale) of Bruininks-Oseretsky Test of Motor Proficiency (BOTMP)3 and Timed Up and Go (TUG)4 constitute the most frequently applied control tests of the quantitative changes of balance.

Nevertheless, the reliability of BBS in children with or without locomotion impairments or other health problems hasn’t been controlled.

In the present study, three balance tests were applied in children with cerebral palsy, to evaluate their reliability in the assessment of balance in these subjects.

Twenty children (12 boys and 8 girls) aged 6-14 years, with cerebral palsy from 4 Special Education Schools in Greece (Thessaloniki, Lamia, Giannitsa and Aridaia) participated in this study. An inclusion criterion for the participation was the diagnosis of hemiplegia or diplegia with a capability of self-supported walking. A clinical equivalence of right or left hemiplegia was presented in 12, while 8 children had an image of diplegia. We certify that the study followed the principles in the Declaration of Helsinki.

For the data collection, the following measuring instruments were used:

1. Berg Balance Scale (BBS)2. This test includes fourteen (14) tests which correspond to daily activities of the child, as getting up from a seat, keeping of a standing position without a support, moving from a standing to a sitting position, moving in a room, etc. Every test is rated from 0 (performance incapacity) and reach to 4 (full capacity). Then, the grades of all partial tests are added and the total performance (score) of the child in the test is calculated.

2. Balance unit of Bruininks-Oseretsky Test of Motor Proficiency (BOTMP)3. This unit includes the execution of tests of static and dynamic balance, as balance on the main foot at the ground and on a low balance beam, regular walking on a line of ground and in low balance beam, etc. The total grade is calculated until the sum of the partial grades of unit tests which also constitute the total performance (score) of the child.

3. Timed Up and Go (TUG)4. In the specific test, the child owes to stand up from a chair, walk along a line, turn at 180ο in the end of line and return to sit again on the chair. The test performance is the time that is required for the completion of test.

The measurements were conducted in the familiar physiotherapist’s room or school environment of each child, within a period of two days, with the written agreed opinion of their parents. During the first measurement (Measurement 1), the three tests of balance evaluation (BBS, BOTMP, & TUG) were applied twice in each child, with an a random order. The first time (Time 1) every child made one effort in each test, with an interval of 3 minutes. Since all the tests were completed, the child repeated them once more (Time 2) after an interval of 5 minutes.

For the control reliability of BBS, TUG and BOTMP tests, the intra-class correlation coefficient (ICC) of performances of each test in different measurements was calculated. Given that the children were measured three times in each test, four different ICC coefficients were calculated for each test. Every ICC was calculated, through a model of fluctuation analysis with two factors (two-way ANOVA). The following were also calculated: a) the standard error of measurement (SEM), b) the coefficient of variation (CV) and c) the limits of agreement (LOA) of the values in the two measurements. For all analyses, the level of importance was appointed to p<0.05.

The results of research are presented for each one of the three tests (BBS, TUG and BOΤMP).

Figure 1 depicts scores during BBS test in the three different measurements (Time 1, 2, 3). As it is obvious, there is a stability of performances from one measurement to the other. The latter is also proved by the low coefficient of variation among all the combinations of the three measurements (Table 1). In addition, indexes of reliability (SE and LOA) of BBS test among all combined measurements were particularly high. It was also found out from the results that the values of the intra-class correlation coefficients (ICC) between the 1st-2nd,1st-3rd and 2nd-3rd measurements were ICC1,2=1.000, ICC1,3=0.999, and ICC2,3=0.999, respectively (p<0.001) and among the three measurements (1st, 2nd and 3rd) ICC1,2,3=0.999 (p<0.001). The above values were considered as maximum during the control of test reliability. 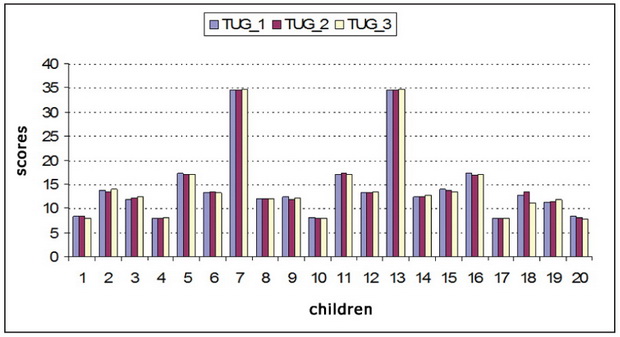 Figure 3 presents the average score of children from the two efforts in BOTMP test, in the three different measurements (Time 1, 2, 3). There is a stability of performances from one measurement to another, also proved by the low coefficient of variation among all combinations of the three measurements (Table 3). In addition, as it is shown in Table 3, the indexes of reliability (SEΜ και LOA) of BOTMP test among all the combined measurements were particularly high. Intra-class correlation coefficients (ICC) between the 1st-2nd, 1st-3rd and 2nd-3rd measurements were ICC1,2=0.978, ICC1,3=0.993 and ICC2,3=0.989, respectively (p<.001) and among the three measurements (1st, 2nd and 3rd) ICC1,2,3=0.987 (p<.001). The above values were considered as maximum during the control of test reliability. 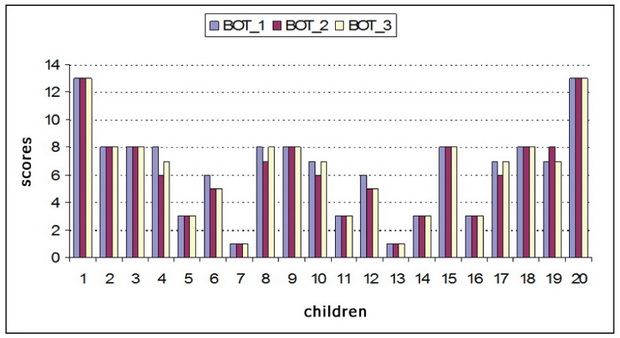 The results from this study suggest that the three tests are absolutely reliable for children with cerebral palsy. However, comparatively to BBS and TUG test, the BOTMP test was found slightly inferior in reliability.

The great stability of scores (p<0.001), in the same examined child, after the passage of a week, which is actually a short period of time to establish an objective change of his locomotive condition, substantiates the competence of tests to give steadily the same result in a patient with unchangeable movement condition (test–retest reliability).

Regarding BOTMP by studying the reliability of the balance unit of BOTMP in 20 children without health problems, considered that only two from the eight tests of balance unit of BOTMP can be regarded as reliable (the monopedal support in floor with the main foot and the walking forward on a line). This statement agrees with the results of this research that BOTMP is inferior in reliability in comparison with the two other tests. This could lie in the fact that BOTMP serves mainly the discrimination from pathological to normal (discriminative index) and not the quantitative estimation of a movement condition or its change following a treatment (intervention)6,9. Due to the limited age range of the children that participated in research (6-14 years old), results can’t be generalized in children of younger or older age.

No benefits in any form have been received or will be received from a commercial party related directly or indirectly to the subject of this article.