Skip to content
hippokratia.gr > Volume 18 (2014) - Issue 4 > Radiologic and pathologic features of a primary chloroma of the testis: a case report and brief review of the literature

Aim: To describe a case of primary granulocytic sarcoma.

Case description: A 43-year-old man presented with a painless testicular swelling. There was no previous history of malignancy or hematologic disease. Ultrasound and magnetic resonance imaging examination showed an intratesticular mass extending to the surrounding scrotal tissues including the epididymis. Inguinal radical orchiectomy was followed by a macroscopic and microscopic evaluation of the tumor. Immunohistochemistry demonstrated the strong positivity of the neoplastic cells for leucocyte common antigen (LCA), myeloperoxidase, CD-34 and CD-117. All imaging and laboratory tests for metastatic or hematologic disease, including a bone marrow biopsy, were negative, leading to the diagnosis of a primary granulocytic sarcoma of the testis.

Conclusion: Although chloromas usually manifest in patients with a hematologic malignancy, isolated cases may occur. The low specificity of imaging and, occasionally, microscopic examination is challenging for the right diagnosis. The role of immunohistochemistry in conjunction with the clinical, imaging and laboratory findings is crucial to reach the correct diagnosis.

Granulocytic sarcomas (GS) or chloromas are extramedullary myeloid cell tumors, presenting as single or multiple masses1, composed of immature and mature cells of the myeloid granulocytic series. They affect both sexes equally1, children more commonly than adults and 60% of the patients are younger than 15 years old2.

Chloromas may involve any anatomical site with a predilection to soft tissue, periosteum, bone, orbit, skin and lymph nodes. They are ordinarily associated with a hematologic disease, most commonly acute myeloid leukemia (AML)3. Rarely, chloromas may appear as isolated entities in patients with no previous history of leukemia or similar disorders, as it was in the reported patient’s case. While GS occurring as a focal testicular mass is unusual, microscopic infiltration of the testis in AML is very common4. Testicular involvement in GS is usually unilateral, but simultaneous or asynchronous5 involvement of both testicles is possible6.

Although, in some cases a chloroma can be a localised process6, its occurrence in association with a hematologic disease, its recurrence and occasional progression imply that it should be approached as a systemic disease.

A 43-year-old man presented with a painless right testicular swelling. On palpation the testis was hard and swollen. The patient had no previous history of malignancy or hematologic diseases.

Ultrasonographic examination revealed a hypoechoic, almost homogeneous mass, with relatively well-defined borders occupying most of the testis (Figure 1). The mass was partially surrounded by a hypoechoic halo that was incompletely encircled by lines of mixed echogenicity. Lines of echogenicity matching that of the halo extended radially all-through the lesion (Figure 1a,b). A small region with ill-defined borders and increased echogenicity similar to that of the normal testicular parenchyma was detected within the lesion (Figure 1c). The tumor extended locally through the tunica albuginea to the epididymis, the spermatic cord and the surrounding soft tissue forming a hypoechoic extratesticular mass. The epididymis appeared also diffusely hypoechoic (Figure 1d). 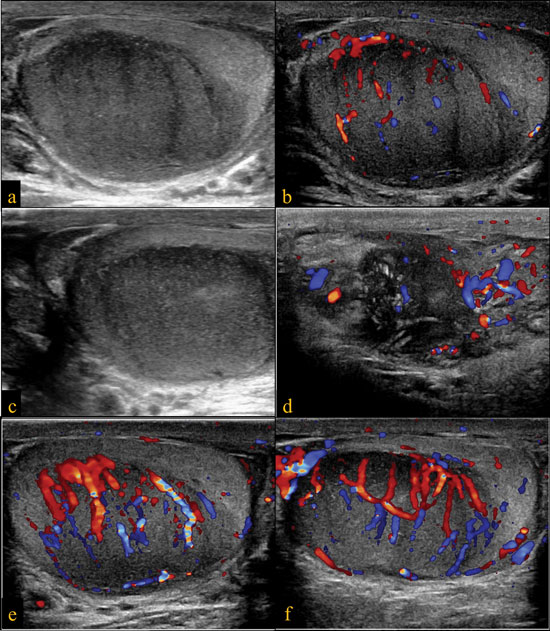 Figure 1: Sagittal B-mode (a) and color Doppler (b) sonograms showing the hypoechoic, relative homogeneous intratesticular mass. Linear hypoechoic bands are discerned within the tumor. A small, ill-defined area of increased echogenicity similar to that of the normal testicular parenchyma is seen (c). Sagittal color-Doppler (d) sonogram showing the extension of the tumor outside the testis and the infiltration of the fat tissue, the spermatic cord and the epididymis. There is not increased vascularity of the infiltrated structures outside the testis. Sagittal color-Doppler sonogram displaying the tumor vessels being arranged in a palisading or basket pattern (e) or in a criss-cross fashion (f).

On real-time elastography, the intratesticular lesion presented no strain and its mean strain ratio of 5.80 strongly indicated malignancy (Figure 2). 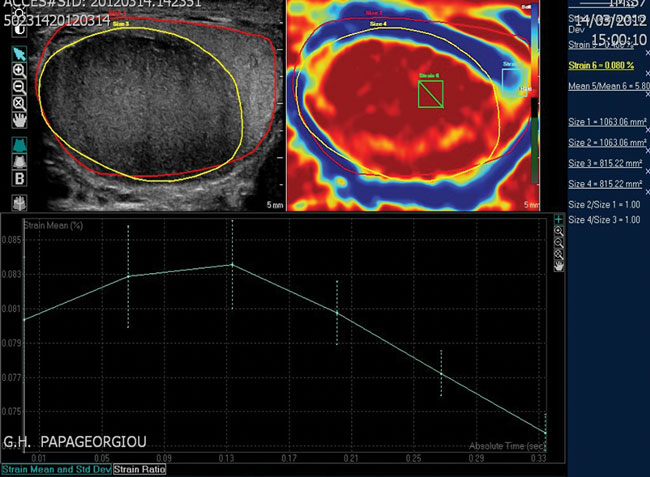 Figure 2: Sonoelastography demonstrates the stiffness of the tumor. The mean strain ratio of the lesion is 5.8 indicating malignancy. 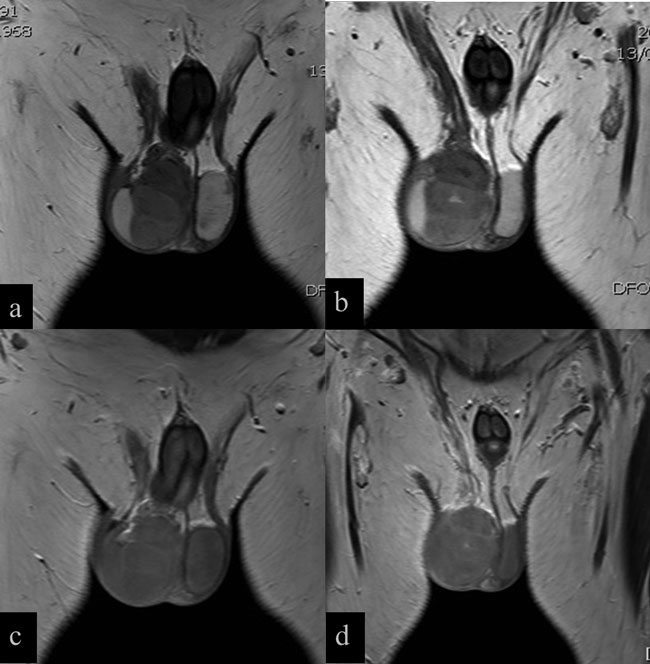 Figure 3: T2WI coronal images showing the low signal intensity of the lesion and the septa within the tumor mass (a,b). A small area of signal intensity similar to that of the normal testicular parenchyma is discernible (b). Post contrast T1WI coronal images (c,d) show the mild homogeneous enhancement of the tumor mass and the greater enhancement of the septa.

The levels of alpha-fetoprotein (AFP), human chorionic gonadotrophin (hCG), lactate dehydrogenase (LDH), and placental alkaline phosphatase (PLAP) were all within the normal limits. Computerized tomography of the abdomen and chest were negative for retroperitoneal lymph node enlargement or metastatic disease.

Radical orchiectomy of the right testis was performed without complications. Gross examination of the specimen revealed a solid, white testicular tumor, with an average diameter of 6 cm and hemorrhagic elements at the periphery of the mass (Figure 4a). Histopathologic evaluation showed diffuse infiltration of the testis by a malignant tumor. The neoplasm was composed of medium-sized and large cells with ill-defined borders, scant and weakly colored cytoplasm and inconspicuous nucleoli (Figure 4b). The malignant cells displayed diffuse growth and infiltrated the epididymis, spermatic cord and the surrounding fat.

The peripheral blood studies of the white blood cell count and platelet count were normal. The result of the cytologic examination of the bone marrow aspiration included normal erythroid series, adequate megakaryocytes and sufficient maturation of the myeloid series. Biopsy established the normocellularity of the bone marrow.

Within one year follow up period, all imaging and laboratory examinations were normal.

Chloroma usually occurs as a secondary manifestation, either before or simultaneously with AML1. Less frequently, it may appear after complete hematologic remission6, which strongly indicates bone marrow or other extramedullary relapse6. It is also encountered as a primary chloroma and precede AML by months or years2,7,8, or it can be an independent entity, without progression to a hematologic disease9-13. The development of a granulocytic sarcoma in the setting of a chronic myeloproliferative disorder or a myelodysplastic syndrome signifies a blast crisis and is associated with disease progression and a poor prognosis2. Chloroma may also appear as a relapse in patients with a history of chronic myeloid leukemia (CML) after allogeneic peripheral blood stem cell transplantation and subsequent complete hematologic remission14. GS affects 2.5-9.1% of the patients with AML2 and 4.5% of those with CML15. Lymph node metastases have been described in cases of primary granulocytic sarcomas that later progressed to AML6,7.

Ultrasonography represents the first diagnostic method implemented in individuals with testicular enlargement. Gray-scale and mainly, color-Doppler sonography may easily help distinguish the intra- or extratesticular location of the lesion, and can also indicate its neoplastic or non-neoplastic nature by determining its individual characteristics4.

On gray-scale ultrasonograpy, chloromas appear hypoechoic and relatively homogeneous9, although a heterogeneous pattern has also been described, reducing the specificity of these ultrasonographic findings14. A smooth low echogenicity resembles that of seminomas and lymphomas. Chloromas may have ‘septations’, which appear as hypoechoic lines radially extending inside the tumor. Testicular seminomas may also present with septations, usually hyperechoic.

Local invasion of the epididymis, the spermatic cord and the surrounding fat tissue, as seen in our case, is more commonly found with lymphoma6. Increased vascularity, with vessels arranged in a palisading or ‘basket’ pattern has already been described for testicular chloroma9, but it may be seen in testicular lymphoma, too14.

Based on hematoxylin-eosin-staining GS are divided into i) well-differentiated tumors, with numerous eosinophilic myelocytes17, ii) poorly-differentiated GS, with eosinophilic myelocytes only occasionally seen17, and iii) blastic tumors composed mainly of myeloblasts17. It should be stated that this distinction refers only to the morphologic variability of the myeloid blast infiltrate.

Expression of LCA in combination with B-cell-specific [CD20] and T-cell-specific [CD3] antigens negativity should favor the suspicion of a GS over a lymphoma14,17. Myeloperoxidase is considered a sensitive, specific antibody for the detection of mature and immature myeloid cells17, but CD68 is more sensitive in demonstrating myeloid differentiation17. Lysozyme and CD117 are markers for extramedullary myeloid cells14, and CD34 is seen in leukemic cells of both lymphoid and myeloid origin, but it is not expressed in lymphomas17.

Isolated chloromas, especially those with no evidence of differentiation on conventional microscopy, are very difficult to diagnose and are usually labelled as malignant lymphomas. The differential diagnosis of chloromas on the basis of histopathologic findings includes lymphomas, seminomas, poorly differentiated carcinomas or infectious processes14. Considering that the imaging and histopathologic findings are not specific for this tumor and have been described in other testicular tumors, the use of immunohistochemistry is obligatory to reach the correct diagnosis.

Generally, primary granulocytic sarcomas are treated with systemic chemotherapy as if these patients already have AML18,19. On the other hand, there is still controversy on whether a primary chloroma will eventually progress to AML or not, affecting therapeutic approach. There are cases of isolated testicular chloroma treated only with inguinal orchiectomy and regular follow-up examination9.

There is no conflict of interest to be stated. No funding was received for this research.