Background: Purple urine bag syndrome is an uncommon phenomenon where the plastic urinary catheter bag and tubing turn purple. It occurs in some elderly constipated chronic urinary catheterization patients. The phenomenon is attributed to the presence of metabolites of tryptophan in the presence of urinary tract infection. This urine discoloration may lead to misdiagnosis and also cause great concern to patients and their relatives.
Case report: We present the clinical case of a 83-year-old female patient with dementia and hypothyroidism, chronically catheterized, who presented with purple-color urine initially misdiagnosed as having haematuria.

Purple urine bag syndrome (PUBS) is a rare manifestation of urinary tract infection (UTI) where the plastic urinary catheter bag and tubing turn purple1. This unique condition may cause great anxiety to patients and false visas and conducting unnecessary tests by primary health care providers or non-skilled medical personnel.We present a case report of this uncommon phenomenon and review the literature.

A 83-year-old woman was admitted to our clinic because of reported haematuria in the last 24 hours and attendant fever in the last eight hours. Her past medical history included hypothyroidism, Alzheimer disease, and colon cancer treated twenty years ago. She was bedridden and had bladder tube for more than three years. Physical examination revealed fever 38.5oC, BP: 125/92 mmHg, HR: 100 bp/min, sO2: 95 %, mild confusion without neurologic deficit, normal breath sounds, and dry skin. The urine had striking purple discoloration although the patient had not received drug or food that could affect urine color (Figure 1). Laboratory findings were leucocytosis of 13 × 103/ml, neutrophils of 84%, serum haemoglobin of 14.6 g/dl, platelet count of 185 x 103/ml, LDH of 530 U/l [normal range (NR) 90-250], SGOT/SGPT/ALP were within NR, serum Total bilirubin of 0.5 mg/dl (NR: <1 mg/dl), serum urea of 79.5 mg/dl (NR: 10-50), serum creatinine of 1.35 mg/dl (NR: 0.5-1.2), serum albumin of 2.53 mg/dl (NR: 3.8-4.4), erythrocyte sedimentation rate of 57 mm/h and CRP of 4 mg/dl (NR: 0-1). The radiograph was normal. Urinalysis shows red blood cells: 0-1, pyuria (80-100 wbc per high power field), a pH of 8, and nitrite: 2+. From urine culture was isolated Escherichia coli greater than 105/ml and UTI was confirmed.Empirical therapy with intravenous amoxicillin/clavulanic acid 1000/200 mg twice daily was initiated, which was consistent with the later culture antibiotics sensitivity pattern, and also fluid therapy. The urine bag was changed by admission but discolor was still present for a couple days. Three days later she was afebrile while urine color and the kidney function were normal. There was no complication and the patient was discharged four days after hospitalization. 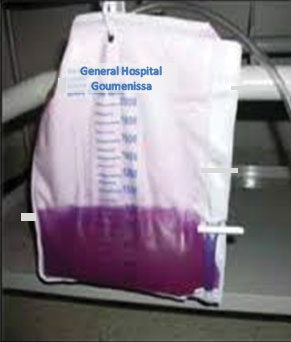 Figure 1. Purple discoloration of urine of patient at admission.

PUBS was first described in 19782. Although referred as syndrome actually is an uncommon phenomenon of urine discoloration mostly due to UTI in chronically catheterization patients, especially elderly women.

Generally PUBS is considered extremely rare, although recent studies reported a relatively high prevalence of PUBS which varies from 8-16% in patients with long-term urinary catheterization1,3,4. Especially, in female nursing home residents with dementia and urinary catheterization, PUBS may be developed even in 27%5. The causative factors of PUBS include female gender, old age, bedridden, constipation, urinary tract infection, chronic urinary catheterization, alkaline urine, and plastic (PVC) catheters and bags3,6. Also, dehydration, advanced chronic kidney disease and azotemia have been reported as risk factors7. A duration of more than one year of catheterization is usually needed for the appearance of discoloration3,6.

The most common view considers that PUBS has been attributed to the metabolism of tryptophan in the presence of UTI infection. The pathophysiology of this syndrome has been well described8. It is important to know that the purple color results from interaction of pigments with the plastic bag or catheter rather the discoloration of urine itself. Also, it has been confirmed that a higher bacterial load in the urine is an important factor involved in development of PUBS6. Bacterial species that have been associated with PUBS include Pseudomonas aeruginosa, Proteus mirabilis, Klebsiella pneumoniae, Morganella morganii, Escherichia coli, Providencia species, Enterococcus species, etc9. However, because not all bacteria -even of the same species- produce these enzymes PUBS is a rare phenomenon, although UTI are very common. On the other hand, although the role of alkaline urine is considered important, PUBS has also been observed in patients with acidic urine6,10. Besides that, chronic constipation may induce bacterial overgrowth and thus increased metabolism of tryptophan into indole.

Our patient was very old, had dementia, was bedridden, and had chronically catheterization, found dehydrated, with pre-renal failure and chronic constipation, as a typical case of PUBS. In fact, in most cases, multiple risk factors are present and act synergistically to the occurrence of PUBS. In particularly, dehydration plays an important role because serum concentration of pigments is increased. While on constipation bacteria flora have more time to act on the intestinal contents.

As to the differential diagnosis, it has been reported a relatively large number of causes that lead to change of urine color11. Fortunately, in the case of PUBS there is no need of full investigation. Of course, should be made the recognition of purple discoloration unlike to dark black or red urine that usually are associated with other diseases. First of all, the health care provider should perform a full physical examination of patient with purple urine color which may include a rectal or pelvic exam. Also, the patient should be asked about the pattern of time of this change of urine color (suddenly or not, or after of sun/air exposition of urine), and about symptoms that accompany such as urinary urgency, frequent urination, burning pain with urination (suggesting infection or tumor), colicky pains (suggesting stones), odor of ammonia of urine (suggesting infection) as well as any food ingested by the patient as the red beans or treatment with the chemotherapeutic mitoxantrone which both can change the color of the urine into purple. Furthermore, any prescription medications, or diagnostic dyes recently ingested. Figure 2 shows the common causes of red, pink and dark colored urines. 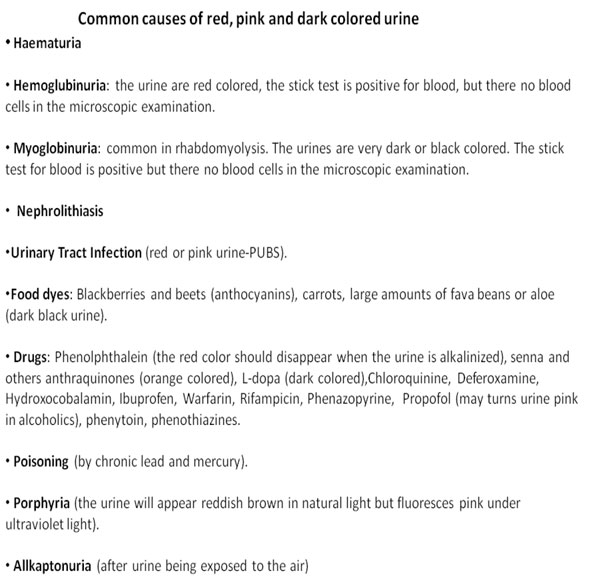 Generally, at present, there is no specific recommended approach for diagnosing PUBS other than visual identification of the purple urine in bag and tubing and to performed simple microbiology (urinalysis, urine culture) and biochemistry tests1. Besides, most of cases are asymptomatic. It has been suggested that finding of responsible pigment by spectroscopic analysis of patients’ urine confirms the diagnosis but obviously is not a handy method used in every day clinical practice1. Our diagnosis of PUBS based on the confirmation of UTI.

As to the treatment, PUBS considered a benign process, so aggressive antibiotic treatment is a point of debate. However, PUBS is associated generally with higher incidence of morbidity and mortality than UTI alone without this occurrence. Lin et al. proposed that treatment of underlying UTI with an antibiotic, such as ciprofloxacin, is sometimes helpful9. Our patient received from the beginning empirical therapy with aminopenicillin that confirmed as appropriate.

Also, particular attention should be given to immunocompromised patients since in a couple of cases have been reported association of PUBS with severe complications12. Actually, our patient had a history of cancer but was considered cured and she didn’t receive antineoplastic therapy.

Interestingly, in our case, replacement of urinary catheter prior to the complete resolution of infection resulted to recurrence of purple discoloration of the urine bag. Thus, we could say that the presence of discoloration after change of catheter may indicate the need of immediate antibiotic treatment to prevent infection complications (such as urosepsis) given the increased risk due to comorbidities.

Concluding, PUBS presence must be recognized early to reassure patients and their carers who tend to become unusually alarmed because of discoloration of urine and perform unnecessary tests. Nevertheless, physicians should be aware because this phenomenon indicates an underling UTI due to improper care of urinary catheters.

This case was presented as poster presentation in the 45th Annual Scientific Meeting of the European Society for Clinical Investigation, Crete, Heraklion, Greece 13-16 April, 2011