Background: Primary retroperitoneal mucinous cystadenoma is a rare neoplasm, with benign biological behavior. Delay in diagnosis and treatment of this tumor may be fatal for the patient, because of complications, such as rupture, infection and malignant transformation.
Case presentation: We present a 23-year-old woman, who was admitted to the hospital because of a palpable abdominal mass and discomfort since 4 months. Computed Tomography and Magnetic Resonance Imaging scans were performed and showed two retroperitoneal cystic masses, which were excised by laparoscopy. Histological and immunohistochemical examination revealed that the inner surfaces of the cysts were lined by epithelium with features of mesothelial cells, in addition to ovarian mucinous cystadenoma. This is the 29th case and the second reported case with two contemporary cysts.
Conclusion: The origin of retroperitoneal mucinous cystadenomas is still unclear. Pathological and immunohistochemical findings proved that these tumors resemble ovarian mucinous cystadenomas but are unattached to the ovary and can arise at any location in the retroperitoneum. Surgical excision of the aforementioned tumors is the treatment of choice.

Primary retroperitoneal tumors of mucinous type and especially the benign ones1 are uncommon2. In the English literature, approximately 50 cases of primary retroperitoneal mucinous cystadenocarcinomas have been reported, whereas only 28 cases of benign neoplasm have been described. Interestingly, all cases occurred in adult women (aged 14-85 with a mean age of 39), except 4 concerning men2-5 (Table 1).

The purpose of this study is: a) to emphasize that prompt excision of primary retroperitoneal mucinous cystadenoma (PRMC) is necessary due to potential malignancy, b) to add to the international literature, one more case of these interesting tumors, c) to review the literature, d) to discuss the differential diagnosis and its histogenesis.

A 23-year-old woman, presented with a 4-month history of abdominal pain and a palpable mass in the right lower quadrant of her abdomen. There were no associated symptoms. Her past medical history was unremarkable. On physical examination, there was a protruding mass in the right lower quadrant of the abdomen which was also palpable through the abdominal wall. Routine laboratory examinations were normal. Computed Tomography (CT) scan of the upper and lower abdomen, revealed a cystic mass of about 9 x 6 cm extending from the liver to right iliac fossa. Further investigation with Magnetic Resonance Imaging (MRI) scan was scheduled in order to evaluate in detail the relation of the mass to the adjacent structures (Figure 1a). Diagnostic laparoscopy was performed and the mass was found in the retroperitoneum, consisting of two cysts (Figure 1b), which were totally excised together with their capsule and sent for pathological examination. The procedure was initiated and completed by laparoscopic approach. A sample of the cystic liquid was sent for cytological examination which showed no specific findings. The patient had an uneventful postoperative recovery and was discharged from the hospital on the first postoperative day. Nine months after surgery she is free of symptoms.

At macroscopic examination, the surgical specimen consisted of two intact cysts, measuring 10 and 2.5 cm in greater diameter, respectively. After opening, the cysts were found to be filled with a seromucinous fluid. The external and inner surfaces were smooth. The cystic wall was not more than 0.3 cm in thickness. Both cysts were fixed in 4% buffered formalin. For immunohistochemical examination, paraffin sections were stained with monoclonal antibodies against cytokeratins (CK7, CK20), a-smooth muscle actin (a-SMA), estrogen receptor (ER), calretinin and vimentin. The antibodies were obtained commercially (DAKO) and the dilutions used were: 1:400 for CK7, 1:30 for CK20, 1:500 for a-SMA, 1:1000 for vimentin, 1:200 for ER and 1:300 for calretinin.

Histologically, the cysts were lined with a single layer of mucinous columnar cells with clear cytoplasm and basal nuclei. In foci, the cells were cuboidal or flat (mesothelial). The mucinous cells resembled endocervical cells. In some areas subepithelial stroma was densely cellular and collagenous with closely packed spindle cells. Also hypocellular areas were seen, composed of elongated cells surrounded by a myxomatous substance. Full histological examination excluded any borderline or malignant foci of the excised cysts. There was no evidence of ovarian, renal or pancreatic tissue attached to the cystic wall. The cytoplasm of the mucinous cells showed positive staining with Periodic acid-Schiff (PAS) reagent with and without digestion with diastase. 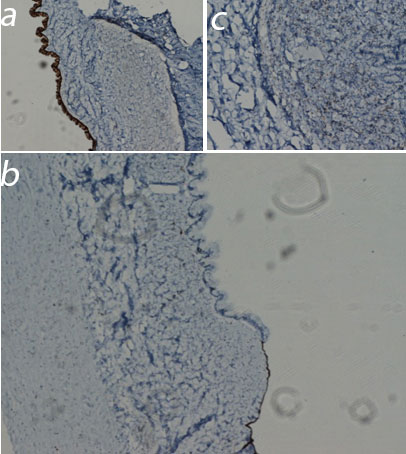 Retroperitoneal tumors account for less than 0.2% of all neoplasms1.PRMC is an extremely rare tumor due to the absence of epithelium in the retroperitoneum. Including the current, this is the 29th case of PRMC and the 2nd reported case consisting of two cysts separated from each other, by connective tissue (Table 1).

Similarly to most such cases, the patient reported herein had non-specific symptoms such as abdominal discomfort and abdominal pain, with no special characteristics. The predominant symptom was a palpable mass in the right lower quadrant of the abdomen. In most reported cases, the CT or MRI scan revealed the retroperitoneal location of the mass, and surgical excision was performed.

Preoperative diagnosis is important, as most retroperitoneal masses are malignant. However, this is difficult to achieve because no sensitive methods or reliable markers are available1. Moreover, radiological imaging, such as CT and MRI, plays an important role in describing and assessing the disease characteristics and involvement of adjacent/distant structures of the mass, but cannot exclude the malignant potential of the retroperitoneal masses. On the other hand, serum tumor markers such as CA-125, CA 19-9, CEA, CA 15-3 and a-FP rarely aid in the diagnosis or follow-up26. The aforementioned markers are found to be normal, except in rare cases15. The final diagnosis remains postoperative and rests on histological examination.

PRMC must be differentiated from other cystic neoplasms, benign or malignant. Benign diseases include lymphocele, pancreatic pseudocyst and cystic lymphangioma. Malignant tumors include cystic teratoma, cystic mesothelioma and pseydomyxoma retroperitonei. PRMC should also be distinguished from tumors of the ovaries or renal tumors13,16,19.

Although there is no simple method for classifying retroperitoneal masses, a reasonable approach is to consider them as being predominantly either solid or cystic. Further subdivision includes neoplastic or non-neoplastic cystic tumors. The former can be classified into 3 pathological types: The first is benign and is referred to as cystadenoma. The lining epithelium of the second type contains foci of proliferative epithelial cells of borderline malignancy, and thus is referred to as borderline cystadenoma. The third type is the cystadenocarcinoma.As there are no epithelial cells in the retroperitoneum, many questions are raised concerning the histogenesis of PRMC. Several hypotheses regarding the origin of PRMC have been described. One theory involves ectopic ovarian tissue in the retroperitoneum. This theory is based on morphological histochemical and immunohistochemical similarities between PRMC and mucinous ovarian cystadenoma. Countering this view is the fact that ectopic ovarian tissue is found in the cystic wall in very few cases1,5. Most authors suggest that these neoplasms arise from an invagination of multipotential mesothelium with subsequent mucinous metaplasia of the mesothelial lining cells giving rise to a mucinous cyst that grows. This opinion is reinforced by the fact that calretinin -a mesothelial marker- stains the cuboidal and flat cells positively5,6.

Histogenetically, the two cysts in the reported case may have arisen from two foci of multipotential mesothelial remnants. Regarding progression of these cysts, one may hypothesize that should they had not been excised, they might have continued to grow or their wall could have been torn in areas, resulting in a multilocular cyst of unknown behavior (borderline malignancy or cystadenocarcinoma). It is certain that larger cysts are associated with more severe symptoms and a higher likelihood for complications.

Most pelvic cystic masses in women arise from the ovary. When confronted with the aforementioned tumors, in order to avoid confusion or error, someone must include the retroperitoneal tumors in the list of the differential diagnoses. In order to exclude the co-existence of adenocarcinoma, multiple samples from various areas of the tumor wall must be taken. Complete excision is imperative to prevent relapses or a possible malignant transformation to cystadenocarcinoma.