Background and Aim: Primary retroperitoneal mucinous cystadenocarcinoma (PRMC) is a very rare tumor. To date, less than 50 cases of PRMC have been described in the English literature.
Description of the case: We report a case of PRMC in a male patient who presented with chronic lower back pain for 8 months. Computed tomography (CT) showed a retroperitoneal mass in the right abdominal cavity, measuring approximately 4cm × 3cm. At laparotomy, a predominantly cystic, well-encapsulated mass was observed in the right retroperitoneum. The mass was excised without rupture. The final diagnosis of PRMC was confirmed by pathology.
Conclusion: To our knowledge, this is the 5th published case report of a PRMC in a male patient. No other reported cases of PRMC in Chinese men are available in the literature. A literature review of PRMC in the English language literature is also provided.

Primary retroperitoneal mucinous cystadenocarcinoma (PRMC) is an extremely rare tumor, the pathogenesis of which remains unclear and controversial1,2. Because of the rarity of these tumors, it is hard to determine their exact origin and proper treatment. According to some authors, the tumor arises in heterotopic ovarian tissue3-5. We report a case of PRMC in a male patient. The occurrence of such a tumor in a male patient questions this theory. To the best of our knowledge, this is the 5th published case report of a PRMC in a male patient1,6-8. No other reported cases of PRMC in Chinese men could be identified. An English literature review of PRMC, captured by Medline is provided

A 63-year-old man presented with chronic lower back pain for 8 months. He denied any history of blood transfusion, alcohol abuse or medications. His past medical and family history was noncontributory. He was not a smoker. His physical examination was normal. Laboratory evaluations, including carbohydrate antigen (CA19-9), carcinoembryonic antigen (CEA) and α-fetoprotein (AFP), were within normal limits. The computed tomography (CT) showed a retroperitoneal mass, measuring approximately 4cm × 3cm × 3cm, in the right abdominal cavity without invasive infiltration of adjacent abdominal organs (Figure 1). 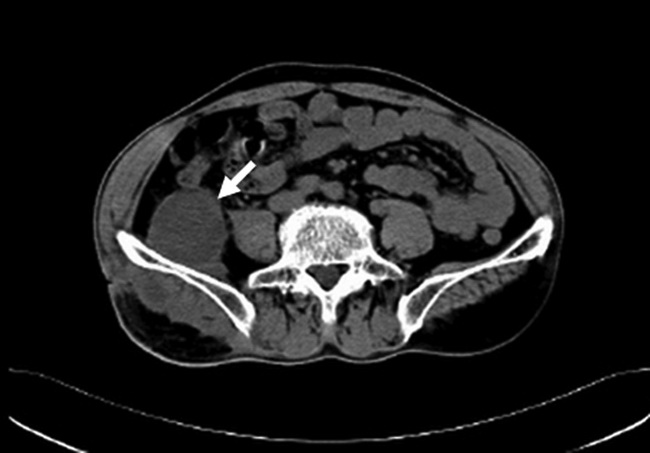 At laparotomy, a predominantly cystic, well-encapsulated mass was identified in the right retroperitoneum. The cystic wall had no apparent connection with any organs and showed no evidence of abdominal spread. The cyst was completely excised without rupture. On gross examination, the mass was a multiloculated cyst with abundant intracyto­plasmic mucin. The pathological examination revealed a micropapillary inner lining that was covered with mucinproducing columnar epithelial cells (Figure 2). The final diagnosis of PRMC was confirmed. 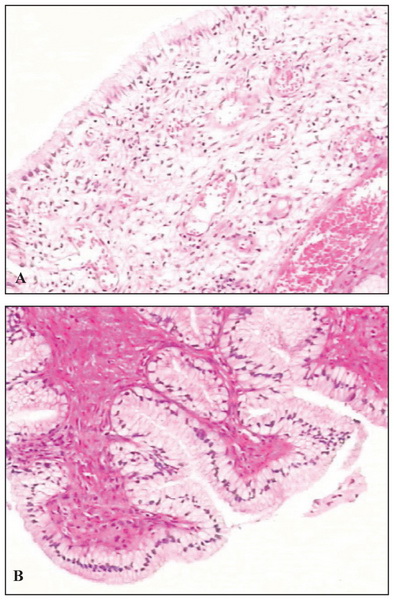 Figure 2: The papillary inner lining is covered with columnar epithelial cells. The upper parts of the papillae show basally located nuclei and a clear cytoplasm. Papillae are covered with marked atypical cells that display pseudostratification, atypical nuclei, and an increase of mitotic figures (A: HE, ×40; B: HE, ×200).

The patient was discharged on the 7th postoperative day and was not given any additional treatment. He was followed up for 13 months without any evidence of local recurrence or metastases.

From the first case described by Douglas et al9 in 1965, less than 50 cases of PRMC have been described in the English literature. PRMC occurs almost exclusively in women, with the excep­tion of 4 male cases reported in the literature1,6-8. Why these cases are more prevalent in women is unknown but may relate to their development. As shown in Table 1, in the cases reported to date, the first male patient was reported by Motoyama et al1 with little mention of clinical data and follow-up. The second male patient, described by Thamboo et al6 presented with a large retroperitoneal cystic tumor measuring 24 × 20 × 16 cm, which was removed intact. The third one was reported by Green et al7 with the largest tumor ever reported, measuring 26 × 21 × 16 cm. Hrora et al8 described the fourth case with multiple retroperitoneal masses.

Although the exact origin of PRMC remains unclear, four main theories have been put forward regarding its pathogenesis. One hypoth­esis suggests that the tumor arises from a teratoma with predominant mucinous epithelium10,11, whereas other authors postulate that it is caused by intestinal duplication, also known as enterogenous genesis12. The third hypothesis supports that the tumor arises from heterotopic ovarian tissue3-5. Despite the similarities in morphological and immunohistochemical profiles of ovarian mucinous tumors and primary retroperitoneal mucinous tumors, the theory of an origin from ectopic ovarian tissue, however, cannot account for a tumor arising in a male patient. Thus, the occurrence of such a tumor in a male patient denies this theory. The most popular theory of the pathogenesis of PRMC is that invaginations of the peritoneum result in inclusion cysts that undergo mucinous metaplasia (including our case), thus resulting in a mucinous cystadenoma13-15.

PRMCs often develop earlier in women with a mean age at presentation of 42.4 years (range: 17-86 years), whereas the diagnosis was assessed in the four previous male patients at 83, 63, 64 and 42 years respectively1,6-8. The most common symptom is abdominal discomfort and a slowgrowing pelvic or abdominal mass. In most cases, clinical course appears to be indolent. However, these tumors can become aggressive.

Preoperative diagnosis is difficult because of nonspecific symptoms and the scarce aid of diagnostic modalities. Tumor markers, such as CEA and CA19-9, are not very helpful due to their lake of specificity with other tumors, such as ovarian cyst, cystic lymphangioma, cystic mesothelioma, non-pancreatic pseudocyst and renal cyst2. Ultrasonography, CT and magnetic resonance imaging are often used to localize the tumor. However, these methods cannot easily differentiate the origin of the retroperitoneal tumor. In addition, needle biopsy may be a reliable method. If the biopsy shows mucin, then a PRMC is much higher on the differential diagnosis. However, one drawback is that needle biopsy is not a good measure to determine malignancy in cystic tumors.

The differential diagnoses in PRMC include metastatic mucinous tumors from sites such as the ovaries, the intestines (including the appendix) and the pancreas. In addition, benign renal cystic disease or renal lymphangioma can also present as slow growing, flank, or abdominal masses that have an indolent clinical course. These can be confusing because diagnosis is often made through surgical excision. Thus, these have to be excluded by careful history taking, clinical examination and diagnostic imaging.

The treatment of PRMC is not well established. To date, radical tumor excision appears to be the treatment of choice2,3,6,10,11,14. Given the assumption that PRMC arises in heterotopic ovarian tissue, many authors advise hysterectomy with bilateral salpingo-oophorectomy, either simultaneously or later at re-exploratory laparotomy2-5,10,12. Adjuvant chemotherapy has been attempted in some patients with limited success. Chemotherapy should be limited to ruptured tumors during surgery or when invasion to adjacent structures is evident13,15. None of the 5 male patients (including our case) received chemotherapy.

Prognosis of PRMCs remains uncertain because of their rarity and the short follow-up of the patients. The longest reported follow-up is 6 years in women and 18 months in men6,13. It is difficult to determine whether these tumors have a similar clinical behavior and prognosis in men and women. Our case was followed up for 13 months without recurrence or metastases after the initial surgery at the time of reporting. Long-term follow-up after surgical removal of this rare tumor with ultrasound or CT scanning appears thus essential.

Preoperative diagnosis of PRMC is difficult because of non-specific symptoms and the scarce aid of diagnostic modalities. To date, extirpative surgery appears to be the treatment of choice, and the role of adjuvant chemotherapy has yet to be determined. Although our case shares similar histologic features with female patients, given the paucity of cases, it is hard to determine whether these tumors have a similar clinical behavior and prognosis in men and women.

The authors declare no conflicts of interest

The authors would like to thank Prof. Ming-Feng Zhang (Department of Pathology, Southeast Hospital of Xiamen University) for pathological guidance.