Background: The coexistence of an oncocytoma and a papillary renal cell carcinoma (PRCC) in the same neoplastic mass constitute a collision tumor and is an extremely rare entity. Until now, only six incidentally diagnosed cases have been reported, concerning patients older than 65 years.

Case report: A 57-year-old man was admitted to the Emergency Department with acute pain and anemia, due to renal hematoma following rupture of such a neoplastic collision mass. The patient underwent an emergency nephrectomy, which revealed a 10.6 cm oncocytoma and a 1.3 cm PRCC. He had an uncomplicated postoperative recovery and remained healthy at the 65-month follow-up, the longest of all previous cases.

Conclusion: While prognosis appears favorable, the current report shows that these collision tumors may cause emergency and dangerous medical conditions that deserve prompt treatment. HIPPOKRATIA 2017, 21(2): 105-107.

Oncocytoma is the second most common benign renal neoplasm, following angiomyolipoma, and accounts for 3-9 % of all primary neoplasms of the kidney. It mainly affects aged men (male to female ratio of 2.6, mean age 68 years) and presents with a median size of 3.2 cm. Oncocytomas are usually unifocal, mostly asymptomatic, discovered incidentally. However, a few symptomatic patients may describe flank pain, hematuria or a palpable mass. These neoplasms originate from collecting duct intercalated cells1.

Papillary renal cell carcinoma (PRCC) comprises 10-15 % of all renal cell carcinomas (RCC)s. It occurs in patients from 30 to 80 years of age and is commonly characterized by multifocal appearance. PRCC is classified into two subtypes (1 and 2), with the former having a better overall survival. Similarly to clear cell RCCs, PRCC arises from proximal tubular epithelial cells, although PRCC reserves a better prognosis2.

The coexistence of renal neoplasms with oncocytomas has been described, commonly involving chromophobe RCCs or clear cell RCCs. However, the simultaneous occurrence of an oncocytoma and a concomitant PRCC, forming the same neoplastic mass is extremely infrequent. As these two entities have different cell origin, the existence of a PRCC within an oncocytoma constitutes a biological paradox or distinctiveness3-5.

Collision neoplasms are termed genotypically and phenotypically adjacent but independent tumors at the same site. They may arise from either common precursor cells and evolve into two different tumors or two separate-unrelated cell populations that proliferate and cause the same result. The oncocytoma and PRCC complex follows the second process3,6. This report describes an exceptional case of a renal collision tumor (PRCC within an oncocytoma), which for the first time caused an emergency clinical condition that demanded immediate surgical approach.

A 57-year old man was admitted to the Emergency department due to diffuse abdominal pain and nausea of sudden onset. His past medical history was unremarkable. The physical examination revealed intense pain at the left upper quadrant. His arterial blood pressure was 110/75 mmHg with 115 pulses/min. Laboratory blood investigations showed anemia [hematocrit (Ht): 33 %, hemoglobin (Hb): 10.5 g/dl] and elevated values of C-reactive protein (155 IU/l). The renal and liver profiles were within normal range. A helical multi-slice computerized tomography (CT) was requested, which revealed a perirenal hematoma and a mass in the lower pole of his left kidney (Figure 1). Taken into consideration the clinical examination, the patient’s past (six months before) hematological profile (Ht: 45 %, Hb: 14.6 g/dl) and a repeat blood test three hours later which showed a further Ht-Hb decrease (30.5 % and 9.8 g/dl, respectively), the medical personnel decided a radical left nephrectomy that was performed six hours after his admittance. The patient remained hospitalized for six days and recovered uneventfully. He presented no recurrence or metastasis at the 65-month follow-up, in the annual CT scans.

Figure 1: Consecutive images (1a-1c) of abdominal helical multi-slice computerized tomography, showing a hematoma caused by the rupture of a collision tumor (a papillary renal cell carcinoma within an oncocytoma); perirenal hematoma at the left kidney (1a-arrow); intrarenal hematoma mainly located at the lower pole (1c-oval). Solid tumor mass with contrast enhancement in the postnephrographic phase (1b-oval). The radiologic appearance is atypical for a specific tumor as the parenchymal architecture is distorted due to intrarenal hemorrhage and perirenal hematoma.

The histopathological report described a kidney oncocytoma (grey, brown, and white mass) 10.6 cm in diameter in the lower pole and a PRCC type II (white, papillary, capsulated, nodular mass) 1.3 cm in diameter within the oncocytoma. Microscopically, the oncocytoma presented tubular and alveolar general pattern, including polygonal or round cells with prominent eosinophilic, granular cytoplasm. The cellular nuclei appeared small, uniform and round, predominantly located at the center of the cells. Conversely, the PRCC microscopic features included a characteristic papillary architecture, with papillae lined by pseudostratified layers of cells, the latter containing abundant eosinophilic, granular cytoplasm (Figure 2). In immunohistochemistry staining, the oncocytoma was positive for E-cadherin, CD117 and cytokeratin 7 (focal positivity) and negative for vimentin and CD10, while the PRCC was positive for cytokeratin 7, vimentin and CD10, and negative for E-cadherin and CD117 (Figure 3a, Figure 3b). 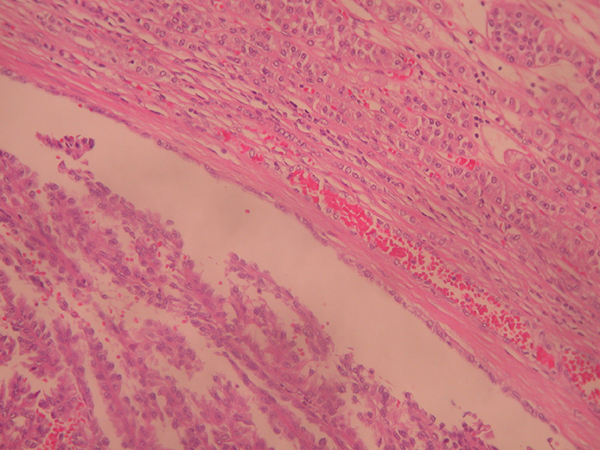 Figure 2: Oncocytoma on the right upper corner including nests dispersed in fibrous stroma and homogeneous eosinophilic cells with round regular nuclei, in proximity with a papillary renal cell carcinoma on the left lower corner forming a papillary pattern (hematoxylin and eosin stain, magnification 200x) 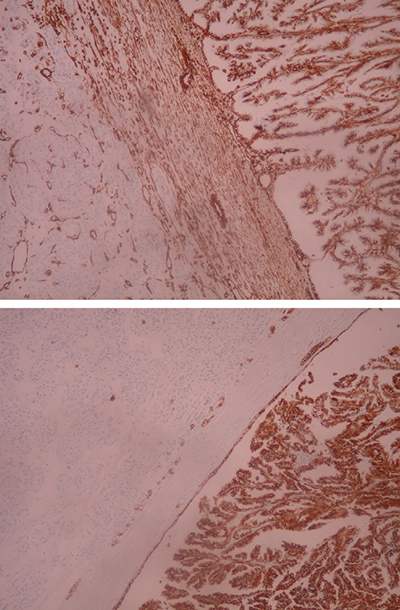 Collision neoplasms may appear in multiple organs of the human body, including the liver (hepatobiliary collision tumors such as hepatocellular carcinoma and cholangiocarcinoma), the suprarenal glands (adrenal collision tumors such as pheochromocytoma and adrenal adenoma), the stomach (such as gastrointestinal stromal tumor and leiomyosarcoma), the thyroid gland, the brain, etc7. In the kidney, these rare neoplasms may consist of cystic lesions (simple or hemorrhagic) located within the renal parenchyma or solid lesions. The second category, being more interesting due to its rarity and potential malignant features, may include various combinations of solid tumors, such as angiomyolipoma and clear cell renal cell carcinoma, oncocytoma and mucinous tubular and spindle cell carcinoma, lymphoma and renal cell carcinoma, PRCC and chromophobe cell carcinoma, oncocytoma and PRCC8-11.

Regarding imaging appearance, mainly contrast-enhanced CT scans or magnetic resonance imaging, collision tumors manifest atypical characteristics that offer limited information in the diagnostic process. Apart from cystic lesions which lack contrast enhancement, clear cell RCC tends to exhibit exophytic growth, heterogeneous appearance and hypervascularity compared to PRCC which depicts low contrast enhancement due to hypovascularity2. Furthermore, attempting to distinguish oncocytomas from PRCCs researchers frequently describe oncocytomas with a central scar and high contrast enhancement due to hypervascularity. However, the aforementioned radiologic features although promising and useful they may be, are neither precise nor consistent to support a definitive diagnosis1,8. The contrast-enhanced CT scan in our patient revealed unspecific data concerning the type of the tumor, including intensely and less enhancing areas of solid lesions, the architecture of which was considerably distorted due to the hemorrhage and the perirenal hematoma, especially in the lower pole of the kidney. Interestingly, no similar images exist in the bibliography to compare, because this collision tumor was automatically ruptured constituting a unique case.

In the English literature six cases of such renal collision tumors have been described (Table 1). This is the first case with an emergency clinical condition, perirenal and intrarenal hemorrhage, in a middle-aged man. All previous cases concerned old patients (age >65years), who were diagnosed incidentally or presented with minor symptoms. Furthermore, the tumor has the biggest size of all previous cases, while the follow-up is also the longest (65 months)3,12,13. Due to the acute symptoms, the perirenal hemorrhage and the considerable decrease of Ht-Hb in successive measurements, a radical nephrectomy was performed by general surgeons, in the context of the exploratory laparotomy.

As this neoplastic complex is extremely infrequent, prognosis and treatment remain difficult and rather uncertain. Although rare, when a papillary component is revealed in an oncocytoma it should be monitored for a possible progression to PRCC. The prognosis appears favorable as all follow-up exams showed no recurrence or tumor progression. However, this case describes an extreme course of the disease, where these tumors may become lethal due to increased size and consequent rupture.

The authors declare no conflict of interest