Background: Primary malignant vascular tumors of bone are very rare accounting for less than 1% of primary bone malignancies. They are characterized by unknown etiology, variable biologic behavior and histological appearance. Angiosarcoma is an aggressive malignant vascular tumor derived from mesenchymal cells with endothelial differentiation.
Case Report: We present a rare case of angiosarcoma of bone in a 47-year-old male operated for a lumbar disk herniation. During his transportation from the operation theater, a pathological intertrochanteric fracture of the right hip occured. The magnetic resonance imaging (MRI) revealed a bone lytic lesion located into the great trochanter of the right femur. Open surgical biopsy of the lesion was performed and the histological examination showed primary angiosarcoma of bone. The treatment included radiotherapy (300 cGy per fraction in 13 days) followed by excision of the proximal femur and custom made total hip arthroplasty. The diagnosis was confirmed on the surgical specimen.

Angiosarcomas are uncommon malignant tumors that are composed of anastomosing vascular channels lined by atypical endothelial cells. They can occur in any organ of the body; however the development of intraosseous angiosarcoma is extremely rare. Angiosarcoma of bone appears most often in adults, from the second to the seventh decade of life. It can affect any portion of the skeleton, although the long tubular bones of the extremities and the axial skeleton are most commonly involved.

A 47-year-old man with a 4-year history of lower back pain was operated for a lumbar disk herniation, but during his transportation from the operation theater a pathological intertrochanteric fracture of the right hip occurred.

Plain radiographs showed a bone lytic lesion with undefined margins and destruction of cortical and medullary bone. The magnetic resonance imaging (MRI) revealed a bone lytic lesion located into the great trochanter of the right femur associated with a large soft tissue mass located mainly anterior and extending to the cartilaginous level of the femoral head (Figure 1). An open surgical biopsy of the lesion was performed. 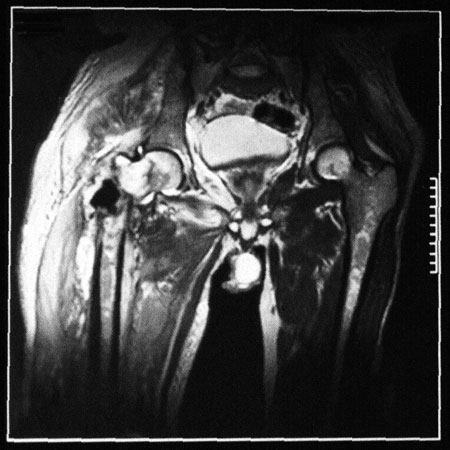 Figure 1: MRI showing a bone lytic lesion of the great trochanter of the right femur associated with a large soft tissue mass.

The biopsy material was fixed in 10% neutral buffered formalin, processed routinely and haematoxylin and eosin sections produced (Figure 2). Immunohistochemistry (Figure 3) was performed on the formalin-fixed tissue for the following: Keratin AE1/AE3, factor-VIII, Ulex Europaeus Agglutinin I (UEA-I) and CD31. 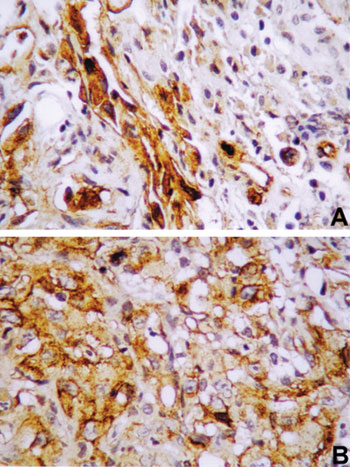 According to the histological and immunohistochemical findings, the diagnosis was that of a high-grade primary angiosarcoma of bone.

The treatment included radiotherapy (300 cGy per fraction in 13 days), followed by excision of the proximal femur and custom made total hip arthroplasty. The diagnosis was also confirmed on the surgical specimen received.

Follow-up data, unfortunately, is not available since the patient returned to his home country soon after the surgery.

Angiosarcoma is a malignant endothelial vascular neoplasm, that affects a variety of sites but commonly occurs in soft tissue and skin2. Primary angiosarcoma of bone represents <1% of primary malignant bone tumors1. It arises more commonly in young and older adults and the males are slightly more affected than females3. Angiosarcoma of bone has a tendency to occur in the short and long tubular bones of the extremities most often affecting the femur, tibia and humerus4. The aetiology of the majority of malignant vascular tumors is unknown.

Patients with angiosarcoma of bone may present with unifocal or multifocal osseous disease2. Pain is the most common presenting symptom, although neurological deficit or other symptoms depending on the size and localization of the tumor can occur. Presentation with pathologic fracture is rare, although pathologic fractures are seen slightly more frequently on radiographs. Patients with lesions of the spine may present with symptoms of spinal cord compression4.

The radiographic features of angiosarcoma of bone are not specific, but plain radiographic assessment is paramount to characterize lesions and confirm their multiplicity. Angiosarcoma presents mostly as a purely lytic mass. In low-grade tumors, the lesions tend to be well marginated, whereas high-grade tumors are poorly demarcated and often present an associated soft tissue mass. Lesional sclerosis is uncommon, although in some cases sclerosis is in surrounding bone. Periosteal new bone formation is uncommon. Multiple lytic lesions, especially involving contiguous bones, are highly suggestive of the diagnosis of angiosarcoma1,2,4.

Early detection by biopsy offers the only realistic chance of a cure. Diagnosis is based on the microscopic findings of the biopsy and immunohistochemical methods5.

Grossly, angiosarcoma usually presents bloody and generally firm in its consistency with irregular margins. Microscopically, the general histological feature of this neoplasm is the production of vascular spaces lined with malignant cells. Vascular spaces show a marked tendency for anastomosis. The vessels are packed closely together and, if fibrosis is present, it is focal. Reactive bone may be present and inflammatory cells, especially eosinophils, may be prominent. In some angiosarcomas, the endothelial cells are cuboidal, with abundant pink hyaline cytoplasm and vesicular nuclei with a prominent nucleolous, imparting an epithelioid appearance. If this is present throughout the lesion, the term “epithelioid angiosarcoma” is used. Low-grade lesions have vascular spaces more or less obvious and lined by large plump endothelial cells that penetrate the stroma and papillary fronds of cells that project into the lumen. High-grade lesions are more cellular, with atypical cells and abnormal mitoses. Epithelioid angiosarcomas are always high grade. CD31 and Factor VIII are the best diagnostic markers for high-grade angiosarcomas of bone. It is striking that keratin positivity is seen in the majority of cases, and is independent of epithelioid morphology1,2.

The differential diagnosis includes other primary vascular tumors as well as metastatic carcinoma. In fact, the distinction between a hemangioma and a low-grade angiosarcoma is often difficult. Moreover, renal cell carcinoma can simulate the appearance of angiosarcoma. In this regard, the immunohistochemical stains for Factor VIII – related antigen, CD31 or CD34 are particularly useful. Bacillary angiomatosis, also, is a process characterized by the proliferation of vessels. The endothelial cells may have epithelioid features and cytologic atypia. However, the vascular proliferation is accompanied by an inflammatory infiltrate, predominantly of neutrophils and clumps of bacteria that stain with the Warthin-Starry silver stain4,6,7.

The therapeutic alternatives in the treatment of angiosarcoma of bone are similar to those available for patients with bone sarcomas of other types. The basic options are amputation, limb salvage, radical local resection and radiation therapy3.

Several studies showed that histologic grading is the most significant factor in the prognosis of patients with malignant vascular tumors of bone. On the contrary some other studies have indicated that prognosis is unpredictable and the mortality rate can reach 50%4.

Clinicopathological correlation is of paramount importance to avoid misinterpretation as metastatic carcinoma, because of differences in their management.

This case was presented as poster presentation in the 20th European Congress of Pathology, Paris, France, 3-8 September 2005.