Background: Primary Aldosteronism is the commonest cause of secondary arterial hypertension and is due to uncontrollable aldosterone secretion by a series of adrenal disorders.
Description of the case: We describe a case of a 71-year-old female patient with uncontrollable hypertensive peaks in soils of pre-existing arterial hypertension, who was diagnosed with Primary Aldosteronism.
Conclusion: Both late onset of the disease and bilateral presence of adrenal nodes are rarely described in the literature and selection of treatment mainly depends on adrenal vein catheterization.

Primary Aldosteronism (PA) is the commonest cause of secondary arterial hypertension. Conn was the first to clarify the disorder, naming the autonomous secretion of aldosterone by adrenal adenomas after him (Conn’s Disease). PA includes adrenal adenomas, unilateral and bilateral adrenal cortex hyperplasia, the familial types of the disease and aldosterone secreting adrenal carcinomas. The identification of the underlying disease is substantial, since unilateral disorders are treated with adrenalectomy, while bilateral disease is treated conservatively (Aldosterone receptor Antagonists). In the present article, we describe a case of arterial hypertension secondary to PA of late onset, with references to the pathophysiology, diagnosis and treatment of the disease.

A 71-year-old female was admitted for hospitalization, due to atypical precordial pain, in the absence of preceding exertion, with a co-existing vague sense of fatigue and headache. Furthermore, the patient reported high values of blood pressure over the last month in soils of a pre-existing arterial hypertension, effectively controlled by medication until a month ago.

She had been diagnosed with arterial hypertension by a primary health care unit 5 years ago, without having been screened for secondary hypertension, to the best of our knowledge. Since then, she was treated with Atenolol 25 mg b.i.d. and Amlodipine 5 mg qd, reporting an optimal arterial blood pressure control. The rest of her medical history included Coronary Artery Disease, Diabetes Mellitus type II and Dyslipidemia, for which she was treated with ASA 100mg qd, Rosuvastatin 10mg qd, and Metformin 425 mg tid. Her blood pressure at presentation was 180/100 mmHg, while examination demonstrated no pathological findings. Electrocardiography (ECG) and chest X-ray indicated nothing remarkable, while the first laboratory tests were within the normal range.

During her hospitalization we recorded hypertensive peaks (Systolic BP up to 210 mmHg), with a reproduction of the initial symptoms. Those peaks that suddenly started to be recorded a month ago, with no preceding substantial change in the patient’s physical or emotional status, made us think of secondary hypertension. Thus, after appropriate preparation and having determined normal cortisol levels in a morning blood sample, we determined the Vanilmandelic Acid (VMA) concentration in 24-hour urine, as well as Plasma Aldosterone Concentration (PAC) and Plasma Renin Activity (PRA). The values were as follows: 24-hour urine VMA 1.2 mg [normal values (N) <13.6mg], PAC 40.1 ng/dl (N: 1-16 ng/dl) and PRA 0.7 ng/ml/h (N: 0.5-1.9 ng/ml/h). PAC/PRA ratio was 57.24. VMA levels were within normal range (pheochromocytoma ruled out). Subsequently, after a three-day oral sodium load, 24-hour urine was tested for the concentration of sodium (270 mmols) and aldosterone (23.9 μg).

The aforementioned values were diagnostic of PA, thus the patient underwent an adrenal computed tomography (CT), which demonstrated two bilateral adrenal nodes, 8mm in diameter (Figure 1). Their clear boundaries in addition to their low density (unenhanced attenuation value of 7 and 8.7 HU for the right and left node respectively) were indicative of adenomas. Subsequently, an echocardiogram was performed, demonstrating just an incipient concentric hypertrophy of the left ventricular walls (IVS: 1.14cm, PW: 1.18cm). We recommended an adrenal vein catheterization for venous blood sampling, but the patient strongly opposed. Thus, she was treated with Eplerenone (25 mg initially, titrated up to 50 mg consequently) added to the initial double antihypertensive therapy, achieving effective control of hypertension.

PA was first described by Conn, in 1955, in a patient with adrenal adenoma. Conn himself estimated the prevalence of the disorder around 10% of general population1. Current epidemiologic data, illustrate the disease as the commonest cause of secondary hypertension. Although PA tends to be underdiagnosed, mainly due to the absence of hypokalemia (only 9-37% of PA cases present with hypokalemia2), its prevalence is estimated 4.3-9.5% in hypertensive patients and it commonly occurs between 30 and 50 years of age3.

The diagnostic approach of PA can be summarised in three essential steps: Plasma Aldosterone Concentration (PAC) / Plasma Renin Activity (PRA) Ratio calculation, confirmatory tests of aldosteronism and distinction of the disease subtype (Figure 2). PAC/PRC rates over 23.6 are diagnostic of PA, with a sensitivity of 97% and a specificity of 94%. Aldosterone receptor antagonists should be discontinued at least 6 weeks before the examination. Our patient had a PAC/PRA ratio of 57.14. Confirmation of PA is based on oral sodium load test, saline infusion test and fludrocortisone suppression test. Oral sodium load test includes the determination of sodium and aldosterone concentration in 24-hour urine, after 3 days of increased salt intake. Rates of aldosterone>12 μg and Sodium>200 mmols are diagnostic of PA5. This test confirmed the presence of PA in our patient (Aldosterone: 23.9 μg/24h, Sodium 270 mmols/24h), so we did not proceed to saline infusion test (intravenous infusion of 2liters of saline in four hours leads to a PAC rate over 277 pmol/lt if PA is present). The fludrocortisone suppression test is rarely performed in most centers nowadays5. 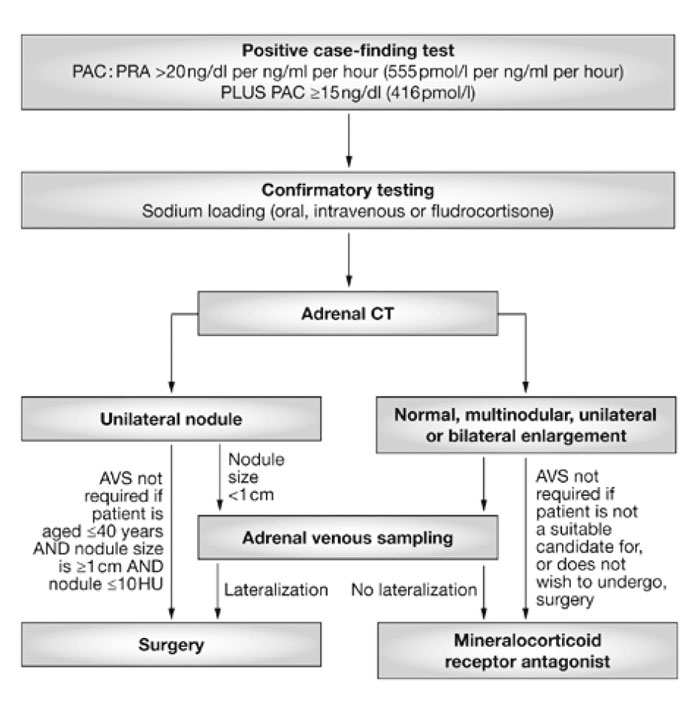 Distinction of the disease subtype is based on CT (MRI shows no superiority), adrenal vein catheterization with venous sampling and genetic screening for the familial types of the disease2. In our patient, adrenal CT demonstrated two bilateral, clearly described, adrenal nodes, with normal imaging of the surrounding reticular zone (bilateral hyperplasia ruled-out). Unenhanced attenuation values on CT <10 HU (7 and 8.7 respectively) indicated adenomas, as carcinomas present with values over 10 HU6. The crucial diagnostic question was whether we had to deal with bilateral adrenal adenoma (extremely rare situation with very few case reports in the literature) or unilateral adenoma with a co-existing inactive node (incidentaloma). In order to confirm the node activity (secretion of aldosterone), we had to proceed to adrenal vein catheterization, the gold standard for the exact diagnosis7,8. Unfortunately, our patient strongly opposed any interventional procedure, thus the diagnostic algorithm ceased in adrenal imaging.

Concerning therapeutic approach, in unilateral forms of PA, adrenalectomy is preferable9, while bilateral forms of the disease are treated conservatively, with aldosterone receptor antagonists10. Our patient was treated with eplerenone, titrated up to 50 mg qd, leading to optimal control of blood pressure.

Diagnostic approach of this case, led us to two interesting specific facts. The first one was the patient’s age, since PA usually manifests between 30 and 50 years of age. The echocardiographic findings in addition to the absence of target organ toxicity made us consider our patient’s PA as emerging. The second one was the bilateral presence of adenoma-textured, clearly described adrenal nodes. The essential question whether we had to deal with bilateral secreting adenomas or unilateral adenoma with a co-existing inactive node could not be answered, due to the patient’s opposition to adrenal vein catheterization and conservative therapy was the only choice.

Figure 2 is from the work of Mattsson C and Young WF Jr: Primary aldosteronism: diagnostic and treatment strategies11, with permission.