Skip to content
hippokratia.gr > Volume 17 (2013) - Issue 4 > Prevalence of thrombophilia in asymptomatic individuals with a family history of thrombosis

Objective: The present study investigates the prevalence of thrombophilia in individuals with first or/and second degree family history of thromboembolism.
Material-Methods: The study group consisted of 68 individuals with a first or second degree family history of venous or arterial thromboembolism, but without a personal history of thrombosis. The activity of ATIII, PC, PS, FVIII, FΧΙΙ and total homocysteine was measured on the ACL Advance coagulation analyzer. In addition, hemi-quantitative determination of CRP was performed to exclude an acute phase reaction. The existence of V-Leiden mutation was investigated by the modified pre-dilution method (1:5) with V-DEF. Prothrombin G20210A mutation was detected by the use of an in house PCR protocol. Family history was termed as follows: positive (thrombosis was reported in one parent and his/her family members) (group Α) or strongly positive (thrombosis was reported in both parents and their family members (group Β).
Results: Data analysis revealed decreased activity of ATIII:1.47%, PC:1.47%, and FXII:5.9%, increased activity of FVIII (without inflammation):11.8%, V-Leiden:13%, elevated Hcy:14.7%, and G20210A mutation:2.9%. Group A consisted of 55 individuals (74.5%), whereas group B of 16 (23.5%). The total percentage of thrombophilia was 48.5%, while the percentage within group A was 44.2% and within group B 62.5%.
Conclusion: The high prevalence of thrombophilia, reinforce the importance of an extensive laboratory thrombophilia screening when a family history of thromboembolism has been recorded, especially when it concerns both parents and/or their family members and even more when one or more acquired thrombophilic factors coexist.

Thrombosis is one of the most common reasons of death among young people, nowadays. Several factors are associated with the development of the disease, including genetic mutations that predispose individuals to a hypercoagulable state known as thrombophilia. Carriers of a genetic risk factor are at increased risk of a first venous thrombosis, particularly when exposed to environmental triggers. However, routine thrombophilia testing is controversial andresearch efforts are focused on selection criteria that may be used to increase the chance of discovering a genetic risk factor. Family history is an evident candidate.

In the literature there is no agreement on the value of the family history for the selection of patients who should be screened for thrombophilia1 even though, traditionally, textbooks and review articles recommend extensive laboratory thrombophilia screening when a family history of thromboembolism has been recorded, or when the patient has a personal history of thrombosis2-4.

The studied group consisted of 68 individuals, who responded to our laboratory announcement for recruitment of people with a first or second degree family history of venous or arterial thromboembolism, but without a personal history of thrombosis. The family history was assessed through a standard questionnaire involving the total number of first and/or second degree relatives and the number of these relatives who had suffered from a venous or arterial thromboembolism (with or without known thrombophilia). Family history was regarded positive if thrombosis was diagnosed in at least one relative. Family history was only defined as negative if all first and second degree family members were reported as not having experienced a blood clot. All participants were asked to give their signed informed consent to participate in the study.

Blood samples were collected with Sodium Citrate anticoagulant. The tubes were centrifuged immediately after phlebotomy, in 2000g/15min, and plasma sample was separated.

In addition, another blood sample was collected in 0.05 M EDTA for DNA analysis and was kept at -20o C until use.

The following blood tests were performed in the citrated plasma, on the automatic analyser ACL Advance:

A hemi-quantitative determination of CRP was performed in order to exclude existence of acute phase reaction.

PS, PC and ATIII deficiency were defined as plasma activity repeatedly below normal (PS < 63%, PC < 69%, ATIII < 76%). Persistently elevated activity of FVIII was defined as an activity level greater than 150% on 2 separate venipuncture specimens obtained at least 6 weeks apart and without the existence of acute phase reaction. Elevated homocysteine was defined as a concentration of greater than 11mmol/L. Decreased activity of factor XII were defined as an activity level lower than 65%. The cut off to discriminate between a pathological-to-normal APC-V ratio and/or normalized ratio were set at less than 2 and 0.9, respectively.

Table 1 shows medians, and observed ranges of thrombophilic factors and their prevalence, by type, in the study population6-9. Factor V Leiden, elevated factor VIII activity and hyperomocysteinemia were most common. Apart from protein S deficiency (for which no cases were disclosed), prothrombin G20210A gene variation and elevated factor VIII activity, the frequencies of all thrombophilia traits were higher than expected in the general population. The total percentage of existence of thrombophilic factor was found 48.5%. 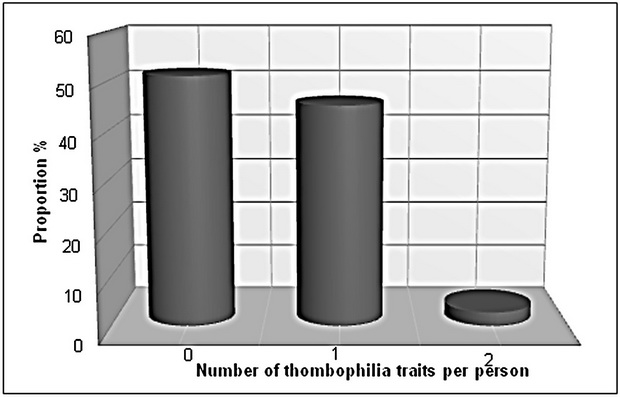 Thrombophilia is a prevalent problem with up to 10% of the population affected by one or more of the currently known inherited thrombophilias10. However, thrombophilia testing is controversial for three reasons: costs involved11,12, debate about the psychological impact of testing asymptomatic relatives13,14 and the low yield of positive tests15.

The cost cannot be taken into account in cases of high – suspicion thrombophilia, as these individuals knowing their genetic predisposition are able to avoid acquired thrombophilic factors such as smoking, oral contraception, obesity etc. coexistence of which with their thrombophilic trait would lead to a thromboembolic episode. So in these cases, the prevention of thrombosis is more cost – effective compared with the cost of treatment of a possible thromboembolic episode.

The third reason does not exist in our study group because the frequencies of all thrombophilia traits, except protein S deficiency (for which no cases were disclosed), prothrombin G20210A gene variation and elevated factor VIII activity, were higher than expected in the general population. The total percentage of existence of thrombophilic factor was found 48.5%, while within group B was found 62.5%. Most studies focus on patients with history of thromboembolism, so their results cannot be compared with our study group which is consisted of individuals with no history of thromboembolism. We were able to find only the study of Calhoon et al, which was performed in a children population without personal history of thromboembolism. The observed prevalence of individual thrombophilia traits in that study was higher than ours, but the authors declared that the observed prevalence in their study group may have been overestimated because of the potential for referral bias of patients most likely to have underlying thrombophilia. At the same time, the potential for this bias was minimized by the fact that the indication (albeit consensus-based) for screening in all children was the presence of a first- or second-degree family history of early thromboembolism, rather than heterogeneous reasons for screening17.

Therefore, we propose an extensive laboratory thrombophilia screening when a family history of thromboembolism has been recorded especially when it concerns both parents and/or their family members and even more when one or more acquired thrombophilic factors coexist.

The Authors declare no conflict of interest.