Skip to content
hippokratia.gr > Volume 17 (2013) - Issue 4 > Prevalence of Crimean-Congo hemorrhagic fever virus antibodies in Greek residents in the area where the AP92 strain was isolated

Background: Crimean-Congo hemorrhagic fever (CCHF) is a viral disease with fatality rate up to 30%. Up to date, only one CCHF case has been reported in Greece, while a distinct virus strain (AP92) had been isolated in 1975 from ticks in Imathia prefecture, northern Greece. The aim of the present study was to estimate the CCHF virus (CCHFV) seroprevalence among humans residing in the prefecture of Imathia, and the neighboring prefecture of Pella, and to investigate the risk factors associated with the seropositivity.
Material and Methods: A total of 277 persons randomly selected from the general population were tested for the presence of CCHFV IgG antibodies. Additional 51 persons belonging in groups with risk for acquisition of CCHFV infection (19 slaughterhouse workers and 32 hunters) were also tested. All participants filled in a questionnaire related to demographics and probable risk factors (e.g. occupation, former tick bite, animal contact).
Results: Six of the 277 (2.2%) persons were found to carry CCHFV IgG antibodies: 3 in Imathia and 3 in Pella prefecture, resulting in seroprevalence of 1.7% and 2.9%, respectively. History of tick bite, residence in a hilly territory and increased age were significantly associated with CCHFV seropositivity. None of the slaughterers was found IgG-positive, while CCHFV IgG antibodies were detected in a 67-year old hunter who reported agricultural activities and a former tick bite.
Conclusions: A relatively low seroprevalence is observed in the area where the AP92 strain has been isolated, with tick bite being significantly associated with CCHFV seropositivity. Further studies in ticks in the area will show whether are they infected by the AP92 strain or other more pathogenic CCHFV strains and at which rate.

Crimean-Congo hemorrhagic fever (CCHF) (genus Nairovirus, family Bunyaviridae) causes a severe disease to humans with a case-fatality rate up to 30%. It is transmitted to humans by tick bite or by direct contact with blood or tissues of CCHF patients or viremic livestock. CCHF is endemic in several foci in Asia, Africa and southern Europe, and its geographic distribution coincides with that of the Hyalomma ticks. Endemic foci are present in Turkey, Albania, Kosovo and Bulgaria1-7, while the first CCHF case in Greece was reported in 2008, when a woman died in Komotini city in Northeastern Greece8,9. A CCHF virus (CCHFV) strain, AP92, was isolated from Rhipicephalus bursa ticks collected in 1975 from goats in Vergina village (Imathia prefecture, northern Greece) at the foothills of Pieria mountain10. This strain differs by >20% from all known CCHFV strains, including that detected in the fatal case in Greece in 2008. A seroprevalence study conducted in 1980 among residents of Imathia prefecture revealed that 6.1% had IgG CCHFV antibodies11. One veterinarian working with this strain during the isolation procedures, presented high level of IgG antibodies against CCHFV, detectable even 10 years later; however, he did not present any clinical symptoms. Similarly, the IgG-positive persons in Imathia prefecture did not recall any symptoms resembling CCHF. The first clinical case due to an AP92-like strain was reported in 2009 in Istanbul, Turkey, in a 6-year old child, who presented with fever, malaise and loss of appetite, three days after a tick bite12; a second case, also mild, was observed in middle Anatolia, Turkey13. These facts led to the hypothesis that AP92 AP92-like strains have low pathogenicity.

A seroprevalence study conducted in Greece during 1981-1988 among 3388 persons, mainly farmers, wood cutters and shepherds, showed that 1% (range 0-9.6%) of the population had CCHFV IgG antibodies14, while a recent country-wide study showed an overall seroprevalence of 4.2% (range 0 – 27.5%)15. The aim of the present study was to re-investigate the area where the AP92 strain was isolated, and estimate the seroprevalence in the general population and in two risk groups, slaughterers and hunters.

Serum samples were collected prospectively during 2010-2011 from 277 apparently healthy persons (male 158, 57%), aged 12-89 years (median 47 years), randomly selected among persons who visited the local health centers either for testing (not for infectious diseases) or for blood donation; among them, 175 were residents of the Imathia prefecture (Vergina is located in this area), and 102 were residents of the neighboring prefecture of Pella. Since slaughterers and hunters are considered to belong in risk groups for acquisition of CCHFV infection, 19 slaughterers (18 males) aged 20-54 years (median age 29 years) and 32 hunters (all males) aged 18-80 years (median 51 years), residents of the prefectures of Pella and Imathia, were additionally tested.

Participants were informed about the study and were asked to fill in a questionnaire about the place of residence, age, occupation, contact with animals, history of tick bite and other activities or data related with increased risk of CCHF infection. They all provided oral consent before participating.

Serum samples were tested for CCHFV IgG antibodies by commercial ELISA (Vektor-Best, Koltsovo, Novosibirsk, Russia) according to the instructions of the manufacturer. The IgG positive samples were additionally tested by IFA (Euroimmun Medizinishe Labordiagnostika AG, Lübeck, Germany). The assay is based on the biochip technology using recombinant glycoprotein precursor (GPC) and nucleoprotein (N) antigens.

Statistical analysis was performed using the IBM SPSS 19.0 statistical package. The relationship between the categorical variables was assessed using chi-square test or Fisher’s exact test when the expected count of cells was <5. Odds ratio (OR) and 95% confidence intervals (95% CIs) were obtained to identify factors associated with CCHFV seropositivity. Statistical significance was defined as a two-tailed p value of less than 0.05.

Among the six IgG positive persons from the general population, three were residents of Imathia and three of Pella prefecture (Table 1). The seroprevalence in the two prefectures did not differ significantly (Imathia 1.7%, Pella 2.9%, p=0.504). CCHFV IgG antibodies were detected in five males and one female, with seropositivity in males being four times higher than that of females, however this difference was not significant (Table 1). The median age of seropositive persons was 67 years (range 48-77) and differed significantly from that of the negatives (median age 47 years, range 12-89) (p<0.05).

Among participants, 168 answered the question of former tick bite, and 24 (14.28%) gave a positive answer. CCHFV IgG antibodies were detected in two of them (8.3%), differing significantly from those who did not report a former tick bite, with seropositivity in those being bitten (8.3%) being almost 12 times higher than that observed among participants who did not report a tick bite (0.7%) (Table 1). The median altitude of the place of residence of the IgG positive persons (122 m, range 91-572 m) did not differ significantly from that of the IgG negative persons (median 131 m, range 5-1200) (p>0.05). However, when places were grouped into three categories according to the altitude (0-80m, 81-300m, and >300m), seropositivity differed significantly among categories (p<0.05) (Table 1). The residence places of the six IgG-positive persons were located at the foothills of mountains (Pieria, Paiko and Vermio mountains), (Figure 1): five were living at an altitude of 81-300 m and one at an altitude of 572 m. 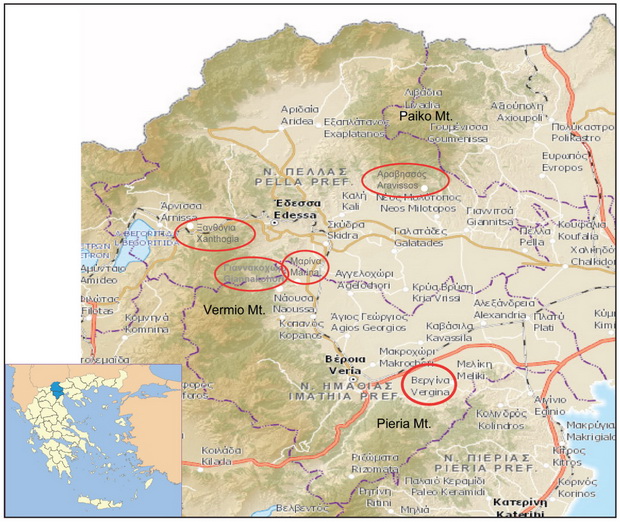 Figure 1: Sites of residence of the persons who had IgG antibodies against Crimean-Congo hemorrhagic fever virus in the prefectures of Imathia and Pella, Greece. The location of the two prefectures in the map of Greece is seen in the inset.

CCHF is endemic in the Balkans and sporadic cases or outbreaks occurred almost every year. Although a seroprevalence of 4.2% has been reported in Greece, only one CCHF case has been diagnosed up to now. It was hypothesized that a CCHFV strain of low pathogenicity might be the cause of the IgG-seropositivity. As currently AP92 or AP92-like strains have not been associated with severe disease in humans, we would like to estimate the seroprevalence among human population in the prefectures of Imathia and Pella, which is the broader area where AP92 was isolated. It was found that the seroprevalence was 1.7% and 2.9% in the prefectures of Imathia and Pella, respectively. These rates are lower than those detected in a previous study (9.6% and 4.3%, respectively)14, however the persons enrolled in that study belonged to high risk groups (farmers, woodcutters and shepherds), while participants of the present study were selected randomly.

Seroprevalence increased with age; this is expected, since the probability of acquiring the infection is increased with age. Agricultural activity is also considered as risk factor for CCHFV infection16. In the present study five of the six IgG-positive persons were farmers; however farming did not reach the significant level associated with CCHFV seropositivity. In contrast, former tick bite was a significant factor. The IgG-positive hunter was a 67-year old male from Pella prefecture, and reported agricultural activities and a former tick bite.

Since tick bite was proved to be a risk factor for CCHFV seropositivity in the studied area, extensive studies in ticks are planned to test their infection rate and to characterize the specific strain circulating in the region. The facts that: i) the disease emerged in Greece, ii) endemic foci exist in the neighbouring countries, and iii) competent vectors are present in the country, necessitates active surveillance of human CCHF infections while studies on ticks will show whether they are infected by the AP92 strain or other more pathogenic CCHFV strains.

The work is part of the CCH Fever network (Collaborative Project) and the ANTIGONE project, both supported by the European Commission under the 7th Framework Programme (Grant agreement numbers 260427 and 278976, respectively).

None declared by Authors

The study has been approved by the ethical committee of the Medical School of Aristotle University of Thessaloniki, Greece.