Background/aim: Methicillin-resistant Staphylococcus aureus (MRSA) is a major cause of health- and community-associated infections; its prevalence in Greece is among the highest in Europe. We investigated the prevalence and molecular epidemiology of MRSA in a tertiary Greek hospital.
Material and Methods: Spa typing and random polymorphic DNA analysis were used to investigate the molecular epidemiology of 28 MRSA isolates during May 2010 to May 2011 in a tertiary hospital in Northern Greece.
Results: Nine spa types were detected; t003 was the predominant (32.1%) one, detected in various wards and throughout the study period, while t037 was recovered only from intensive care unit patients, and only in April 2011, suggestive of an epidemic. Additional rare types were detected for the first time in Greece.
Conclusions: Spa typing and random polymorphic DNA analysis gave an insight into the epidemiology of MRSA in a Northern Greece hospital. Concerning the distribution in the hospital, the predominant spa type t003 was present in various wards, and was constantly detected throughout the study period, very suggestive of an epidemic, while other types were detected only in specific wards. Our data underline the need for surveillance, typing and constant reassessment of existing strategies to control MRSA.

Methicillin-resistant Staphylococcus aureus (MRSA) is a major cause of health- and community-associated infections; its prevalence in Greece is among the highest in Europe. Although, Greece is one of the countries that reported significantly MRSA decreasing trends over the last four years, the percentage of MRSA is still above 25% according to the latest epidemiological report of the European Centre for Disease Prevention and Control1. Knowledge of the prevalence and epidemiology of hospital-associated MRSA is essential for guiding infection control inside a hospital setting in order to restrict further spread of MRSA, while it facilitates the understanding of MRSA epidemiology worldwide. The repeat region of S. aureus protein A (spa) gene is highly polymorphic, consisting of a variable number of 24 (or 21 or 27)-bp repeats; variation in nucleotide composition and order of the repeats results in different spa types. Sequencing of the spa gene has been established as the most reliable and discriminative method for MRSA typing2. Random polymorphic DNA (RAPD) analysis is also used for typing of bacterial isolates. Taking advantage of these molecular methods, we investigated the prevalence and molecular epidemiology of MRSA in a tertiary Greek hospital.

Detection and antibiotic susceptibility of MRSA were determined using the Vitek II system (P-580 and P-613 card, bioMérieux, Marcy l’Etoile, France).). The spa gene was amplified and sequenced and typing was performed through the Rindom Spa server (spaserver.ridom.de). The isolates were further analyzed by RAPD using the primer BG24. Analysis of the RAPD patterns and construction of the phylogenetic tree were performed using the BioNumerics software (Applied Maths, NV, Sint-Martens-Latem, Belgium).

The most common type of the present study was t003, with all these strains presented similar antimicrobial resistance. All t003 strains were resistant to ciprofloxacin (MIC≥8), clindamycin (MIC≥8), erythromycin (MIC≥8) but sensitive to gentamicin (MIC≤0.5). Regarding the t003 strains’ sensitivity to fucidic acid, 5 were sensitive (MIC≤0.5), 2 intermediate (MIC=4) and 4 resistant (MIC≥32).

The second most prevalent type was t037 with the following antimicrobial resistance phenotype: sensitive to clindamycin (MIC≤0.25), erythromycin (MIC≤0.25) but resistant to gentamicin (MIC≥16), ciprofloxacin (MIC≥8) and fucidic acid (MIC≥32).

RAPD analysis revealed three main clusters, one contained strains from Plastic surgery (from May to November 2010), the second from Orthopedic and Plastic surgery wards (from May 2010 to April 2011) and the third cluster contained strains from the Intensive Care Unit isolated during April 2011. MRSA isolates of the same spa type presented similar clustering in RAPD analysis (Figure 1). 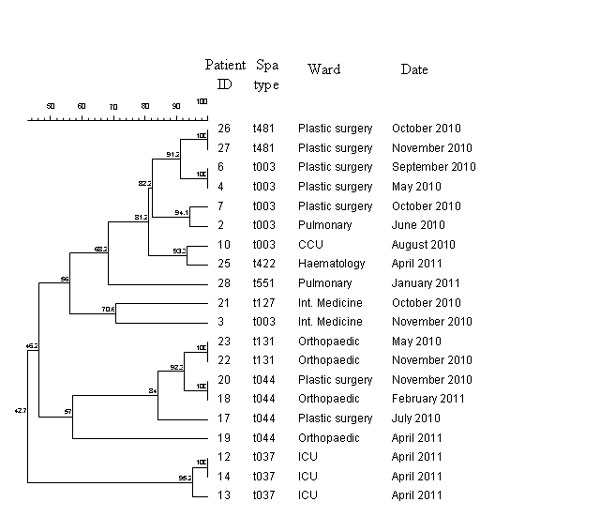 The most commontype of the present study was t003, a type which is closely associated with sequence type (ST) 225, but also to ST55. According to a multicentre study involving 357 laboratories serving 450 hospitals in 26 European countries, type t003 was fourth in prevalence among MRSA isolated from patients with invasive S. aureus infections5. A predominantly regional distribution was seen; t003 was the most frequent type in the Czech Republic (66.7%) and second in Germany and western Poland (28.1% and 29.8%, respectively)5. This type has a demonstrated ability to spread rapidly and to predominate in the hospital environment, replacing other MRSA strains6. It seems to be almost entirely restricted to hospital environment, since it has not been reported from asymptomatic S. aureus carriage outside of hospitals, and is very rarely found among isolates from community-associated MRSA infections.

The second prevalent type was t037, which is closely associated with ST240, but also to ST239 and ST2415. This spa type is characteristic of the pandemic Brazilian MRSA clone7, which is one that accumulated more antibiotic resistance determinants and, besides being seen in some European countries, is one of the most important clones in Asian countries8,9. Spa type t037 has a strong capacity to cause epidemics; this has happened in a hospital in South-western Greece10. According to the above mentioned multicentre study, t037 was eighth in frequency (2.8%) among MRSA in Europe, and second (20%) in Greece5. In the present study, type t037 was found only in ICU patients, and only during April, probably suggestive of an epidemic. The third most prevalent type was t044, which is closely associated with ST805. It is widely disseminated in Europe and is the currently prevailing among community-acquired MRSA11. This type predominated also in previous studies in Greece12,13.

The other spa types (t131, t481, t127, t264, t422, t551) were detected with less than 2 isolates per type. According to Ridom database, these types are seldom observed in Europe (<1.7%). Specifically, 2 isolates belonged to type t131, which is also associated with ST80. It has been previously observed in 1/27 MRSA isolates in a Greek hospital12. Two additional isolates were typed as t481. This type was found in low frequency among MRSA in hospitals in the Dutch-German border area14.

Concerning the distribution in the hospital, t003 was present in various wards, and was constantly detected throughout the study period, while other types were detected only in specific wards (Table 1). This was the case for t481, detected only in plastic surgery in October-November 2010, and t037 which was present only in ICU, and only in April 2011 (no other MRSA was isolated in ICU during the study period).

Spa typing and RAPD analysis gave an insight into the epidemiology of MRSA in a tertiary hospital of Northern Greece. Although there are many studies on the prevalence of MRSA in Greek hospitals, the number of studies on molecular typing, and especially on spa typing, is very limited. The present study showed the predominance of t003, the detection of specific types in specific hospital wards during a short time, very suggestive of an epidemic, and the first detection in Greece of additional rare spa types.

In conclusion, although the MRSA strains circulating in Greece are similar to those circulating in Europe, there are some differences in their distribution, which have to be taken into consideration in order to understand and evaluate the epidemiology of MRSA worldwide. MRSA remains a public health priority, especially in southern Europe, including Greece. Infection control measures and strict national action plans targeted at reducing the spread of MRSA in healthcare facilities should be implemented.

There is no conflict of interest