Background: Atherosclerosis formation depends on the biomechanical blood flow properties. The temporal variation during the cardiac cycle has been proposed as a decisive atherogenic factor. Patient-specific (complex configuration) of the vessel promotes flow disturbances. The present study analyses the factors simulating pulsatile blood flow in the human arterial system using patient-specific geometry.
Methods: With the aid of numerical techniques, we examine the relation between time-Averaged Wall Shear Stress (AWSS), time-Averaged Wall Shear Stress Vector (AWSSV), Oscillatory Shear Index (OSI) and Relative Residence Time (RRT).
Results: The velocity vector oscillates and at the same time alters its direction in places with low AWSS values. Low AWSS and high OSI values do not always collocate. AWSSV tends to alter its values, compared to AWSS, in regions where AWSS is low. RRT present high values in areas with low AWSS. The inverse proportionality relation between RRT and AWSSV is established.
Conclusions: Regional differences between AWSS magnitude, OSI and RRT, may answer the question as to where atherosclerotic lesions predominately develop and progress at specific aortic regions. This analysis gives information for deeper understanding of the atherosclerosis mechanisms.

The importance of low WSS and high Oscillatory Shear Index (OSI) in atherosclerosis is reported by Chatzizisis et al8. Regional variations of WSS and OSI in the aortic arch was examined by flow sensitive 4D MRI, Frydrychowicz et al9 reporting that biomechanical flow parameters WSS and OSI may help explaining where lesions initiate and substantially develop in the aorta. Other attempts, aim to choose the optimal biomechanical flow parameter for the prediction of plaque location10. The advances of computerized image processing technology and the improved resolution of medical imaging processes, forced research to use more realistic geometries. Thus, “patient-specific” geometry is used in several works; suggestively11-13. A general fully computerized algorithm of 3D geometry reconstruction using CT or MRI images data for biomedical applications was published14.

In the current work a semi-automatic computerized methodology was used to reproduce the 3D geometry of a healthy middle-aged male’s arterial system and a computational model is applied to elucidate the relation between the transient biomechanical flow properties, namely the time-Averaged Wall Shear Stress (AWSS), the time-Averaged Wall Shear Stress Vector (AWSSV), the OSI and the, recently introduced, Relative Residence Time (RRT). 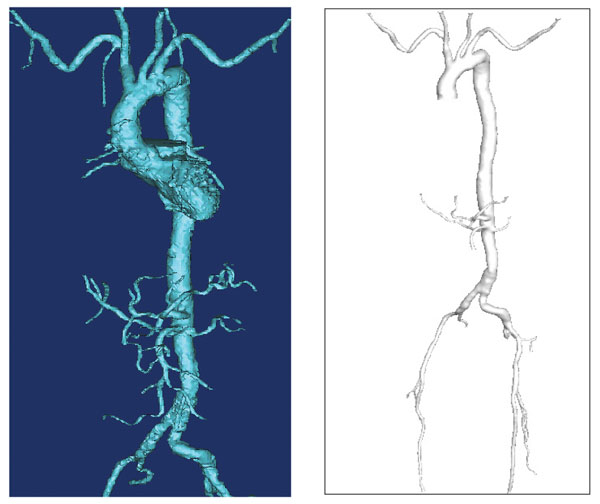 Details can be found in the paper by Soulis et al (2002)2. The blood is treated as non-Newtonian fluid obeying to the power law16.

Figure 3 shows the applied velocity pulsewave at inlet17. The pulse period of this waveform is 800.0 msec. Outflow discharges for the problem were calculated using a slightly modified version of the Murray’s Law18. Mesh independence study was performed using 2.6, 4.7 and 11.1 million cells grids. 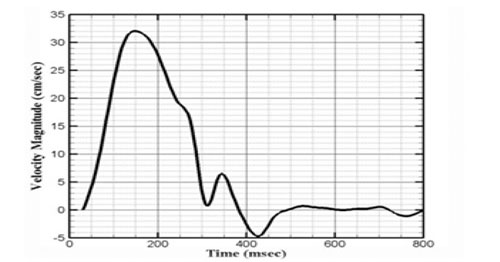 Figure 3: The waveform at the inlet of the patient-specific aortic arch.

μ (kg/m-s) is the blood molecular viscosity, is the strain rate (1/sec), is the instantaneous WSS magnitude and T (sec) is the pulse period. The OSI value can vary from 0, for no-cyclic variation of WSS vector, to 0.5, for 180.0o deflection of WSS direction. Flow pulsatility alone, a) gives rise to flow reversal and b) is insensitive to WSS magnitude. Low WSS may or may not be affected by the flow pulsatility. Under the same inlet waveform conditions, strongly oscillatory flows can exhibit the same OSI as very slow flows. Thus, the OSI misses information regarding the above flow conditions and needs modification in order to capture the atheromatic flow regions i.e. low WSS and high OSI at the same site of the arterial system. To overcome the above difficulties the Relative Residence Time (RRT) is introduced19 as, RRT ~ [(1− 2.0xOSI)×AWSS]−1.The proportionality of the above equation is of relative importance since the results are presented as normalized ones. Thus, the OSI modifies the AWSS effects on the RRT at a given region of the endothelium. Henceforth, the RRT parameter includes effects of both OSI and AWSS.

Figure 7: RRT of the patient-specific arterial. 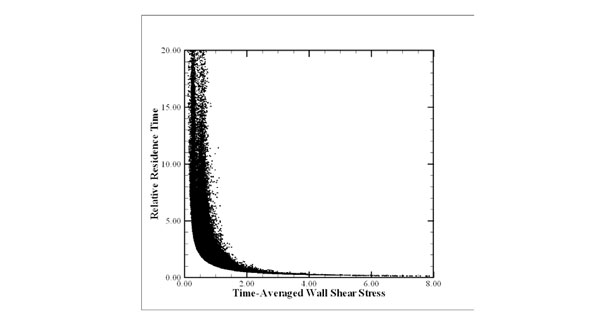 Figure 8: RRT versus AWSS (N/m2) of the patient-specific arterial system.

The purpose of this study was to perform hemodynamic analysis of human arteries (patient-specific), particularly the aorta, and to analyze the relationships between AWSS, AWSSV, OSI and RRT. Numerical results20, among numerous others, suggest that low WSS and high OSI tend to cause wall thickening along the inferior wall of the healthy aorta and the anterior wall of the brachiocephalic artery. In general, low AWSS and high OSI are considered to be susceptible to intimal thickening. It is apparent that as the AWSS lowers the OSI increases. This output agrees with previous works’ results in patient-specific aortic arch simulation of pulsatile blood flow using Large Eddy Simulation21 as well as with the results of blood flow in pulmonary arteries22. OSI has negative correlation with AWSS and AWSSV having a Pearson coefficient values of r= -0.465 (p<0.01), (high AWSS-low OSI).

In order to monitor WSS vector’s oscillating behaviour the OSI and RRT are shown in Figure 9. 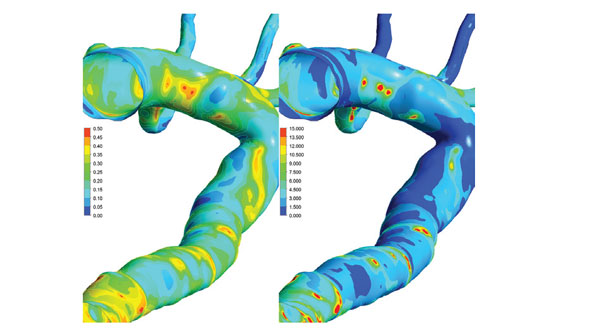 Results indicate that aorta regions of high OSI do not always collocate with regions of low AWSS. As the OSI increases the AWSS and AWSSV attain low values. This relation clearly shows that high oscillation of WSS vector occurs in low AWSSV regions. Pearson coefficient between AWSSV and OSI equals r= -0.606 (p<0.01). On the other hand, the differences between AWSS and AWSSV tend to vary in areas of low AWSS, less than 2.5~3.0 (N/m2). Larger discrepancies between AWSS and AWSSV appear in areas of even lower AWSS, 0.0-2.5 (N/m2), presenting a Pearson correlation coefficient 0.976 (p<0.01). Statistical analysis of data result into an exponential fitting curve, RRT =f(AWSS)= 1.5244/AWSS1.308= α/AWSS β
The R-squared of the above equation is 0.8132 (p<0.01)(α=1.5244 and β=1.308). This statistically significant correlation shows that AWSS strongly affects RRT spatial distribution.

Using numerical techniques we examine the spatial distribution and the relation between the biomechanical flow parameters AWSS, AWSSV, OSI and RRT. Lower AWSS and AWSSV values give rise to higher OSI values. The velocity vector oscillates and at the same time alters its direction in places. Low AWSS and high OSI values do not always collocate. AWSSV gives rise to high oscillation in regions with either low AWSS or high OSI. RRT attains high values in areas where AWSS is low. The inverse proportionality relation between RRT and AWSS is established. Regional differences between WSS magnitude, OSI and RRT, may answer the question as to where atherosclerotic lesions predominately develop and progress at specific aortic regions.