Skip to content
hippokratia.gr > Volume 18 (2014) - Issue 4 > Ovarian carcinosarcoma in a renal transplant recipient. A unique case of a rare tumor

Introduction: De novo malignancies have become one of the leading causes of late mortality after renal transplantation, with their incidence being 2-15 fold higher than in general population. We present herein a unique case of ovarian carcinosarcoma in a renal transplant recipient.

Case report: A 69-year-old female renal transplant recipient presented with progressive distension and vague abdominal pain. Clinical examination revealed a large abdominal mass. Magnetic resonance imaging scan verified the presence of the mass. An exploratory laparotomy was performed, identifying a giant tumor measuring 33 x 22 x 10 cm. Optimal debulking surgery was performed, the postoperative course was uneventful and she was discharged on the 8th postoperative day. The final diagnosis was ovarian carcinosarcoma. The patient received adjuvant chemotherapy and at 6-month follow-up, she was disease-free.

Conclusion: Ovarian Carcinosarcoma is a rare and aggressive neoplasia, comprising 1-2 % of all ovarian tumors. Radical surgical approach, as well as appropriate chemotherapy are the cornerstone of treatment. In the presented case, where immunosuppression is involved, further evaluation should be made as far as immunosuppression dose reduction or switch is concerned.

Carcinosarcoma of the ovaries, also known as mixed malignant müllerian tumor, is a rare and aggressive neoplasia, comprising 1-2 % of all ovarian tumors1-3. It is unique in that it contains both epithelial and sarcomatous malignant elements. It is further classified as homogenous or heterogenous, depending on whether the stromal elements are native to the ovary2. We present herein a unique case of ovarian carcinosarcoma in a renal transplant recipient. 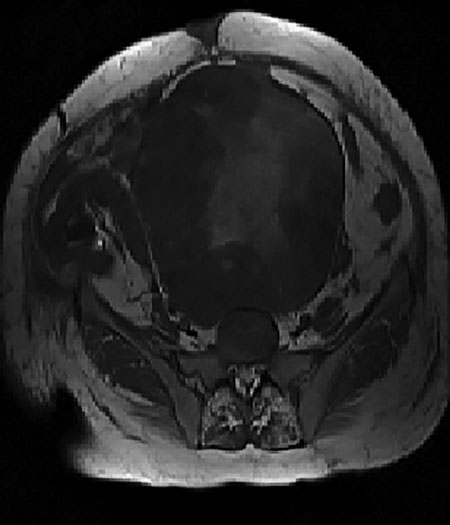 Figure 1: Magnetic resonance imaging of the abdomen showing a mass containing both solid and cystic elements.

Intraoperatively, a giant tumor measuring 33 x 22 x 10 cm was identified, originating from the right ovary, with no macroscopic peritoneal deposits. Optimal debulking surgery was performed (total hysterectomy, bilateral salpingo-oophorectomy and omentectomy). Histologic examination revealed a high-grade epithelial malignancy interspersed with sarcomatous deposits of varying grades, further identified by immunohistochemic staining positive for vimentin, desmin and myogenin as chondrosarcoma, rhabdomyosarcoma and liposarcoma. There were also areas of serous and undifferentiated carcinoma (Figure 2). Uterus and adnexa were infiltrated, but the omentum was tumor-free. Cytological examinations of peritoneal washings were negative. The postoperative course was uneventful and the patient was discharged on the 8th postoperative day. Based on the histological findings, the final diagnosis was heterogenous carcinosarcoma of the ovary (FIGO stage IIA). Adjuvant chemotherapy regimen with cisplatin in combination with ifosfamide had been administered. Immunosuppression regimen was changed with MMF dose reduction and cyclosporine switch to m-TOR inhibitor. At a 6-month follow-up, the patient was disease-free with slightly declined renal function (creatinine 1.8 from 1.43 mg/dl before the change in immunosuppression regimen). 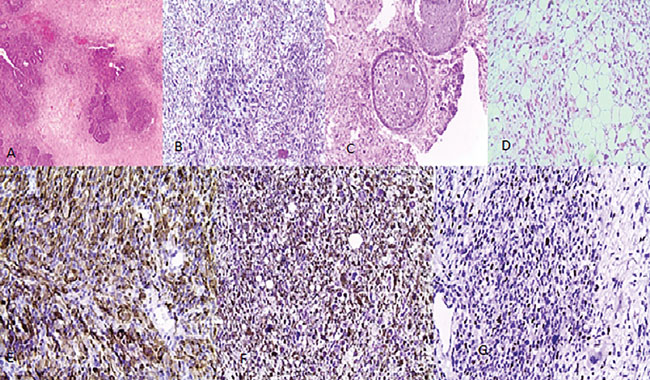 De novo malignancies have become one of the leading causes of late mortality with increasing numbers of long-term survivors after renal transplantation. Due to the rarity of these tumors, there have been no targeted studies in patients with ovarian carcinosarcoma, and most data is derived from trials about uterine sarcomas and ovarian epithelial tumors2.

There are three theories regarding the pathogenesis of carcinosarcoma: 1. the collision theory, in which the two components arise independently and then fuse; 2. the most widely accepted combination theory, where a common stem-cell-precursor gives rise to both cell subtypes; 3. the conversion theory, where the sarcomatous elements arise from the epithelial component2. Disease staging is finalized after surgery and follows the International Federation of Gynaecology and Obstetrics (FIGO) classification for epithelial ovarian tumors2.

As with other ovarian malignancies, the treatment of choice is optimal debulking which has been associated with significantly better overall survival rates and prolonged time till relapse2. Other significant prognostic factors include age, advanced disease stage at presentation, histologic features of the epithelial component (serous has a worse prognosis than non-serous), increased mesenchymal participation (>25% of stromal elements), high vascularity and p53-overexpression2.

Following surgery, most patients undergo adjuvant chemotherapy based on cisplatin/carboplatin6. In cases of solid organ recipients, appropriate immunosuppression changes should be made6. The average survival is less than 2 years, with median disease-free survival at 11 months. To our knowledge, this is the first case of ovarian carcinosarcoma described in a renal transplant recipient.

The authors declare no potential conflicts of interest.