Skip to content
hippokratia.gr > Volume 17 (2013) - Issue 3 > Occlusion of the right coronary artery after blunt thoracic trauma with fatal outcome: A case report and review of the literature

Injury of the heart and large vessels is a common complication after blunt thoracic trauma. Emergency physicians usually have high level of suspicion of myocardial contusion and rupture of the aorta after severe chest injury. Injury of the heart vessels is not a common complication of thoracic trauma. Especially, occlusion of the right coronary artery is rare and can be misdiagnosed.

A 58-year-old male (weight 92 kg, height 1.72 m, BMI 31.0) was transferred to the emergency department of a peripheral hospital for immediate treatment after a serious car accident (co-driver, head to head collision). After a thorough clinical examination and a complete set of laboratory and imaging tests, it was concluded that the patient had sustained a severe blunt thoracic trauma with fracture of the sternum and the 4th, 6th and 9th ribs and absence of pneumothorax and hemothorax. Moreover an acute inferior and lateral myocardial infarction was diagnosed (Figure 1). The Injury Severity Score (ISS) of the patient was 16. According to his medical history, the patient was under medication for mild, well-controlled hypertension and had an excellent every day activity. After initial assessment the patient was transported to our hospital for further treatment. 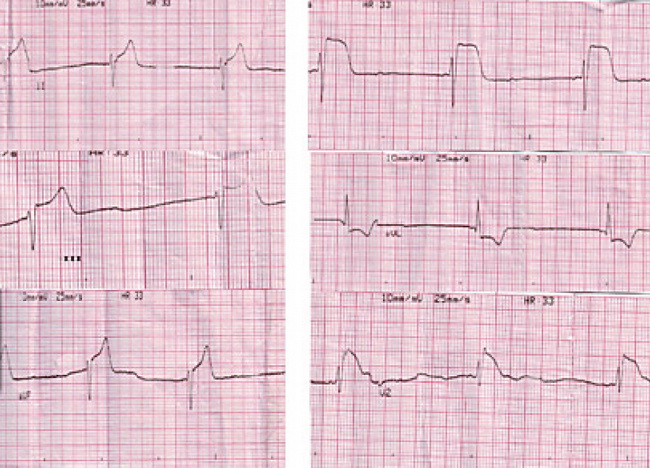 After the patient’s arrival at the emergency department and the primary assessment, he was transferred to the hemodynamic laboratory for coronary angiography. The angiography revealed a complete occlusion of the right coronary artery with intraluminar dissection and the ultrasound a severe malfunction of the right ventricle. These findings were attributed to the blunt thoracic trauma. Finally, angioplasty of the right coronary artery was performed and 2 simple stents were placed. The result was the complete reperfusion of the vessel (Figure 2). 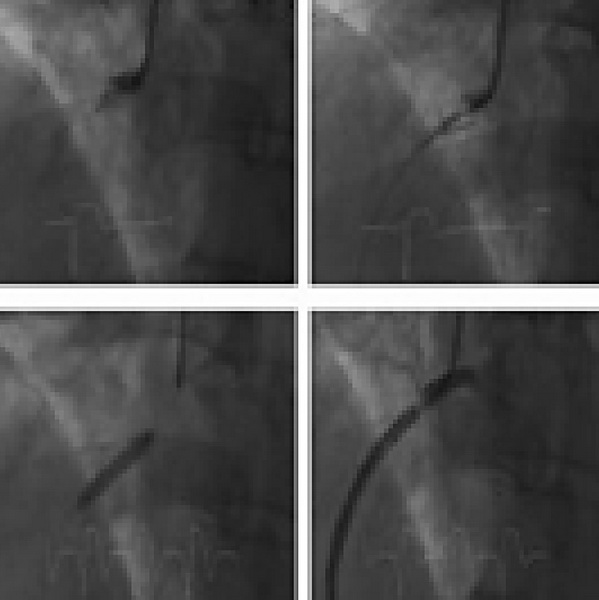 During coronary angiography the consultation of an anesthesiologist was demanded as the patient presented chest pain, mild dyspnea and hypoxemia (SpO2 85-90% with a simple oxygen mask). The clinical examination by the anesthesiologist revealed a flail chest with abnormal chest wall mobility and no signs of pneumothorax or hemothorax. A CPAP mask (PEEP 10cmH2O) was placed with immediate improvement of the oxygenation (SpO2 97-99%). Two days later, an emergency call to the anesthesia department was received because the patient had deteriorated clinically. The clinical evaluation revealed serious respiratory failure with tachypnea (30-40 breaths/min), absence of breathing sounds at the basis of both lungs, use of accessory respiratory muscles, circulatory instability(need for high doses of vasoconstrictive drugs) and slightly decreased level of consciousness (GCS 3-4-6). The patient was intubated, a thoracic tube was placed at the right side of the chest due to pleural effusion and the patient was transferred to a general ICU with the diagnosis of systemic inflammatory response syndrome (SIRS) and multi-organ dysfunction syndrome (MODS). The patient had many episodes of arrhythmias with hemodynamic instability and finally died after 19 days in the ICU due to multi-organ failure.

Clinically significant cardiac injury after severe blunt thoracic trauma has a mortality rate of 5-15%1. The most frequent cardiac complications are myocardial contusion, arrhythmias, rupture of the cardiac chambers and the aorta, malfunction of the valves and pericardial effusion with or without tamponade2,3. There are reports of ventricular fibrillation and sudden death after direct strike of the precordium described by the latin term “commodio cordis”3. These complications depend on the mechanism and the energy of the trauma. The heart can be compressed against the sternum or between the sternum and the spinal cord while the forces that are applied to the heart by the sudden deceleration or the sudden increase of intra-thoracic and intra-aortic pressure also contribute to cardiac injury3,4.

Injury of the coronary vessels is an infrequent cardiac complication after blunt thoracic trauma3,4 with a mortality rate of about 2%2,5 but with a high morbidity. The most usual type of injury is the rupture of the coronary artery. Acute myocardial infarction is a very rare post-traumatic complication6. The mechanism of infarction after blunt thoracic trauma is not well defined but includes thrombosis of the vessel, focal spasm, embolism and intimal tear of the artery wall2,4,5. Other possible mechanisms include external compression of the vessel by direct blow or epicardial hematoma, occlusive dissection and hemorrhage of an atheromatous plaque1. The occlusion of the coronary artery can happen immediately or after some hours5. The most commonly affected vessel is the LAD(71,4%)2,7,8, probably because of its anatomic position at the posterior cardiac wall which makes it vulnerable to forces on the sternum and the frontal chest1. The next most commonly affected vessels are the right coronary artery(19%), the left main(6%) and the left circumflex artery (3%)9.

The most usual clinical finding is precordial pain which can also be generated by trauma of the sternum or the ribs. This makes the diagnosis of myocardial infarction difficult and probably time-consuming2. Also myocardial infarction must be differentiated from cardiac contusion which requires different management1. The ECG is the most useful noninvasive diagnostic tool. ECG changes occur in 63% of the patients with blunt thoracic trauma but only 2% of them have classical infarction ECG findings10. The diagnostic criteria for acute myocardial infarction after blunt thoracic trauma are: i) acute chest pain with ECG findings (ST changes, arrhythmias, LBBB), hemodynamic instability or wall motion disorders at the ultrasound examination, ii) CT scan which excludes rupture of the aorta or the esophagus, iii) increased CK-MB and troponine levels. If a trauma patient fulfills these criteria a coronary angiography must follow2,3.

There are different therapeutic approaches for treating acute myocardial infarction after blunt thoracic trauma11. Conservative treatment with inotropes has been applied but with poor results. There are a lot of patients with cardiac complications and reduced ejection fraction after conservative treatment12. Thrombolysis has also been applied but is generally contraindicated due to the many injuries that these patients usually have and the possible catastrophic hemorrhage that may occur to the coronary vessels13. Percutaneous angioplasty with or without stent placement is the most usual therapeutic choice and has very good results in terms of vessel revascularization and reversal of ST segment disorders2,11,14. In cases of severe bleeding, coronary bypass is indicated2. Surgery without cardiopulmonary bypass (off pump coronary artery bypass or OPCAB) is preferred15. The fact that OPCAB affects the coagulation mechanism to a lesser degree than classic surgery with cardiopulmonary bypass is beneficial for patients who have also sustained head trauma or other injuries with severe bleeding. Finally OPCAB reduces the risk of organ dysfunction and prevents the effects of cardioplegia to the injured and ischemic myocardium11. The result of the treatment varies. There are reports of cases with complete healing of an occluded coronary vessel without any further complications16 or with the presence of some degree of residual stenosis17. There are also cases of angina pectoris after revascularization of a coronary vessel following chest trauma6,18, development of coronary aneurysm19 and stenosis of the vessel after angioplasty20.

We report a case of acute myocardial infarction as a result of a severe blunt chest trauma with fracture of the sternum and ribs and absence of pneumo- and hemo-thorax. The infarction was caused by occlusion of the right coronary artery which is a very rare chest trauma complication as mentioned above. The patient had a free cardiological history and the only prognostic factor for coronary disease was the hypertension which was well controlled with simple medication. The absence of any atheromatic findings in the left coronary artery during angiography also suggests that the trauma was the most obvious cause of the infarction. The patient was firstly hospitalized at the coronary unit, where the personnel didn’t have any experience in treating multi-trauma patients. Only after significant deterioration the patient was transferred to a general ICU with symptoms of initiating SIRS caused by the trauma. Although the death of the patient was the result of multi-organ failure, we believe that the circulatory system function was seriously aggravated by the ischemia caused by the infarction and the severe dysfunction of the right ventricle. Finally we speculate that the patient would have been treated more thoroughly if he had been admitted to the general ICU from the beginning.