Background/aim: Compression of the common bile duct by a hydatid cyst located at the head of the pancreas is one of the quite rare causes of obstructive jaundice in childhood.
Case Report: We report a 9-year-old child with obstructive jaundice caused by compression of the intrapancreatic portion of the bile duct by a hydatid cyst located at the pancreatic head. Furthermore, we considered that this is a reportable case in aspect of childhood development. The patient was treated successfully by surgical procedure and albendazole chemoprophylaxis. The postoperative course was uneventful.
Conclusion: In endemic areas, hydatid cysts should be considered among the differential diagnosis in cystic lesions of any organ including the pancreas.

Hydatid tapeworms initially develop not only in sheep but also cattle, kangaroos and pigs. This disease is prevalent in Mediterranean countries. The annual incidence of hydatid disease has been reported to be 18 to 20 cases per 100.000 inhabitants in Turkey. It is often manifested by a slowly growing cystic mass and most often involves the liver and the lungs1. A hydatid cyst involving the pancreas is extremely rare. The incidence of primary hydatid disease of the pancreas is less than 1%2,3. Furthermore, there are only few primary pediatric cases in the English literature4. Obstructive jaundice caused by compression of the common bile duct from a hydatid cyst located in the head of the pancreas is even more rare in childhood5.

A 9-year-old female patient was admitted with a 15 days history of painless progressive jaundice. On physical examination, she was examed with 80 beat/min of pulse rate, 80/100 mmHg of blood pressure, 36.6° C of body temperature and appeared with severe jaundiced skin color and scratch marks in whole her body. Her liver was not palpable and hemoglobin level was 12.6 g/dL, leucocyte count 15.8 x 103/L without any notable eosinophil count. Liver function tests suggested obstructive jaundice (total bilirubin: 30 mg/dL, conjugated bilurubin: 15 mg/dl, aspartate aminotransferase: 137 IU/L, alanine aminotransferase: 109 IU/L, alkaline phosphatase: 408 IU/L). Other serum parameters, such as, tumor markers or serum cyst hydatid haemagglutination were within normal limits. Physical examination revealed severe jaundiced skin with scratch marks all through the body. Abdominal ultrasonography (US) showed a cystic lesion of 44 x 51 mm in size located in the head of the pancreas and dilated intrahepatic and common bile duct (1.3 cm) with distended gallbladder (maximal transverse diameter 4.2 cm). No echogenic structures were seen in the biliary tree. Magnetic resonance cholangiopancreatography (MRCP) showed as cystic lesion in pancreatic head and also showed dilated proximal and narrowed distal choledochal bile ducts that were caused by compression of the cyst (Figure 1). Cystic neoplasm or pseudocyst of pancreas and choledocal cyst was suspected preoperatively. Explorative midline laparotomy was performed and a partially calcified approximately 4 x 5 cm cystic mass in the head of the pancreas was found. Cyst wall was very thick and hard. The cyst was not adjacent to other abdominal structures (Figure 2). A small part of the cyst wall was removed and sent for pathological examination. The germinative membrane and cystic content were evacuated through this window. The presence of germinal layer suggested an operative diagnosis as hydatid disease of the pancreas. The diagnosis was confirmed by histological findings afterwards, as well. Dilated proximal choledochal bile duct was shown but there was no communication between the cyst and the pancreatic and bile ducts. Therefore, major surgical procedures such as pancreatectomy or Whipple operation was not considered. Omental tissue was packed into the evacuated cyst. The postoperative course was uneventful. Albendazole 10 mg/kg was used for three months in 15 days intervals. Serum bilirubin levels, amylase and liver function tests were within normal limits in the 7th postoperative day and 3rd month. 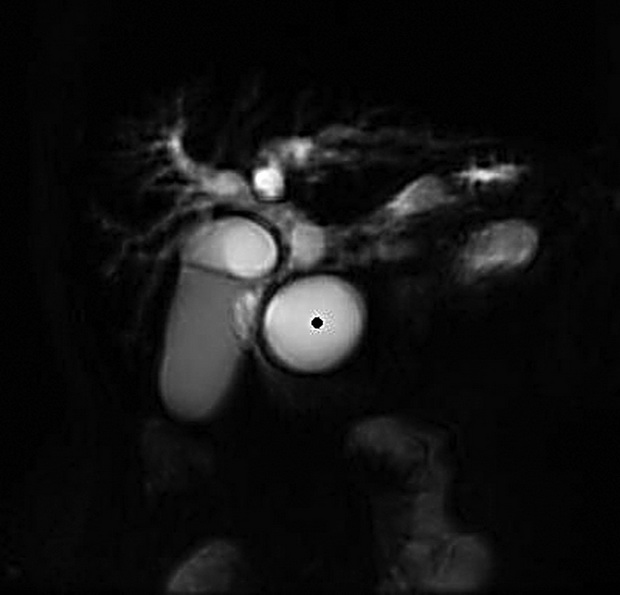 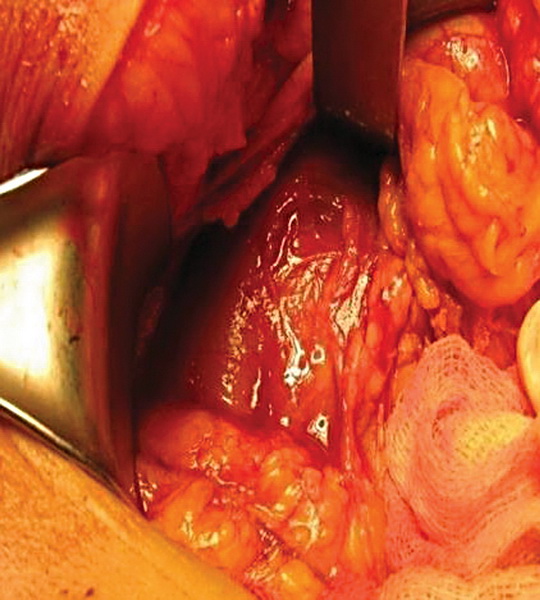 Most of the hydatid cysts are located within the liver. The reported incidence of hydatid cyst of pancreas is 0.25%. Possible sources of infestation include hematogenous dissemination, local spread via pancreaticobiliary ducts, and peripancreatic lymphatic invasion.Clinical presentation is the result of pressure generated by the cyst on adjacent structures, and depends heavily on the size and anatomic location of the cyst. The cyst is localized in the pancreatic head in 50% of cases, and therefore patients may present jaundice if the cyst is located in the pancreatic head2,6,7.

Complete excision of the cyst, if possible, is the radical treatment of hydatid disease of the pancreas. However, when the cyst is located close to vital anatomic structures, as in our patient, removal of the cyst contents with or without partial cystectomy should be the preferred treatment2,4,7. The Whipple resection, or marsupialization, has been done in some cases of hydatid cyst of the pancreatic head. Also, percutaneous drainage of the cyst using hypertonic saline lavage has been used successfully in the management of a pancreatic hydatid cyst in one series7.

In conclusion, hydatid cyst of the pancreas is an extremely rare condition. However, it should be considered as a differential diagnosis in cystic lesions of the pancreas presenting with obstructive jaundice, especially in endemic areas. Although radiological examinations may help clinicians in diagnosing cystic masses in the pancreas, certain diagnosis and treatment are best established during laparotomy. If the cyst is not related to the pancreatic duct, cystectomy and drainage might be the procedure of choice in order to release the pressure. However, if there is a connection with the duct, a stent should also be inserted into the duct during surgery or cystogastrostomy might be the procedure of choice.