Background: Proteus Syndrome (PS) is a rare hamartoneoplastic disorder consisting of a disproportionate and asymmetric overgrowth of body parts, leading to severe body and face disfigurement. Individuals with PS frequently need to undergo a number of surgical procedures including Otolaryngology interventions. Their peculiar anatomy turns even the most straightforward intervention to a challenging one.

Juvenile nasopharyngeal angiofibroma (JNA) is a benign, slowly growing, locally aggressive vasoformative neoplasm. It is a relatively rare and sporadic tumor and represents approximately 0.5 % of all head and neck tumors1.

Proteus syndrome is a complex hamartoneoplastic disorder consisting of a disproportionate and asymmetric overgrowth of body parts, malformations of venous and lymphatic capillaries, and abnormal growth regulation of the adipose tissue2. Cohen and Heyden first described it in 19793, but only in 1983 Rudolf Wiedemann, named it Proteus syndrome (PS) after the Greek sea-God, who could assume many forms to escape capture4. Individuals with PS that are represented by the literature hero “The Elephant Man”, frequently need to undergo several surgical procedures including Otolaryngology interventions.

The syndrome affects the head and neck area with asymmetrical overgrowth of the cranium or the facial skeleton, disfiguration of the auricle and the nose and alterations of the anatomy of internal structures such as the nasal and paranasal cavities, the ear, and the larynx. Surprisingly, patients even though severely disfigured, often remain functional for many years and can breathe and swallow normally retaining an acceptable quality of life5.

The present case, a 31-year-old male, represents the only living patient with PS in Greece, who was referred to our Department with one month history of nasal obstruction and epistaxis during the preceding two weeks. His past medical history was significant for PS. He appeared to be normal at birth but gradually developed the characteristic abnormalities of the syndrome (Figure 1). He was diagnosed with PS at the age of 18 months. He had already been submitted to several surgical procedures before the age of 16 including amputation of the right leg, tonsillectomy, removal of a testicle epithelioma, and mastoidectomy with drainage of a brain abscess. 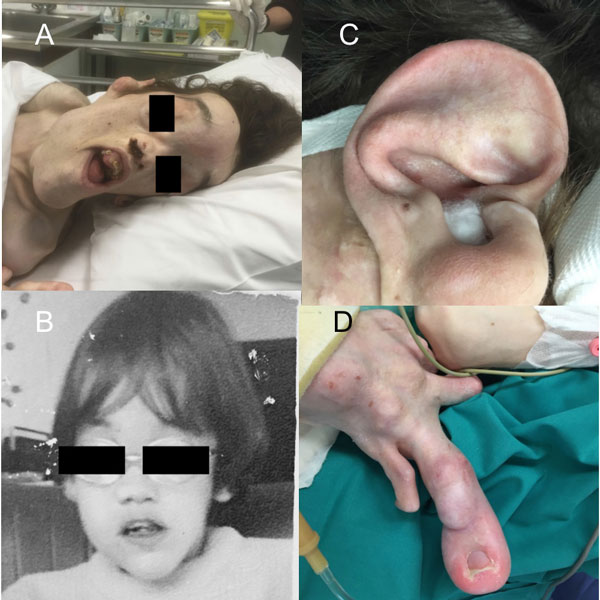 During his clinical examination, a mass was found to obstruct the right nasal cavity completely, protruding into the nasopharynx. Computed tomography and magnetic resonance imaging scans showed the severely altered anatomy, but the mass was noted to occupy the right nasal cavity with benign radiographic characteristics (Figure 2). According to his mother, his nasal obstruction was severely affecting his normal sleep and swallowing functions. 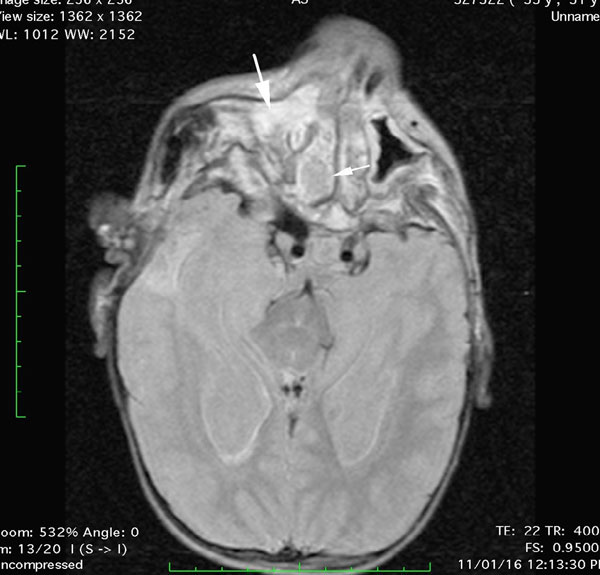 Figure 2: T2-weighted magnetic resonance axial head image showing a mass occupying the right nasopharynx (short arrow) and the right maxillary sinus (long arrow) occupied by retention of mucus. The sinus is smaller than the contralateral and nasal passages are rotated to the left

It was decided to treat the patient surgically and, after written informed consent, he underwent surgery under general anesthesia, administered after fiberoptic-guided intubation. The mass was removed under endoscopic guidance using cold instruments. Anatomical landmarks were severely altered. The inferior and middle turbinates were recognized, but additional surgical steps such as a middle meatal antrostomy or an ethmoidectomy were avoided. An attachment of the polypoid mass was noted to the posterior end of the middle turbinate, and was transected and coagulated with bipolar coagulation. Packing was placed and the patient recovered uneventfully. Histology of the specimen demonstrated irregular fibrous stroma with large and smaller vessels, typical of an angiofibroma (Figure 3). 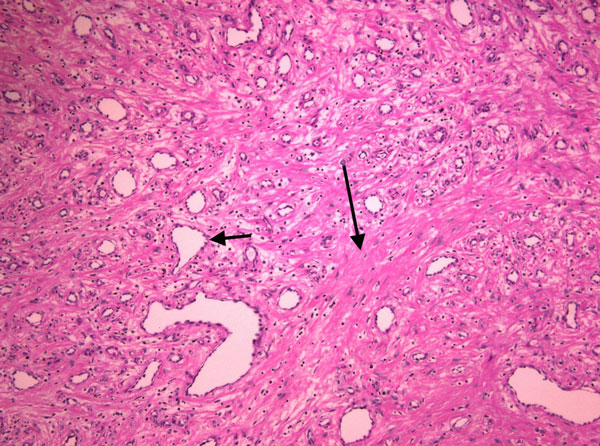 During the three postoperative days, recurrent episodes of self-limited epistaxis occurred. The packing was removed on the fourth day. The patient had to be transfused with three units of blood, due to a total drop of 4 g/dl of his hemoglobin. He was discharged on the 10th postoperative day and the histologic examination revealed the tumor to be JNA. Two years later, his mother reports that he is free of symptoms, but no nasal examination has been performed to exclude a possible recurrence or residual disease.

This is the first reported case of JNA in a patient with PS. JNA is the most common benign neoplasm of the nasopharynx, seen almost exclusively in prepubescent males6. It has rarely been reported in older adults or females such as a rare case of nasopharyngeal angiofibroma in an elderly female7.

Removal of JNA is challenging and may be performed endoscopically or in combination with open procedures. Since these tumors are highly vascular with tendency of profuse intraoperative bleeding, preoperative embolization is recommended6. Diagnosis is based on the radiologic appearance of the mass and its location; it usually originates from the sphenopalatine foramen. A biopsy is not recommended due to its vascularity. Radiologic diagnosis in the reported case was inconclusive regarding the site of origin of the tumor, due to alterations of the anatomy. The age of the patient was not suggestive of JNA. Nevertheless, the delayed seek for medical advice due to the comorbidities of his PS could be an explanation. A preoperative angiography/ embolization was thus not performed.

PS has a global incidence estimated to be less than one in a million. Recently researchers have identified that the cause of PS is a somatic mosaic mutation of the AKT1 oncogene kinase8, an enzyme involved in cell proliferation. Vascular malformations are prevalent in these patients9, but JNA is not regarded as such. Otolaryngological surgical interventions are frequently needed, and these procedures are challenging due to the severely altered anatomy. They are predominately performed to improve the patient’s quality of life since the prognosis is unpredictable.

Given the histology of the tumor, we regard that with the performed procedure, a possibility of residual disease exists. Nevertheless, no radiologic follow-up has been performed, and the patient remains free of symptoms.

The authors have no conflict of interest or financial disclosures.