Background: The identification by cardiac magnetic resonance of myocardial crypts in the left ventricle (LV) of individuals carrying hypertrophic cardiomyopathy causative mutations, but without overt hypertrophy, has been proposed as an early sign of the disease. Myocardial crypts are usually identified in the offsprings of patients with a complete penetrance of the disease.

Case description: We present a case of familial hypertrophic cardiomyopathy displaying an unusual pattern of disease distribution; the 14-year-old child was affected, demonstrating a typical LV asymmetrical hypertrophy, his grandfather, and the 2 brothers of his mother were also affected, but the 41-year-old mother was unaffected (no hypertrophy) displaying 3 myocardial crypts in inferior LV wall, suggesting a preclinical involvement.

Conclusion: The findings underscore the diverse clinical spectrum of the disease, even in a single family and also the need to revise the diagnostic criteria of hypertrophic cardiomyopathy.

A typical case of HCM, i.e. unexplained LV hypertrophy, was diagnosed by echocardiography and CMR through 3 generations in 4 patients [case-index patient I (I), II (II), II (III), and III (III)] (Figure 1). Case-index patient I (I) was deceased when the other family members were evaluated and was diagnosed by history. Case-index patients II (I), III (I), III (II), and III (IV) did not proceed for clinical evaluation. Case-index patient II (IV) [(the mother of case-index patient III (III)] had a normal LV wall thickness,but 3 myocardial crypts were located in LV inferior wall (Figure 2), suggesting a preclinical sign of hypertrophic cardiomyopathy. Accordingly, the pulsed wave tissue Doppler of the lateral wall of the mother displayed a lateral Sa <13 cm/s and a lateral Ea <14 cm/s, measurements, that also constitute a preclinical sign of HCM, differentiating a mutation positive patient with high sensitivity and specificity (Figure 2B). Although genetic analysis was not performed, because it was not available in our laboratory, case index II (IV) patient was considered an obligate carrier of the mutation of HCM. 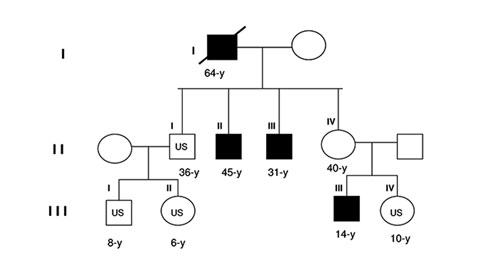 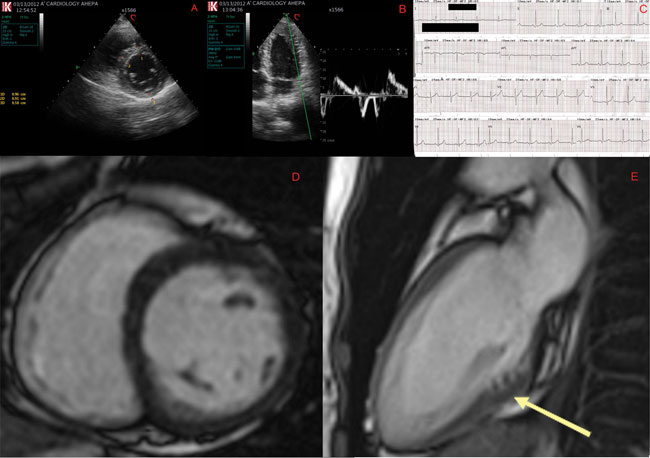 In our case we describe the presence of myocardial crypts in a 41-year-old mother with no hypertrophy, and a typical HCM phenotype in her 14-year old son, in the 2 brothers, and her father. Myocardial crypts are narrow deep blood-filled invaginations occupying at least 50% of myocardial wall, more frequent localized in the septum and the inferior wall, at the sites of right ventricle insertion. The presence of myocardial crypts has been proposed as an early sign of HCM-phenotype in individuals carrying HCM-causing gene mutations, but no hypertrophy1-3, representing probably an abnormal fetal cardiac morphogenesis due to in utero expression of the underlying gene mutation. Myocardial crypts are visualized only by CMR in about two thirds of subjects carrying HCM causative gene mutations without hypertrophy [genotype (+)/phenotype (-) subjects], and in less than 5% of genotype (+) patients with overt hypertrophy, while absent in control subjects3. It should be emphasized that in more than half of the cases the visualization of myocardial crypts precedes the development of ECG abnormalities3. Usually, myocardial crypts are identified in the offsprings of patients with a complete penetrance of the disease. In our case HCM-phenotype (overt hypertrophy) was present in a 14-year-old child (Figure 3) while absent in his 41-year-old mother, in whom myocardial crypts were demonstrated in CMR and who was also considered an obligate carrier of the HCM mutation. Also the pulsed wave tissue Doppler velocities of the lateral wall of the mother suggest another preclinical sign of HCM4. These findings underscore the diverse clinical spectrum of the disease, even in a single family and also the need to revise the criteria of HCM diagnosis. The utility of CMR in evaluating all genotype (+)/phenotype (-) individuals and all first degree relatives in cases when genetic analysis is impractical or unavailable is also supported. 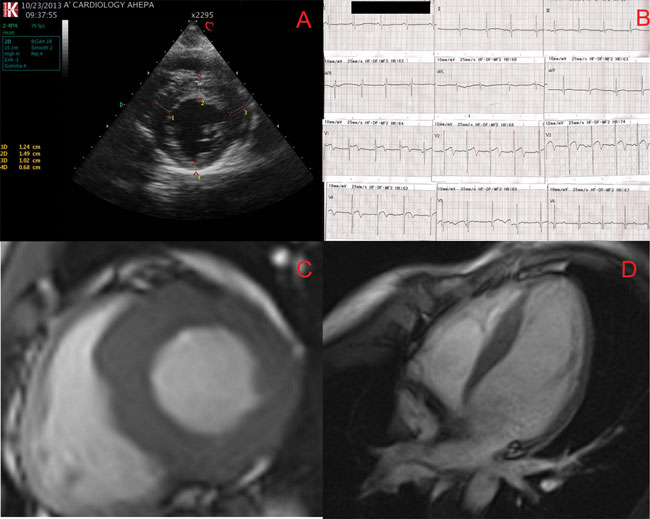