Description of the case: A 27-year-old male, Hepatitis C infected patient, presented with sudden, severe immune thrombocytopenia at the end of a standard 24-week antiviral treatment, as a side effect of pegylated interferon. Platelet count rapidly normalized with Rituximab infusions.

Conclusion: Rituximab could be a valuable treatment option in pegylated interferon related immune thrombocytopenia, when patients are resistant to conventional treatment or when physicians are reluctant to administer corticosteroids.

Thrombocytopenia is a common haematological abnormality diagnosed in patients affected with hepatitis C virus (HCV), and as well as an expected side effect of pegylated interferon (PEG-INF) treatment1,2. Nevertheless, severe immune thrombocytopenia (platelets <25,000/μL) is a rare side effect of PEG-INF2. The pathogenic mechanism possibly involves an interaction betweenplatelets, antigen-presenting cells, T and B cells, evolving after the drug-dependent antibodies are directed against prevalent glycoproteins of the platelets’ surface. This event signals the CD4+ T helper cells activation, and eventually the B-cell differentiation and autoantibody production that opsonize platelets, promoting phagocytosis3,4. Treatment of immune thrombocytopenia associated with PEG-INF therapy can be achieved with the monoclonal antibody Rituximab, that raises platelet counts in patients with immune thrombocytopenia by depleting the CD20-positive auto-reactive antibody-producing B cells5,6.

The patient reported is a 27-year-old male, who was diagnosed with HCV infection, after he was found on routine laboratory evaluation to have elevated aminotransferases. Anti-HCV antibodies in serum were positive and reverse transcriptase polymerase chain reaction (PCR) detected the HCV-RNA. The analysis of HCV-RNA revealed that the patient was infected with genotype 3a. Baseline platelet counts were within the lower normal limits; neutrophil counts, hematocrit, coagulation and other biochemical markers were normal. Liver biopsy showed mild histologic changes of chronic viral hepatitis and absence of significant fibrosis. The patient was treated with PEG-INF (180 μg sc weekly) and ribavirin (800 mg daily) for a total of 24 weeks7. After treatment completion, circulating HCV RNA was undetectable.

During the 24 weeks of therapy the patient developed thrombocytopenia with platelets around 80,000/μL that remained at this level, without any other side effects or autoimmune disorders. At the time the treatment was discontinued, severe thrombocytopenia, as low as 4,000/μL presented, without hemorrhagic manifestations (Figure 1). Secondary causes of thrombocytopenia (lymphoproliferative, autoimmune, thyroid disorders) were excluded by laboratory evaluation and bone marrow examination that was suggestive of peripheral platelets destruction8. An impending immunologic mechanism, as a late onset complication of PEG-INF, was assumed to be responsible. We infused, as first line treatment, high dose immunoglobulins (400 mg/kg) for five consecutive days, with no efficacy. We did not attempt to use corticosteroids. Then, the anti-CD20 monoclonal antibody Rituximab (375 mg/m2 weekly for 4 weeks), was administered6. After Rituximab infusion, the platelet count gradually normalized (Figure 1). The patient responded completely, did not present any other complications as result of treatment or Hepatitis C, and he was not re-admitted to the hospital. 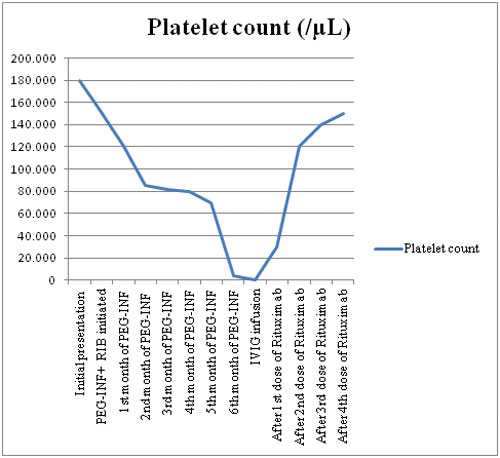 Figure 1: Changes in platelets values during antiviral therapy and therapeutic manipulations. Severe thrombocytopenia (platelets as low as 4,000/μL) presented at the time that the pegylated interferon plus ribavirin (PEG-INF+RIB) treatment was completed. At this point the patient had undetectable HCV-RNA. Intravenous immunoglobulins administered initially followed by Rituximab weekly infusions.

We are aware of four case reports that described immune thrombocytopenia at the end of antiviral therapy for HCV (either with common IFN-α or PEG-INF) or during antiviral therapy for more than six months5,10-12. Also one case report described immune thrombocytopenia after 6 months from the PEG-INF discontinuation13. Rituximab was used and adequately restored platelet count only in one case5, whereas in all other cases corticosteroids were administered10-13.

Although Rituximab is considered to be a more intense immunosuppressive regimen compared to steroids, with no objective difference in timing of platelets response and the potential harmful outcome to induce virus replication14, we did not use corticosteroids as the indicated first line treatment8. Despite the high initial therapeutic efficacy, steroids achieve durable response in only 20-30%, often requiring ongoing or repeated administrations to maintain platelet counts, compared up to 50-70% therapeutic activity of Rituximab6,8. Our patient was debilitated from his previous treatment and could not tolerate a further long course of additional modalities. We also took into account that B-lymphocyte recovery occurs in 6–8 months after Rituximab infusion15 and liver-related effects of rituximab-containing regimens on HCV-positive CD20-positive B-cell Lymphoma patients, in most cases are not followed by major clinical events16.

In conclusion, this report underlines the significant response to anti-CD20 monoclonal antibody Rituximab, of a patient with severe PEG-INF related immune thrombocytopenia. In this context, physicians could be aware of anti-CD20 therapy as an alternative and efficacious option. From newer concepts, anti-CD20 treatment works by normalizing faulty T-cell responses, maintaining autoreactive T-cell activation and actually by restoring the defective tolerance-inducing to self antigens regulatory T cells that are essential in preventing autoimmunity3,4,17.

Authors report no conflict of interest.