Fibroadenomas are the most common benign solid tumors of the breast, typically presenting in younger women. Phyllodes tumors are less common, with clinical and imaging features similar to fibroadenomas and biologic behavior ranging from benign to malignant. A rare case of a mixed tumor with histological characteristics of both fibroadenoma and phyllodes tumor is presented.

A 26-year-old woman, G1, P1, presented with a palpable mass in the left breast. Clinical examination confirmed the presence of a palpable, mobile tumor with well-defined borders in the lower-outer quadrant of the left breast. Ultrasound showed a well-circumscribed, highly vascularized hypoechoic lesion, measuring 28.2 x 18.8 x 24.3 mm (Figure 1A and 1B). Following 14G-core needle biopsy under ultrasonographic guidance, histology showed a pericanalicular fibroadenoma. Given the increased vascularization of the tumor and the patient’s concerns in case of future pregnancy, total excision followed. Definitive histological examination showed a fibroepithelial lesion with mixed histology, containing large cystic spaces with leaf-like stroma protrusions covered by epithelium, and areas with the typical appearance of pericanalicular fibroadenoma (Figure 1C and 1D). Two years later, the patient had an uneventful pregnancy with normal vaginal delivery. Seven years later she is still in good health without any signs of recurrence. 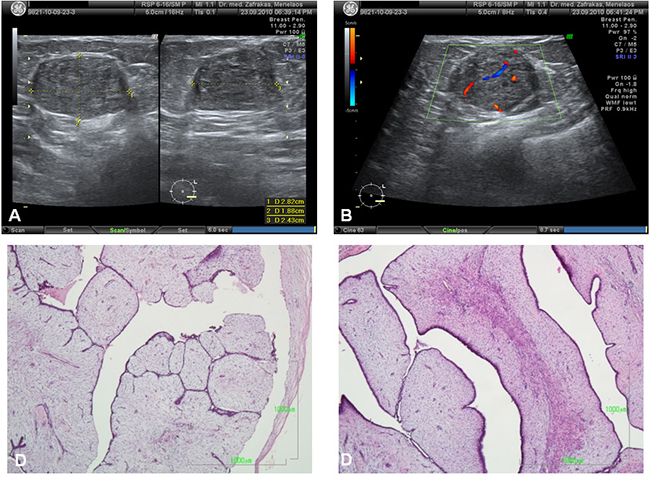 To the best of our knowledge, only three similar cases have been previously reported. In one case the tumor was completely removed, and mixed histology of borderline phyllodes, benign phyllodes, and fibroadenoma was found1. In the other two cases the tumor was not removed after core needle biopsy and later the patients were diagnosed with malignant phyllodes tumor2,3.

The present case highlights the limitations of core needle biopsy applied for preoperative diagnosis of fibroepithelial breast lesions presenting clinically and ultrasonographically as fibroadenomas. Although the sensitivity, specificity, and positive predictive value of core needle biopsy exceed those of imaging studies for tumors appearing as fibroadenomas, still its diagnostic accuracy is less than the ideal 100 %. Given the risk of malignancy in phyllodes tumors, breast specialists should be aware that core needle biopsy does not warrant a 100 % diagnostic accuracy for solid tumors presenting as fibroadenomas, especially if equivocal features such as increased vascularization on Doppler ultrasound are present.