Objectives: The aim of this study was to investigate the relationship between the expression of microRNA (miRNA)-183 and Ca2+-activated K+ channels β1 subunit (BKCaβ1) in the lung tissues of patients with chronic obstructive pulmonary disease (COPD).

Chronic obstructive pulmonary disease (COPD) is a common clinical respiratory disease characterized by airflow limitation1. Numerous recent studies suggested that COPD is a chronic inflammatory disease that involves a variety of inflammatory mediators during the whole process of disease development2. The local immune response mediated by the inflammatory mediators could damage bronchial pulmonary vascular, alveolar and other structures and cause chronic inflammation of the lungs, emphysema, fibrosis and other irreversible damages. Finally, COPD patients might develop arterial hypertension and pulmonary hypertension3-5. The large conductance, Ca2+-activated K+ channels (BKCa), a type of calcium-activated potassium channels characterized by large conductance, is widely expressed in various tissues6. BKCa β1 subunit (BKCaβ1) is the major functional group for immediate regulation of BKCa channel activity, which affects systolic and diastolic function of smooth muscle7 and further regulates the tension of the elastic bronchus and blood pressure. Because of the high prevalence of bronchial hyper-responsiveness and arterial hypertension in COPD patients, the expression pattern of BKCaβ1 in COPD lung tissue might be abnormal. In this study, we examined the expression level of BKCaβ1-related microRNA (miRNA) in peripheral blood of COPD patients and tested whether this has roles in regulating BKCaβ1 expression level.

After sodium dodecyl sulfate polyacrylamide gel electrophoresis and polyvinylidene difluoride membrane transfer, the membrane was incubated with appropriate concentration of primary antibodies (BKCaβ1, 1:500; glyceraldehyde-3-phosphate dehydrogenase, 1: 5000) overnight at 4 oC. The membrane was washed with phosphate buffered saline with Tween® 20 for 3 times of 15 min. Horseradish peroxidase-conjugated secondary antibodies (goat anti-mouse, 1:5000; goat anti-rabbit, 1:1000) were added for incubation for 1 h at room temperature. After 3 times of 15 min washing, electrochemiluminescence was used for imaging.

The transfection of human VSMCs was mediated by liposome. One day before transfection, cells in logarithmic growth phase was seeded in 24-well plates, with a density of 2 × 105 per well. The 24 wells were divided into control group (pGCMV), negative control (NC) group (EGFP), and miRNA183-VSMC group (miR-183). Transfection was performed when the cells reached 80% confluence on the next day. Plasmid (2 μg) and lipofectamine 2000 (1 μl) were individually added into 2 tubes of 50 μl medium containing Opti–MEM I medium. After 5 min standing, the mixtures in the two tubes were combined and left for standing for another 20 min. The mixture was then added to the wells for incubation for 6 h before high-glucose Dulbecco’s Modified Eagle’s Medium containing10% fetal bovine serum was added. At 48 h after transfection, the transfection efficiency was estimated by observing the green fluorescent protein (GFP) signal under an inverted fluorescence microscope.

Using online prediction websites, such as PicStar, miRanda and Targetscan, a list of miRNAs that potentially regulate BKCaβ1 was generated, including miR-183, miR-200b, and miR-200c, which were the top three candidates based on mirSVR score ranking, a new machine learning method for ranking microRNA target sites by a down-regulation score (Table 2).

All results were analyzed using the Statistical Package for the Social Sciences (SPSS) version 11.0 (SPSS Inc., Chicago, Illinois, USA). The data were presented as means ± standard deviation (SD). To compare the expression levels of miRNA183 and BKCaβ1 in lung tissues and VSMCs, t-test was performed. A p < 0.05 was considered statistically significant.

To determine the levels of BKCaβ1 mRNA in lung tissues of COPD group and control group, qPCR was used. The results showed that BKCaβ1 expression level in COPD lung tissue was significantly lower than that in the control group (p < 0.05). In addition, the expression of BKCaβ1 was related with COPD severity, with a reduction of 83% in severe COPD, and a reduction of 55% in moderate COPD but no reduction in mild COPD (p > 0.05) (Figure 1). 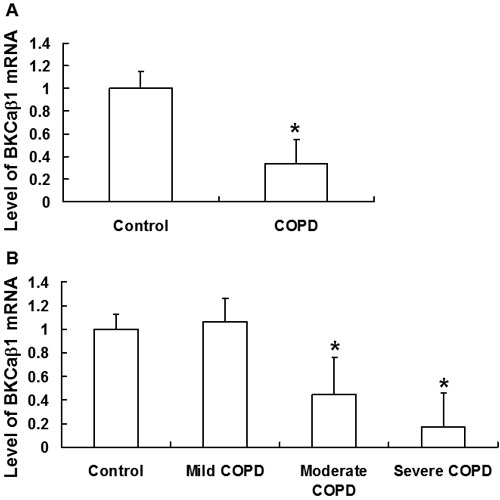 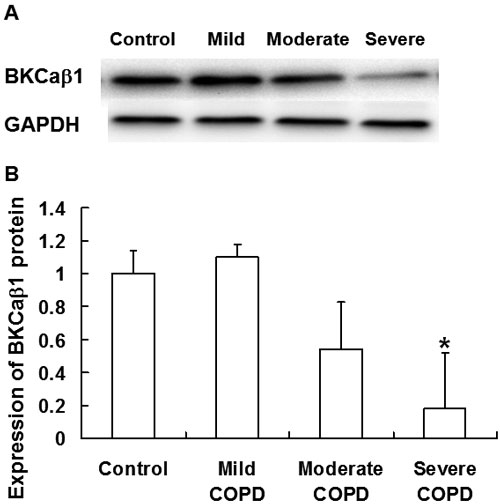 The levels of miR-183, miR-200b and miR-200c in peripheral blood of patients with COPD were higher than those of patients in the control group, with the expression of miR-183 being the highest

To measure the levels of miR-183, miR-200b and miR-200c in peripheral blood of patients with COPD, qPCR was employed. The results showed that all three candidate miRNAs had significantly increased expression levels in COPD patients compared to the control. Among them, the level of miR-183 was the highest (Figure 3). These data indicated that the levels of miR-183, miR200b and miR200c in peripheral blood of patients with COPD were higher than those of patients in the control group, with the expression of miR-183 being the highest.

To study the effect of miR-183 on the expression of BKCaβ1, VSMCs were transfected with constructed pGCMV/EGFP/miR-183 plasmid by liposome for qPCR and Western blotting analyses. At 48 h after transfection, strong GFP signals were widely distributed in VSMCs, with the transfection efficiency being above 60% as indicated by GFP-positive cell ratio (Figure 4A and 4B). qPCR results showed that the level of miR-183 at 48 h after transfection was increased by 12.46 ± 0.89 fold compared with control (p < 0.05) (Figure 4C). However, the level of BKCaβ1 was not distinct from the control (p > 0.05) (Figure 4D). By contrast, Western blotting data showed that BKCaβ1 protein expression in VSMCs transfected with miR-183 was significantly decreased by 59% compared with those of controls (Figure 5). These data suggested that miR-183 reduced BKCaβ1 protein expression without altering the level of BKCaβ1 mRNA. 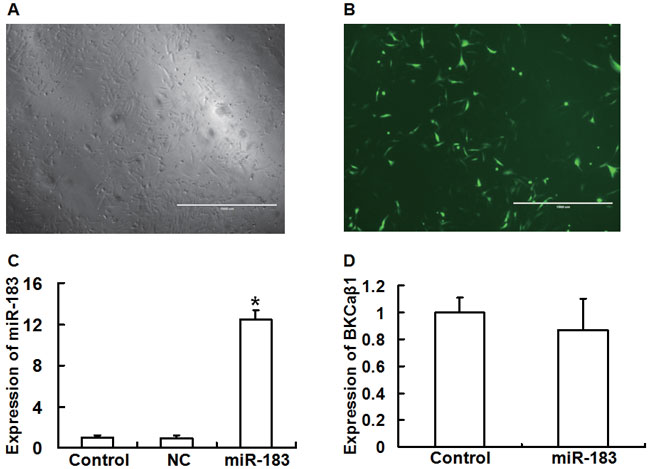 COPD patients could develop peribronchial fibrosis, severe damage in lung parenchyma, and severe respiratory decompensation. Studies have shown that serum C-reactive protein, endothelin-1, and brain natriuretic peptide levels in patients with COPD were positively correlated with the severity of COPD8-10. Besides, hypoxia-inducible factor-1α, vascular endothelial growth factor and surfactant protein D shows abnormal expression levels in COPD lungs11-13, which is related to hyper-responsiveness and remodeling of the airway. Further studies discovered that abnormal function of T-regulatory cells and macrophages in COPD patients might be closely related to the damage in lung tissues. BKCaβ1 can be involved in the regulation of various cellular functions. BKCaβ1 coupling with Ca2+ can regulate smooth muscle systolic function, activate hormone secretion, and promote synthesis and release of neurotransmitters in neuron14. In the development of COPD, lung inflammation leads to repeated dilatation of the trachea and the pulmonary vascular pressure is increased, but this is not quite clear and not supported by literatures. In fact, trachea dilation would lead to decreased airways resistance15. COPD is mainly a disease of small airways disease. Therefore, we examined the expression level of BKCaβ1 in COPD lung tissues. To study the mechanism of BKCaβ1 expression regulation, we predicted the potential upstream miRNA using bioinformatics. Furthermore, we tested the candidate miRNA expression levels in peripheral blood of COPD patients as well as the potential correlation between miRNA and BKCaβ1 in vitro.

The results showed that compared with the control, mRNA expression of BKCaβ1 was significantly reduced, especially in moderate and severe groups, but not in mild group. Western blotting results indicated the same trend for protein levels. Collectively, the results suggested that the BKCaβ1 expression was closely related to the developmental stage of COPD. We hypothesize that this is mainly due to the remodeling of airway and normal lung tissue damage in moderate and severe COPD patients, which lead to reduced expression of the BKCaβ1. The results predicted by multiple bioinformatics software, such as PicStar, miRanda, and Targetscan, suggested that several miRNAs such as miR-183, miR-200b, miR-200c and miR-429 might be involved in regulating BKCaβ1 expression. We detected increased expression of miR-183, miR-200b, and miR-200c in the peripheral blood of patients with COPD, but found no significant difference between different severities of COPD. Because miR-183 has the largest increase fold, we constructed eukaryotic expression plasmid with mi-R183 and transfected VSMCs in vitro. qPCR results suggested that the eukaryotic cell model of miR-183 overexpression was constructed successfully. Furthermore, BKCaβ1 mRNA was slightly reduced after transfection, without statistical significance. Interestingly, Western blotting results suggested that BKCaβ1 protein level was significantly reduced after transfection. Collectively, the results suggested that miR-183 might inhibit BKCaβ1 protein expression at translational level, but not through promoting the degradation of mRNA. This might be one explanation for the inconsistency between mRNA level and protein level. The BKCaβ1 mRNA and protein expression in lung tissues of COPD patients were both decreased, indicating the existence of other mechanisms that regulate mRNA expression of BKCaβ1. We speculate that it might be due to damages of airway smooth muscle and vascular smooth muscle tissues caused by immunity that down-regulates BKCaβ1. However, the exact mechanism needs further investigation.

All authors declare no financial or non-financial competing interests.

Zhuo Caoand Ning Zhangequally contributed to this work. This work was supported by the Zhejiang Provincial Health Department. We want to thank Professors Wei Xiao, Liang Dong and Yu Li at School of Medicine, Shandong University, and Drs. Xiangdong Xu and Xianghong Lu at People’s Hospital of Lishui City, for their valuable instructions.