Background: Management of ureteropelvic junction obstruction (UPJO) remains controversial. The aim of the present study was to measure the levels of matrix metalloproteinases (MMPs) in UPJO patients who were planned to undergo surgery and thus clarify if MMPs levels could serve as potential biomarkers of surgical obstruction in UPJO.

Results: A total of 17 infants with UPJO diagnosis, and median age 1.5 months, were prospectively recruited. MMP9 levels were significantly decreased in the serum samples of UPJO infants compared to controls (p =0.037). Also MMP2 values were higher in UPJO infants compared to controls, but the difference was not statistically significant (p =0.206).

Conclusions: This study found decreased concentrations of MMP9 in infants with obstructive hydronephrosis. However, the results should be tested in larger population samples and even be evaluated simultaneously with urine samples in order to delineate the ability of MMPs to serve as obstruction biomarkers. HIPPOKRATIA 2017, 21(3): 136-139.

The most common cause of chronic kidney disease in children is congenital anomalies of the urinary tract and particularly obstructive nephropathy1. Ureteropelvic junction obstruction (UPJO) constitutes the predominant cause of obstructive hydronephrosis, and its frequency in children with antenatal hydronephrosis is approximately 10-30 %2. Despite the extensive research, the management of pediatric patients with obstructive nephropathy remains a controversial issue3.

Pathogenesis of renal damage and progression of renal disease in obstructive nephropathy consists of a sequence of events at the cellular level which briefly includes dilation of the renal tubules, phenotypic cell migration, cell death and interstitial inflammation followed by glomerular damage and progressive interstitial fibrosis4. This process involves multiple enzymes, cytokines, genes, and signaling molecules.

Matrix metalloproteinases (MMPs) are well known for their ability to degrade a wide range of extracellular matrix (ECM) components. Furthermore, MMPs are also known to modulate growth factors and their receptors [transforming growth factor β (TGF-β), fibroblast growth factor receptor 1 (FGF-R1)], adhesion molecules (integrins and cadherins)and other cytokines and chemokines5. Consequently, aside from ECM remodeling, MMPs are involved in several processes such as angiogenesis, destruction of the basement membrane, cell migration and cell apoptosis, having pro- or anti-fibrotic role depending on the context6. Impairment of the physiological MMPs regulatory mechanisms in distinct renal disorders has been reported. Several animal and human studies regarding the role of MMPs in acute kidney disease, chronic kidney disease, and diabetic nephropathy have already been published7.

The aim of the present study was to clarify whether MMPs could serve as biomarkers in infants with UPJO, allowing an early diagnosis of renal dysfunction. In order to achieve this goal, we have designed a prospective case-control study during which serum levels of MMPs in UPJO infants planned to undergo surgery were compared to those of healthy controls.

The study group comprised of 17 neonates and infants who were referred to the Pediatric Nephrology unit, because of sonographic diagnosis of unilateral hydronephrosis (antenatal or not) after vesicoureteral reflux had been ruled out. More specifically, the inclusion criteria for the present study were: a postnatal sonographic diagnosis of renal pelvic dilatation (anteroposterior diameter greater than 15 mm), age under 24 months, voiding cystourethrogram negative for vesicoureteral reflux, presenting with a combination of the international accepted criteria8 that led to surgical referral (Figure 1, STARD diagram). Neonates and infants were excluded from the study if they had a history of bilateral UPJO, bilateral hydronephrosis, vesicoureteral reflux, vesicoureteral junction obstruction, posterior urethral valves, malformations in the lower ureter, urinary stones, disorders of immune system, previous surgery of the urinary system, any malformation of the external genitalia. 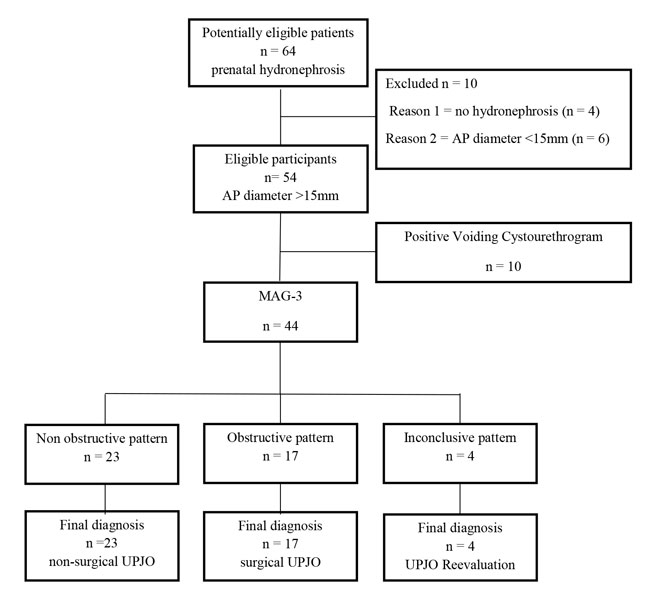 Figure 1: The STARD diagram presenting the steps on how potentially eligible patients, with prenatally diagnosed hydronephrosis, were recruited. Through kidney ultrasound and MAG-3 (Mercaptuacetyltriglycine) Lasix renal scan, a total of 17 surgical patients were selected to participate in the study.

A total of 17 healthy age-matched neonates and infants were included in the study as controls under the condition that they had a normal antenatal ultrasound scan and their personal and family history was free from any kind of kidney disease. Written informed consent was obtained from all parents following an explanation of the purpose of the study, and the study was approved by the Bioethics Committee of Medical School of the Aristotle University of Thessaloniki and performed in accordance with the ethical standards laid down in the 1964 Declaration of Helsinki.

This prospective case-control study was conducted from June 2014 until June 2017, in the First Pediatric Department of the Aristotle University, in Hippokratio hospital in Thessaloniki. Participants were recruited either through referrals from the two neonatal departments of the hospital, or through referrals from the outpatient clinic of the Pediatric Nephrology unit.

For each patient we recorded the date of birth, age at diagnosis, age at enrollment, gender, anthropometric features, birth mode (normal delivery or cesarean section), and results of prenatal ultrasound control. Each patient underwent renal ultrasonography by an experienced pediatric radiologist and the degree of hydronephrosis was graded according to the Society of Fetal Urology (SFU) classification system9. Moreover, all patients underwent a diuretic technetium-99m mercaptoacetyltriglycine (MAG-3) renography to determine T ½ and estimate washout curves for obstruction patterns. Before the renography, a serum sample was collected and stored at -80 oC while at the same time hematological and extensive biochemical tests for the evaluation of kidney function were performed. MMPs were measured in the Pediatric Immunology laboratory by enzyme-linked immunosorbent assay (ELISA) using a commercially available kit (R&D Systems Inc., Minneapolis, USA) according to the manufacturer’s protocol. All samples were tested twice. A pyeloplasty was advised for those patients presenting a combination of the following criteria: i) T ½ > 15-20 min in the diuretic renogram, ii) differential renal function (DRF) less than 40 % in successive radionuclide scans, iii) deteriorating renal function more than 5 %, iv) progressive thinning of the renal cortex with or without compensatory hypertrophy of the other kidney, v) clinical findings such as ipsilateral flank pain, vi) frequent pyelonephritis, vii) significant grade hydronephrosis, usually greater than 20 mm, and viii) other symptoms such as hypertension, hematuria, kidney stones8.

We used for statistical analyses the GraphPad Instat (GraphPad Inc., San Diego, CA, USA) software package. Due to the small sample, a nonparametric statistical analysis was performed. A Mann-Whitney U test was used to compare controls and patients while Kruskal-Wallis and Wilcoxon signed rank tests were used to analyze the patient group. A p value <0.05 was considered significant.

Clinical parameters of the patient and control groups are presented in Table 1. A total of 17 UPJO patients (14 boys, three girls) were recruited. The mean serum creatinine values were normal in all patients and controls. Ten out of the 17 patients were diagnosed with hydronephrosis grade four and seven with hydronephrosis grade three according to the SFU classification system9. T ½ in the (99m)Tc-MAG3 renogram was above 20 minutes in all patients.

This study found significantly decreased concentrations of MMP9 in the serum of patients with obstructive UPJO, however, according to our results, we found no significant difference in MMP2 levels between obstructive UPJO and healthy controls.

Having in mind, firstly that the pathogenesis of renal damage in obstructive nephropathy consists of a sequence of events which result in progressive interstitial fibrosis, secondly that MMPs hold pro- as well as anti-fibrotic properties depending on the context6 and thirdly considering the published data by animal and human studies, the potential role of MMPs as biomarkers in UPJO seemed more than probable. In this context, we attempted to measure MMP2 and MMP9 levels in the serum of UPJO patients since the molecular weight of these two gelatinases (72 kD and 92 kD respectively) is relatively small. However, one should take under consideration that renal reabsorption in this age group is clearly affected.

In 2010 Nicksa GA et al created a fetal ovine model and reported that urinary MMP activity correlates with the degree of kidney damage10. The presence of MMP-9 and that of 63-kD MMP2 was described as independent predictors of severity, and the authors suggested that prenatal urinary MMPs profiling may enhance patient stratification and counseling in the setting of congenital obstructive uropathy10. Altered expression or activity of MMPs has also been documented in the renal tissue of rats with hydronephrosis11-12.

Furthermore, studies in mice have pointed out the role of MMP9 in stimulation of renal fibrosis through an endothelial-mesenchymal transition during the evolution of renal injury post-obstruction13. On the other hand, scientists demonstrated that mesenchymal stem cells, which offer a protective role against obstruction-induced renal fibrosis, do so by decreasing MMP9 production14. Moreover, it has been proven that MMP9 contributes to kidney fibrosis via the endothelial–mesenchymal transition through Notch signaling in primary mouse renal peritubular endothelial cells15 and also in human kidney glomerular endothelial cells16. In addition to the above, since 2013 researchers depicted in mice with unilateral ureteral obstruction, that renal MMP9 expression followed a bi-phasic early- and late-stage upregulation of MMP9 activity17. During the early stages tubular epithelial cells were the principal source of MMP9, while during late-stages tubular epithelial cells, macrophages and myofibroblasts contributed to the production of MMP917.

Tian F et al in 2015 studied 40 children with non-obstructive unilateral UPJO for two years and measured urinary MMP918. They found that there was no significant difference between the basal condition and the last follow up visit in patients considered to have dilated non-obstructed kidneys. However, in patients considered to have obstructed kidneys, MMP9 levels at basal condition differed significantly from those before surgery18. Kaya C et al in 2010 determined MMP2 expression by immunostaining in tissue specimens from 21 children undergoing dismembered pyeloplasty19. The degree of MMP2 expression representing matrix turnover was statistically significantly elevated compared to healthy controls19. Reis et al in 2016 measured the expression levels of the MMP9 gene in tissue specimens from 16 children obtained at the time of dismembered pyeloplasty by quantitative real-time polymerase chain reaction20. Overexpression of MMP9 was found to be higher among patients with a severe grade of UPJO compared to those with moderate grade. However, further statistical analysis of these differences revealed that were not significant20.

Results between published studies are highly contrasting, and this could be attributed to a number of reasons. Those who tried to measure MMPs in tissue specimens utilized completely different techniques19-20. Second of all in regards to MMP2 and MMP9, the commercially available assays cannot distinguish between the active and the inactive form of the protease, perplexing conclusions even more6. Tian F et al who measured MMP9 compared values between UPJO patients in different stages of the disease and not between patients and controls18. Furthermore, they used urinary samples while in the present study MMPs were quantified in serum samples18. As a result, the findings of the aforementioned studies could not be directly compared to the present one due to methodological disparities.

Undoubtedly, the present study holds several limitations. The study sample was relatively small and this could have affected our results in terms of failing to reveal a statistically significant difference in MMP2 levels, additionally MMPs were quantified only in serum samples and only at one-time point. A larger study with more participants, with simultaneous measurements in both serum and urine samples, tests at multiple time points for the same patient could result to more robust results.

In conclusion, this study found significantly decreased concentrations of MMP9 in the serum of patients with obstructive UPJO but the results should be tested in larger population samples in order to delineate the ability of MMPs to serve as obstruction biomarkers.