Background: Malignant triton tumor (MTT) is an histological deviation of malignant peripheral nerve sheath tumor with additional rhabdomyosarcomatous elements. It is very rare, profoundly aggressive, with a tendency to recur locally and metastasize early. If manifests itself more often in individuals with neurofibromatosis type I (NF-1) disease but also sporadically or post radiotherapy.
Description of case: A 57-year-old male was admitted with a history of malignant triton tumor of the chest wall. Despite prior aggressive locoregional treatment including wide excision and adjuvant consolidating radiotherapy, the tumor recurred. The patient underwent a new operation and systemic chemotherapy, but expired a few months later due to disease progression.
Conclusion: MTT is exceedingly malignant requiring multimodality treatment. The cornerstone of management is radical surgical resection with clear margins. Nevertheless, the overall prognosis remains dismal.

Malignant triton tumor (MTT) is named after Titron salamander, which possesses the ability to regenerate supernumerary limbs consisting of muscle, nerve and bone tissue, if the cut end of its sciatic nerve is implanted into the soft tissue of its dorsal surface, as shown by Locatelli1. MTT is a very rare entity although it may be under-diagnosed2,3. Although there has been a case of diagnosis after fine needle aspiration4, neither the latter nor incisional biopsy are reliable enough5-8. MTTs are more aggressive than typical malignant nerve sheath tumors and follow a natural course consonant with high grade sarcomas. Complete surgical resection is the mainstay of treatment with adjuvant radiotherapy being used often to consolidate local disease control.

A 57-year old male was admitted to our department. His medical record included diabetes mellitus and heavy smoking (1.5 packs for 35years). On physical examination there were no signs of neurofibromatosis disease, such as café au lait spots or subcutaneous nodules nor there was a family history thereof.

In September 2008 he had been operated for a tumor of the right chest wall in another hospital. The resected specimen consisted of a soft tissue mass measuring 6.3 x 6 x 3.3 cm. Microscopic examination at that time revealed a peripheral nerve tumor of intermediate degree of malignancy with rhabdomyoblastic differentiation. Since the neoplastic cells were in close proximity to the surgical margins, the patient underwent a second complementary operation with wide excision in October 2008. He subsequently received radiotherapy to the ipsilateral thoracic wall, at a total dose of 60 Gy in 30 sessions over 6 weeks (2 Gy per session) with an electron beam of 15 MeV.

In March 2011, he presented with symptoms and signs of local inflammation and a computed tomography (CT) scan of the chest revealed a soft tissue mass (6 x 4 cm) at the site of previous surgery which was attributed to a local recurrence of the known tumor. The mass corroded adjacent bone structures and extended to the pleura, pushing the thoracic muscles to the front (Figure 1). The patient underwent a median sternotomy and a modified Masaoka operation9,10 with a T-like extension to the right, with en bloc removal of the affected thoracic wall, portions of four ribs and part of the lung that had been invaded by the tumor. A part of the ipsilateral half of the sternum was also removed and ipsilateral internal mammary vessels were ligated. The thoracic defect was covered with a Permacol® mesh. The operation was uneventful and the patient was discharged the 8th post-operative day. 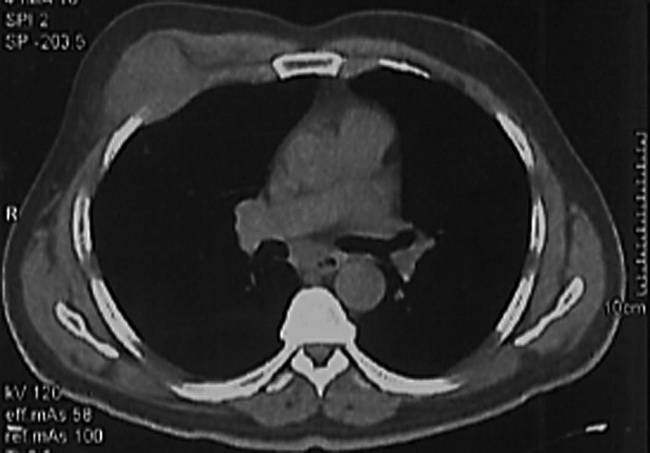 Microscopic examination confirmed that there was a local recurrence of the previously diagnosed MTT (Figures 2 and 3). The tumor consisted of elongated and spindly cells in a dense fascicular layout with eosinophilic cytoplasm. There were areas of necrosis with diffuse inflammatory infiltration. The neoplastic cells invaded blood vessels and stained positive to desmin, focal positive to SMA, focal mildly positive to sarcomeric actin, S-100, and negative to caldesmon, calcitonin, CD34, c-Kit, cytokeratines AE1/AE3. Ki-67 proliferative index was positive in approximately 60% of cells. The surgical margins were free of disease. 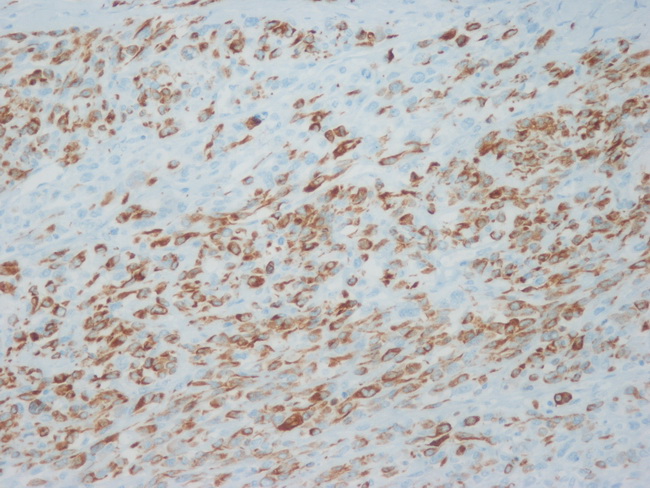 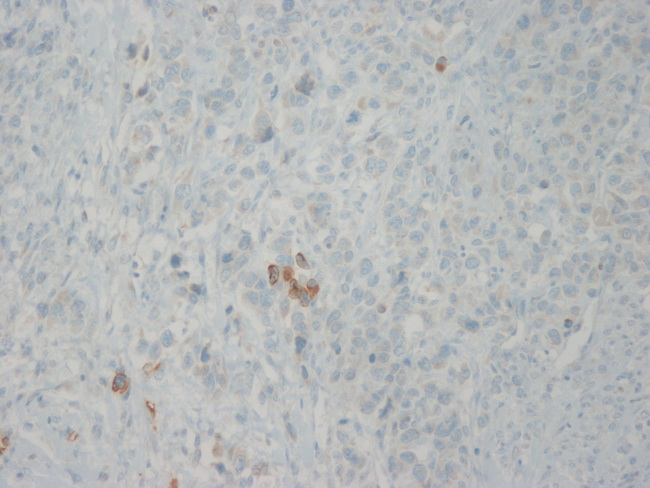 The patient was then referred to the medical oncology department of our hospital for further evaluation. He received three cycles of chemotherapy with ifosfamide and epirubicin. A CT scan of the chest in June 2011 showed a micronodular opacity in the left upper lung and the presence of small mediastinal lymph nodes (less than 10mm in diameter), both of which did not exist before. A CT scan of the abdomen was negative. After the fourth cycle, a new CT scan of the chest revealed multiple micronodular lung metastases and an enlargement of the left adrenal gland (3 cm in its diameter). At that point a progressive disease had been substantiated and the chemotherapy regimen was switched to trabectedin (Yondelis®). After having received two more cycles of chemotherapy, a new CT scan of the chest showed multiple lung metastases bilaterally, pleural effusion mainly to the left, a mass that invaded pectoralis major and mediastinal lymph nodes (the largest being 2 cm in its diameter). Performance status of the patient rapidly deteriorated shortly thereafter and he died under best supportive care, approximately 3 years from the initial diagnosis.

MTT was first described by Mason11 in 1932 but the term “malignant triton tumor” was not introduced until 1973 by Woodruff who specified the following diagnostic criteria12: 1. the tumor arises along the course of a peripheral nerve or in a location typical for peripheral nerve tumors or in a patient with NF-1 disease 2. the dominant population consists of cells with the same growth traits as Schwann cells 3. rhabdomyoblasts are present and originate from the body of the peripheral nerve tumor and which cannot be traced to either an extension or metastasis from an extrinsic rhabdomyosarcoma. In 1984 Daimaru3 further relaxed the above criteria to cover more cases.

One of the most established theories for the histopathogenesis of MTTs is that a multi-potent tissue of ectomesenchyme origin is capable of divergent differentiation to both nerve and muscle components. Supporting evidence originate from the work of Magrini et al13 who showed that all neoplastic cells share the same cytogenetic pattern, suggesting a common origin of both cell lines (schwannoma cells and rhabdomyoblasts). Interestingly, Nikitin et al14 showed that in a rat model, schwannoma cells were capable of direct transformation into rhabdomyoblasts, implying that the multi-potent cell of discussion may be the Schwann cell itself.

From an epidemiological point of view MTTs are associated with NF-1 disease in 70% of the cases15, with the rest being sporadic15 or a post-radiotherapy manifestation5,16,17. Brooks et al report an equal distribution among genders15, whereas Rekhi18 and Aldalyami19 describe a male predominance. Regarding the location, Brooks reports head, neck and trunk as the prevailing sites15, whereas Rekhi18 extremities. If MTT is associated with NF-1, it presents more often in young male adults whereas its sporadic counterpart in older females20.

Clinical findings are non-specific and depend largely upon the affected site. They are usually associated with a rapidly enlarging mass which invades or puts pressure on adjacent anatomic structures.

The diagnosis is based on microscopic examination along with immunohistochemical staining. Variation in immunohistochemical markers between the primary tumor and its recurrence (as in our case) may demonstrate laboratory variability or alterations in tumor cell antigenicity either in the context of the natural course of the MTT itself or due to the effect of adjuvant chemotherapy and radiotherapy21. Nerve sheath differentiation is confirmed by S-100 protein3 and Leu-7 (CD57)22 positivity, whereas rhabdomyoblastic differentiation is confirmed by positivity to myoglobin, desmin, muscle-specific actin, sarcomeric actin, myoD and myogenin23. The differential diagnosis consists of a large variety of neoplasms, most notably24 rhabdomyosarcoma and leiomyosarcoma, but also18,25,26 fibrosarcoma, malignant fibrous histiocytoma, monophasic synovial sarcoma, ectomesenchymoma, neurofibroma, benign triton tumor and hemangiopericytoma.

Prognostic factors include the tumor location (better for extremities, head, neck, worse for trunk, buttocks, retroperitoneal and CNS)27, extent of surgical excision20,28, degree of differentiation and growth pattern (better for well differentiated exophytic-polypoid tumors, less for undifferentiated, invading ones)29, Ki67 labelling index30, exposure to radiation (worse if true)5,17,31, performance status and comorbidities. Regarding NF-1 status researchers converge on the view that it does not affect prognosis28,32. Overall survival rates range between 66-76% at 1-year, 12-49% at 5-years and 10-37% at 10-years15,19,28.

Because of its rarity, management strategies for MTTs are not well established especially in the advanced or metastatic setting. Total surgical resection of the tumor with negative margins remains the most defining factor for a good prognosis. In the case of suboptimal cytoreduction, a second more extensive surgical excision should always be pursued, as the former does not appear to provide a considerable survival benefit itself while at the same time precludes largely any anticipated therapeutic gain from adjuvant chemoradiotherapy20,32.

Adjuvant fractionated radiotherapy has not given consistent results, with local recurrences being often, shortly after or even during the course of radiotherapy33. The general consensus though is that it should be administered7,15,18,32,34 given the propensity of MTTs to recur locally15. Total dose schedules vary from 30Gy21 to 70Gy35 in the literature depending on the clinical context (e.g., surgical radicality, histological grading, curative vs palliative intent). Proposed chemotherapeutic regimens include PEI (cisplatin, etoposide, ifosfamide) as first-line chemotherapy and IA (ifosfamide, adriamycin) or MAID (mesna, doxorubicin, ifosfamide and dacarbazine) as second line treatment20. There have been previously reported cases of MTTs that responded favorably to treatment with isotretinoin (a retinoid analogue) and interferon-α, if retinoic acid receptors were present in the tumor specimen, with patients achieving long-term complete remissions36. Unfortunately these results have not been reproduced by others in the context of MTTs37.

Conclusively, MTTs are rare, aggressive tumors with mixed nerve and muscle components, that tend to recur locally and metastasize, requiring a multimodal treatment. Radical surgical excision is the only therapeutic intervention with curative intent at the moment.

We declare no conflict of interest.