Background: To understand the genesis and progression of atherosclerosis is essential to elucidate the blood flow and the transport of molecules in the cardiovascular system. The purpose of this computational study is to elucidate the relationship between low wall shear stress (WSS) – high site concentration of low density lipoproteins (LDL) and atherosclerotic sites in the normal human aortic arch under physiological flow and mass transport conditions.
Methods: The numerical simulation couples the flow equations with the transport equation applying realistic boundary conditions at the wall in terms of blood-side concentration. The blood is considered to be non-Newtonian fluid obeying to the power law. Suitable mass transport conditions are specified at the wall.
Results: Aortic arch walls are exposed to cholesterolemic environment although the applied mass and flow conditions refer to normal human geometry and normal mass-flow conditions. The luminal surface LDL concentration varies inversely with the WSS. Regions of high LDL luminal surface concentration do not necessarily co-locate to the sites of lowest WSS. Concave sides of the aortic arch exhibit, relatively to the convex sides, elevated concentration of the LDL. The area averaged normalized LDL concentration over the entire normal aortic arch is 1.267. The daughter aortic arch vessels exhibit, relatively to the main aorta, elevated LDL concentrations.
Conclusions: The near wall paths of the velocities might be the most important factor for the elevated LDL concentration at areas located either at the vicinity of bifurcations regions or at high curvature regions.

The disturbed blood flow and occurrence of atherosclerotic plaques, at certain sites of the human vascular arteries, are strongly correlated1. Elucidating the blood flow and transport of macromolecules in the cardiovascular system2 is essential to understand the genesis and progression of atherosclerosis. The human aortic arch has significant geometric characteristic configurations. One of these is that its centreline does not lie in a plane. Furthermore, there are major branches at the top of the arch. Individual variants in the aortic arch geometrical factors are thought to induce serious diseases. Wall shear stress (WSS) may affect the endothelial permeability3. Regional variations in the permeability of arterial endothelium may contribute to the localization of atherosclerosis4. The Low-Density Lipoproteins (LDL) transport across the artery wall is considered to be a step of paramount importance in atherosclerosis5. Atherosclerosis shows a predilection in regions of arterial tree with hemodynamic particularities as local disturbances of WSS in space1 and local high concentrations of lipoproteins6. At bends of the arterial segments, the WSS increases substantially at the convex parts due to increased velocity resulted from high wall curvature, while at the concave parts the WSS exhibits relatively low values7,8. The wall pressure may also affect the atherosclerosis development9. Ethier2 concluded that elevated LDL co-localize with known sites of atherosclerotic plaque development. Atherosclerotic regions are also low WSS regions and consequently it was difficult to determine whether it was low WSS, abnormal mass transfer or both that were contributing to astherosclerosis. In a theoretical study of a straight artery10 suggested the possibility that all vascular phenomena were governed by the flow-dependent concentration polarization of LDL which carry cholesterol. They concluded that the localization of atherosclerotic lesions results from the LDL concentration, which locally creates a hyper-cholesterolemic environment. Regions of elevated LDL luminal surface concentration did not necessarily co-located to the sites of lowest WSS. Elevated flow dependent concentration polarization of LDL plays an important role in the localization of anastomotic intimal hyperplasia in the human arterial system. The accumulation of LDL in vascular districts featuring a highly disturbed flow was examined11. The objective of this paper is to numerically analyze the steady flow and LDL mass transport patterns along with the WSS distribution over the normal human aortic arch. Primary scope of this work is to elucidate the low WSS-elevated LDL concentration distribution, in relation to atherosclerotic plaque localization over the normal human aortic arch. Emphasis is put in the LDL concentration distribution, factors affecting mass transport to aortic wall, WSS, wall pressure gradient as well as in the distribution differentiation of the LDL and WSS between concave and convex aortic arch parts.

The 3D geometry of the employed normal human aortic arch computational model has been generated on data compiled from several sources. These data are processed with a CAD program resulting into a geometry model of the aortic arch shown (with computational grid) in Figure 1. 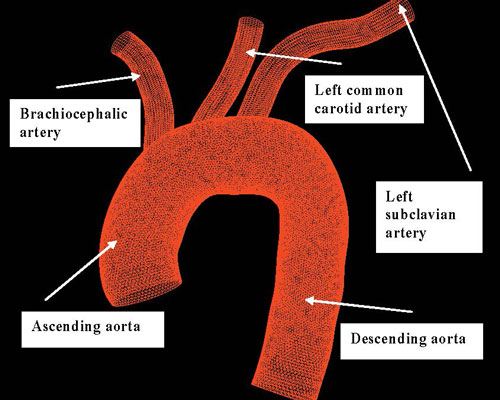 All computational grid data as well as all physical flow data determined from the boundary conditions is imported into the main Computational Fluid Dynamics solver12. The numerical code solves the governing Navier-Stokes and the mass transport equations. More details can be found elsewhere9. The blood velocity is assumed to be uniform at the orifice of the ascending aorta. The applied inflow conditions mimic typical aortic blood averaged flow velocity of 0.05 m/s (resting flow conditions). Flow discharges are set analogous to the third power of the branching vessel inlet diameter according to Murray’s law. For the mass transport solution a uniform constant concentration Co=1.3 mg/ml of LDL is applied at the orifice of the ascending aorta. At the descending aorta, brachiocephalic artery, left common carotid artery and left subclavian artery outlets, the gradient of LDL concentration along the vessels is set equal to zero. Suitable mass transport condition must be specified at the wall. The boundary conditions at the semi-permeable aortic walls can be described as, where Cw (mg/ml) is the concentration at the endothelial surface, Vw (m/s) is the transmural component of the fluid velocity at the wall, n is the direction normal to the wall. The boundary condition described in the above equation states that the net amount of LDL (=) passing from the endothelium to the vessel wall is determined from the difference of the mass flow carried to the vessel wall by infiltration flow (=) and the amount of flow which diffuses back to the main vessel flow (=). It is known that the LDL concentration at an arterial wall takes higher values than that in the bulk flow in the vesselsand increases with increasing infiltration velocity. Inthe absence of systematic and reliable experimental data for human arteries, we assume the value of molecular diffusivity D to be constant and equals 15.0×10-12 m2/s 13,14. The diffusivity is assumed to be isotropic throughout. The infiltration velocity Vw is set equal to 0.6×10-8 m/s 15. Regarding the endothelial permeability K (mass transfer coefficient), there is limited amount of experimental data about it. Thus, specifications of K values are sometimes unreliable. In the current analysis the K value is set equal to 2.0×10-10 m/s 14.

The calculated LDL luminal surface concentration values Cw are normalized with the inlet value of LDL concentration Co. Typical relationship between normalized LDL (Cw/Co) with the WSS, over the aortic arch, is shown in Figure 2. 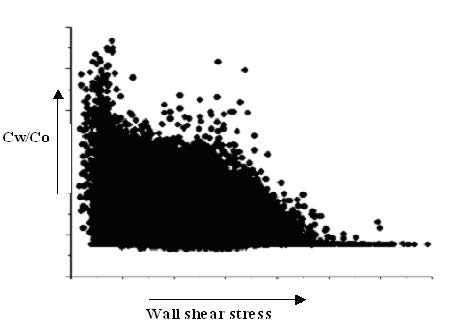 The convex side exhibits, relatively to the concave side, high WSS values. Surface concentration Cw/Co for the ascending-descending aorta side view and inner wall (convex part), are sho wn in Figures 4a and 4b, respectively. The spatial gradients of the LDL are considerable. 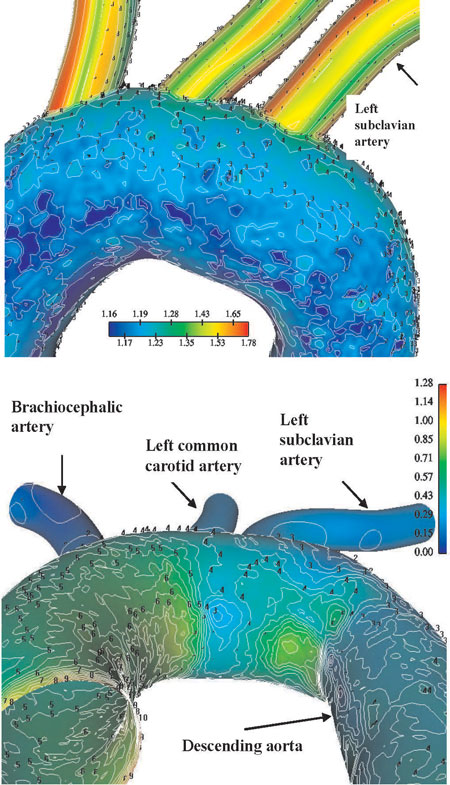 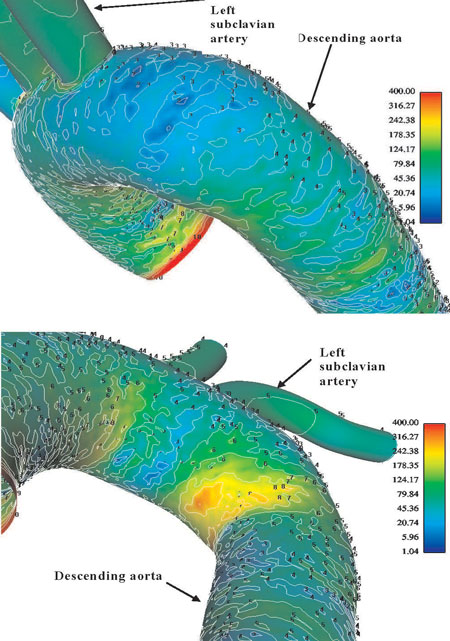 Wherever and whenever the flow becomes abnormal, the balance between the mass flow of substances from main blood stream to the arterial wall and vice versa is disrupted. The action of mass transport occurs within a very thin layer located very close to the wall. Thus, any perturbation of the flow quantities in this sensitive flow region initiates mass flow disturbance to and from the arterial wall. Endothelial cells from regions subjected to various values of WSS exhibit various biological and biochemical functions. It seems that cell surface as well as sub-cellular distribution of WSS plays a key role in pathogenesis of atherosclerosis16. Cellular structures probably serve as mechano-transductions17. Atherosclerotic regions are probably low WSS regions1,9. Since the WSS interacts with the endothelial cells and subsequently with the arterial wall permeability, it is difficult to determine whether it is low WSS or abnormal mass transfer coefficient (permeability coefficient) or both that contribute to atherosclerosis. WSSand wall pressure gradientwere found to be highly non-uniform along the aorta. Calculated data indicate that regions of high WSS are distributed, amongst others, along the inner wall of the ascending aorta and inner wall of the descending aorta. In contrary, low WSS regions are distributed along the outer wall of the arch. High and low WSS may be found next to each other without a definable boundary in between. The wall pressure gradient, Figures 5a and 5byield similar distribution to the LDL one. Low wall pressure gradient give rise to high LDL concentration. At low WSS values and as they approach zero the LDL concentration is rapidly increasing. The same relationship, Figure 2, shows that a lot of scattered points can be found. LDL concentration is not only WSS dependent. The combined fluid and mass transport are the keys to understand the atherosclerosis phenomenon. It is the contacting time and the interaction between the LDL and the aortic endothelium surface that really matters. It is evident that the normal human aortic arch walls are exposed to cholesterolemic environment although the applied mass and flow conditions refer to normal human geometry and normal mass-flow conditions. High luminal surface concentration does not necessarily denote that all the LDL molecules will be transported to the arterial vessel wall. It is the permeability of the endothelium, which largely determines the final amount of mass passing through the wall. Current results suggest that arterial sites exposed to low WSS are more likely to exhibit elevated permeability. Peak LDL concentration regions are located at the concave side of the descending aorta just downstream of the left subclavian artery. Always, concave sides result into elevated LDL concentration. In contrary, all convex sides result into low LDL concentration. The convex sides of the ascending-descending aortic arch exhibit small LDL concentration. The mechanism of elevated LDL concentration might be also attributed to the high curvature effects upon the flow pattern and the subsequent spatial accumulation of the LDL as the mass transport equation specifies. It is the near wall paths of the velocities which might be the most important factor for the elevated LDL concentration for areas located either at the vicinity of bifurcations regions or at high curvature regions. The flow patterns exhibit high velocity magnitudes near convex sides. An unsteady flow analysis of the aortic arch using coupled fluid flow and mass transport equations will shed more light into oscillating elevated LDL luminal surface concentration. Coupled luminal blood flow and transmural fluid flow will be a natural extension of the current research work.