Cases report: We report the cases of three patients who were referred to the ENT outpatient department for a persistent unilateral nasal obstruction that was resistant to medical treatment. After their clinical and endoscopic examination and imaging evaluation, these patients underwent endoscopic excision of the sphenochoanal polyps which in histopathology were proven to be inflammatory polyps.

Conclusion: Although rarely seen sphenochoanal polyps must be kept in mind in the differential diagnosis of unilateral sphenoid sinus and posterior nasal cavity masses. HIPPOKRATIA 2017, 21(3): 150-153.

A choanal polyp is a benign solitary mass originating from the edematous and inflamed mucosa of the paranasal sinuses, passing through the sinus ostium, located within the nasal cavity and extending to the nasopharynx with a wide pedicle1. According to the paranasal sinus of origin, those arising in the maxillary sinus are known as antrochoanal, those emerging from the sphenoid sinus as sphenochoanal, and those from the ethmoid sinus as ethmochoanal polyps2,3. We present the cases of three patients who were diagnosed and treated for sphenochoanal polyp in our department.

A 43-year-old male patient who had undergone chemoradiotherapy two years previously for pulmonary malignancy presented with one-month complaint of a constant headache, so a cranial magnetic resonance imaging (MRI) was performed to exclude possible brain metastasis. A cystic mass lesion was identified in the left sphenoid sinus, measuring 29 x 28 mm and demonstrating peripheral contrast uptake. The lesion was extending to the nasopharynx with borders that could not be clearly distinguished from the left inferior nasal turbinate, showing heterogeneous contrast and sized 26 x 21 x 23 mm, and could not be differentiated safely from a malignancy (Figure 1). In the nasal endoscopy, a smooth-surfaced mass was revealed filling the left nasal passage and preventing access to the nasopharynx. During the endoscopic examination under general anesthesia, performed for excisional biopsy, a sphenochoanal polyp was observed that had expanded the sphenoid sinus ostium and was filling the sphenoid sinus, extending to the nasal passage and nasopharynx with a wide pedicle from the ostium (Figure 2). The patient underwent endoscopic sinus surgery. Endoscopic sphenoidotomy was performed with enlargement of the ostium and removal of the anterior wall of the sphenoid sinus. The polyp was excised together with its pedicle and the part inside the sphenoid sinus. 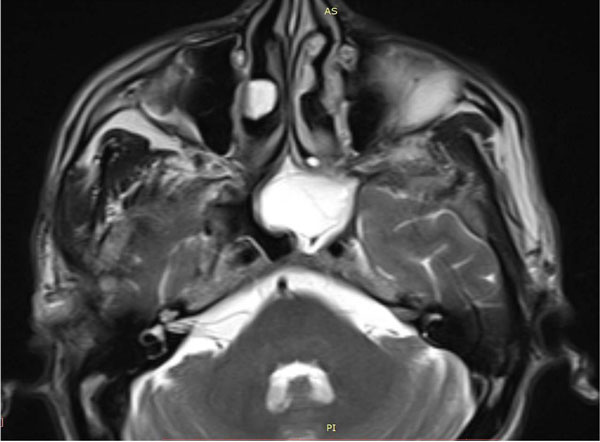 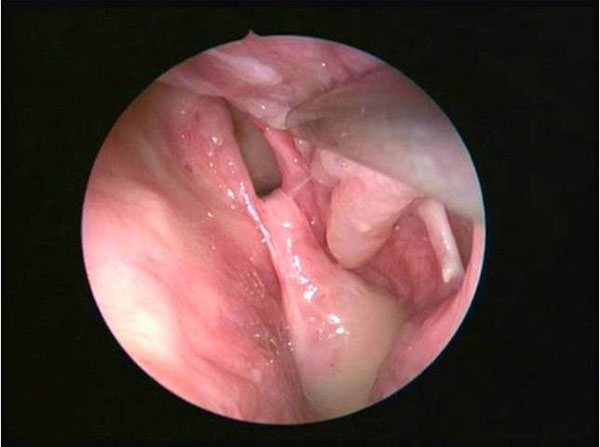 Figure 2: Intraoperative image demonstrating the enlarged sphenoid sinus ostium and the pedicle of the sphenochoanal polyp which extends to the nasopharynx.

A 36-year-old male patient presented with a two-month history of nasal obstruction, was diagnosed with nasal polyposis and was given medical treatment but his complaints did not subside. On the paranasal sinus MRI, a soft tissue mass was found with dimensions 30 x 20 x 25 mm, extending from the sphenoid sinus to the posterior right nasal cavity as far as the nasopharynx (Figure 3). In the nasal endoscopic examination performed in the clinic, a polypoid mass was identified extending from the posterior right nasal passage to the nasopharynx and filling the nasopharynx. With an initial diagnosis of nasal polyposis, the patient underwent endoscopic sinus surgery under general anesthesia. The polyp was found to originate from the right sphenoid sinus, expanding the ostium and extending with a pedicle to the nasopharynx, and was completely excised with its pedicle by performing endoscopic sphenoidotomy for treatment of the disease (Figure 4). 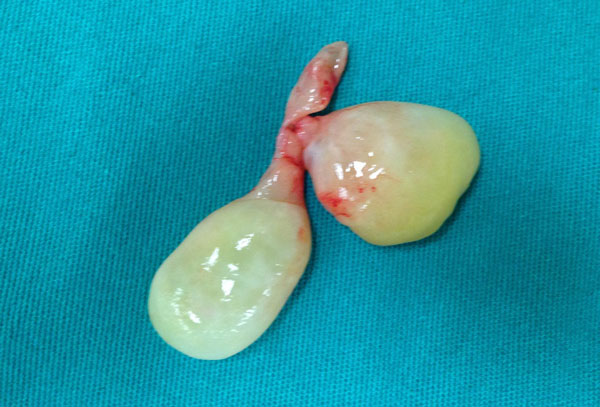 Figure 4: Macroscopic operative image of the excised sphenochoanal polyp with its pedicle.

A 12-year-old patient presented at the clinic with complaints of nasal obstruction and inability to smell, which had not recovered despite two months of medical treatment. In the nasal endoscopic examination, shiny and smooth-surfaced polypoid tissue was observed, beginning from the mid concha level and extending posteriorly, filling almost completely the left nasal passage to the nasopharynx. On the paranasal sinus computed tomography (CT) scan, a homogenous soft tissue mass was shown which was almost filling the left sphenoid sinus cavity (Figure 5). Based on these findings, the patient was planned for endoscopic sinus surgery, and during the procedure, a polyp was seen which originated from the left sphenoid sinus and covered the choana entirely (Figure 6). Endoscopic sphenoidotomy was performed. The polyp was totally excised with its pedicle which was expanding the sphenoid sinus ostium together with the mucosa inside the sinus where the polyp originated. 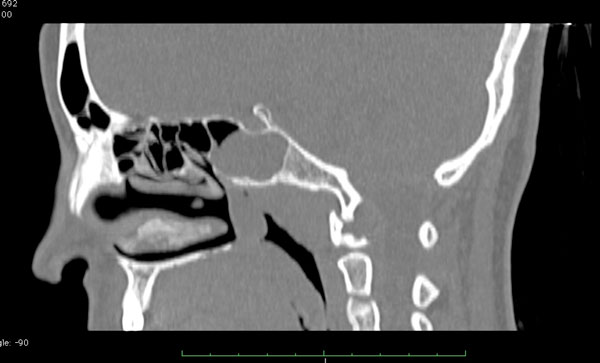 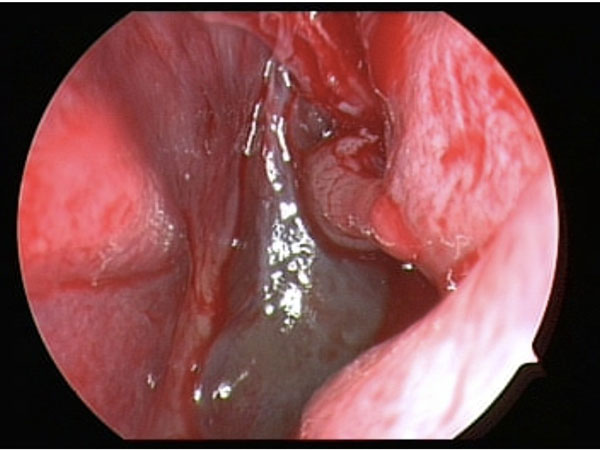 Figure 6: Intraoperative endoscopic view of the 12-year-old patient showing a sphenochoanal polyp originating from the left sphenoid sinus and obstructing the choana.

All the patients were discharged the day after surgery. They are followed-up as routine endoscopic sinus surgery patients. All of them had a perfect recovery with no complications. The histopathology results of all three specimens reported inflammatory infiltration formed of fragmented leukocytes, lymphocytes, and plasma cells covered with pseudostratified epithelium and subepithelial edema. No recurrence was seen in any of the patients in a three years endoscopic follow-up period. Informed consent for reporting the cases was obtained from the patients and the parents of the pediatric patient.

As seen in the three reported cases, patients with a sphenochoanal polyp usually present with complaints of nasal obstruction, nasal discharge, headache, snoring, nose bleeds, and ear fullness associated with eustachian tube obstruction7. In the endoscopic examination of the nose, a soft tissue mass is observed not permitting access from the nasal cavity to the nasopharynx. Usually the sinus from which the choanal polyp originates can be determined with a careful endoscopic examination. An antrochoanal polyp reaches the choana by progressing between the middle nasal turbinate and the lateral nasal wall after emerging from the maxillary sinus ostium, while a sphenochoanal polyp reaches the choana by advancing between the septum in the sphenoethmoid recess and the middle turbinate after emerging from the sphenoid sinus ostium2,8.

The CT findings of the presence of a mass extending from the sphenoid sinus to the choana and nasopharynx, combined with normal ventilated ethmoid and maxillary sinuses, and expanded sphenoid sinus ostium suggest a sphenochoanal polyp. As the features of the mass regarding localization of the pedicle origin, invasion of the surrounding tissues, relation to the bone structures, mass size, and contrast dye enhancement can be adequately evaluated with CT; it is possible to make a firm preoperative diagnosis of the polyp. When the diagnosis is difficult, or another pathology is considered, an MRI can be requested as a supplementary imaging modality.

In isolated sphenoid sinus lesions, one should carefully examine the CT, especially when the mass has posterolateral and superolateral location, considering a carotid aneurysm, the proximity of the carotid artery to the optic nerve and the possibility of dehiscence and thus manipulations within the sinus must be applied carefully9,10. The determination of the sinus from which the polyp originates with CT and MRI imaging avoids unnecessary and extensive surgical interventions1,5,7.

In the differential diagnosis of choanal polyps, clinicians should consider adenoid hypertrophy, angiofibroma, Thornwaldt cyst, hypophysis tumor, lymphoma, inverted papilloma, inferior concha hypertrophy, glioma and nasopharynx cancer2,7. MRI is a helpful assistive imaging modality in the differentiation of such mass from a malignancy. Performing a biopsy further facilitates making a definitive diagnosis in suspicious cases7. There are no studies in the literature showing the efficacy of medical treatment for sphenochoanal polyps like nasal or systemic steroids8. With endoscopic excision of these polyps, the polypoid part wrapped around the choana is totally removed together with its pedicle and the portion within the sphenoid sinus. When the polyp is not completely removed, the part left within the sphenoid sinus can cause recurrence1,3. It is significant to perform large sphenoidotomy and remove the mucosa where the polyp originates in order to avoid recurrence. If possible, drilling the sphenoid bone in the site of origin can also be performed for better results.

In conclusion, although rarely seen, sphenochoanal polyps must be kept in mind in the differential diagnosis of unilateral sphenoid sinus masses and choanal polyps, and thus, unnecessary medical treatment and unrelated sinus surgery can be avoided.

The authors declare no conflict of interests.No financial support was received.