Skip to content
hippokratia.gr > Volume 21 (2017) - Issue 1 > Intavenous immunoglobulin for the management of intractable epilepsy in a boy

Background: The involvement of the immune system in the pathogenesis of certain types of epilepsy has been supported in the past. The use of intravenous immunoglobulin in the treatment of neurologic diseases has shown a progressive trend over the last years. Case report: We report the case of a 9.5-year-old boy with refractory epilepsy who was admitted for investigation of his persistent seizures and severe psychomotor regression. He experienced persistent tonic-clonic over the preceding six months and long lasting atonic seizures since the age of six and did not respond to multiple anticonvulsant drugs. The administration of intravenous immunoglobulin achieved seizure control and cognitive improvement. Conclusion: This case underscores the efficacy of intravenous immunoglobulin in the treatment of refractory epilepsy in children. HIPPOKRATIA 2017, 21(1): 55-57.

The involvement of the immune system in the pathogenesis of certain types of epilepsy has been supported in the past1. The role of proinflammatory cytokines interleukin-6 (IL-6) and interleukin-8 (IL-8) has been implicated as they are seizure-induced2. In the brain, chemokines have a role in the neural development and synaptic function. IL-6, as well as IL-8, can be produced in the central nervous system by the microglia, neurons, and astrocytes. The induction of IL-6 production during the seizure activity has been confirmed by Billau et al2. The hypothesis that inflammatory cytokines could modulate neurotransmission has also been raised3. The proposed mechanisms of action of intravenous immunoglobulin (IVIG) in neuroinflammatory diseases are the reduction of anti-glutamic acid decarboxylase autoantibodies, the modulation of cytokines and blockade of Fc receptors, and the elimination of complement components2. Herein we describe the case of a child with refractory epilepsy and psychomotor regression who was improved remarkably with IVIG infusions.

A 9.5-year-old boy was admitted for investigation of his persistent seizures and severe psychomotor regression. On admission he was found to be of normal growth and his perinatal and personal history was unremarkable. He grew up uneventfully until the age of six and since suffered atonic seizures during awakening, with head drops for a few seconds (once or twice per month) that could just be recognized by the parents. These were followed by occasional falls, especially soon after the morning awakening. Magnetic resonance imaging (MRI) was normal while his electroencephalogram (EEG) revealed only rare, posterior-occipital spikes. Due to the uncertainty regarding the nature of these events, it was decided not to commence any medication but to continue watchful waiting. For the following three years, he continued to experience similar events, although at reduced frequency. At the age of nine years, he suffered three generalized tonic-clonic seizures of three minutes duration. The new EEG showed generalized spike waves (SW), and polyspike waves and therapy was commenced with valproic acid (20 mg/Kg per day divided in two doses). His seizures became more frequent, and complicated; atonic/tonic-clonic on a daily basis. A 24-hr Video-EEG study was performed at that time, revealing diffusely slowed background and vast amounts of interictal epileptic activity consisting of generalized slow-spike and wave discharges (2-2.5 Hz), bursts of generalized paroxysmal fast activity during sleep, and bilateral occipital sharp waves occurring either independently, or synchronously, over both sides. Seizures were not recorded during that session, and even during the more prolonged generalized slow-spike and wave discharges (6-7 sec), there would be no gross change in his alertness. He would continue doing baseline activity and respond appropriately. Overall, his electroclinical features were strongly suggestive of Lennox-Gastaut syndrome. Over time, further deterioration was observed, which posed difficulties with his walking and talking, so Topiramate (15 mg/Kg per day divided in two doses)was added to his treatment. Although the tonic-clonic seizures were reduced, the atonic were still very frequent and ‘absence’-type seizures were added. On admission, he demonstrated severe psychomotor regression while the remainder of the neurologic as well as pediatric examination was uneventful. EEG waking background was diffusely slowed with frequent generalized SW and polyspike waves (Figure 1), while his brain MRI was without abnormal findings. The child was submitted to lumbar puncture and the cerebrospinal fluid obtained was clear, without pleocytosis, and its culture was negative. Thorough clinical and laboratory assessment excluded any possible underling metabolic syndromes. The dosage of valproic acid was increased to 30 mg/Kg per day divided in two doses. Two months later he was readmitted due to severe, long-lasting atonic seizure with loss of consciousness, which cause him to fall and sustained injury to his head. Levetiracetam (30 mg/Kg per day divided in two doses) was added, and ketogenic diet was initiated for three months with no substantial improvement. The tonic-clonic seizures discontinued, but the atonic ones were 7-8 daily, plus multiple daily ‘absences’. At the age of 10.5 years, due to the persistent seizures, a decision was made to start IVIG. Informed consent was obtained from the parents before initiating the treatment. Topiramate was discontinued and valproic acid dosage was increased (40 mg/Kg per day divided in two doses). Every 21 days, he had an IVIG infusion at a dosage of 2 g/kg. Eventually, he started being more altered with better communication level, and seizures were reduced by 50 %. After the sixth infusion, the child suffered only night tonic or tonic-clonic seizures (1-2 per night, 70 % reduction), without any ‘absences’ and atonic seizures. His psychomotor condition was significantly improved, so as he was able to have home tutoring and physiotherapy sessions. Valproic acid was gradually decreased (reduction rate 5 mg/Kg every two IVIG infusions) to a maintenance dose (15 mg/Kg per day divided in two doses). He had his last seizure after the 17th infusion. The infusions continued every 21 days for a year, then one every two months, and the last at five months from the preceding. He received in total 20 infusions. Two years after infusion discontinuation, he is still free of seizures, has regained normal psychomotor development and his EEG is normal. 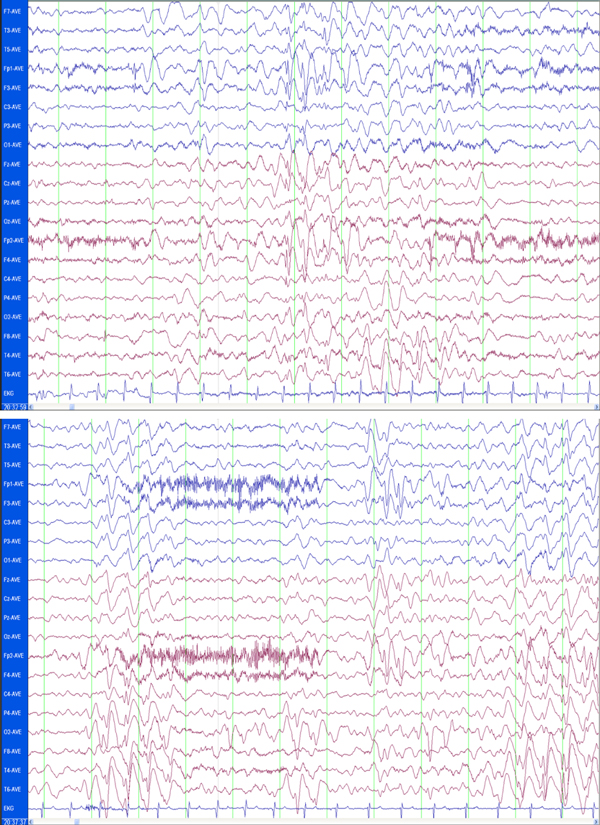 Current literature data indicate that immune-mediated mechanisms are involved in the pathogenesis of epilepsy. There is mounting evidence of the role of inflammation in epilepsy justifying the use of immunomodulatory and anti-inflammatory agents such as IVIG and prednisone4,5.

Immunologic changes described in Lennox-Gastaut syndrome include increased immunoglobulins G (IgG) and M (IgM) serum concentrations, decreased κ-λ ratios of total blood IgG and IgM, increased HLA-7 and HLA-DR5 blood antigens and an increase in levels of a precipitating antibody in brain tissue6. Interest has been promoted on trying anti-inflammatory and immunomodulatory treatments in Lennox-Gastaut and other severe generalized epilepsy syndromes including West syndrome, Landau-Kleffner, and Continuous Spike and Waves in Slow Wave Sleep syndromes. Although there are no randomized controlled studies, trials with corticosteroids and adrenocorticotropic hormone may be beneficial in Lennox-Gastaut syndrome and are currently suggested, if appropriate antiepileptic drugs fail7.

The use of IVIG in the treatment of neurologic diseases has shown a progressive trend over the last few years, but its optimal use is deficient8. IVIG, and its benefit for patients with inflammatory and autoimmune neurological disorders as Rasmussen syndrome and multiple sclerosis has been established9.

The potential therapeutic role of IVIG in refractory epilepsy of children is unclear as well as the mechanisms of action in affecting seizures10. Billiau et al reported that IVIG limits the progression of electrical seizure activity into clinical seizures rather than affecting the basic epileptic process itself as it was suggested earlier2. Clinical improvement has been reported as a benefit of IVIG including cases of total seizure remission11.Small case series suggesting that IVIG treatment in Lennox-Gastaut syndrome may be accompanied by seizure reduction, have been reported12-14. Tang-Wai et al compared the efficacy of IVIG and high dosage prednisone as treatment of intractable epilepsy in children. They report that IVIG has a greater response (seizure reduction) and lower adverse events. It remains unclear if IVIG should be considered early in the course of epilepsy before intractability is persistent. Besides, evidence on the timing of IVIG discontinuation is still lacking15.

There are no long-term data on the duration of the treatment effect, following its discontinuation. Our patient was still seizure-free and cognitively improving two years following his last infusion.

This case suggests that IVIG treatment is effective in intractable epilepsy of children, even if commenced a long time after disease onset. Further controlled and long-term studies are needed to investigate the effectiveness and safety of IVIG, appropriate treatment timing, as well as long-term outcomes and the action mechanisms involved.