Intravenous (IV) paracetamol is widely used for the treatment of pain and fever, when there is a clinical indication for an IV route. A 16-month-old girl weighing 12 kg had undergone anterior open reduction for developmental dysplasia of the hip. Twenty-four hours after the operation, IV paracetamol (Perfalgan® 10 mg/ml) infusion was started for the postoperative pain management. After 12 hours’ infusion, she has developed nausea, vomiting and agitation. The liver function tests were found to be more than 10-fold elevated on the laboratory results. When the medication order was checked, it was shown that she had been administered paracetamol 5 times at a dose of 42 mg/kg (total: 2.5 g/30 hours or 168 mg/kg/24 hours). The patient was started on N-acetyl cysteine (NAC) therapy immediately. She was asymptomatic at the 36th hour of the NAC treatment and the liver function tests completely recovered over 15 days. Since the errors in the calculation of the dosage of IV paracetamol may lead to serious complications or even death, physicians should be careful not to miscalculate when preferring the IV form of the drug.

Oral and rectal formulations of paracetamol are widely used in the pediatric age group. Intravenous (IV) paracetamol is preferred to these preparations especially in the hospital settings. It is available as a solution for infusion of 10 mg paracetamol per 1 ml solution in 50 ml vials and 100 ml vials. The 50 ml vial is only for use in term newborns, infants, toddlers, and children who weigh less than 33 kg1. The commercial preparations of IV Paracetamol is in use since 2007, while 50 mL solution vials for infusion are absent in Turkey.

To our knowledge, despite the introduction and wide use of IV paracetamol in the pediatric settings, there is still not any established nomograms to use after overdose, due to multiple IV administrations of the drug. We report a case of acute liver failure after accidental overdose of IV paracetamol infusion which was successfully treated with IV N-acetyl cysteine over 3 days.

A 16-month-old girl weighing 12 kg had undergone anterior open reduction for developmental dysplasia of the hip. She was administered sevoflurane, propofol and fentanyl during the anesthesia, and cephazolin for antibiotic prophylaxis. Within the postoperative 24 hours, she became agitated and began to suffer from pain and vomiting. IV route of administration of the analgesic therapy was preferred, as the child was vomitting. After 6-8 hours, she had nausea, anorexia, and vomiting, which occured more than 10 times a day. She was confused and agitated. Her vital signs were as follows: body temperature: 37.2 °C, heart rate: 114 beats/min (age-specific normal range: 90-150 beats/min), respiratory rate: 32 breaths/min (age-specific normal range 22-30 breats/min), blood pressure: 100/62 mm/Hg (age-specific normal range: < 102/57 mmHg), oxygen saturation: 96% on room air. The liver was not palpable on physical examination, while the liver function and coagulation tests were as follows: AST: 455 U/L, ALT: 391 U/L, GGT: 21 U/L, ALP: 237 U/L, PT: 31.2 sec, PTT: 43.1 sec, INR: 3.4. Laboratory evaluation repeated 6 hours later, which revealed worsening of the values, was as follows: hemoglobin: 8.3 gr/dl, white blood cell: 8300/mm3, platelet: 362000/mm3, AST>14000 U/L, ALT: 13853 U/L, total bilirubin: 1.7 mg/dl, total protein: 5.1 gr/dl, albumin: 3.5 gr/dl, glucose: 81 mg/dl, PT: 48.8 sec, aPTT: 44.2 sec, INR: 5.4. When the medication order was checked, it was shown that she had been administered paracetamol 5 times at a dose of 42 mg/kg (Perfalgan® 10 mg/ml, 100 ml flacon). The patient was started on N-acetyl cysteine (NAC) therapy immediately with an initial loading dose of 150 mg/kg over 60 minutes, followed by an initial maintenance dose of 50 mg/kg over 4 hours, and a final 100 mg/kg which was infused over 16 hours in the general pediatrics ward. Fresh frozen plasma, and erythrocyte transfusion was administered with an adequate glucose infusion and IV fluids. Twenty four hours after the paracetamol overinfusion, the serum paracetamol level was found to be 27.3 mg/L. Eight hours after the infusion of NAC, a repeat dose of fresh frozen plasma was infused to the patient to improve the prolonged coagulation tests (PT: 33.3 sec, aPTT: 40.7 sec, INR: 3.3). Twenty-four hours after the NAC therapy, coagulation tests were in the normal range (PT: 23.9 sec, aPTT: 36 sec, INR: 2.1). She was asymptomatic at the 36th hour of the NAC treatment and liver function tests completely recovered over 15 days. Patient’s serial liver enzyme values are shown in Figure 1. 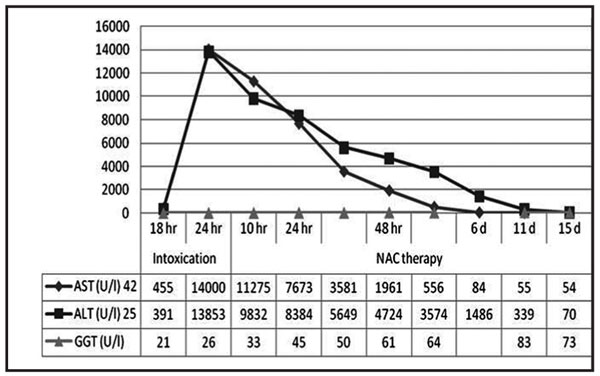 To date, several cases of inadvertent overdose of IV paracetamol have been reported most of whom were neonates and infants2-5. Clements and Prescott reported that the metabolism of paracetamol after oral and intravenous administration at normal doses is quite similar in volunteers, but it is unclear whether after intravenous overdose the liver would produce more or less of the reactive metabolite responsible for liver damage6.

The acute toxic dose of paracetamol is generally considered to be more than 150 mg/kg in children younger than 12 years. Treatment for patients who present after 24 hours from ingestion is controversial, as is treatment for patients with subacute, repetitive overdosing over several days. Osterhoudt et al, recommends treatment for children who receive more than 150 mg / kg / day for 1 to 2 days or more and/or patients with levels above 10 µg/ml who present after 24 hours from ingestion whereas Turkey National Poisons Information Service whose guidance (by using Poisindex®) suggests intervention with antidote following an overdose above 100 mg/kg/day7. It is also unclear whether risk of hepatotoxicity is the same for oral and IV dosing in terms of dose per kilogram body weight. Toxicology textbooks recommend using the Rumack-Matthew nomogram for the assesment after a single ingestion in order to estimate the severity of paracetamol intoxication in children. The treatment nomograms are based on an oral dose where absorption is likely to peak some time, possibly hours, after ingestion of the drug. However, this nomogram is not useful in the management of chronic exposures, nor has it been validated for use after ingestion of sustained-release acetaminophen or IV paracetamol products.

There is little data/guideline available on the administration and intoxication of IV paracetamol in children. Based on expert opinion, current UK advice is to lower the treatment threshold in patients following IV excess to 60 mg/kg body weight, or to use a concentration above the ‘50 mg/L at 4 h line’ (i.e. a parallel line to other nomograms but commencing lower) to initiate therapy on the basis8.

The use of IV paracetamol is potentially dangerous, because of therapeutic mishaps. Production of the pediatric form of IV paracetamol might be suggested to the drug industry to prevent from the errors due to the miscalculations. IV paracetamol should be carefully prescribed by health care providers. The treatment of NAC infusion over 21 hours was efficacious in a case of acute liver failure induced by IV paracetamol overdose. Nevertheless, pediatricians and toxicologists need a current nomogram to manage this challenging condition.

The authors report no declarations of interest.