Neurofibromatosis type 1 (NF1) consists the commonest phacomatosis, which are neurocutaneous syndromes of neural crest origin1 with minimal emphasis given, though, on the osseous abnormalities despite the fact that they constitute one of the seven diagnostic criteria for NF11,2.

A 50-year-old man presented with back and right lower leg pain of three-month duration. The pain was not associated with postural alteration of the truncus. Neurological examination revealed wasting of the right hip and decrease in extension and flexion of the knee (motor score 4/5). Bladder and bowel functions were normal. On physical examination, widespread café-au-lait spots, cutaneous neurofibromas (Figure 1A), and reddish brown spots on the iris (Lisch nodules) were noted, consistent with the diagnosis of NF-12. Moreover, there was a huge mass in the right gluteus area that was excised at a later time by the plastic surgeons (Figure 1A). 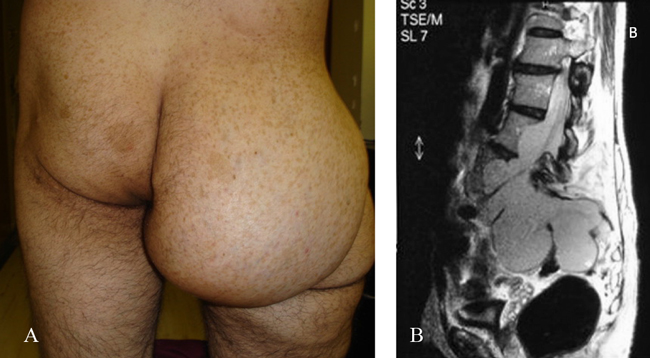 Computer tomography depicted an enlargement of the spinal canal and thinning of the laminae of the lower lumbar vertebrae and the sacral bone. Magnetic resonance imaging demonstrated a 12 x 14 x 10 cm meningocele originating from an enlarged right lumbar L1-L2 intervertebral foramen (Figure 1B), whereas facet joints and posterior longitudinal ligament were intact. Despite the impressive images, there were no symptoms or signs of spinal instability. Treatment of such a sizable meningocele was considered challenging, carrying an increased risk of neurological consequences, and thus it was decided to be treated conservatively. Four years later, the patient shows no signs of neurological deterioration while serial imaging demonstrated no significant changes.

NF1 is an autosomal dominant disorder with an incidence of 1 in 3,000 births2. Although bone dysplasia and scoliosis are common in patients with NF-1, meningeal defects are rarer. Meningoceles in NF1 are commonly associated with dural ectasia and herniation of the thecal sac through a defect in the lateral aspect of the vertebra or through the widened intervertebral foramen and when present, are usually intrathoracic. Large ones may be manifested with pain, sensorimotor deficits or dyspnea1,2. The rarity of this reported case is due to the location and the size of the meningocele.

The authors report no conflicts of interest.