Background: Childhood obesity poses a global health threat. We investigated the association of the cardiopulmonary exercise testing indexes with adipokines levels and insulin resistance along with the beneficial effect of physical exercise on insulin resistance in children.

Material and Methods: Thirty-two obese, 21 overweight, and 30 normal-weight children participated in the current study, with mean age 11.98 (±1.95), 10.91 (±1.72), and 11.35 (±2.21) years, respectively. All children were clinically healthy. The children and their parents provided data on physical activity, while spirometry and maximal cardiopulmonary exercise testing were performed for the functional evaluation of the respiratory status of the study population.

Conclusions: Leptin is significantly inversely related to VO2max in obese children. This study, however, allows further assumptions for adipokines and childhood obesity, along with the possible role of leptin as an additional obesity index in relation with cardiopulmonary function. HIPPOKRATIA 2017, 21(3): 124-129.

Obesity which is defined as abnormal or excessive fat accumulation in the adipose tissue threatens the health of the individuals1. Especially childhood obesity poses an evolving global health threat1. The obesity rate for children aged 6-11 and 12-19 years has increased since 1980 from 7 % to 20 % and from 5 % to 18 %, respectively2,3. However, in some western settings such as the US, Western Europe, Australia, and Japan, recent data suggest that levels of childhood obesity may have reached a plateau in the last decade4. This fact should not lead to complacency, as one-third of adults and almost 20 % of children and adolescents 2-19 years old are obese.

Excess body weight poses a health risk for premature morbidity and mortality. Diseases such as type 2 diabetes, dyslipidemia, hypertension, cardiovascular disease, and sleep apnea have recently become more common in children5. Circulating adipokines are correlated with obesity, and their levels have been related to insulin resistance6,7. Among them, leptin and adiponectin are the significant adipocytokines through which obesity exerts its clinical and metabolic effects7. Leptin which is mainly produced in the adipose tissue, acts on the hypothalamus, on receptors in the arcuate nucleus, to regulate appetite in order to be achieved energy homeostasis8. A decreased sensitivity to leptin has been noticed in obesity, resulting in an inability to detect satiety despite high energy stores9. Serum leptin levels were found elevated in obese children; besides, leptin levels decreased during the weight loss period10.

Aerobic Capacity with all its indices as derived from the maximal exercise testing, has been used as a prognostic factor in many conditions11-13. Especially the maximum quantity of oxygen (VO2max) that a person’s lungs consume during maximal exercise, has been recognized as the gold standard prognostic marker in several diseases. Shazia et al showed that obese young women presented lower aerobic capacity than normal-weight ones with lower VO2max values in the obese group14. Moreover, in a systematic review and meta-analysis on exercise tolerance in adolescents, Hansen et al marked a trend for lower VO2peak in obese adolescents than lean ones and highlighted the need for more studies in this field15.

The child’s cardiopulmonary capacity, as documented by the cardiopulmonary exercise testing (CPET) indexes, reflects the pulmonary, cardiovascular, muscle, and metabolic responses simultaneously under precise conditions of metabolic stress. The latter is also expressed via changes in adipokines levels, which might be associated with CPET indexes16.

We conducted a prospective study from 2009 until 2013 which enrolled 53 obese and overweight children who attended the Obesity clinic of the Endocrine Unit of the 3rd Department of Pediatrics of the Aristotle University of Thessaloniki at Hippokration General Hospital of Thessaloniki (overweight and obese groups) and 30 children with similar age and sex with the above two groups, who attended two different public schools in the city of Thessaloniki (normal-weight group). Normal-weight children were enrolled and participated in the study after they and their parents were informed about the study protocol, through an information leaflet that was sent to their schools. In total, 33 normal weight children accepted to participate in the study from the 123 children that were informed about it. The normal-weight group did not differ from the other groups regarding age and sex. Three normal weight children and two obese were excluded from the study. The exclusion criteria for the study were: a) chronic diseases, and b) failure to perform a cardiopulmonary exercise test.

The study was approved by the Bioethics Committee of the Medical School of Aristotle University of Thessaloniki (decision number: 91/21-12-2009), and a signed consent form by the guardian was obtained for each single child.

Spirometry and maximal cardiopulmonary exercise testing were performed at the Pulmonology Unit of the 3rd Department of Pediatrics.

We used the SECA scale, model 812 (S.No 06901304) to measure the children’s weight and the Holten Limited measuring rod (V/R, Veeder-Root, Crymych, Dyfed, UK) to measure their height. The growth curves for the Greek population designed by the First Paediatric Department of the University of Athens in 2000-2001, were used to determine the percentile of weight and height. 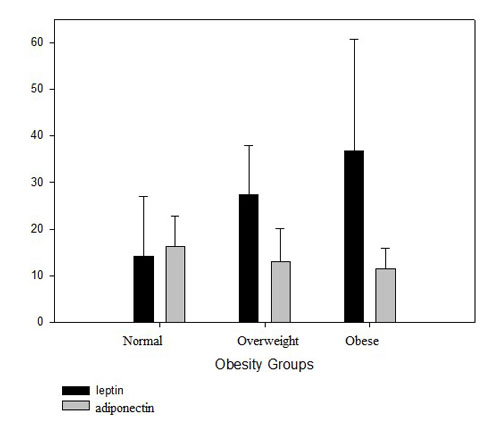 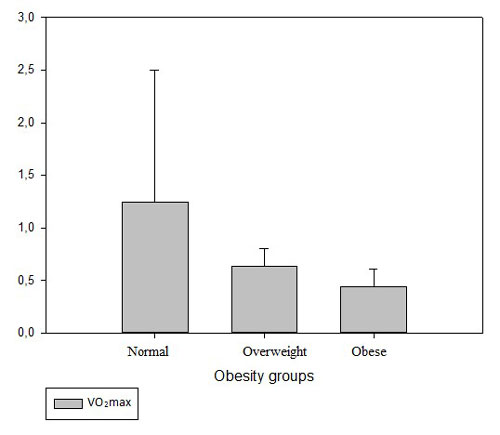 The main finding of the present study was that leptin was significantly inversely related to VO2max, adjusted for weight or height. This relation was subtle in overweight children and became evident in obese ones. Moreover, a documented, “organized” physical exercise duration of more than two hours weekly was associated with a lower HOMA-IR. Physical training may further exert its beneficial effect on health as documented by HOMA-IR index.

The VO2max associations with adipokines’ levels have been previously investigated and yielded contradictory results, mainly due to different research protocols. In the study of Unal et al, VO2max values were significantly higher (p <0.01) and leptin levels significantly lower in trained athletes21, while Yang et al showed that leptin levels after 24h of participating in an exercise bout of 65 % VO2max compared to 25 % were significantly higher22. Torjman et al did not find a change in serum leptin levels neither after short-term maximal exercise nor after four hours following long-term aerobic exercise at 50 % of VO2max23. Leptin levels have been positively correlated with BMI in both genders, but negatively correlated with VO2max only in men24. In the study of Paltoglou et al, baseline and post-exercise (at 70 % VO2 max) adiponectin was greater, and leptin and high-sensitivity C-reactive protein were lower in normal-weight than in obese pre- and early pubertal boys, authors concluding that leptin and adiponectin predict negatively and positively anti-oxidation, respectively25. Cardiopulmonary capacity studies in children are scarce, mainly because cardiopulmonary testing in children is particularly difficult and demanding, as the child’s cooperation is necessary to get maximum capacity.

In our study, leptin was significantly related to BMI only in obese children, while no associations were documented between these two adipokine levels and the insulin resistance. However, while several adipokines have been associated with obese and insulin-resistant phenotypes, a select group has been linked with insulin sensitivity, namely leptin, adiponectin. In the study of Plonka et al, the degree of body fat and the body composition (as expressed by BMI and other metabolic markers) were proportional to leptin concentration26. The increase of leptin levels in obese children normalized after weight loss, while leptin levels were associated with insulin resistance. In another study, all adipocytokines but TNF-a showed significant correlations (negative for adiponectin and positive for others) with clinical biomarkers of obesity and its complications: z-score for BMI, systolic and diastolic blood pressure. Adiponectin and leptin levels were also negatively and positively respectively related to central adiposity quantified by waist circumference. Leptin is the only adipokine associated with insulin resistance in children, while leptin, resistin, and IL-6 have been found to vary significantly different in obese children compared to normal weight controls27. The low physical activity in subjects with abdominal obesity has been independently and inversely linked to plasma leptin and insulin sensitivity.

There is also growing evidence that exercise exerts its beneficial effects partly through alterations in the adipokine profile; that is, exercise increases secretion of anti-inflammatory adipokines and reduces proinflammatory cytokines. In the present study, leptin levels were related to physical activity duration only in normal weight group, and HOMA-IR differed between the normal weight and obese children. Okazaki et al concluded that short-term and intensive exercise results in lower leptin concentration, regardless of changes in adipose tissue mass28. It has been found that there is a significant difference in physical activity levels between normal weight and obese/overweight adolescents.

Our results indicate that adipokines’ levels may reflect cardiopulmonary capacity and they could be markers of insulin resistance. However, the small number of participants in the present study, along with the fact that information on physical exercise in the present was based on parental and children reports, do not allow generalization of our findings. The number of the children who volunteered to cardiopulmonary testing was the main sample limitation. Moreover, outcomes might be different if there was a daily recording of exercise by independent observers. A limitation of the current study is the fact that the obesity status of the participating children was determined simply by using their BMI instead of performing a dual-energy X-ray absorptiometry (DEXA) scan. Another limitation is that currently there is a newer version of HOMA-IR available (can be accessed at the University of Oxford website).

In conclusion, this is the first study to the best of our knowledge that associates the VO2max with leptin and adiponectin in children. Innate difficulties in cardiopulmonary testing in children may account for data paucity in this age group. An interdisciplinary approach and excellent cooperation of the children is necessary. Our study allows further assumptions for adipokines and childhood obesity, along with providing information on the use of leptin as a possible additional obesity index in the future.

We thank our colleagues Kalliope Kontouli and Asterios Kampouras for assistance with the particular technique about cardiopulmonary exercise testing and Konstantina Kosta who provided insight and expertise that greatly assisted this study.

The authors have no conflict of interest to report.