Background and aim: Νon-motor symptoms in Parkinson’s disease (PD) are very common and contribute to the severity of patient’s disability. We evaluated the frequency of nonmotor symptoms in patients with PD and we explored the influence of disease characteristics on the presence of these symptoms.
Patients and methods: One hundred sixty six patients and sixty six matched controls were enrolled in the study. The Non-Motor Symptoms Questionnaire (NMSQuest), a 30-item self-completed questionnaire, was used for the evaluation of nonmotor symptoms.
Results: Non-motor symptoms were more common in PD patients than controls. Mean ± SD NMSQuest score was 6.76 ± 4.22 in PD patients and 5.44 ± 4.45 in controls (p=0.035). The more common non-motor symptoms in PD patients were urinary urgency (54.3%), nocturia (51.8%), constipation (45.7%) and sadness (42.1%). There was a correlation between NMSQuest score and severity of the disease.
Conclusion: Non-motor symptoms in PD are too important to remain undetected. By incorporating into every day practice the use of suitable, reliable questionnaires, we will be able to facilitate detection and management of these symptoms.

The purpose of our study was the evaluation of occurrence of non-motor symptoms in Greek patients with Parkinson disease and the assessment of the influence of different disease characteristics on the presence of nonmotor symptoms.

Sixty six matched healthy subjects served as the control population (NC). Informed consent was obtained from both patients and controls.

PD patients completed a demographic questionnaire including age, gender, education and pertinent information about the disease (age at onset, duration of disease, type of treatment). Clinical assessment was made using the Hoehn and Yahr stage classification system7.

The NMSQuest4 was used for the evaluation of nonmotor symptoms. This is a 30-item self-completed questionnaire for comprehensive indication of presence or absence of non-motor symptoms in PD. The items of the NMSQuest are grouped to nine domains: gastrointestinal (8 items), urinary tract (2 items), sexual function (2 items), cardiovascular (2 items), apathy/attention/memory (3 items), hallucinations/delusions (2 items), depression/anxiety/anhedonia (2 items), sleep/fatigue (5 items), pain (1 item) and miscellaneous (3 items). For each item there is a yes or no answer.

A. Clinical and demographic data

Thirteen patients were untreated and the rest were receiving levodopa or/and a dopaminergic agonist. The mean daily levodopa dose was 506.19 ± 250.2 mg and the mean duration of treatment 5.7 ± 4.66 years.

All subjects completed the NMSQuest successfully.Reliability analysis of NMSQuest items revealed a satisfactory Cronbach’s alpha of 0.778. Half of NMSQuest items showed an optimal item to total correlation coefficient, only item No 6 (fecal incontinence) and No 30 (delusions) showed a very weak correlation and the rest a moderate one. Intraclass correlation coefficient of the test /retest total NMSQuest score was 0.74 (p=0.000), slightly above standard level. Therefore, scale reliability reached acceptable levels9. 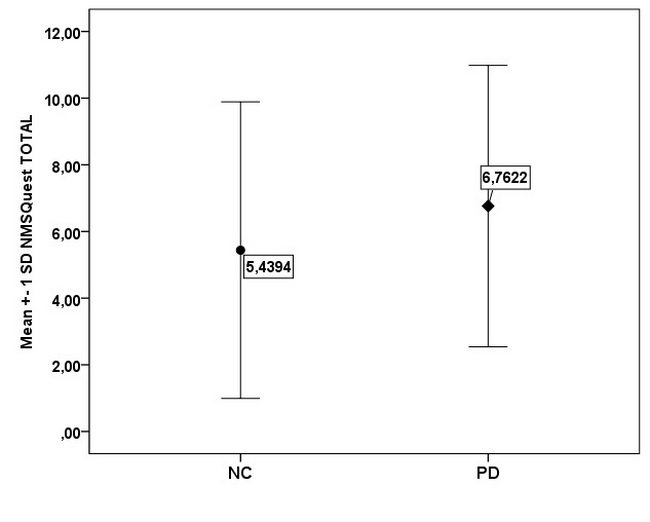 Comparisons of the differences regarding the frequencies of positive answers, more specifically the presence of each one of the nonmotor symptoms, in PD and controls are shown in Table 1. Nine symptoms were found significantly different with drooling, taste / smellloss, constipation and urination related problems yielded the lowest p values.

The impact of disease severity on NMSQuest total scale is presented in Figure 2.There is a gradual significant increase of mean NMSQuest score as the disease progresses (p=0.001). For a detailed exploration of differences between patients in relation to disease severity, the PD patient population was divided in two subgroups according to stage .One group comprised of patients with mild form of the disease (stage 1 & 2; 66.7%) and the other of patients with a moderate to severe disability (stage 3 & 4; 33.3%). In Table 2 differences between the two groups regarding the positive answers in all items of the NMSQuest are presented. Significant difference in relation to frequency of non-motor symptom appearance was observed in the following symptoms between the two groups: swallowing difficulties, incomplete bowel emptying, sexual interest loss, dizziness, falling, restless legs, leg oedema, sweating and double vision. Figure 3 highlights the items with significantly high proportion of positive answers in relation to stage of the disease. 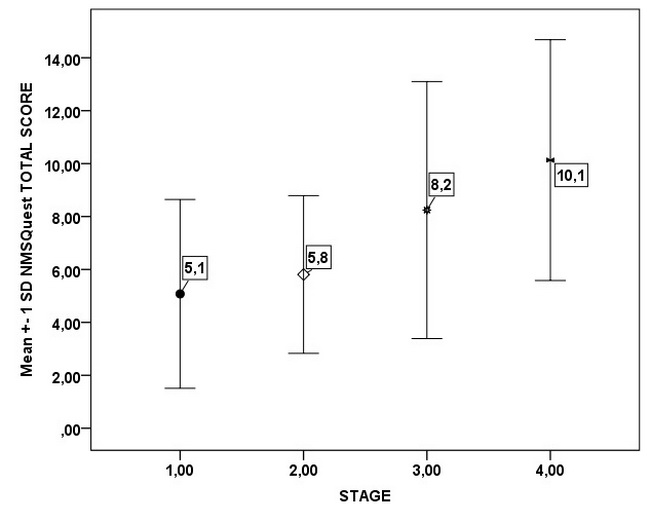 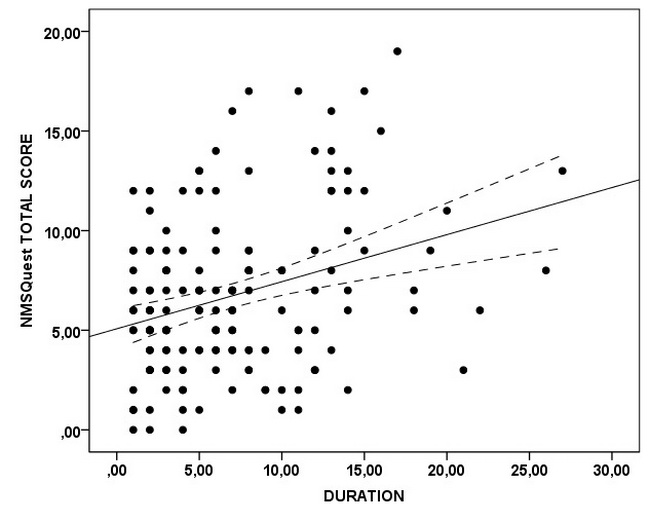 Non-motor symptoms are an important aspect of PD but remain under-recognized and often undeclared. This under-recognition of the non-motor symptoms may reflect the tendency of neurologists, patients and families to focus on the motor symptoms and to ignore the non-motor symptoms. Shulman et al3 found that the diagnostic accuracy for the caring neurologist was low for depression, anxiety, fatigue and sleep disturbance. Chaudhuri et al10 reported that the frequency of the undeclared nonmotor symptoms range from 33.2% (diplopia) to 65.2% (delusions). The most frequently undeclared symptoms were delusions, daytime sleepiness, vivid dreams and dizziness. Finally, according to Gallagher et al11 many symptoms that PD patients possibly perceive as embarrassing or unrelated to the disease remain under-reported.Cheon et al12 examined the patient awareness of non-motor symptoms associated with PD. The average number of symptoms that patients knew to be associated with the disease was 5.2 ± 6.8. This low patient awareness may account for the low detection rates of NMS. The least known non-motor symptoms that the patients were unaware to be related to PD were delusions, bowel incontinence and parasomnias.

In our study the median NMSQuest total score was 6 and the mean ± SD was 6.76 ± 4.22. Three complete prevalence studies of non-motor symptoms have been reported in the literature4,13,14. In the NMSQuest validation study4 the median NMSQuest total score was 9,while the mean ± SD NMSQuest total score in a large international multicenter study13 was 10.3 ± 5.4, ranging from 9.28 ± 4.3 in Italy to 12.71 ± 5.7 in Israel. In the PRIAMO study the mean (SD) number of non-motor symptoms per patient was 7.8 (4.9). Compared with the aforementioned studies our patients’ MNSQuest score was lower. This finding of our study can be explained by differences in the study populations, since in our study the majority of our PD patients wasat comparatively milder stages of the disease compared with the patients of the aforementioned studies.

Nine symptoms were found significantly different between our patients and controls, but among them drooling, taste / smell loss, constipation and urination related problems yielded the lowest p values. Krishnan et al16 comparing non-motor symptoms in PD and age-matched controls reported that these symptoms were more frequent in PD patients and cardiovascular, mood/cognition and perceptual/hallucinations problems were more related to PD than aging.

We found that the total NMSQuest score significantly increased with disease severity and duration meaning that the number of individual non-motor symptoms reported by our patients increases as the disease progresses. This correlation with disease severity was reported also in the NMSQuest validation study4 and in a large International study13 where patients with disease duration of ≥ 15 years had the highest total NMSQuest score. Characteristically, Hely et al17 in the Sidney Multicenter Study of PD reported that non-motor symptoms dominate the clinical picture of patients who survive 15 years from the diagnosis. Especially cognitive decline, hallucinations, depression, symptomatic postural hypotension and urinary incontinence were the most frequent ones. The frequency and severity of the non-motor symptoms with the progression of the disease is consistent with the current neuropathological studies of motor and non-motor symptoms in PD according to the Braak’s hypothesis18. However, the neuropathological and neurochemical basis for many non-motor symptoms remain unknown. Many neurotransmitters and lesions in different anatomical regions have been implicated reflecting the multisystem nature of the disease. The pathological hallmarks of the disease are the loss of the dopaminergic neurons in the substantia nigra, causing dopamine depletion in the striatum, and the presence of Lewy bodies in the surviving neurons. However, a-synuclein deposition, neuronal loss and Lewy bodies are found not only in substantia nigra but also in other brain regions (locus coeruleus, raphe nucleus, pedunculopontine nucleus, olfactory bulb, dorsal motor nucleus of the vagal nerve, nucleus of Meynert and cerebral cortex) and as well as in the parasympathetic and sympathetic post-ganglionic neurons19,20.

In conclusion, non-motor symptoms in PD are too important to remain undetected. By incorporating into every day practice the use of suitable, reliable questionnaires, we will be able to facilitate detection and management of these symptoms. Furthermore, since a considerable number of the non-motor symptoms involve other organ systems e.g. genito-urinary, circulatory or digestive, it is noticeable that their presence might act as an inviting point for other specialties to join forces with neurology for a more multidisciplinary approach in the treatment of PD patients.

The authors would like to thank Prof. Pablo Martinez-Martin for his cooperation in this project.