Currently, there are 16 known Mycoplasma species isolated from humans, excluding the occasional animal Mycoplasmas that have been detected. Mycoplasmas are usually found in immunosuppressed hosts, and Mycoplasma pneumoniae (M. pneumoniae) was the first disease-causing Mycoplasma discovered in humans and is the leading cause of community-acquired pneumonia (CAP) in children. M. pneumoniae is the smallest known free-living microbe. The lack of a cell wall in this microbe does not allow for Gram-staining and makes this microbe insensitive to beta-lactam antibiotics. Originally described as benign respiratory commensals, the Mycoplasmas have been associated with a widening clinical spectrum and are a common cause of respiratory tract infections (RTIs) in children. Mycoplasmas are found in approximately 40% of the children infected with CAP, and of these, 18% of the patients require hospitalization1.

The patients in the present prospective study were selected from among children who were hospitalized from 1st January 2006 to 31st December 2010 in the Department of Respiratory Disease in the Children’s Hospital affiliated with Soochow University. Children with clinical symptoms of community-acquired RTIs (rhinorrhea, sore throat, cough, fever, wheezing, chest pain, tachypnea, and dyspnea) were eligible for enrollment, while those with a history of chronic lung disease, underlying immunodeficiencies or pre-existing cardiac, renal, neurological or hepatic dysfunction were excluded from the study. A total of 8,157 cases ranging in age from 1 month to 14 years were enrolled: 4,890 males (59.95%) and 3,267 females (40.05%); the ratio of males to females was 1.50:1. The study protocol was approved by the Institutional Review Boards of Soochow University, and informed consent was obtained from the parents or legal guardians of each child before enrollment.

Upon hospital admission of the patients, pediatricians completed a questionnaire regarding the age of the patient, the date of onset of the disease, the clinical symptoms, the laboratory findings, and the potential presence of underlying disease. Patients who had clinical symptoms of lower RTIs underwent chest radiography. Chest radiography was performed using standard equipment and radiographic techniques and was reviewed by the radiologists in digital format. Meanwhile, each patient’s serum (4 mL) was obtained for complete blood counts, C-reactive protein concentrations, and platelet detections. According to the clinical findings, the children were diagnosed as having the following: 1) upper respiratory tract infections (URIs), with rhinorrhea, sore throat, and a normal chest radiograph when it was performed and without rales; 2) bronchiolitis in patients less than 2 years old, with the first episode of wheezing, with or without moist rales, with chest radiographic evidence of hyperinflation of the lung; 3) bronchitis, with cough and unfixable rales, with a normal chest radiograph; 4) pneumonia, with cough and fixable rales, with an abnormal chest radiograph including flaky, lobar or diffuse pulmonary infiltration; 5) severe pneumonia, with which patients required mechanical ventilation.

Nasopharyngeal aspiration (NPA) fluids were collected from all of the subjects within 24 hours of admission before beginning antibiotic therapy; sera samples were obtained on admission, whereas convalescent serum specimens were taken one week later, usually on the day of hospital discharge. The specimens were preserved in standard transport media at 4 ºC and transported to the Department of Clinical Virology and Microbiology Laboratory for study.

Two mL samples were obtained from the children and then shaken and centrifuged. The supernatant was taken from the samples, and lysis buffer was added to extract the DNA, which was then amplified by PCR primers and probes. Real-time PCR was performed on the samples to identify the P1 adhesion protein gene of M. pneumoniae, according to a previous study6. The forward and reverse primers were 5’-CCA ACC AAA CAA CAA CGT TCA-3’ and 5’-ACC TTG ACT GGA GGC CGT TA-3’, respectively, and the probe sequence was (FAM)–5’-TCA ACT CGA ATA ACG GTG ACT TCT TAC CAC TG-3’-TAMRA. The fluorescent reporter dye at the 5’ end of the probe was 6-carboxy-fluorescein (FAM), and the quencher at the 3’ end was 6-carboxy-tetramethyl-rhodamine (TAMRA). A 21 μL PCR master mixture (Shenyou Bio Technology, Shanghai, China) containing the primers and probes was combined with 3 μL of the sample DNA and 1 µL of the GoTaq® DNA Polymerase (Promega, Wisconsin, USA) for the PCR reactions. Real-time PCR was performed using the iQ5TM BIO-icycler (BIO-RAD, California, USA), and the cycling conditions were as follows: 2 min at 37ºC; 10 min at 94ºC; 40 cycles of 10 s at 94ºC, 30 s at 55ºC and 40 s at 72ºC. Quantification curves were plotted using several concentrations of control plasmids consisting of the target gene.

The specific IgM and IgG antibodies against M. pneumoniae were detected in the serum samples of patients using a commercial ELISA kit (Serion ELISA classic M. pneumoniae IgG/IgM, Institute Virion\Serion, Würzburg, Germany), according to the manufacturer’s instructions. Evidence of acute M. pneumoniae infections was defined as either a single positive serum IgM titer (cut-off 13 U/mL) or a 4-fold increase in the IgG titer of convalescent serum.

Values are expressed as percentages for discrete variables or as the mean and standard deviation or 95% confidence intervals for continuous variables. Clinical characteristics and laboratory variables were compared using the Student t-test, the Mann–Whitney U-test, the χ2 test and Fisher’s exact test. The relationship between meteorological factors and the number of cases caused by different pathogens was determined using Spearman rank correlations. Meanwhile, stepwise regressions were conducted independently to determine the relative contribution of different meteorological factors. A two-sided value of p < 0.05 was considered statistically significant. All of the analyses were performed using the Statistical Package for SAS for windows, version 8.2 (SAS Inc., Cary, NC, USA). 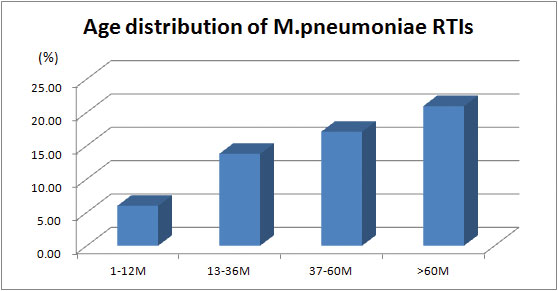 From 2006 to 2010, the annual distribution of M. pneumoniae infections was 13.40%, 5.39%, 6.36%, 14.58%, and 13.99%, respectively. There was a significant difference between different years and seasons (Table 1). M. pneumoniae infections were detected throughout the year and mainly occurred from May to November of each year; this period included the autumn and summer seasons, with an epidemic month (June 2010) exhibiting a maximum infection prevalence of 25.97% (Figure 2). 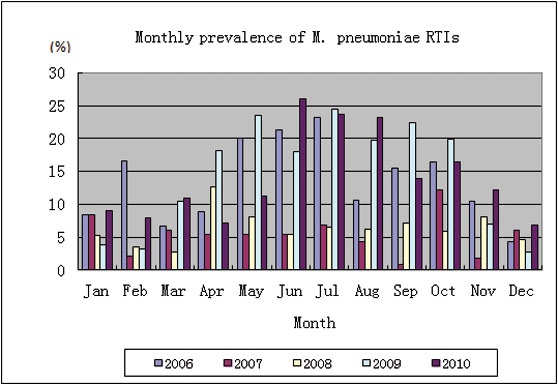 Figure 2: Monthly distribution of M. pneumoniae infection among children hospitalized with respiratory tract infections from January 2006 to December 2010. M. pneumoniae infection can be detected throughout the year and mainly occurs from May to November in each year, (autumn and summer respectively) with epidemic month (June 2010) up to 25.97%.

Demographic data, clinical characteristics and laboratory findings of single M. pneumoniae infections and co-infections with the most important viruses

Thanks to the improved diagnostic methods and the increased attention clinicians pay to the importance of the pathogen in recent years, the detection rate for M. pneumoniae infections among 8,157 children with community-acquired RTIs reached 11.2% in our study. Numerous epidemiological studies have shown that M. pneumoniae infection rates vary between 1.3% and 50% and that the infection rates during epidemic periods can be more than 50%7. In our study, the infection rate reached 25.97% during the epidemic month of June 2010. Differences between studies may be attributed to community outbreaks during the study periods and differences in the applied methods and the rigidity of diagnostic criteria. Differences may also result from the diversity of climate and geography in the study areas, as well as human activities. In the present study, the combination of serology and PCR was used for diagnosis. This combination is highly sensitive, achieving 95% to 100% detection2,8, while the sensitivity of PCR alone is 75% and that of μ-capture ELISA is 66.7%2. This study shows that the rate of M. pneumoniae infections in Suzhou from 2007-2008 was significantly lower than in 2006, 2009, and 2010, indicating that 2007 and 2008 were non-epidemic years. Rasmussen et al9 used PCR to monitor the M. pneumoniae infection situation and found that the epidemic year of M. pneumoniae in Denmark was 2004-2005, which was followed by a low positivity rate of approximately 3% from 2007-2009. The estimated national incidence of PCR-diagnosed M. pneumoniae infections in 2010 rose from 0.4 per 100,000 in week 34 to 3 per 100,000 in week 41, which indicated the possibility of a new epidemic. Nevertheless, in different regions, epidemics occur in different years.

This study also shows that M. pneumoniae was epidemic in the summer, followed by the spring and autumn seasons. Thus, from May to November of each year, the positivity rate of M. pneumoniae infections was high; this result similar to that of a study performed in Italy10. Unlike endemic disease, which may not demonstrate marked seasonal occurrences, outbreaks of M. pneumoniae infections in countries with temperate climates are generally thought to tend to occur in the summer or the early fall when the occurrence of other respiratory pathogens is usually lower1. Therefore, M. pneumoniae activity and climate are closely related. Denmark, Iceland and other regions have reported that M. pneumoniae is more common in the autumn and winter seasons, with an especially high rate in the winter11,12. Therefore, it is assumed that the different epidemic characteristics of M. Pneumoniae are attributed to different regional climates, even though the infections occur during the same season.

This study shows that the total number of white blood cells in children with M. pneumoniae infections alone did not increase. Additionally, neutrophils were the dominant cellular infiltrate observed, accounting for 52.9%, and CRP was increased. These findings are consistent with the findings of Esposito et al (N% = 66 ± 17%, CRP = 53 ± 83 mg/L)21. In the co-infection group, neutrophil percentages and CRP were lower than in the single M. pneumoniae infection group, suggesting that the viruses that co-infected with M. pneumoniae may play an important role in pathopoiesis.

The five-year monitoring of M. pneumoniae infections in Suzhou indicated that M. pneumoniae is a common respiratory tract pathogen in children with RTIs. M. pneumoniae can be detected throughout the year and has a unique seasonality. Co-infection with viruses is common in children with RTIs. In addition, meteorological factors, especially the temperature, play an important role in epidemics of M. pneumoniae infections. Understanding the pathogen’s epidemic characteristics and clinical features can facilitate the early detection of possible respiratory diseases and the early prevention and suitable treatment of RTIs in children.

Yan YD is co-first author due to equal contribution to this manuscript.

Authors have no conflict of interest.