Shoulder arthroscopy (SA) is an appealing alternative to open surgery due to its minimally invasive nature. It is rarely associated with neurovascular complications, which may include damage to the axillary vessels and the brachial plexus1,2.

A 64-year-old lady presented with syncope and left shoulder pain a day following arthroscopic subacromial decompression and capsular release. Her past medical history was significant for hypothyroidism, osteoporosis, and fibromyalgia. Physical examination revealed bruising from the left hemithorax down to her thigh. Investigations demonstrated a significant drop in her hemoglobin compared to pre-operative levels. Urgent computed tomography (CT) of the thorax revealed a 3.8 x 3.5 cm left axillary pseudoaneurysm (APA) with a large intramuscular hematoma of the chest and abdominal wall. Angiography via the right femoral artery confirmed the diagnosis. A 7 x 50 mm Viabahn covered stent was deployed, and completion angiography demonstrated the exclusion of the pseudoaneurysm with excellent flow through the stent (Figure 1). The patient was discharged the following day and remains symptom-free at twenty-four months. 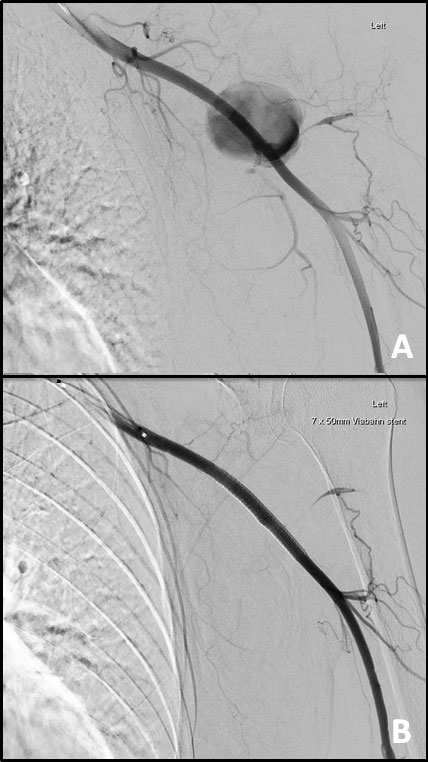 Axillary pseudoaneurysms are rarely encountered and require a high index of suspicion. They can be of iatrogenic or traumatic and may be associated with injury to the brachial plexus. In arthroscopy, they may result from portal placement, direct damage from arthroscopic instruments and from regional anesthesia3,4.

Open repair of APAs is hindered by the difficulty in obtaining vascular control to arrest bleeding and the risk of injury to adjacent structures, particularly the brachial plexus. Endovascular methods have thus emerged as an appealing alternative. We proceeded with endovascular repair for two reasons; it is associated with a faster recovery and fewer neurovascular complications, whilst it can be combined with completion angiography to ensure aneurysm exclusion and adequate distal blood flow.

There is a paucity of data regarding the durability of endovascular repair of APAs, and therefore it is uncertain whether these patients will need re-intervention, an important consideration in young patients with good life expectancy. The patient has therefore been put on a surveillance programme and will be followed-up closely. It should be noted that a short covered stent was used to preserve an adequate length of graft anastomotic sites if open surgery is needed in the future.

With this brief clinical case, we aim to bring to the attention of your readership a rare but life-threatening complication of a common procedure, that requires a high index of clinical suspicion and timely intervention.