Myotoxicity of local anaesthetics is a well-described phenomenon since 19591. Local anaesthetics have been proven to cause reversible myonecrosis in clinical concentrations2-6. Muscle damage has been observed few hours after the injection and was characterized by disruption and condensation of myofilaments, lytic degeneration of the sarcoplasmic reticulum and mitochondria and pycnotic changes of the myonuclei, with pathologically condensed chromatin7. However, sarcolemma remains undamaged, indicating an intracellular pathologic process. Alterations of Ca2+ homeostasis, induced by local anaesthetics, in combination with enhanced oxidative stress, have both been found to be major causes of myonecrosis. Interestingly, the damage is limited to muscle fibres and has a sparing effect to the precursor “satellite cells”. The latter permits the full recovery of the muscle6-8.

Previous studies, examining histopathologic changes, using both light and electron microscopy noticed that muscle damage had a reversible course and muscles had fully recovered after a period of 4-6 weeks9,10. Similar results of muscle regeneration appeared after muscle infiltration with clinical doses of ropivacaine5. However, these conclusions rose from studies evaluating microscopic images without simultaneous quantification of morphologic characteristics.

The aim of the present study wasto evaluate muscle regeneration after ropivacaine injection, based on morphometric criteria, compared to muscles injected with normal saline. Regenerated muscles were studied regarding various types of muscle fibres and their morphologic characteristics, as cross-sectional area and perimeter.

All experiments were conducted in accordance with the European Communities Council Directive of November 24 1986 (86/609/EEC) and the “Principles of laboratory animal care” (NIH publication No. 85-23, revised 1985) and were approved by the Animal Care and Use Committee of the National Veterinary Institute and the Ethical Committee of the School of Medicine, Aristotle University of Thessaloniki.

Sixteen male Wistar Rats, weighting 160-190g, were used in the study. All experimental animals housed two individuals per cage, on a 12/12 h light/dark cycle (lights on, at 7 am) at a controlled temperature of 21±1 °C with low noise and humidity, throughout the whole study. Animals had ad libitum access to food and water.

Intramuscular punctures were performed with 7G needle in all groups. The needle penetrated the distal part of the muscle, reached the tibia perpendicularly and then it was advanced longitudinally for 3 mm, across the long axis of the muscle, pointing to its median part. After aspiration, the solution was slowly injected, distributing the local anaesthetic along the belly of the muscle. After completion of the injections, rats were left to recover and then they were put back in their home cages.

Six weeks later, the animals were sacrificed with a lethal dose of chloral hydrate 4.5% w/v. Next, the right and left tibialis anterior muscles were carefully dissected, immersed in melting isopentane, frozen in liquid nitrogen and stored in -80°C. Muscles were then cut in a cryo-microtome (Microm 505 E) in transverse sections of 10 µm thick. Two transverse sections were obtained from the belly of every dissected muscle. The sections were stained with acid myosin-ATPase (pH = 4.6) and examined under light microscope (Zeiss Axioscope).

Then the sections were subjected to morphometric analysis. For this purpose, the image obtained from the light microscope was transferred to a PC, equipped with special image analysis software (KS 300 Imaging System Release 3.0). The image field transferred to the PC screen (optical field) composed of 768 x 576 pixels. At a magnification of 100x (using eyepiece 10x and objective lens 10x), each optical field corresponded to an area of 837 x 628 µm.

Eight optical fields, which followed a meander configuration in the centre of the belly, were examined in every transverse section. Provided that two transverse sections were cut from the belly of each muscle examined, a total of sixteen optical fields were evaluated in each muscle. All muscle fibres, appearing in cross-section in these sixteen optical fields, were examined, regarding the type of muscle fibres, the fibre cross-sectional area and its perimeter. For the estimation of fibre type composition, fibre types were distinguished by the differential staining resulting from pre-incubation at pH 4.6. The method distinguishes type IIa (light staining) fibres from type I (dark staining) and type IIb (medium staining) fibres11. Moreover, in order to avoid false results in qualification and quantification of each experimental group muscle fibre types, all observations were made only in the central area of the muscle belly, avoiding the poles and the superficial areas, thus minimizing conflicting results due to regional differences in muscle fibre type composition.

All experimental animal groups were comparable, regarding animals’ weight (p>0.05). Under light microscope, type I muscle fibres of groups HC and LC had hypertrophic appearance compared to type I SL group fibres. However none of the sections examined presented any signs of necrosis or inflammation (Figure 1). The percentages of various types of muscle fibres among groups showed no significant differences (Figure 2). 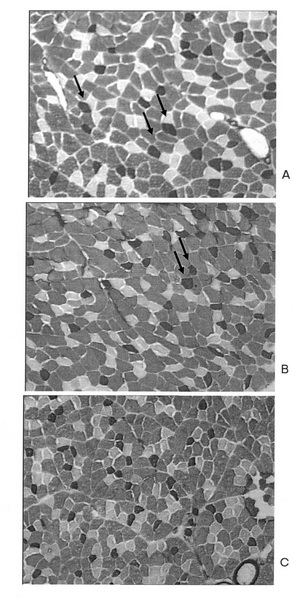 Figure 1: Muscles stained with myosin-ATPase (after preincubation at pH=4.6). Type I fibres are stained dark, type IIb are the most lightly stained, while type IIa fibres are characterized by an intermediate appearance. Type I fibres of groups HC and LC have a hypertrophied appearance, compared to SL group (arrows). A: HC fibre, B: LC fibre, C: SL fibre. Acid ATPase, 100x. HC: High Concentration of ropivacaine group, 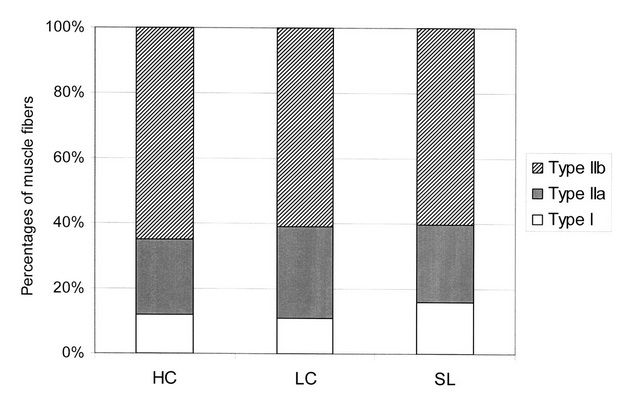 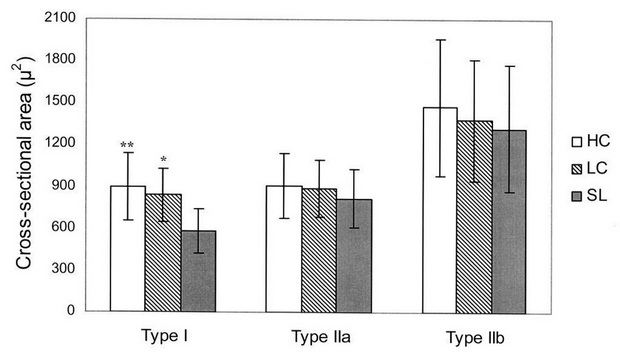 Mean cross-sectional areas and standard deviations of all fibre types among groups are shown in Figure 3. Statistical analysis revealed greater cross-sectional area for type I fibres in both HC and LC groups, compared to SL group, while type IIa and IIb fibre comparisons among groups did not reveal any differences. Regarding HC vs. LC comparisons for type I fibres, no differences were observed.

Pairwise comparisons of mean cross-sectional perimeters and standard deviations of all fibre types revealed significant greater perimeter of type I fibre in group HC and LC muscles, compared to SL group. Differences between type IIa and IIb fibre perimeters were not observed (Figure 4). 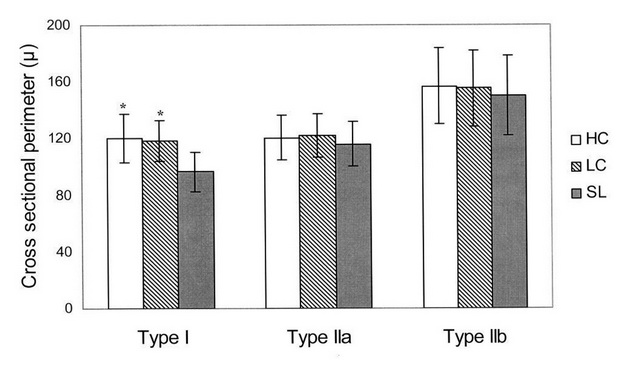 After a period of six weeks following local anaesthetic infiltration, ropivacaine injected muscles demonstrated ratios of various muscle fibre types comparable to control muscles. Therefore, myotoxic insult of ropivacaine and subsequent regeneration process didn’t seem to induce changes in fibre type composition. However, evaluation of the mechanisms of muscle damage has showed intracellular Ca2+ homeostasis derangement and previous histopathologic studies have confirmed isolated damage in muscle fibres with preservation of neural structures. Hence, absence of alterations of regenerated muscle, expressed as muscle type fibre composition, should be anticipated7,9. Analysis of muscle fibre composition of extensor digitorum longus, after bupivacaine injection, has revealed an increase of type I fibres compared to control muscles, observed until 180 days after injection12. Based on the above data, different mechanisms must be considered, in order to explain discrepancy in the results between Rosenblatt and Woods work12 and the present study.

Despite rather uniform muscle damage, previous studies have demonstrated differences among various local anaesthetics, regarding the magnitude of necrosis6,13. Hence, bupivacaine tended to evoke the most serious muscle injury, while ropivacaine has been shown to cause slightly less severe damage. Authors concluded that differences in lipophilicity between the two local anaesthetics are mainly responsible for the different extent of muscle lesions while within a time period of 28 days, muscle regeneration had been completed13. However, the present study revealed that ropivacaine, in the same doses used by Zink and colleagues13 didn’t lead to alteration in the ratio of different muscle fibre types. In another study however, bupivacaine actually did alter this ratio12, suggesting differences in the mechanism of toxicity between the two local anaesthetics and its long-term impact on muscle regeneration.

It is well known that muscle innervation is a predominant determinant in muscle fibre type composition14. However, both bupivacaine and ropivacaine have been proven to be neurotoxic, in equipotent concentrations15. Moreover, apart from muscle fibres, bupivacaine injection has also shown to affect neuromuscular junction and significantly delay its recovery in comparison to muscle fibre regeneration16. Bupivacaine has also been found to influence neurotrophic factors expression, during experimental muscle damage17. According to these data, bupivacaine may induce more prolonged perturbations in nerve impulses to the regenerating muscle than ropivacaine14 and different mechanisms in nerve-induced muscle regeneration between the two local anaesthetics could explain the observed differences in muscle plasticity.

The present study revealed ropivacaine induced morphologic transformation of regenerated type I fibres, compared to control animals. Both HC and LC rats showed type I fibre hypertrophy, expressed as greater cross-sectional area and perimeter. These findings are in accordance with previous studies. Rosenblatt and Woods measured an increased cross-sectional area of type I fibre, 40-60 days after injection, whereas at the same interval period, type II fibres showed no differences in comparison with the control group. Authors considered these changes as permanent since type I fibres remained hypertrophic up to 180 days after injection12. On the other hand, the local anaesthetic concentration of the solution didn’t seem to influence this process since no differences between HC and LC were recorded, despite the fact that ropivacaine generally produces less severe damage5. Selected type I muscle fibre hypertrophy is a quite rare entity and few data are available in the literature about the underlying mechanisms of this morphologic variation. Consequently, further studies are needed in order to clarify the underlying cellular mechanisms and the subsequent possible functional impairment.

Despite extensive use of muscle infiltration, either for pain control or for peripheral nerve blockade, the clinical significance of muscle toxicity is still debated. While some consider it as a factual adverse effect with long term consequences, others claim that it is a temporary and completely reversible damage on the muscle functionality in the process of an effective anaesthetic intervention13. The goal of eliminating it either by the use of toxicity-modifying pharmaceutical agents or by the designing of more appropriate molecular structures of local anaesthetics remains challenging and aspiring. The present study contributes to the histopathologic details of this damage that could hopefully lead to the delineation of the corresponding mechanisms of muscle toxicity.

In conclusion, under light microscope, regenerated rat muscles after infiltration with myotoxic doses of ropivacaine showed long-term hypertrophy of type I muscle fibres, despite generally “normal appearance”. However, regenerated muscles are characterized by comparable ratio of various muscle fibre types with control ones, suggesting that despite its profound myotoxic effect, ropivacaine failed to influence muscle plasticity.

Authors declare no conflict of interest regarding this paper.