Background: The inherited dysfibrinogenemias comprise rare congenital coagulation disorders which are clinically characterized by bleeding diathesis and, in occasional patients, by thrombotic tendency or combined bleeding-thrombotic events. In recent years, accumulating evidence suggested that fibrinogen has a critical role in the pathogenesis of neuroinflammatory disorders, including multiple sclerosis. We describe the presentation and long-term follow-up of a patient with inherited dysfibrinogenemia and concomitant clinical and laboratory evidence of demyelinating disease. Case description: A 16-year-old male patient presented in 2003 with bilateral sensory symptomatology preceded by an episode of epistaxis. His past medical history included episodes of spontaneous nosebleeds as well as Duane syndrome and mild atrophy of the right upper limb. Coagulation testing of the patient and his asymptomatic father revealed in both the presence of a clotting defect, consistent with inherited dysfibrinogenemia (named Fibrinogen Thessaloniki). Within seven months, the patient presented with a new episode of motor semiology whereas serial brain magnetic resonance imaging (MRI) scans revealed T2 lesions with bilateral distribution, some of which with gadolinium enhancement. The cerebrospinal fluid examination disclosed the presence of oligoclonal bands in the central nervous system compartment. The patient was started on azathioprine (2.5 mg/kg/24h) which led to clinical and radiological stabilization for nine years. In 2013, the dose of azathioprine was reduced, due to an elevation of his amylase levels, resulting in radiological deterioration with an increased T2 lesion load. The reinstitution of azathioprine at therapeutic doses led to radiological improvement and clinical stability as of today. Conclusion: The described case of inherited dysfibrinogenemia and concomitant multiple sclerosis provides speculative evidence for a causal link, rather than a chance association, between these two entities. Further studies are warranted to corroborate this hypothesis in experimental and clinical settings. HIPPOKRATIA 2017, 21(1): 49-51.

Fibrinogen is a 340-kDa protein that is critically involved in normal hemostasis by promoting clot formation, platelet aggregation, and fibrinolysis1. Structural abnormalities of the fibrinogen molecule result in rare congenital or acquired disorders of fibrinogen function which are collectively known as dysfibrinogenemias. Clinical manifestations of dysfibrinogenemia include a bleeding diathesis2 (which may become manifest during trauma or surgery) and occasionally a proclivity to thrombosis (including coronary heart disease and deep vein thrombosis)3,4.

We present the case of a 16-year-old patient with inherited dysfibrinogenemia and multiple episodes of focal central nervous system dysfunction of autoimmune origin that responded favorably to long-term immunosuppressive treatment.

In July 2003, a 16-year-old patient was admitted to the 3rd Department of Neurology reporting right facial numbness along with left upper and lower limb numbness, which were preceded by an episode of epistaxis.

His past medical history was notable for occasional nosebleeds since childhood, a congenital right sixth nerve palsy, attributed to Duane syndrome, as well as mild global atrophy of the right upper limb and congenitally dysplastic right thumb. A magnetic resonance imaging (MRI) examination disclosed a Gadolinium (Gd)-enhancing T2 lesion in the left cerebellar peduncle as well as areas of increased T2 signal in the left internal capsule, the lentiform nucleus, and the thalamus. The patient was subjected to follow-up MRI-magnetic resonance angiography (MRA) imaging five days later, and the findings were attributed to minor ischemic stroke, probably secondary to vasculitis.

The patient was started on clopidogrel 75 mg/24h, that was discontinued after four days due to significant epistaxis, and was referred for coagulation testing. The results of repeated examinations performed two months apart, revealed consistently low fibrinogen levels (ranging from 70.1 to 103 mg/dl; normal values: 200-400 mg/dl), and prolonged thrombin time. In view of these findings, the patient and his asymptomatic father were evaluated for dysfibrinogenemia (studies performed by Dr. D. Galanakis, Stony Brook University, Stony Brook, USA) and the findings are summarized in Table 1. These findings suggested that plasma fibrinogen from both father and son showed a modest clotting defect, consistent with inherited dysfibrinogenemia (named Fibrinogen Thessaloniki). 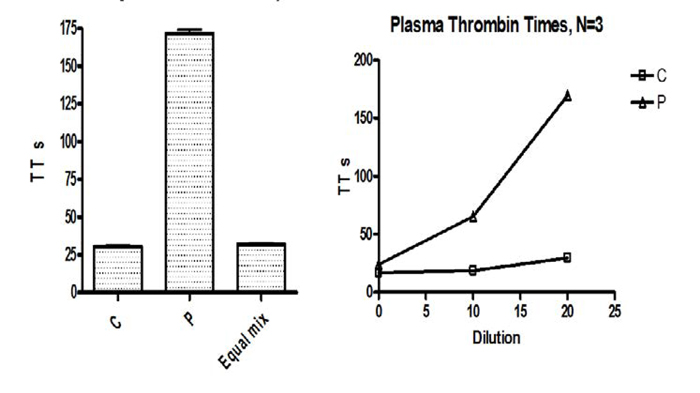 Seven months later, the patient developed an episode with sudden onset of left lower limb weakness that resolved after eight days. A brain MRI scan depicted a Gd-enhancing lesion with increased T2 and diffusion weighted imaging (DWI) signal in the posterior limb of the right internal capsule as well as other T2 lesions in the left semiovale center. These findings were interpreted as suggestive of demyelinating disease. Accordingly, a lumbar puncture was performed prior to which four units of fresh frozen plasma were transfused, to avoid any hemorrhagic complications. The cerebrospinal fluid (CSF) examination was notable for the presence of IgG Oligoclonal bands (OCBs) whereas CSF IgG index was within normal range. Other CSF findings were unremarkable, and antibody testing for infectious agents, including Cytomegalovirus, Herpes simplex virus, Epstein-Barr virus, Toxoplasma gondii and Borrelia burgdoferi was negative.

Follow-up brain MRI examinations revealed the presence of new periventricular T2 lesions bilaterally, one of which with Gd-enhancement. It is worth noting that the clinical episodes of transient neurological dysfunction, as well as the appearance of new T2 lesions on brain MRI, were preceded by episodes of epistaxis. Although a diagnosis of multiple sclerosis was reached on the basis of clinical and laboratory evidence of immunologically-mediated, transient neurological dysfunction disseminated in space and time, we refrained from treating the patient with the at that time only-available injectable agent, due to co-morbid dysfibrinogenemia. Instead, the patient was started in September 2004 on azathioprine with a maintenance dose of 2.5 mg/kgr/24h (i.e., 150 mg/24h) and remained symptom-free and radiologically stable for nine years (Figure 2). 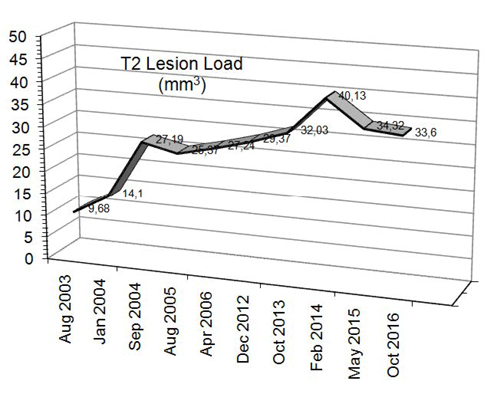 Figure 2: Serial measurements of T2 lesion load in brain MRI scans. The contouring of demyelinated plaques was performed using an image analysis software (ImageJ, 1.45, National Institute of Health, USA). The total volume of Τ2 lesions (mm3) was calculated as the sum of the volumes of individual lesions.

In October 2013, the dose of azathioprine was reduced to 50 mg/24h, due to an elevation of his amylase levels. In the following four months, two brain MRI scans disclosed radiological deterioration with an increased T2 lesion load (Figure 2). The reinstitution of azathioprine at the initially prescribed dose in February 2014 led to radiological improvement and clinical stability as of today. It should be noted that following the commencement of azathioprine therapy, numerous episodes of epistaxis occurred. However, in contrast to the pre-azathioprine period, they were dissociated from clinical or radiological evidence of central nervous system (CNS) involvement.

We describe a rare case of inherited dysfibrinogenemia who suffered multiple, immune-mediated episodes of focal brain dysfunction and presents significant challenges from a diagnostic and, to a lesser extent, therapeutic point of view. In principle, the described coagulation disorder could be either spuriously correlated to the neurological symptomatology of the patient or causally linked to it, directly or indirectly.

The spurious association between the two entities cannot be totally ruled out but seems unlikely in the light of the low prevalence characterizing both disorders. Indeed, less than 300 families with congenital dysfibrinogenemia have been described, and therefore a chance association with multiple sclerosis is relatively unlikely. In addition, epistaxis, which is a classical manifestation of dysfibrinogenemia, preceded canonically the episodes of neurological malfunction. This observation implies a temporal association between the two phenomena although the exact mechanisms underlying the particular association are currently obscure.

An alternative scenario is that the CNS lesions are a direct result of dysfibrinogenemia. Again, this possibility is unlikely for a number of reasons: First, the majority of cases with dysfibrinogenemias (approximately 50 %) are associated with bleeding diathesis2. However, in our patient, there was no evidence of brain hemorrhage at a macroscopic level. On the other hand, the possibility of cerebral microbleeds could not be entirely excluded as our MRI protocol included T2*-weighted gradient-recalled echo imaging but not susceptibility weighted imaging (SWI), which is particularly sensitive for detecting blood products5,6. Second, another 40 % of cases are asymptomatic whereas the remaining 10 % exhibit thrombotic or combined thrombotic-bleeding tendencies7. Fibrinogens associated with an increased risk for thrombosis include fibrinogens Marburg, Caracas V, Oslo I, Naples etc8-10. However, in the case of our patient, thrombin time was significantly prolonged, which is expected in subjects with bleeding tendencies. Since the brain lesions of our patient were not consistent with hemorrhagic stroke, the pathological properties of fibrinogen Thessaloniki cannot possibly explain the associated neurological manifestations.

A third possibility is that the coagulation disorder triggered the episodes of immune-mediated neurological dysfunction. The autoimmune basis of the patient’s neurological syndrome is supported by converging lines of evidence including the CSF presence of OCBs, the brain MRI findings, the clinical and radiological stabilization following the institution of immunosuppressive medication and the relapse following the tapering of azathioprine. One can only speculate about the mechanism underlying the association between dysfibrinogenemia and brain autoimmunity. In recent studies, fibrinogen has been identified as a novel molecular signal that triggers rapid perivascular microglial responses and contributes to axonal damage in numerous neuroinflammatory diseases, including multiple sclerosis11.Further, experimental studies indicate that, upon disruption of the blood-brain-barrier (BBB), fibrinogen promotes autoimmunity and demyelination via chemokine release and antigen presentation12. The exact mechanism of BBB disruption in the described case is unclear, but one possibility involves the occurrence of cerebral microbleeds, which escaped detection by the employed MRI protocol (vide supra), and resulted in the extravasation of fibrinogen. In the light of the emerging, critical role of fibrinogen and fibrinolysis in neuronal inflammation, it is conceivable that, upon BBB disruption, a defective fibrinogen could impact or trigger the autoimmune mechanisms ultimately leading to demyelinating lesion formation. This hypothesis warrants further experimental and clinical study.