Skip to content
hippokratia.gr > Volume 17 (2013) - Issue 1 > Diagnosis and Genetic Counseling for Friedreich’s Ataxia: A time for consideration of TP-PCR in an Indian Setup

Friedreich’s ataxia (FRDA) was named after Nicholaus Friedreich of Germany1. Among the various types of ataxias, FRDA is the most common hereditary ataxia with an estimated prevalence of 1:50,000-1:29,0002. Progressive, unremitting ataxia that is mostly accompanied with clumsiness of gait is the principle characteristic of FRDA3. The onset of the disease is usually around puberty, but there is a clinical variability of about 2-3 years of age. In a case of late onset, FRDA may occur at the later age of 25 years2.

The genetic defect in this disease has been assigned to chromosome 9q13-q21, FXN4 with the expansion of a GAA triplet repeat in the first intronic region being responsible for the disease phenotype. Approximately 95% of individuals with FRDA have expanded GAA triplet-repeat mutations in intron 1 of FXN on both alleles while 5% of individuals have an expanded GAA repeat mutation in the disease-causing range in one FXN allele and an intragenic inactivating FXN mutation (i.e. a point mutation or exon deletion outside of the GAA repeat region) in the other allele5. These individuals are designated as “compound heterozygotes”.

Clinical diagnosis of FRDA is difficult as the clinical picture overlaps with Charcot-Marie-Tooth, ataxia with a Vitamin E deficiency and others6. Therefore, genetic testing plays a critical role in accurate diagnosis, which in turn will lead to better management of patient and genetic counseling for family7.

The gold standard of genetic testing for FRDA is Southern blot. Short PCR is used for the detection of alleles in the normal range and long PCR is used for expanded alleles8. A new methodology called triplet repeat primed PCR (TP-PCR) has been described for screening of expanded alleles in the FRDA gene. TP-PCR was developed by Warner et al. for screening the CAG repeat expansion in myotonic dystrophy and it was implemented in FRDA diagnosis by Schmitt et al9,10. It provides a characteristic peak pattern which confirms the existence of expanded triplet repeats in the FRDA gene8.

The present study aims to explore the value of using TP-PCR in accurate diagnosis of FRDA patients and its utility for genetic counseling in the present setup with the Department of Genetics, Sanjay Gandhi Post Graduate Institute of Medical Sciences, in Lucknow, India. Genetic counseling is the process through which knowledge about the genetic aspects of illnesses is shared by trained professionals with those who are at an increased risk of either having a heritable disorder or of passing it on to their unborn offspring. The aim of this report is to illustrate the potential usefulness of genetic testing and simultaneous genetic counseling in preventing the disease by using data on the families of probands who have been referred to us.

Sample: 2 mL of blood was collected in EDTA vial from 37 individuals (30 patients and 7 family members along with written informed consent. DNA extraction was accomplished by QIAamp DNA Mini Kit (Qiagen, Valencia, CA). The quality and quantity of DNA was assured by agarose gel electrophoresis and spectrophotometer respectively.

TP-PCR: TP-PCR assay was executed with the primers described elsewhere11. The reaction was carried out in a volume of 25 µL with P1, P3 and P4 primers in the concentration of 20 pmol, 20 pmol and 2 pmol respectively, along with 50 ng of Genomic DNA, 200 µM of dNTPs and 1U of Taq Polymerase. The temperature profile adopted in cycling was 1 min at 94oC, followed by 30 cycles of 94oC for 30 sec, 60oC for 30 sec, 72oC for 1 min and one cycle of 72oC for 10 minutes. Amplification was confirmed by observing shearing of the amplified product on 1.5% agarose gel after the run. For fragment analysis 2 µl of amplified product was added to 10 µl of Hidi-formamide and 0.5 µl of LIZ 500. This mixture was denatured for 5 minutes at 95oC followed by rapid cooling in ice and analyzed in ABITM 310 genetic analyzer.

Representative results from our study using TP-PCR are shown in Figure 1. Of all the samples tested, 81% were confirmed as FRDA by TP-PCR. The remaining 19% samples were confirmed as negative for GAA repeat expansion. However 3.3% of the cases were found as heterozygous as suggested by short and long range PCR (Figure 2). These patients are likely to harbour inactivating mutations in the other allele. 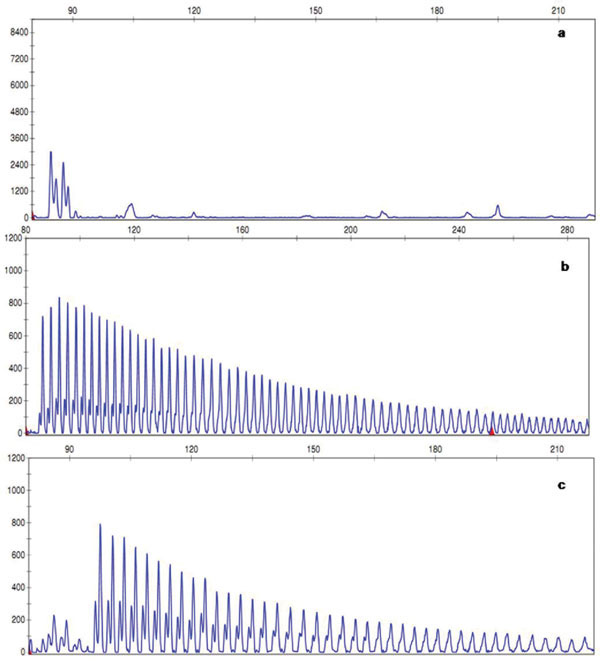 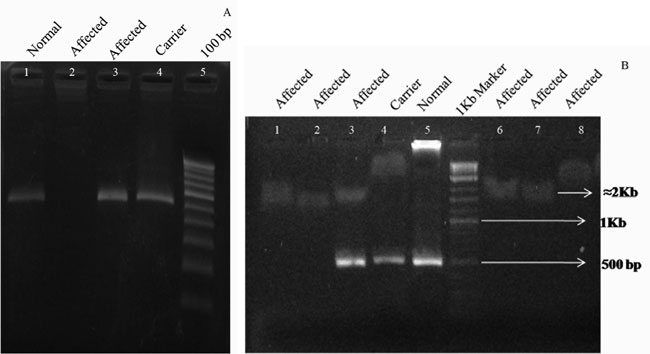 Figure 2: A) Short PCR: In lane 1, 3 & 4 bands were observed within normal range (above 500). Lane 1 was from a normal individual, lane 3 was an affected heterozygous individual and lane 4 was from a carrier individual. In lane 2 absence of band confirms homozygous expansion. B) Long PCR: Lane 1, 2, 6, 7, 8 were samples from an affected individual (homozygous expansion), whose band size are above 1.5Kb. Lane 3: heterozygous affected individual with two bands, one in normal range (500 bp) and another band nearly 2Kb. Lane 4: Carrier individual, two bands observed one in normal range, another above 8kb. Lane 5: Normal individual observed with band of about 500bp.

The screening for another 7 individuals of the extended family showed that 4 of them were positive for GAA expansion in the TP-PCR. Further analysis of this sample with short and long range PCR confirmed them as heterozygous for the GAA expansion. The pedigree of the family is shown in Figure 3. For these family members, genetic counseling was offered and they decided to undergo premarital screening.

Figure 3: A) Pedigree of Family 1: Mother (I.I) and (I.II) father were healthy carriers with an allele positive for GAA expansion. Among the siblings, elder daughter (II.I) was a healthy carrier, son (II.II) had a GAA expansion in normal range and younger daughter (II.III) was positive for GAA expansion in both the alleles and presented with clinical symptoms for FRDA. B) Pedigree of family 2: Mother (I.I) a healthy carrier, father (I.II) was deceased and genotyping data was unavailable. Among the siblings, the elder son (II.I) was affected and compound heterozygous for expansion.

FRDA is the most common autosomal recessive ataxia. The identification of GAA repeat expansion is relevant in confirmatory diagnosis as well as in extended family screening (carrier status identification) as these individuals are at high risk of having their children affected by FRDA and can benefit from follow-up recommendation by premarital screening.

Molecular diagnostic tests are imperative for the clinical and prenatal diagnosis. The molecular diagnostic tests are also helpful in carrier detection. Routine molecular diagnostics involves a traditional PCR, amplifying the repeat region followed by agarose gel electrophoresis whereas the gold standard is southern blotting to determine the size of the repeats for FRDA. However, the larger expanded alleles get frequently missed by these traditional PCR approaches and southern blotting is a very cumbersome and expensive method for routine diagnostics. TP-PCR method has many advantages and suits well especially for rapid handling and testing of few samples as required in routine laboratory practice since the method is PCR-based, rapid, and not labor intensive. The analysis can be done using a small amount of DNA. It is a closed tube system that does not require post-PCR handling, and has a high sample throughput. Our study also has revealed that TP-PCR is much more reliable for the detection of expanded repeats in FRDA.

In conclusion, TP-PCR qualifies as a highly reliable, sensitive and robust technique which overcomes the shortcomings of a traditional PCR by detecting the very large expanded alleles of even >5 kb accurately. It can be easily set up in any laboratory as is evident from our study and will help in better genetic counseling of these families.

We authors do not have conflicts of interest.