Background/aim: Cricotracheal separation is a rare injury with fatal results in most cases. Clear guidelines are not available and several dilemmas are to be faced during patient management in such cases.
Description of case: We present a case of cricotracheal separation with multiple cricoid fractures in a 16-year-old male with blunt neck trauma.
Conclusion: Early recognition based on an index of clinical suspicion is necessary in order to establish this rare diagnosis. Intervention should preserve the laryngeal function as much as possible.

Cricoid fractures and cricotracheal separation are rare conditions but challenging for the physician since airway obstruction and acute hemorrhage that may rise are critical and require early recognition and effective management. Often, externally the neck may seem intact, or with minimal bruising and airway distress may be surprisingly mild. Several dilemmas may be faced throughout the different stages of patient management.

A 16 year old male was admitted to our Emergency Department after a motorbike accident. He was intubated in the accident area and presented with lower facial trauma, neck abrasions and surgical emphysema of the neck. A clear image of a laryngeal fracture was not present in the CT scan. The injuries’ mechanism and clinical findings raised suspicion for laryngeal perforation and an immediate surgical neck exploration was decided.

Via a transverse standard tracheostomy incision a gap of approximately 2 cm was recognized between the cricoid cartilage and the trachea (figure 1). The cricoid cartilage had sustained a comminuted fracture resulting in three loosely attached pieces. A laryngotracheoplasty was performed and a Montgomery T-tube was used as a stent. 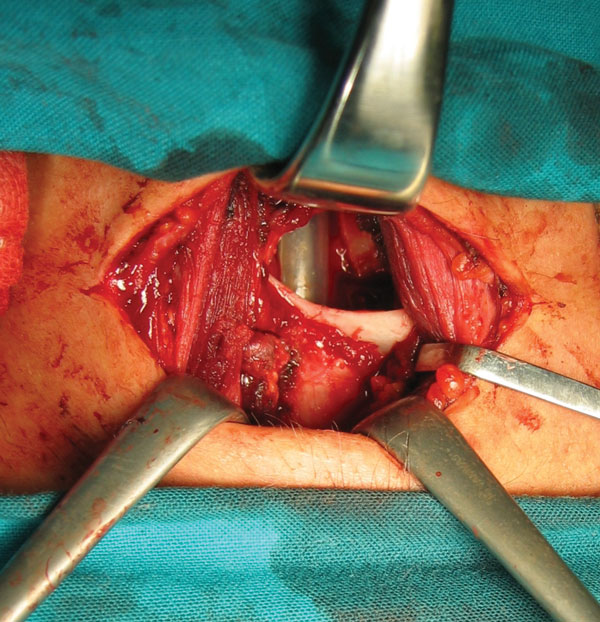 Figure 1. Intraoperative view of the 2 cm gap between the cricoid cartilage and the trachea.

Transnasal fiber-optic laryngoscopy at the 3rd postoperative day demonstrated immobility of the right vocal cord in the paramedian position and ventral dislocation of the right arytenoid cartilage. One month later full function of the left vocal cord was noted. In a nine month follow up appointment stenosis was not observed and the T-tube was removed (figure 2). 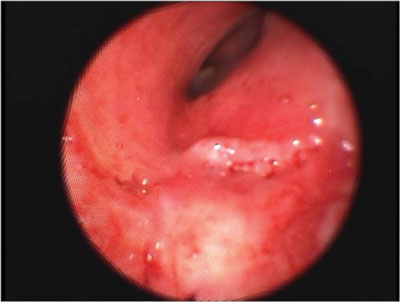 Symptoms such as clothesline bruising, acute dyspnea, hemoptysis, stridor, subcutaneous emphysema, dysphonia, dysphagia and inability to tolerate supine position should alert the clinician in suspecting this kind of traumas1.

When acute respiratory distress is present airway maintenance should be the primary concern. There is controversy as for airway management. Some authors advocate that endotracheal intubation, with a small tube and with minimal neck manipulations is the best solution, while others believe that a tracheostomy under local anesthesia holds less risk of further damage2.

If the airway seems stable one could proceed on further examinations such as laryngoscopy, oesophagoscopy and CT scans2. Sometimes endoscopy may not be diagnostic because of distorted anatomy or small tears working as a valve. In other cases a CT scan may not be possible to perform as often patients with neck traumas cannot tolerate the supine position. The method of choice depends on the patients’ general condition.

Clinical suspicion based on symptoms and signs remain the most important means in early identification of a cricotracheal separation. In many cases a definitive diagnosis requires a surgical exploration of the neck3. Clinicians should always have in mind that a normal respiration should not reassure them that the airway is intact. Even in cases of total laryngotracheal disruption the patient may have established a temporary and highly unstable airway through the soft tissues and cervical or pretracheal fascia3.

Once cricotracheal disruption has been identified or is strongly suspected decisions have to be made regarding the timing of intervention. Early operation is associated with a lower incidence of stenosis and has obvious advantages in terms of trauma manipulation but there are reports suggesting a three to five day delay for lesser edema4.

Stabilization and support of the laryngotracheal framework can be achieved by using a stent after reconstruction. Duration of stenting varies in reports from three days to one year depending on the injury extent and co-morbidities. However stenting seems to work when stay in place for at least 6-8 weeks as granulation formation and fibrous tissue start to develop not immediately but within the first month post-trauma5. The presence and extension of granulation tissue determines the longer duration of stenting as seen in our case.

Long term sequelae following laryngeal injuries include permanent tracheostomy and impaired vocal cord function. Gussack et al in a review of 414 patients with laryngotracheal trauma reported poor airway results in 17% and poor voice results in 21%6. The formation of granulation tissue and airway stenosis may lead to inability to decannulate. However delayed recovery has been reported and thus it is important to wait at least for a period of 6 months to a year before performing any kind of rehabilitation procedure7.