Methods: Twenty four LURT were performed in our center in the last 10 years. The mean recipients and donors age was 41.7 and 47.2 years, respectively. As LURD spouses (n=17) and extended family members (n=7) were accepted predominantly. All donors went through careful psychological evaluation in order to confirm emotional relationship. The final decision was taken after both the recipient and the donor signed a consent in front of a judge. A quadruple sequential immunosuppressive protocol was used in all recipients. The 5-year Kaplan Meier graft survival rate, HLA mismatch, rejection episodes, delayed graft function, serum creatinine and Glomerular filtration rate-Modification of the diet in renal disease (GFR-MDRD) were analyzed. The results were compared with 30 living related renal transplants (LRT) performed during the same time with mean recipients and donors age of 35.9 and 58.5 years, respectively.

Conclusion: The authors present an excellent 5-year graft survival rate in both LURT and LRT recipients. Therefore, LURT could ameliorate the severe organ shortage in the region and could be recommended as a valuable source of organs in the countries with developed and underdeveloped deceased donor donation.

Despite the efforts for more deceased organ donations in the last years, living renal transplantation is still the predominant transplant activity in most countries of the the Balkan region. The reasons are various: recent civil wars, closed borders, political insecurity, social and economic crisis, poverty, no suitable legislation and lack of understanding and real support from the health authorities in some of the countries in the region. Due to the severe organ shortage, we started developing the so called expanded criteria living donor program which includes use of elderly, marginal, unrelated (emotionally related) and ABO incompatible living donors. Despite the ethical dilemmas, the unrelated donors are nowadays widely accepted even in developing countries, with confirmed excellent graft and patients survival1,2. After our knowledge living unrelated renal transplantation (LURT) is not sufficiently present in the Balkans area. The aim of the study is to present our 10-year experience with living unrelated donors as an underestimated but valuable source of kidneys in the Balkan region.

Since the changing of the legislation regarding living renal donation, 24 living unrelated renal transplantations are performed in our center in the last 10 years. As unrelated donors we accepted predominantly spousal donors (n=17) but also other extended family members (brother in law 2, father in law 1, mother in law 4, n=7). All donors went through careful psychological evaluation by certified psychologists for confirmation of emotional relationship and signed a consent form in front of a judge. They are definitively accepted as kidney donors after Hospital Ethics Committee approval. The mean recipients and donors age was 41.7 (range 28-66) and 47.2 (range 25-62) years, respectively. The results were compared with 30 living related renal transplants (LRT) performed during the same time. The related donors were predominantly parents (27, or 90%) and sisters (3, or 10%). The mean age of the LRT recipients and donors was 35.9 (range 17-48) and 58.5 (range 40-79) years, respectively (Table 1).

All recipients underwent a standard surgical procedure. An end-to-end arterial anastomosis with the internal iliac artery which is the local preference and end-to-side venous anastomosis with the external iliac vein were performed. The total vascular anastomosis time was approximately 35 min. Cold ischemia time (CIT) was approximately 3 h while warm ischemia time (WIT) was under 3 min (Table 1). The preservation was performed predominantly with Euro-Collins and HTC solution. Ureterocystoneostomy was performed according to the Lich Gregoire procedure.

The usual quadruple sequential protocol according to our policy was introduced in all patients. The ATG induction was applied predominantly in LURT group whereas IL-2R antagonists (Basiliximab or Daclizumab) in LRT. All of the recipients were on standard triple drug CSA and MMF based therapy. Rejection episodes were treated usually with steroid pulse therapy for cellular rejections and plasmapheresis and rituximab for humoral rejection.

The mean follow up for recipients was 81.4 and 79.6 months for LURT and LRT groups respectively which is not statistically significant. There was a significant difference regarding recipients and donors age (41.7 and 47.2 for LURT and 35.9 and 58.5 years for LRT transplants), HLA mismatch (5.07 and 2.9 for LURT and LRT groups) and rejection episodes (16% vs. 13% in LURT and LRT recipients). The 5-year Kaplan Meier graft survival rate was excellent in both groups (83 and 81%, respectively) while patients survival rate was 98% and 97%. There was no significant difference in the creatinine level (129.13 vs. 121.2 μmol/lit) and Glomerular filtration rate-Modification of the diet in renal disease (GFR-MDRD) (56.6 and 58, 6 ml/min) between the groups after 5 years of follow up (Table 2).

Excellent 5-year Kaplan – Meier graft survival was observed in both, LURT and LRT recipients (83 vs. 81%), (Figure 1),which is confirmed by other authors3-6.Similar results were obtained analyzing the 5 years serum creatinin (129, 3 vs. 121.1 μmol/l) and GFR-MDRD (56.6 vs. 58.6 ml/min) for LURT and LRT, respectively. The possible negative effect of superior HLA mismatch in LURT recipients (5.07 vs. 2.9 in LRT) was probably neutralized by more younger donors in the LURT compared with LRT group (47.2 vs. 58.5 years) and low frequency of DGF (8.3 vs. 13.3%), respectively. The higher DGF rate in LRT recipients could be explained by the use elderly living kidney donors in this group according to our clinical practice7. Regarding rejection episodes we demonstrated acceptable percentage in both, LURT and LRT recipients (16 vs. 13%), respectively, a statistically significant difference which did not however have any impact on the 5 years graft survival rate. All of the rejection episodes were treated successfully by steroid pulse therapy. There was only one episode of humoral rejection in a LURT patent that was successfully treated with plasmapheresis and rituximab. The authors confirm a beneficial effect of a quadruple sequential immunosuppression to which the excellent results obtained in this study are attributed. The developing of LURT is of special importance for the Balkan region because it provides a solution for patients in end stage renal failure and will thus help deter from transplant tourism. The transplant professionals should know that there is practically no country in the Balkan area where organ trafficking is not illegal, but despite the prohibitive legislation, very well organized transplant tourism trips to countries in the Far East (Pakistan, India and lately Egypt) still exists. End stage renal disease and lack of deceased donor transplantation have important socioeconomic consequences in the region bearing in mind that most of the Balkan countries are still underdeveloped and far from the EU standards8-9. 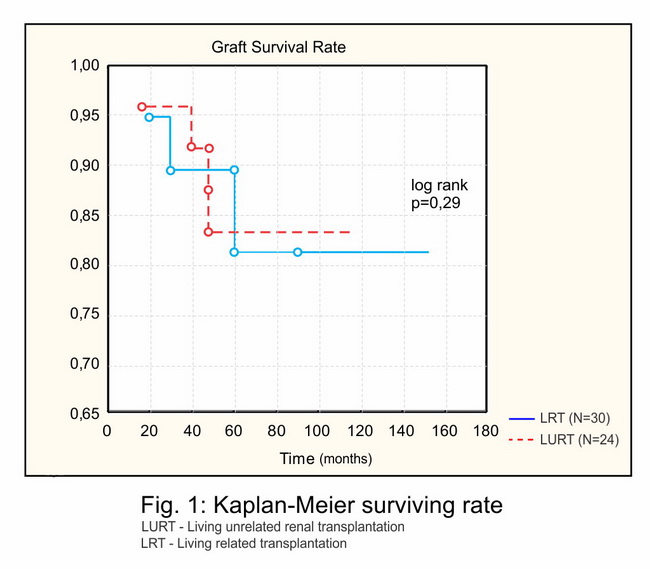 Figure 1: Kaplan-Meier 5-year Graft Survival Rate for LURT (interrupted line) and LRT (continuous line). There is no statistical difference in the survival curves after 60 months of follow up between the two groups of recipients. LURT: Living unrelated transplantation, LRT: living related transplantation.

In summary, the authors present excellent 5-year graft and patients survival rate in both LURT and LRT recipients. We therefore conclude that unrelated living renal transplants could ameliorate the severe organ shortage in our region and could be recommended as a valuable source of organs for both countries with developed and underdeveloped deceased donor donation.