Background: The term Amyand’s hernia refers to a rare clinical situation characterized by the presence of a normal or inflammed appendix within the sac of an inguinal hernia. The situation may be asymptomatic or may present as an incarcerated hernia in case of strangulation or acute appendicitis occurring inside the hernia sac.
Description of the case: We present the case of a right Amyand’s hernia on a 88-years-old male that presented to our emergency department with a severely tender and swollen inguinal mass that was diagnosed as a strangulated inguinal hernia – inguinal abcess and underwent emergency operation. The intraoperative findings included a severely inflamed and perforated appendix along with healthy part of the caecum inside the sac. Appendectomy with subsequent primary hernia repair without mesh was performed with excellent outcome.
Conclusion: Because of the fact that most of such rare cases are managed by urgent surgery with no preoperative diagnosis, every surgeon should be prepared for the possibility of coping with such an unexpected situation.

A normal or inflamed vermiform appendix found inside an inguinal hernia sac is called Amyand’s hernia, in honour of the surgeon Claudius Amyand who first reported this interesting entity in 17351.

Amyand’s hernias usually present on the right side due the normal anatomic position of the appendix. In rare cases that can be associated with situs inversus, malrotations of the intestines and mobile caecum, an Amyand’s hernia may appear on the left side2.

The management of Amyand’s hernias is still a subject of debate and should be individualized depending on the operative findings and co-morbidity factors. The most widely accepted classification that epitomizes operative findings and management is the one by Losanoff and Basson which describes 4 distinct types. In type 1, a normal appendix is found within an inguinal hernia. In this case hernia reduction with mesh repair and appendectomy (unless contraindicated) is the treatment of choice. Type 2 includes an inflammed appendix within an inguinal hernia, without signs of peritonitis and abdominal sepsis. Appendectomy through herniotomy with primary repair of hernia with Bassini or Shouldice technique (no mesh) is proposed. In type 3 where peritonitis and abdominal sepsis co-exist, a laparotomy, appendectomy and peritoneal lavage and subsequent hernia repair without mesh is indicated. Finally in type 4, some other abdominal pathology exists simultaneously. A laparotomy in terms of identification and treatment of this pathology should be performed. Appendectomy and hernia repair without mesh should follow4.

The aim of this report is to present a rare and very interesting case of a clinically incarcerated inguinal hernia which proved to be intraoperatively an Amyand’s hernia with pus and a necrotized appendix within it.

The patient was taken to the emergency operating room and at exploration, after suction of pus, a perforated appendix was inside the severely inflammed and partially ruptured hernia sac along with part of the caecum and omentum. All adhesions were released and appendectomy, resection of: a) inflamed parts of omentum, b) necrotized fatty tissue of spermatic cord, and c) most of hernia sac (Figure 1), through the herniotomy was performed. We did not consider laparotomy to be necessary because of the fact that the perforation was limited within the inguinal area and the pre-operative presentation of the patient was not indicative of peritonitis. No mesh was placed in fear of postoperative complications such as wound infection or appendiceal stump fistula. Instead a Bassini procedure was performed. No local irrigation with antibiotic as proposed by some authors5 was applied. A vacuum suction drain was placed in the subcutaneous tissue. 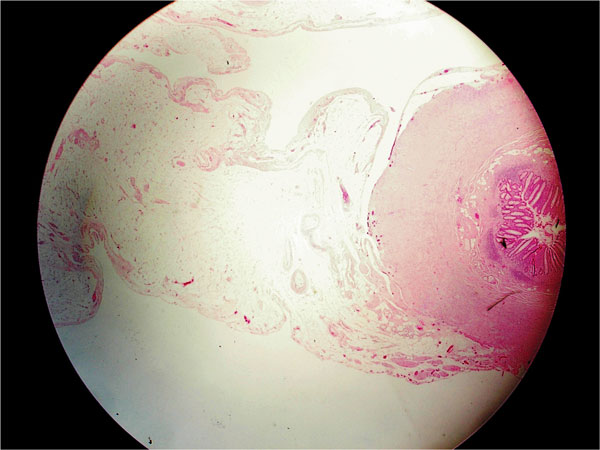 Figure 1. Microphotograph (Hematoxylin & Eosin, x 200) showing the inflamed appendix (on the right) next to vas- cular, connective and adipose tissue of spermatic cord and omentum (on the left).

The post-operative period was uneventful. The patient had wide spectrum antibiotic (Tazobactam-Piperacillin) intravenously for 4 days. The drain was removed on day 3 post-operatively and the patient was discharged home 2 days later.

The probability of an individual to have acute appendicitis at some point in his life is about 8%1. The incidence of a non-inflamed appendix within adult inguinal hernias is about 1%. The case of an inflammed, perforated appendix or periappendicular abscess within an inguinal hernia in adults is much lower and accordingly to different studies ranges between 0.13% and 1%6,7. In a 2003 study by C. D’Alia et al only one case of acute appendicitis within an inguinal hernia in 1.341 repair operations was described8.

The underlying mechanisms that can lead to acute appendicitis within an Amyand’s hernia include the reduction of the appendix’s blood supply due to adhesions that may cause non-reducibility of the hernia and compression in the external ring originating from increases in intra-abdominal pressure. These factors lead to recurrent inflammation and bacterial overgrowth1.

An Amyand’s hernia is virtually always diagnosed intraoperatively. Computer tomography can be diagnostic9, however it is rarely used due to the fact that such a hernia usually mimics either a simple reducible or an incarcerated inguinal one and is therefore admitted for elective or emergency surgery respectively, without using any prospective imaging techniques.

Unlike other inguinal hernias containing bowel that may cause ileus, an Amyand’s hernia usually appears without signs of obstruction and inflammation markers usually stay within normal range. The differential diagnosis may include strangulated hernia, Richter’s hernia, orchitis, omentocele, inguinal lymphadenitis, epidydimitis and hemorrhagic testicular tumor5.

Management should be individualized according to appendix’s inflammation stage, presence of abdominal sepsis and co-morbidity factors. The Losanoff-Basson classification presented above offers a satisfactory guidance system. Most surgeons agree that the presence of acute appendicitis (Losanoff-Basson type 2-4) within a hernia should be a contraindication for the use of synthetic meshes or plugs. However a point of disagreement is whether or not to perform an appendectomy in a case of a Losanoff-Basson type 1 Amyand’s hernia (normal appendix within inguinal hernia). The decision should be based on factors like the patient’s age, the size and anatomy of the appendix, the side in which the hernia occurs and finally the extension of the intraoperative manipulations that can by themselves trigger an inflammatory process8. In our case, a type 2 Amyand’s hernia with a perforated appendix and no signs of abdominal sepsis, we proceeded with an appendectomy through the herniotomy and a primary repair of the hernia without the use of any synthetic mesh or plug. The outcome was excellent and the patient was discharged without any complications occurring during the post-operative period.

In terms of statistical analysis, our surgical clinic provides services to a population area of 100,000. A mean of 100 inguinal hernia procedures are carried out annually. Searching our files for similar cases, we found that this was the first incident of an Amyand’s hernia and the first case of acute appendicitis within an inguinal hernia in approximately 1200 appendectomies that have been performed during the last 10 years. In other words our approximate percentage seems to be less than 0.1%, lower than these mentioned by Ryan et al and Carey et al, but approaching the result described in the study of D’Alia et al6-8.

In conclusion, Amyand’s hernia is a rare type of inguinal hernia that can sometimes lead to serious and life-threatening complications due to peritoneal spread of the septic process and should therefore be faced with utmost vigilance.