We report a case of an accessory spleen in close relation to the upper pole of the left kidney, mimicking a retroperitoneal tumor. A 58-year-old asymptomatic woman was admitted to our department for the management of a retroperitoneal mass, when the structure was incidentally discovered by ultrasound scan. The patient reported having a splenectomy at a young age, due to echinococcal disease. The computed tomography and magnetic resonance imaging confirmed the presence of a solid retroperitoneal tumor (5 cm in diameter) in the lateral aspect of the left kidney. To rule out the presence of a malignant tumor, surgical exploration was performed. The macroscopic examination of the specimen revealed a well-circumscribed encapsulated mass, which appeared to have the typical features of splenic tissue. Histology confirmed that the mass was actually an accessory spleen. The retroperitoneal accessory spleen is a rare clinical entity. However, it should always be considered, when investigating a retroperitoneal mass, especially in patients who have had previous splenectomy.

Accessory spleens are a congenital form of ectopic splenic tissue. They are relatively common and exist in 10% to 30% of the population1. They are usually asymptomatic and diagnosed incidentally by radiological examination done for other reasons. Most are located in close proximity to the normal spleen but could be present anywhere, even outside the peritoneal cavity2. Hereby, we describe the unusual case of a female patient, who had undergone splenectomy at a young age, with a hypertrophic accessory spleen mimicking a retroperitoneal tumor.

A 58-year-old healthy woman was admitted to our department for the management of a retroperitoneal tumor. The patient underwent investigation by an ultrasound scan (US) one month prior, due to atypical gastroenteritis symptoms. US revealed a hypo-echoic round mass in the upper pole of the left kidney. Based on her medical history, she reported having a splenectomy due to echinococcal disease 35 years ago. Her physical examination and laboratory findings were normal. She underwent further investigation by contrast-enhanced computed tomography (CT), where a 4.5 cm mass at the left-side of the retroperitoneal space appeared (Figure 1a). The mass enhanced homogeneously by contrast medium intake, and its density was 83 Hounsfield units. Due to the suspicion of a mesenchymatic origin tumor, a magnetic resonance imaging (MRI) was recommended by the radiologists. MRI revealed a retroperitoneal high contrast medium intake, well-marginated, solitary mass confirming the CT findings, suggesting the presence of a retroperitoneal tumor (Figure 1b).

Figure 1: The lesion in CT scan (a) exerts slightly pressure on the kidney without invasion. MRI (b)
revealing the presence of a solid, round, well-marginated mass, approximately 5cm in diameter.

Therefore, after patient consensus, she underwent open surgical exploration and excision of the mass, through a lumbar approach. A classic flank incision was made with the patient in the lateral decubitus position. A round purplish structure 5 cm in diameter was found in the retroperitoneal space. Macroscopically, the mass resembled splenic tissue and was located lateral to the left kidney, leaving Gerota’s fascia intact. It was slightly attached to the surrounding tissues. The vascular supply originated from retroperitoneal vessels independent of the splenic, renal and spermatic vessels. There was a main artery and vein, which were ligated and divided. After proper dissection, the mass was removed intact (Figure 2). There were no complications postoperatively, and the patient was dismissed in excellent condition after five days. Pathology examination revealed a 5 x 4 x 3.5 cm ovoid well-circumscribed encapsulated mass consisting of splenic tissue (Figure 3). 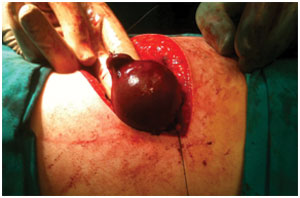 Figure 2: Surgical excision of a round, purplish, well-encapsulated mass with ligation of the main artery. 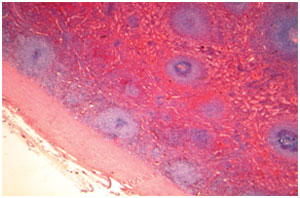 Generally, after splenectomy, two types of residual splenic tissue exist: accessory spleens and splenosis3. The presence of (usually) one accessory spleen is a congenital condition formed during embryonic development1. Splenosis, on the other hand, is acquired and occurs after traumatic or iatrogenic rupture of the spleen. It derives from auto-transplantation of viable splenic tissue throughout different anatomic compartments of the body4, which typically appear as numerous small nodules3. Another difference between the two entities is that the accessory spleen has normal splenic histology compared with splenotic tissues, where histology usually reveals distorted architecture with no hilum, a poorly formed capsule and tissue of any shape or size4.

The differential diagnosis between a retroperitoneal tumor and those cases can be confirmed only after surgical exploration. Malignant retroperitoneal tumors are more common than benign and account for approximately 0.1% of all malignancies5. Treatment includes surgical removal, and definitive diagnosis can usually be made by the pathological examination of surgical specimens2.

Therefore, in our case, after discussion of the existing problem, we proceeded with surgical exploration. The typical spleen structure in histopathology specimens proved that our case concerned an accessory spleen, which underwent compensatory enlargement after the previous splenectomy.

Ideally, in these cases, the diagnosis would be confirmed without surgical exploration, thus the patients avoid potential complications and removal of normal, functioning splenic tissue. Unfortunately, imaging by US, CT and MRI cannot provide a conclusive diagnosis, and percutaneous tissue biopsy would be insufficient in the case of cancer. Radionuclide imaging using heat-damaged Tc99m-labelled red blood cells has been proposed to be a modality of choice for the identification of ectopic splenic tissue, but a high suspicious index is required for this special investigation to be performed8,9.

This case highlights that the possibility of an accessory spleen should always be considered in the differential diagnosis when investigating a retroperitoneal mass. If there is any uncertainty in the diagnosis based on the usual imaging modalities, preoperative nuclear medicine scintigraphy could be added to the workup, at least in patients with previous splenectomy, to exclude the existence of an accessory spleen or splenosis.