Background: Clear cell sarcoma of tendons and aponeuroses is a rare, high grade malignant soft tissue tumor resembling melanoma and soft tissue sarcomas.
Clinical and Imaging Presentation: The median age at presentation is 27 years and the most common location are the foot and the ankle. MR imaging typically shows a benign looking, well defined, homogenous mass; on T1-weighted MR images, it is usually homogeneous and isointense or slight hyperintense to muscle, whereas on T2-weighted MR images, it is usually more heterogeneous with variable signal intensity.
Pathology: Microscopically, the clear cell appearance is due to the accumulation of glycogen. The cells show no or minimal pleomorphism, and paucity of mitotic figures that is in concordance with the slow-growing behavior of the tumor. Scattered multinucleated giant cells are commonly present; areas of necrosis and melanin pigment may be identified. The reciprocal translocation t(12;22)(q13;q12) is observed in more than 90% of clear cell sarcoma cases. In addition, polysomy of chromosome 8 has been observed as a secondary abnormality in many cases of clear cell sarcoma. The differential diagnosis of clear cell sarcoma should include melanoma, epithelioid malignant peripheral nerve sheath tumor, melanotic schwannoma, paraganglioma-like dermal melanocytic tumor, perivascular epithelioid cell neoplasms (PEComas), cellular blue naevus, synovial sarcoma (monophasic type), alveolar soft part sarcoma, paraganglioma, epithelioid sarcoma and carcinomas.
Treatment and Prognosis: The treatment of choice for clear cell sarcoma is wide surgical resection. If complete excision is achieved, adjuvant treatments are not unnecessary. Chemotherapy is predominantly employed in patients with metastatic disease. The 5 to 20 year survival of the patients with clear cell sarcoma range from 67% to 10%. The rates of local recurrence ranges up to 84%, late metastases up to 63%, and metastases at presentation up to 30%.

Clear cell sarcoma of tendons and aponeuroses was first described in 1965, as a rare malignant tumor originating from tendons and aponeurosis, with histological clear cell appearance due to the accumulation of glycogen1. In 1973, melanocytic differentiation was recognized by the presence of cytoplasmic melanosomes2. In 1983, the name “malignant melanoma of soft parts” was proposed due to its histological similarities to malignant melanoma3-10.

Clear cell sarcoma accounts for less than 1% of all soft tissue tumors1-4,16-25. The tumor is typically a relatively small (<5 cm), deep soft tissue lesion, often juxtaposed to tendons, fascia, or aponeuroses1,3,17,18,26. It is more prevalent in Caucasians than in African Americans or Asians, without any gender predilection17,21,26. Patients’ age at its presentation ranges from 7 to 83 years (median 27 years), with 2% occurring in children younger than 10 years3,14. The most common location are the foot and the ankle; other sites in the skeleton as well as location at the penis, retroperitoneum, kidney and gastrointestinal tract have also been reported14,24,27-33. Clear cell sarcoma of bone can be primary and metastatic (Figure 1)34-37. The distinction between clear cell sarcoma and melanoma, especially in metastatic presentation of an unknown primary tumor, often creates diagnostic challenge25. 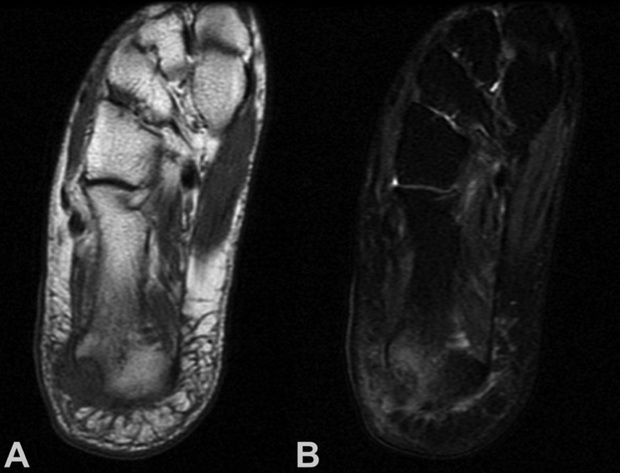 Figure 1: A 40-year-old woman with pain at the right calcaneus. Coronal (A) T1-weighted MR image showing a isointense to muscle lesion. involving the calcaneus with soft tissue mass; (B) T2-weighted MR imaging showing heterogeneity of the lesion with foci of hypointensity. Biopsy showed clear cell sarcoma. Wide resection with partial calcanectomy and local flap wound coverage was done, without evidence of local recurrence or distant metastases 3 years after diagnosis and treatment.

Radiographs are usually reported as normal as intratumoral calcifications are rare26,38,39. Computed tomography (CT) (Figure 2) and magnetic resonance (MR) imaging typically show a benign looking, well defined, homogenous mass38-40. On T1-weighted MR images, it is usually homogeneous and isointense or slight hyperintense to muscle, whereas on T2-weighted MR images, it is usually more heterogeneous with variable signal intensity41. Foci of hypointensity may be present, corresponding to melanin and iron38,41. 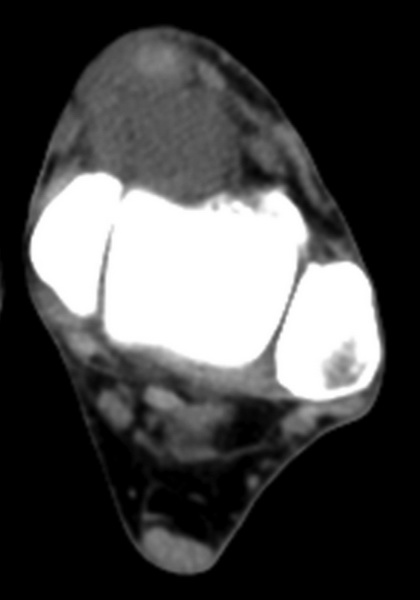 Macroscopically, clear cell sarcoma is a tan-grey, firm, circumscribed mass10. Microscopically, the tumor is highly infiltrative and haphazardly organized into small compact nests and fascicles of neoplastic cells dissecting along the dense fibrous connective tissue of tendons, fascia, and aponeuroses. Biphasic differentiation is absent1,4,42. The cellular nests are divided into lobules by a fine fibrocollagenous framework of variable thickness that is contiguous with the fibrous connective tissue of the adjacent tendons and aponeurosis1,3,15. The neoplastic cells are polygonal to fusiform, with clear or pale, eosinophilic to amphophilic cytoplasm and have centrally located uniform, round to ovoid vesicular nuclei with prominent basophilic nucleoli, similar to melanoma. The clear cell appearance is due to the accumulation of glycogen. The cells show no or minimal pleomorphism, and paucity of mitotic figures that is in concordance with the slow-growing behavior of the tumor. Scattered multinucleated giant cells are commonly present; areas of necrosis and melanin pigment may be identified1,3,10,15,18,25,42-45

Immunohistochemically, clear cell sarcoma shows a phenotype identical to that of conventional melanoma characterized by strong S100 protein expression in 100% of cases, and expression of HMB-45, Melan-A and MiTF in 97% to 81% of cases25. It may also expresses neuroendocrine and/or nerve sheath-related markers, including synaptophysin, CD56 and CD57 in 21% to 75% of cases; CD34 is generally negative25. Rarely, clear cell sarcoma may show anomalous expression of epithelial markers, including cytokeratins and epithelial membrane antigen.

The reciprocal translocation t(12;22)(q13;q12) is observed in more than 90% of clear cell sarcoma cases, with chromosome analysis, reverse transcriptase polymerase chain reaction (RT-PCR), and fluorescent in situ hybridization (FISH)11. This translocation results in fusion of a portion of the Activating Transcription Factor gene (ATF-1) on the long arm of chromosome 12 (12q13) and the Ewing’s sarcoma oncogene R1 (EWSR1) on chromosome 22 (22q12)11,13,22,25,30,33,46-49. Four types of EWSR1/ATF1 fusion have been identified49, and one type of EWSR1/CREB1 fusion, presumably representing the translocation t(2;22)(q32.3;q12)8,25,49. Recently, it has been shown that the EWSR1/ATF1 fusion protein is capable of binding to and activating the melanocyte-specific microphthalmia-associated transcription factor (MiTF), which in the presence of the sox10 transcription factor, results in expression of the melanocytic phenotype and regulates the growth/survival of clear cell sarcoma cells50.

In addition to the diagnostic t(12;22)(q13;q12) translocation, polysomy of chromosome 8 has been observed as a secondary abnormality, in many cases of clear cell sarcoma46,51,52.

Compared to melanoma, clear cell sarcoma occurs in much younger patients, is deeply located, associated with tendons or aponeuroses, lacks epidermal involvement, tends to display less cellular pleomorphism, and may contain Touton-type neoplastic giant cells; these features are unusual for melanoma. In contrast, a primary cutaneous nodular melanoma is usually a dermal-based tumor that tends to be more pleomorphic and mitotically active, than clear cell sarcoma. Molecular genetic studies, for the EWS/ATF1 or EWS/CREB1 fusions, are required for definitive diagnosis8,11-13.

Malignant peripheral nerve sheath tumor is usually associated with a large peripheral nerve or neurofibromatosis, and is characterized by significant myxoid stroma, hyperchromatic nuclei, brisk mitotic activity, and negativity for HMB-45, melanocytic markers and cytogenetic abnormalities10. Melanotic schwannoma most often occurs in patients with Carney syndrome, in paraspinal or nerve plexus-related location, and frequently contains psammomatous calcifications and very abundant melanin pigment15. In contrast to clear cell sarcoma, paraganglioma-like dermal melanocytic tumor is primarily a tumor of the extremities of females, presents as a dermal nodule, and it has distinct histological appearance and absence of EWS gene cytogenetic abnormalities53.

Perivascular epithelioid cell neoplasms commonly arise within the abdomen of young patients with predilection for the falciform ligament and ligamentum teres of the liver, and are characterized by fascicular and nested proliferation of uniform spindle cells, less prominent nucleoli and lack of multinucleation, and expression of smooth muscle actins and melanocytic markers in immunohistochemical studies10,54. Cellular blue naevi lack cytological atypia, frequently grow in a dumbbell-shaped configuration and are negative for the EWS-ATF1 gene fusion15. Synovial and epithelioid sarcomas, and carcinomas lack the distinctive nested growth pattern of clear cell sarcoma, and express cytokeratins, but not S100 protein10,15.

The treatment of choice for clear cell sarcoma is wide surgical resection14,21,24,55-57. If complete excision is achieved, adjuvant treatments are not necessary57. Amputation is not justified, unless there is vascular or neural impairment of the limb, as the survival is similar to that of wide resection19,56. Intralesional or marginal excision is associated with high local recurrence rates (Figure 3)21. In case of close resection margins, postoperative radiation therapy is indicated to improve local tumor control26,55,56.

Figure 3: A 47-year-old woman with pain and a palpable mass at the plantar aspect of the right forefoot. She had marginal resection for clear cell sarcoma at this location 9 years before. (A) Sagittal T1-weighted MR image showing a isointense to muscle lesion. (B) Coronal T2-weighted MR image showing a relative hyperintense to muscle lesion. Biopsy showed recurrent clear cell sarcoma. Wide resection and local flap wound coverage was performed without evidence of local re-recurrence 2 years after diagnosis and treatment of the recurrent tumor.

Chemotherapy is predominantly employed in patients with metastatic disease14,17,21,24,55,57,58. Doxorubicin-based chemotherapy has not been effective21,26,57. In contrast, cisplatin-based chemotherapy and caffeine-assisted chemotherapy with doxorubicin and cisplatin, may elicit a tumor response, especially in patients with metastatic disease, or tumors more than 5 cm in maximum diameter24,59. Complete local response after isolated limb perfusion60, and intralesional injection of interferon alpha 2B has also been reported58.

Ten to 14% of patients with clear cell sarcoma will develop regional lymph node metastasis; the majority of these patients will develop distant metastasis, most often to lung and bone1,3,14,18-21,24-26. Although lung metastasectomy is not recommended due to the aggressive clinical course of the metastatic disease, the role of therapeutic lymphadenectomy for locoregional disease control is unclear3,14,55,57,61. Most authors suggest regional lymphadenectomy, only in case of clinically and fine needle aspiration (FNA) cytologically confirmed regional lymph node involvement55,57,61. Early detection of occult regional lymphatic metastases by lymphatic mapping using lymphoscintigraphy and blue dye, and sentinel lymph node biopsy (SLNB) may improve staging of the regional disease, and guide the extent of surgery and decision for adjuvant treatments62.

Prognostic factors in patients with clear cell sarcoma are tumor size, site, necrosis, mitoses, DNA content, and resection margins18,19,21,26,57. Tumors <5 cm are much less likely to recur or metastasize, whereas those >5 cm are more commonly associated with metastatic disease18-22,24-26. Probably, patients with tumors >5 cm have micrometastases at diagnosis24. Focal or diffuse tumor necrosis also correlates with a worse prognosis, independent of tumor size19. Lymph node metastasis is also associated with a poor prognosis, since patients with regional metastasis eventually will develop distant metastasis1,18,19,26.

Clear cell sarcoma is a rare highly malignant soft tissue tumor, which resembles melanoma and soft tissue sarcomas. Wide resection is the treatment of choice. Adjuvant radiation is required if resection is close to resection margins; the role of chemotherapy is unclear. Long-term follow-up is necessary because of late local recurrences and regional lymph node or distant metastases.

Authors declare no conflict of interest